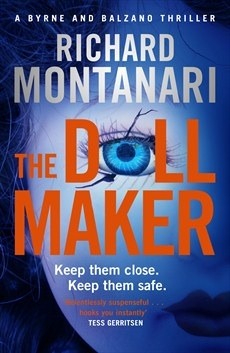 Richard Montanari
was born in Cleveland, Ohio, to a traditional Italian-American family. After university, he travelled Europe extensively and lived in London, selling clothing in Chelsea and foreign language encyclopedias door-to-door in Hampstead.

Returning to the US, he started working as a freelance writer for the
Chicago Tribune,
the
Detroit Free Press,
the
Seattle Times
, and many others. His novels have now been published in more than twenty-five languages.

First published in Great Britain in 2014 by Sphere

Lyrics to ‘Wall of Dolls’ by Golden Earring reproduced with kind permission of Barry Hay.

All characters and events in this publication, other than those clearly in the public domain, are fictitious and any resemblance to real persons, living or dead, is purely coincidental.
All rights reserved. No part of this publication may be reproduced, stored in a retrieval system, or transmitted, in any form or by any means, without the prior permission in writing of the publisher, nor be otherwise circulated in any form of binding or cover other than that in which it is published and without a similar condition including this condition being imposed on the subsequent purchaser.
A CIP catalogue record for this book is available from the British Library.

This is the wall of dolls,

Look at them all my friend,

You’ll be one of them in the end.

He knew the moment she walked in.

He remembered her from Raleigh, from Vancouver, from Santa Fe. She was no one he recognized. She was every woman he’d ever met.

The bar was long and U-shaped. He was seated on one of the short sides, next to the wall, his right shoulder against the paneling. This helped to hide from the world the large scar on his right cheek. As little as he cared about anything, he was still self-conscious about his scar, a present from his father and a Mason jar of moonshine. Besides, with one shoulder to the wall, he was always protected from that flank.

The bar was almost empty. It smelled of overcooked fish and Mr Clean.

The woman sat two stools to his left, leaving an empty seat between them. As she dropped her purse to the floor, wrapping the strap around an ankle, the juke spun a new song, a tune by Lynyrd Skynyrd. Or maybe it was the Allman Brothers. He wasn’t big into seventies southern rock. Oddly enough, considering his job, he didn’t care much for music at all. He enjoyed the silence. There was precious little of it these days.

It was clear that the woman expected him to summon the barkeep, offer her a drink. When he didn’t, she did. The barman took his time. Had she been ten years younger, or five years prettier, the barman would have flown.

When he finally made his way down the bar the woman looked over, giving it one more chance. When she looked back she said, simply:

The barman dawdled, returned, slid a napkin onto the bar in front of the woman, put down the watery cocktail, waited. The woman picked up her bag, then fished out a rumpled twenty, dropped it onto a wet spot – a spot the barman, if he’d given a shit, would have wiped down.

The man made an elaborate process out of straightening out the wet bill. Eventually he came back with the change. All singles. He dropped them into the puddle on the bar.

He wished he had time to deal with the bartender.

Two songs later the woman slid one stool to her right, uninvited, bringing her almost empty drink with her, rattling the cubes.

‘What’s your name?’ she asked.

He glanced over, got his first good look. Her eye shadow was electric blue, her lipstick far too red for a woman her age, which he pegged at forty-five, maybe more. She looked like a woman who slept in her makeup, only bothering to wash her face when she took that infrequent shower. Her foundation spackled a landscape of acne scars.

She looked surprised. They always did.

She smiled. She shouldn’t have. It ruined what little about her face there was to like. In it he saw every regret, every Sunday morning, every gray towel and yellowed bed sheet.

But this was still Saturday night, and the lights were low.

‘You got as much
money
as Mick Jagger?’ she asked.

She leaned closer. Her perfume was too sweet and too heavy, but he liked it that way.

‘How much is enough?’ she asked.

‘Enough for the night.’

Something lit her eyes. It helped. Maybe she wasn’t so banged up after all, despite the fact that she was turning tricks in a hole like this. He nodded at the bartender, dropped a fifty on the bar. This time the barkeep was prompt. Odd, that. In a flash he was back with refills. He even wiped down the bar.

‘But can you
go
all night, that’s the question,’ she said.

She laughed. Her breath smelled of cigarettes and Altoids and gum disease.

It doesn’t matter what you like
, he thought.
It hasn’t mattered for more than twenty years.

She drained her Seven and Seven, tapped her plastic nails on the bar. She turned to face him again, as if the idea had just come to her. ‘What do you say we buy a bottle and go have some fun?’

He glanced over. ‘
We?
You pitching in?’

She gave him a gentle slap on the shoulder. ‘Oh, stop.’

‘Is that an invitation?’

‘Sounds like a plan,’ she said. She slipped off the stool, toddled a bit, grabbed the rail to steady herself. These were clearly not her first two drinks of the evening. ‘I’m just going to visit the little girls’ room. Don’t you
dare
go anywhere.’

She flounced to the far side of the bar, drawing meager attention from the two old codgers at the other end.

He finished his beer, picked up the bills, leaving the barkeep a thirty-nine cent tip. It didn’t go unnoticed.

They stepped into the cold night air.

‘Where’s your truck?’ she asked.

He pointed to the footpath, the trail that snaked through the woods. ‘Through there.’

‘You’re parked in the rest area?’

She looked at her shoes, a pair of cut-rate white heels, at least one size too small. ‘I hope the path ain’t muddy.’

She slipped an arm through his, the one opposite his duffel. They started across the tavern’s small parking lot, then stepped into the woods.

When they got to the halfway point, far from the lights, he stopped, opened his duffel, took out a pint of Southern Comfort.

He uncapped the bottle, took a drink.

‘Open your mouth and close your eyes,’ he said.

She did as she was told.

He looked at her standing there, in the diffused moonlight, her mouth pink and gaping. It was how he planned to remember her. It was how he remembered them all.

At precisely the same instant he dropped the razor blade into her mouth, he poured in a third of the bottle of Comfort.

The steel hit first. The woman gagged, choked, bucked. When she did this the blade shot forward in her mouth, sliced through her lower lip.

He stood to the side as the woman coughed out a gulp of blood and whiskey. She then spit the blade into her hand, dropped it to the ground.

When she looked up at him he saw that the razor had sliced her lower lip in half.

Because of her destroyed mouth it came out
whan nin you noo
? But he understood. He always understood.

When he pushed her into a tree, she slumped to the ground, gasping for air, hacking blood like some just hooked fish.

He circled her, the adrenaline now screaming in his veins.

He dropped to the ground, straddled her.

‘If I did that, I’d be fucking everyone you’ve ever been with.’

He leaned back to admire his work, grabbed the bottle, downed some Comfort to ward off the chill. He took his eyes off her for a second, but it was long enough.

Somehow the razor blade was in her hand. She swiped it across his face, cutting him from just below his right eye to the top of his chin.

He felt the pain first, then the heat of his own blood, then the cold. Steam rose from his open wound, clouding his eyes.

He slapped her across the face. Once, twice, then once more. Her face was now marbled with blood and phlegm. Her ruined mouth was open, her lower lip in two pieces.

He thought about taking a rock to her skull, but not yet. She’d cut him, and she would pay. He killed the bottle, wiped it clean, tossed it into the woods, then ripped off her tank top, used it to sponge his face. He reached into his duffel.

‘That is one nasty cut,’ he said. ‘I’m going to close that wound for you. There’s all kinds of bacteria out here. You don’t want to get an infection, do you? It wouldn’t be good for business.’

He pulled the blowtorch from his bag, a big BernzOmatic. When she saw it she tried to wiggle out from under him, but her strength was all but sapped. He hit her in the face again – just hard enough to keep her in place – then took a lighter from his pocket, lit the torch, adjusted the flame. When it was a perfect yellow-blue point, he said:

Nothing. She was going into shock. He brought the flame closer to her face.

He went to work on her lip. Her dying screams were swallowed by the sound of the blowtorch. The smell of charred flesh rose into the night air.

By the time he reached her eyes she was silent.

The clouds had pulled away from the moon by the time he emerged from the woods, the quarter-mile pass-through that led to the rest area where he had parked.

When he had parked his truck, earlier in the day, he had positioned it as close to the path as he could. There had been three other rigs closer, but he figured he was near enough.

The other trucks were now gone.

Before stepping into the sodium streetlights of the massive parking lot – which held a fueling station and an all-night diner – he looked at his clothes. His jacket was covered in blood, large patches that appeared black in the moonlight. He took off his down jacket, turned it inside out, put it back on. He picked up a handful of leaves and wiped the blood from his face.

A few moments later, when he came around the back of the diner, he saw a woman standing there. She saw him, too.

It was one of the diner waitresses, standing by the back door, her powder blue rayon uniform and white sweater looking bright and clean and sterile under the sodium lamps. She was on break, using an emery board, sanding her nails.