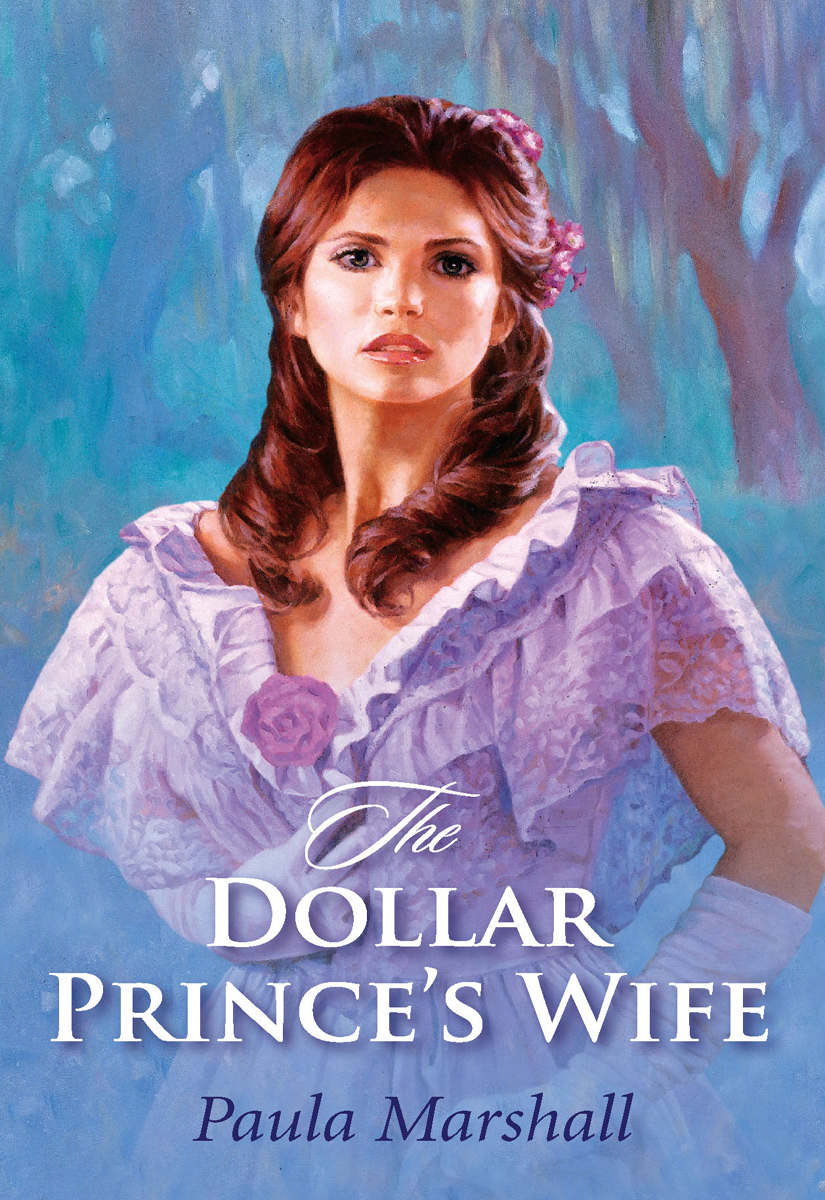 âI cannot believe that I have changed so much in a month,' Dinah exclaimed.

âYes, you have changed, more than I could have hoped,' Cobie replied. âBecause you were loved and cared for.'

â
You
have not loved or cared for me.' There was almost accusation in her voice.

âNo?' he queried. So much of what Madame had done, had been done because of his instructions.

The new
savoir faire
which Dinah had learnedâand was still learningâinformed her that, if she wished, she could make him hers at any time, whenever she pleased.

At the top of the stairs she saw the pair of them in a large gilt-framed mirrorâand gasped. She was prepared for her husband's splendor. Evening dress became him as nothing else did. But she was not prepared for the sight of herself.

She was his complement in every way. The girl who had hunched her shoulders and bent her head, lest the world look her in the face, had gone.

âYes,' Cobie said in her ear. âWe go well together, do we not?'

Some years ago I did a great deal of research on the lives of those men and women who, for a variety of reasons, lived on the frontiers. Re-reading recently about life in Australia in the early nineteenth century, it struck me that an interesting story about them was only waiting to be told. Having written HESTER WARING'S MARRIAGE, it was a short step for me to wonder what happened to the children and the grandchildren.

Hence
The Dilhorne Dynasty,
each book of which deals with a member of the family who sets out to conquer the new world in which he finds himself. The Dilhornes, men and women, are at home wherever they settle, be it Australia, England or the United States of America, and because of their zest for life become involved in interesting adventures.

married with three children, has had a varied life. She began her career in a large library and ended it as a senior academic in charge of history in a polytechnic. She has traveled widely and has been a swimming coach. She has always wanted to write, and likes her novels to be full of adventure and humor.

#186 A MOST UNSUITABLE BRIDE
Gail Whitiker

âWhat I tell you three times is true.' Lewis Carroll

L
ady Dinah Freville, the unconsidered half-sister of Violet, Lady Kenilworth, who always spoke of her in the most cavalier manner possible, was being equally cavalier in referring to her.

âI really don't want to leave you, Mama. You know how much I dislike staying with Violetâand how much she dislikes having me.'

She was staring through the window of the small dining room in her mother's cottage in Somerset. Her mother, the widow of the late Lord Rainsborough, elegantly dressed in a loose silk Liberty gown of many colours, was busy with her canvas work.

She eyed the flowers she was stitching, yawned, and said gently, âI know, I know, but you can't stay with me, my love. By my husband's will, now that you're eighteen, your guardianship will pass from me to your brother, and since he is still unmarried he has decreed that Violet will take
you over and arrange for you to be presented at court. With luck, she will also arrange a suitable marriage for you. I can't keep you here with me, however much I might wish to do so.'

Dinah's frown grew. âI don't want to live with Violet, I don't want to be presented at court. I dislike the idea of the whole wretched business. I would much rather live with Faa if I can't stay with you.'

âOh, that wouldn't do at all!' exclaimed her mother. âAnd I do wish that you wouldn't call Professor Fabian Faa. You're not supposed to know that he's your father.'

âI object to that too,' returned Dinah mutinously. âSuch hypocrisy! At least now that Lord Rainsborough is dead I don't have to pretend that
he
's my father any more.'

âViolet,' observed her mother, âthinks that you are a docile, spiritless child. I sometimes wish that she knew what you're like when she's absent. Does she really have such a dampening effect on you, my darling?'

Dinah spun round, turning to face her mother at last. âYou don't mind being in exile because you once weren't, because once you had a name and a place, but I'm nobodyâno, worse than nobody. I haven't even a proper name, and every time I look at Violetâor anyone else from her worldâI always know what they're thinking. “That's the one, the child whose existence ruined Charlotte Rainsborough who bolted with Louis Fabianâand didn't even stay bolted with him once her child was born.”'

She suddenly fell silent, half-ashamed of her own vehemence. She looked at her mother's placid face. âWhy don't you stop me when I'm being wicked, Mama?'

âOh, no, dear, much better to get it out of your system, as Nursie used to say.'

âOh, no, once Rainsborough refused to divorce me it would have ruined poor Louis if I had stayed with him. I had no money of my own to keep him. No, Louis and I had our fun, one splendid summer, and then he could go back to being an Oxford don, and I was only too happy to be Rainsborough's exiled wifeâmuch better than having to live with him.'

She fell silent, contemplating that long-ago year when she had had a passionate affair with the young man who had been brought to Borough Hall to tutor her indolent son before he went to Oxford.

No, she told herself firmly, no, I won't think of the life Dinah and I might have had if Rainsborough hadn't played dog in the manger, roaring at me that dreadful day, âBy God, Charlotte, if I can't have you, neither shall he. I'll be damned if I divorce you, and if you still run to him I'll see him ruined, and he shan't have the child, either. He, she, it, will be mine, will take my name, and be damned to the pair of you!'

No, she couldn't ruin Louis, so she had accepted her husband's terms, and her daughter Dinah was now Lady Dinah, who might have been a nameless bastard otherwise. But Rainsborough had taken good care that everyone knew the child's sad history. Both her half-brother, who was always called Rainey, and her half-sister Violet, now married to Lord Kenilworth, but also the latest mistress of Edward, Prince of Wales, were hardly subtle in their constant, unkind reminders that she was only one of them by grace and favourâ¦

Dinah plumped down on her knees and gently took her mother's hand in order to stroke it lovingly. âThe grand
passion which only lasted six months. Is that how long all grand passions last, Mama?'

âYes, if you like, Dinah.' What else could she say?

âTo my pleasure, yes. And now I must give you up. And do forget all this nonsense about having no name. Too middle class! My husband acknowledged you. You are Lady Dinah Freville, and the world accepts you as that. You aren't the only one, you know.'

âYes, I do know that, Mama. And it doesn't comfort me. What would comfort me would be to go to Oxford, to live with Faa and be an undergraduate at Somerville College. But I can't have that, can I?'

âNo, my darling, we've had this out again and again. It's imperative that you go to live with Violet, make a good match and be settled in the world. You haven't time to play at being a scholar.'

âFaa says that I could do more than play at it, Mama. He says that I have a good mind.'

âDon't think about that, my dear. You know very well how little money Rainsborough has leftâmy late husband spent it all on high livingâand so your brother can't afford to let me have more than a pittance. You won't even have much of a dowry, and without a reasonable marriage you will be penniless. Just thank God that you're not like someâthrown out to starveâand me, too.'

Dinah began to prowl restlessly around the room, avoiding her own image in the mirror facing the windows. She was ready at last to say the unsayable, the stark truth which her mother always avoided, but which Violet was constantly throwing in her face.

âWho in the world is ever going to offer for me, Mama?
I'm not like you or Violet. I have no looks and no light conversation.'

She was only too well aware of her own limitations. She was neither blonde, nor pretty. She was dark and slender, with no bust, she told herself despairingly, and precious little in the way of hips. Nothing about her was at all like the voluptuous women pictured in fashion plates and in the picture postcards of society beauties sold in every newsagent's shop.

âThe fashionable clothes of the day aren't meant for me, either. They stifle me. They're meant for buxom, blue-eyed girls with ringlets, not a thin brown girl with raven hair and dark eyes.

âAnd since I shan't have a decent dowry, either,' she ended ruefully, âthere's no fear, at least, that anyone will want to marry me for my money!'

âDear, dear,' yawned her mother. âWe have had this conversation so many times before. Sing another song, darling.'

âOh, I know I never sing the right oneâand certainly I shall never be able to sing one which will please Violet. Please God that now that she's taken up with the Prince of Wales she won't have any time for me.'

She looked thoughtfully at her daughter. For a moment there when she had spoken of Violet and the Prince her face had become animated, had glowed, had suddenly revealed quite a different person, a person of character and passion. It was as though the Dinah of the future had been superimposed on the Dinah of the present before disappearing again.

If she could look like that more often, then perhaps the child might attract someone who could see beyond the ob
vious, beyond the fashion plates and the picture postcards of society beauties, might even recognise her bright spirit, free it, and allow it to soar into the heavens.

Charlotte Rainsborough shook herself. Goodness, what brought that on? She said prosaically to her daughter, âOne last thing, my dear, you will be careful when Violet takes you into society. There are those who prey on young things like yourself.'

âOh, no need to worry about that,' replied Dinah, her face alight with amusement. âI'm sure that I'm most unlikely to attract either predators or pussy cats. As well imagine I could seduce the Prince himselfâor any other of her loversâaway from Violet, or attract any of the men around them. Besides, you're always telling me that men don't like women who argue with them, so I shall know how to put off anyone whom I dislike.'

That last statement ended their discussion. Her mother shook her head at her, tea came in, and visitors, and for a time Dinah was able to forget her future. A future in which she would be sent off, like a parcel, to Violet's grand home, Moorings, to be groomed for the Season where she would be inspected, and almost certainly passed over, before she could retreat into private life again.