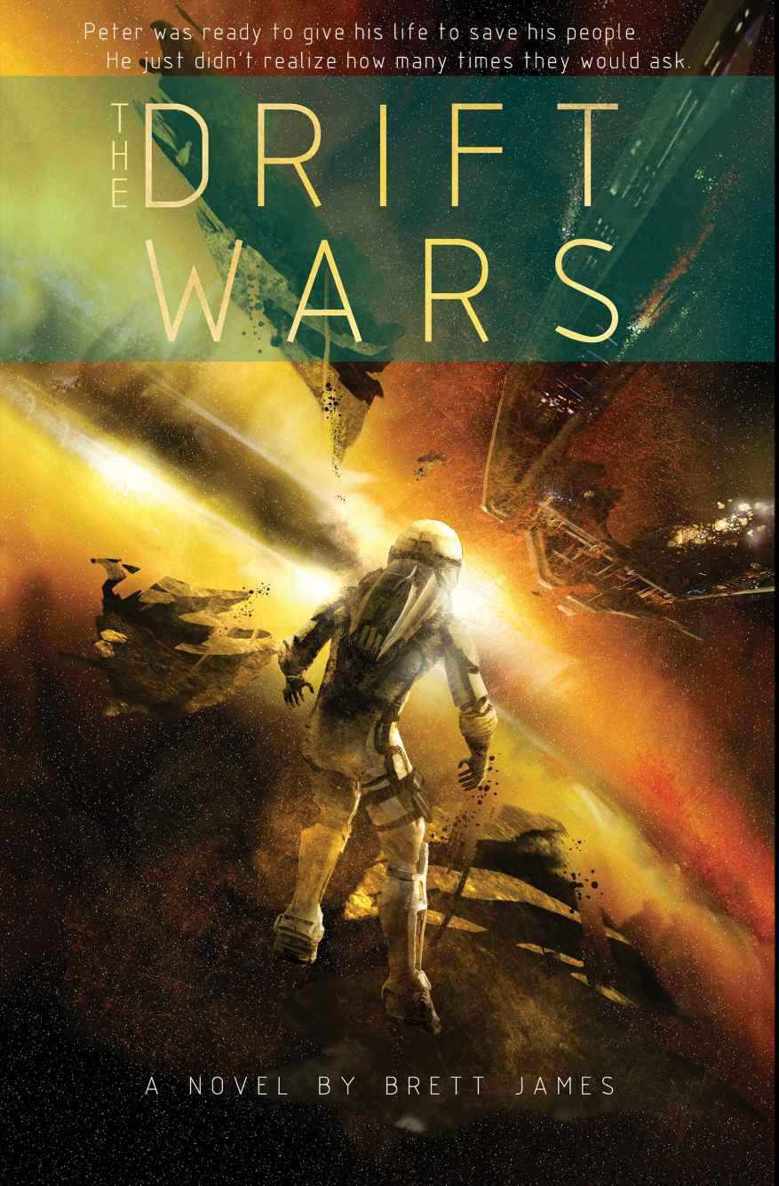 Science fiction plucks from within
us our deepest fears and hopes
then shows them to us in rough
disguise: the monster and the rocket.

Truth's a menace, science is a public danger.

“No
recon!” Saul’s voice was barely audible over the metallic
vibrations of the ship. After three hours of traveling through the
eerie calm of space, the ship had slapped against the planetary
atmosphere and was skipping violently. In a few moments, Peter would
make his first combat jump. He hoped it would go better than in
training. His helmet still smelled faintly of vomit.

The
cabin was sweltering; the hull glowed from the friction of
atmospheric entry. The ship’s engine screamed, pushing them even
faster.

The
hull was 95 percent effective at these speeds—it would fail one
time out of twenty, vaporizing the ship and its passengers. This
would be unacceptable in civilian spacecraft. Only marine transports
played such odds.

“You
ever heard of a drop with no recon?” Saul yelled over a closed
channel.

“No,”
Peter shouted into his helmet mic.

“Me
neither. I bet no one lives to talk about it.”

Peter
knew better than to let Saul psych him out. “Command put the
satellites on the other side of the planet,” he yelled back.

“Smart
is being tucked away in the commandship,” Saul shouted. “I don’t
see any generals lined up for this drop.”

“Dispersal
altitude,” the captain said over the intercom. He was calm and
relaxed, piloting the ship from ten thousand miles away.

Men
stirred throughout the cabin, prepping weapons and themselves. The
ship held a full regiment: twenty-four hundred men in ash-gray
combat suits packed in shoulder-tight rows along the curved floor.
They were all recruits, privates on their first mission. Their suits
shone like they had been made this morning—all but one, that of
Colonel Chiang San, who watched his men from a raised seat up front.
His suit was dulled and chipped from use, and even though they were
inside, the protective silver coating was down over his visor,
masking his face.

Anonymous
in the crowd, Peter pressed his hand to his chest, where, beneath
his suit’s hard crust, hung a locket containing a curl of soft,
silky hair.

Saul
started to speak, but the ship’s floor fell away and wind roared
through the cabin. The men, clamped in by the backs of their suits,
were rotated to face the green world below. It was drawn with the
clarity of distance—the sharp-edged mountains and lakes, and an
ocean of jungle as soft as cotton.

The
clamp behind Peter snapped open, and a blast of compressed gas shot
him straight down. The other men disappeared in a blur.

Six
transports screamed through the white sky overhead, their massive
impulsor engines burning the air in a trail of roiling orange and
black. They spit out fifteen thousand marines in five seconds,
staggered just enough to avoid collision, then arced back toward the
safety of space. The sky was poked with little black dots—men
plummeting to the surface.

The
first time Peter tried out for football, the varsity players took
the hopefuls out for a little bonding session. Several jugs of fiery
moonshine were passed around, and then the young players, mostly
freshmen, were taken to Culiver’s Gorge. The gorge had a high dirt
bank that overlooked murky, green-coated water. A narrow iron pipe
crossed between the banks some fifteen feet over the water. The
hopefuls were told that the unwritten requirement to make the team
was to walk the pipe, blindfolded. They didn’t want to, but the
older boys insisted.

As
his classmates hemmed and hawed, Peter stepped to the front. He
figured that since he couldn’t get out of it, he might as well try
to look enthusiastic. He was blindfolded, balanced on the pipe with
drunken steadiness, and then pushed forward. He managed two wobbly
steps before he went over the edge. Though terrified, he kept his
mouth shut as he fell through the air and flopped into the water.

Not
one of them made it across, but Peter was the only one who didn’t
scream when he fell. Back then, that was brave. Back then, walking
blindfolded across a water pipe was scary.

Now,
plunging through the high atmosphere of an enemy-occupied planet, he
knew that while the stakes were higher, the setup was the same: no
matter how scared he felt, there was nothing to gain by showing it.
Screaming wouldn’t bring the ship back; it would only make him
look bad.

Peter
fell freely at first, but as he descended the atmosphere thickened,
pushing his arms and legs backward, and pressing against his chest
as he slowed to terminal velocity. Frost crystals formed around the
edge of his visor, and the wind settled to a dull rush. He brought
his legs together, drew his arms to his side, and angled into a
dive.

The
green world approached rapidly, its topography rising as his angle
lowered. Red lines drew out over his visor, the computer in his suit
marking the target landing area.

He
felt a jolt as he punched into the lower atmosphere, and a red light
flashed in the corner of his visor: incoming fire. Below him, the
green jungle faded under a gray cloud of bullets that rose to meet
the men.

Peter
angled his hands like fins, corkscrewing. He wiggled his fingers,
weaving his body randomly and crisscrossing through the other men,
who were all doing the same.

Something
crashed into his back, knocking him end over end. He flailed,
slapping at the air, but that only made it worse. Then his training
clicked in: he tucked his arms in tight and fanned his legs to drag
at the air, angling him back into his dive.

Peter
was breathing hard and trembling with adrenaline. Sideways
collisions were expected during evasive maneuvers, he reminded
himself. Even at this speed, they were nearly always harmless.

He
looked up and saw Saul flying overhead, an enormous white grin
beaming through his visor. Saul had hit him on purpose. Saul was
like that. Playful—bored even—no matter that they were
plummeting into hostile territory at three hundred miles an hour.
Peter had grown used to this attitude back in Basic Training—five
intensive months meant to hone men into deadly weapons. Frankly,
they’d had much greater success with Saul than Peter.

Peter
turned back to the incoming storm of bullets, forcing himself to
relax.
Just like falling into the river
, he told himself. Of
course, he didn’t make the team that year. He might have impressed
the older kids, but they didn’t decide who made the cut.

Moments
later the cloud of bullets collided with the swarm of men. Most of
the bullets rattled harmlessly against the heavy armor on the
marines’ shoulders and helmets; they had spent most of their power
on the long climb up. The bullets were mainly intimidation anyway,
broadcasting the size of the force waiting below. But they also
provided cover for the rockets that followed.

Thunder
came from all sides and great orange fireballs filled the sky,
shattering the unlucky and knocking around the rest. The explosions
came one after another, their black smoke choking out the light.
Someone—or some part of someone—struck Peter’s shoulder and
ricocheted away.

Sergeant
Mickelson had advised them to have some sort of distraction on hand
for the dive. Loud music, particularly metal, would drown out the
noise of battle and pass the time. “Pornography is even better,”
he said, “but it’s against policy, so don’t let me catch you.”

Neither
idea appealed to Peter, so he hadn’t brought anything. Instead, he
tried to think about home, and about Amber. It had been seven months
since he’d seen her, seven months since he’d felt her arms
around him. His memory of her had been his strength, but he couldn’t
bring it up. Not while he was careening though the thick smoke and
dull pounding of rockets, wondering if the next one was meant for
him.

Having
no other distraction, he started to hum.

The
explosions stopped. Peter dropped below the smoke and saw only the
plush treetops as he crashed into them. A charge on his back fired
with a loud bang, flipping him upright. His rocket pack roared to
life, its long flame licking his feet as it strained to slow his
descent.

The
leafy canopy closed overhead, sealing Peter into a murky world of
long, spidery tree trunks. As Peter strained to pick a clear landing
site, a leg-thick tree branch caught him square in the chest. He was
knocked over and his rocket drove him straight at the ground. His
suit’s stabilizers tried to right him but, designed for the
weightlessness of space, lacked the power.

His
rocket sputtered out thirty feet from the ground; he slammed into it
headfirst.

The
jungle floor was thick with leaves, cushioning Peter’s fall and
sparing him serious injury or death—effectively the same thing
this deep inside enemy territory. He scrambled out of the crater
made from his own impact, ran for the cover of the nearest tree, and
tucked himself into a protective ball. Shrapnel and debris drummed
the ground. It tapered off after several minutes. He eased to his
feet and looked around.

The
trees were as straight as pencils, their white cabbagey trunks
rising a hundred yards into the air, then sprouting into a green
roof. Down at ground level, the trunks split and tangled together.
Low scrub, like moss magnified a hundredfold, circled the trees in
wreaths, wisps of steam billowing off their crowns. In the dim
light, the wet ground was the color of blood and dented by
debris—parts of rockets, parts of men.

Alone
in the jungle, Peter felt exposed; the enemy seemed to lurk in every
shadow. He retreated further into the tree, ducking into the cave of
its high roots, and waited.

It
was fifty long seconds before the satellites moved into place.
Peter’s visor lit up with information, and he studied the
translucent map that appeared in the corner. There were blue dots to
indicate the other marines, but no red dots yet—the satellite’s
sensors couldn’t detect the enemy through the thick foliage. It
fell on the marines to dig them out here on the ground.

Peter’s
regiment was spread over several dozen miles, and he was a thousand
yards from the nearest friendly. The rendezvous point was a mile and
a half away, labeled by a green circle. He did a quick visual
inspection of his suit, then tested his arms and legs. The
artificial muscles in his suit whirred smoothly.

Everything
seemed okay. He drew his sidearm and crept out from his cover.

The
thick foliage cast dark shadows in the haze, providing the enemy
ideal camouflage for an ambush. The jungle was dead quiet, with no
sign of the indigenous otter-like creature that supposedly thrived
there. Maybe they were hiding from the coming battle. Or maybe they
had been slaughtered.

Fog
condensed on Peter’s visor, making beads of water that jiggled as
he walked. His suit was climate controlled, insulating him from the
jungle’s heat and humidity, and its smell. The air from his tank
was scentless and filtered, and gave no sense of the world around
him. But his mind brought the jungle inside, the sense of danger,
the presence of the Riel.

His
eyes darted around, hunting for anything that seemed out of place.
His suit had a battery of sensors, everything from emission scopes
to wide-band motion detectors, but the dense jungle overpowered
them. Even his thermal imagers were useless—the Riel were
cold-blooded, so their body temperature matched that of the air
around them. Despite his complex array of sensors, the best tools he
had were his own eyes.