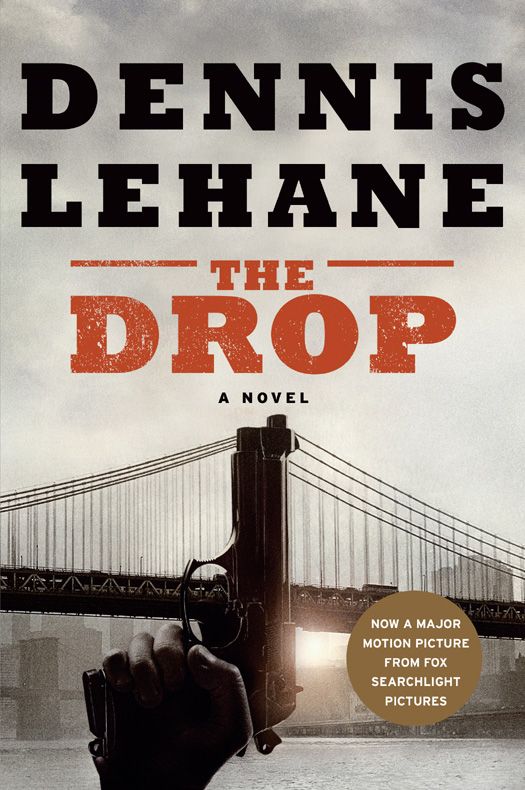 For Tom and Sarah

Now there was a love story.

Safe in the inner fold;

And maybe they hear, and wonder why,

And marvel, out in the cold.

Chapter 10: Whoever Is Holy

B
OB FOUND THE DOG
two days after Christmas, the neighborhood gone quiet in the cold, hungover and gas-bloated. He was coming off his regular four-to-two shift at Cousin Marv’s in the Flats, Bob having worked behind the bar for the better part of two decades now. That night, the bar had been quiet. Millie took up her usual corner stool, nursing a Tom Collins and occasionally whispering to herself or pretending to watch the TV, anything to keep from going back to the seniors home on Edison Green. Cousin Marv, himself, made an appearance and hung around. He claimed to be reconciling the receipts, but mostly he sat in a corner booth in the rear, reading his racing form and texting his sister, Dottie.

They probably would have closed up early if Richie Whelan’s friends hadn’t commandeered the opposite corner of the bar from Millie and spent the night toasting their long-missing, presumed-dead friend.

Ten years ago to the day, Richie Whelan had left Cousin Marv’s to score either some weed or some ’ludes (which was a matter of some debate among his friends) and had never been seen again. Left behind a girlfriend, a kid he never saw who lived with her mother in New Hampshire, and a car in the shop waiting on a new spoiler. That’s how everyone knew he was dead; Richie never would have left the car behind; he loved that fucking car.

Very few people called Richie Whelan by his given name. Everyone knew him as Glory Days on account he never shut up about the one year he played QB for East Buckingham High. He led them to a 7–6 record that year, which was hardly newsworthy until you looked at their stats before and since.

So here were long-lost-and-presumed-dead Glory Days’ buddies in Cousin Marv’s Bar that night—Sully, Donnie, Paul, Stevie, Sean, and Jimmy—watching the Celts get dragged up and down the court by the Heat. Bob brought their fifth round to them unasked and on the house as something happened in the game that caused them all to throw up their hands and groan or shout.

“You’re too fucking
old,
” Sean yelled at the screen.

Paul said, “They’re not that old.”

Bob dropped off their drinks in front of Jimmy, the school bus driver.

“You got an opinion on this?” Jimmy asked him.

Bob felt his face pinken, as it often did when people looked directly at him in a way that he felt forced to look directly back. “I don’t follow basketball.”

Sully, who worked a tollbooth on the Pike, said, “I don’t know anything you follow, Bob. You like to read? Watch
The Bachelorette
? Hunt the homeless?”

The boys all chuckled and Bob gave them an apologetic smile.

“Drinks’re on the house,” he said.

He walked away, tuning out the chatter that followed him.

Paul said, “I’ve seen chicks—reasonably hot ass—try to chat that guy up, they get nothing.”

“Guy ain’t into anything.”

Sean remembered his manners, raised his drink to Bob and then to Cousin Marv. “Thanks, boys.”

Marv, behind the bar now, newspaper spread before him, smiled and raised a glass in acknowledgment, then went back to his paper.

The rest of the guys grabbed their drinks and raised them.

Sean said, “Someone going to say something for the kid?”

The rest of the guys murmured their approval and drank, and Marv came over to Bob as Bob placed the old glasses in the sink. Marv folded up his paper and took in the guys at the other end of the bar.

“You buy them a round?” he asked Bob.

“Kid’s been dead, what, ten years now?” Marv shrugged his way into the leather car coat he always wore, one that had been in style back when the planes hit the towers in New York City, had been out of style by the time the towers fell. “Gotta be a point where you move on, stop scoring free drinks off the corpse.”

Bob rinsed a glass before putting it in the dishwasher, said nothing.

Cousin Marv donned his gloves and scarf, glanced down the other end of the bar at Millie. “Speaking of which, we can’t keep letting her ride a stool all night then not pay for her drinks.”

Bob put another glass on the upper rack. “She doesn’t drink much.”

Marv leaned in. “When’s the last time you charged her for one, though? And after midnight you let her smoke in here—don’t think I don’t know. It’s not a soup kitchen, it’s a bar. She pays her tab tonight or she can’t come in until she does.”

Bob looked at him, spoke low. “Her tab’s like a hundred bucks.”

“Hundred-forty actually.” Marv worked his way out from the bar, stopped at the door. He pointed at all the holiday decorations on the windows and above the bar. “Oh, and, Bob? Take the Christmas shit down. It’s the twenty-seventh.”

Bob said, “What about Little Christmas?”

Marv stared at him for a bit. “I don’t even know what to say to that,” he said and left.

After the Celtics game whimpered to an end like the mercy killing of a relative no one was particularly close to, Richie Whelan’s friends shoved off, leaving only old Millie and Bob.

Millie let loose a smoker’s cough of limitless phlegm and duration while Bob pushed the broom. Millie continued to cough. Just when it seemed she might choke to death, she stopped.

Bob pushed the broom up by her. “You all right?”

Millie waved him off. “Aces. I’ll have one more.”

Bob came around behind the bar. He couldn’t meet her eyes, so he looked at the black rubber floor covering. “I gotta charge you. I’m sorry. And, Mill’?”—Bob felt like shooting himself in the fucking head he was so embarrassed to be a member of the human race right now—“I gotta settle the tab.”

Bob didn’t look at her right away. “Yeah.”

Millie busied herself with the gym bag she carried out with her every night. “’Course, ’course. You got a business to run. ’Course.”

The gym bag was old, the logo on its side faded. She rummaged through it. She placed a dollar bill and sixty-two cents on the bar. Rummaged some more, came back with an antique picture frame with no picture in it. She lay it on the bar.

Bob said, “You don’t keep a picture in there?”

Millie looked off at the clock above the bar. “It faded.”

Millie nodded. “And the kids.”

She looked back into her bag, rummaged some more. Bob put an ashtray in front of her. She looked up at him. He wanted to pat her hand—a gesture of comfort, of you-are-not-entirely-alone—but gestures like that were better left to other people, people in the movies, maybe. Every time Bob tried something personal like that, it came off awkward.

So, he turned and made her another drink.

He brought the drink to her. He took the dollar off the bar and turned back toward the register.

Bob looked back over his shoulder at her. “This’ll cover it.”

Bob bought his clothes at Target—new T-shirts, jeans, and flannels about every two years; he drove a Chevy Impala he’d had since his father had handed him the keys in 1983, and the speedometer had yet to find the 100K mark because he never drove anywhere; his house was paid for, the property taxes a joke because, shit, who wanted to live here? So if there was one thing Bob had that few would have guessed he had it was disposable income. He put the dollar bill in the drawer. He reached into his pocket, pulled out a roll of bills, and held it in front of him as he peeled off seven twenties and added them to the drawer.

When he turned back, Millie had swept the change and the picture frame back into her gym bag.

Millie drank and Bob finished cleaning up, came back around the bar as she was rattling the ice cubes in her glass.

“You ever hear of Little Christmas?” he asked her.

“Nobody remembers it anymore.”

“Meant something in my time,” she said.

Her voice picked up a tone of distracted pity. “Not yours, though.”

“Not mine,” Bob agreed and felt a trapped bird flutter in his chest, helpless, looking for a way out.

Millie took a huge drag off her cigarette and exhaled with relish. She coughed a few more times and put out her smoke. She put on a raggedy winter coat and ambled to the door. Bob opened it to a light snowfall.

“Careful out there,” Bob said. “Watch the ice.”

THIS YEAR
,
THE TWENTY-EIGHTH
was trash day in his section of the Flats, and people had long since put their barrels to the curb for the morning pickup. Bob trekked the sidewalks toward home, noting with a mix of amusement and despair what people threw out. So many toys so quickly broken. So many discards of things that worked perfectly fine but had been designated for replacement. Toasters, TVs, microwaves, stereo equipment, clothing, remote-controlled cars and planes and monster trucks that only required a little glue here, a strip of tape there. And it wasn’t as if his neighbors were wealthy. Bob couldn’t count how many domestic squabbles over money had kept him up at night, had lost track of all the faces who'd climbed on the subway in the morning and sagged with worry, Help Wanted pages clutched in sweaty fists. He stood behind them in line at Cottage Market as they thumbed through their food stamps and in the bank as they cashed their SSI checks. Some worked two jobs, some could only afford housing through Section 8 allowances, and some studied the sorrow of their lives at Cousin Marv’s, eyes gone far away, fingers clutching their mug handles.

And yet they acquired. They built scaffolds of debt, and just when it seemed the pile would come tumbling down from the weight, they bought a living room set on layaway, tossed it up on top. And as they needed to acquire, they seemed to need to discard in equal or larger measure. There was an almost violent addiction in the piles of trash he saw, the sense it gave him of shitting out food you shouldn’t have eaten in the first place.

Bob—excluded from even this ritual by his mark of loneliness, his inability to draw anyone to him who seemed interested in him beyond five minutes of topic-of-the-day conversation—sometimes gave into the sin of pride on these walks, pride that he himself did not consume recklessly, felt no need to purchase what they demand he purchase on TV and radio and billboards and in magazines and newspapers. It would bring him no closer to what he wanted because all he wanted was to not be alone, but he knew there was no getting rescued from that.

At the Villa Rose by A. E. W. Mason
MAHABHARATA SERIES BOOK#2: The Seeds of War (Mba) by Ashok K. Banker
Thirteen Roses Book One: Before: An Apocalyptic Zombie Saga by Cairns, Michael
Feel My Love by Johnson, Ash
Hopes by Linda Chapman
The Summer Palace by Lawrence Watt-Evans
There But For The Grace by A. J. Downey, Jeffrey Cook
Skye Object 3270a by Linda Nagata
Sun Wolf 1 - The Ladies Of Mandrigyn by Hambly, Barbara
Bouncers and Bodyguards by Robin Barratt
Our partner