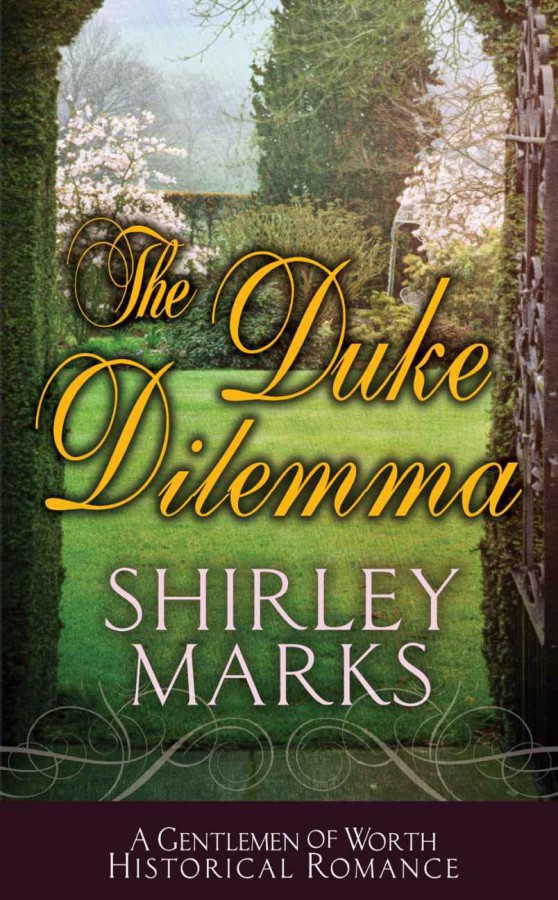 With his three daughters finally married, Edward, Duke of Faraday, prepares to settle into a quiet bachelor life. His family, however, has other plans. Concerned that the handsome widower will grow lonely without their company, the young ladies and their brother scheme to find Edward a new duchess-
whether he likes it or not.

Suddenly the duke is London’s most eligible gentleman, caught up in a swirl of parties and balls designed to place Society’s loveliest widows in his path. His only solace is a quiet garden hidden amidst the hustle and bustle of the city, where an intriguing stranger captures his imagination as no woman has before. But is she a kindred spirit?
Or is he fated for solitude after all?

Shirley Marks’s delightful Gentlemen of Worth series continues in this lighthearted Regency romance about two independent hearts embracing a second chance at love.

To Mrs. V and the current group: Evelyn, Jenny, Kathy, and Rachel

To my mother and her gardening magic.

In April 1815, the massive eruption of Mount Tambora on the island of Sumbawa, Indonesia, was the fifth volcano within four years that ejected immense amounts of volcanic dust into the upper atmosphere. These eruptions created an enormous sun filter, darkening the skies and decreasing the global temperature. Agricultural crops failed and livestock died in much of the Northern Hemisphere, resulting in the worst famine of the nineteenth century.

This story takes place in 1816, which is known as “the year without a summer.”

“I beg your pardon. Did I hear you correctly, Frederick?”

Edward, Duke of Faraday, returned his inked quill to its stand lest it slip from his fingertips onto his document. Edward hardly regarded himself elderly at two and forty and never would have considered his hearing poor, but in this moment, he hoped perhaps it was. If he had just heard correctly, he might be felled by a gentle passing breeze right there in his very library.

Frederick, Earl of Brent, the heir and only son of His Grace, struck an attitude, displaying his profile before the hearth. It must have been for the benefit of his parent that he repeated, “I said, sir, that I thought it time to consider marriage.”

“
Yours?
” the Duke finally replied. “You are not yet twenty.” Not many gentlemen of his age contemplated matrimony.

“At nineteen you were duke and wed to my mother,” Frederick was quick to point out.

“Coming into the title earlier than anyone expected necessitated that I marry. Meeting your mother was a fortuitous happenstance.” Edward recalled it was the happiest time of his life with the exception of the births of his children.

“In any case…” Frederick remained composed and, it appeared, quite unmoved. “I remain determined.”

“What happened to the carefree, fun-loving Freddie?” How could his son make a change of this magnitude in so little time?

“He’s still about, I imagine.” A smile spread over Frederick’s lips. “It’s just that I realize I have duties and responsibilities. I cannot forever be a fun-loving buck. Mind, I don’t wish to rush my fences.”

Edward well knew the vices into which some young men fell. Gaming, wine, and ladies all played a part in an adolescent male’s life. It was a decision a son needed to make on how to navigate the temptations, not for a father to dictate.

If this news of Frederick’s willingness to wade into matrimonial waters were true, Edward could not have been happier. It meant his son had settled down and matured. Yet he would not be so easily convinced merely by his son’s pronouncement.

Only last year his youngest daughter, Muriel, had come to Town for the Season, and although she did make a match, marriage had not been her primary reason, he later learned. Edward had known Frederick to be a close conspirator of Muriel’s in their youth, yet she had kept even him in the dark about meeting her Latin tutor in secret. His elder daughter, Augusta, who was the first to marry and now lived in Suffolk, had not been far removed in character. Then there was their middle sister, Charlotte. Come to think of it, his angelic Charlotte, also married and residing in Cornwall, was the only offspring who did not possess a deceptive bone in her body.

How had Edward managed to raise such unusually…
clever
children?

“I cannot disagree with your choice of direction. I had always believed it would be best you take the matrimonial step by your choice rather than through external demands. You haven’t a mother to please, but you do have two very interested aunts who’ll take notice if you pass your thirtieth year and don’t do the pretty.” The sisters of the late duchess, especially Mrs. Penelope Parker, took it upon themselves to remain involved with the
Duke’s children in the absence of their mother. “What of your plans for the Grand Tour?”

“Alas, Muriel has gone to the Continent, and I believe she has decided to remain for an extended period in Italy—it’s her interest in Roman everything, you know.” Frederick glanced away and commented, “I doubt the country is vast enough for us both. I’d bump into her while in Florence or Venice all the while thinking she was touring the Seven Hills.”

“On a day trip, I expect, following the footsteps of Augustus Caesar’s legions.” The Duke knew well enough of her obsession.

“Don’t you know it!” With the wave of his hand, Frederick pushed the entire notion aside. “My new bride and I may decide to travel the Continent. Perhaps we’ll visit Paris instead of Rome on our wedding trip.”

“And do you have any idea as to the identity of your bride?” Had the lad taken to some lass he’d seen while out and about?

“Not at all.” Frederick’s expression appeared sincere. “I merely wish to begin my search and have no expectations of an outcome for this year. It may take several, for all I know.”

“Is there anything you need of me, or is stating your intentions all you wished?”

The stoic stance Frederick had struck before the hearth was apparently only a facade. He removed his hand from the mantel and his booted foot from the fender, appearing every bit the young man just out of Eton, not at all the next in line for a dukedom. “I thought you might accompany me to a few balls, the opera, or ballet.”

Edward thought his an odd request. Frederick had never expressed interest in attending the opera or ballet. “What about some of your friends? Surely there must be one among them?”

“Tommy Norton and Anthony Shelbridge are more interested in the races and gaming. Then there’s Trevor. Well, he’s not
near ready to be caught in the parson’s mousetrap.” Frederick seemed to have given this quite a bit of thought. “None of them would be willing to accompany me on this endeavor, but that’s bound to change one of these days.”

Double Jeopardy by Martin M. Goldsmith
The Storm by Dayna Lorentz
Wedge's Gamble by Stackpole, Michael A.
The Nothingness of Ben by Brad Boney
Article 23 by William R. Forstchen
The Prosperous Thief by Andrea Goldsmith
Goliath, Volume One by M.H. Silver
In the Company of Others by Julie E. Czerneda
Janet McNulty - Mellow Summers 01 - Sugar And Spice and Not So Nice by Janet McNulty
Tempted by a Rogue Prince by Felicity Heaton
Our partner