Read The Dying of the Light Online

The Dying of the Light 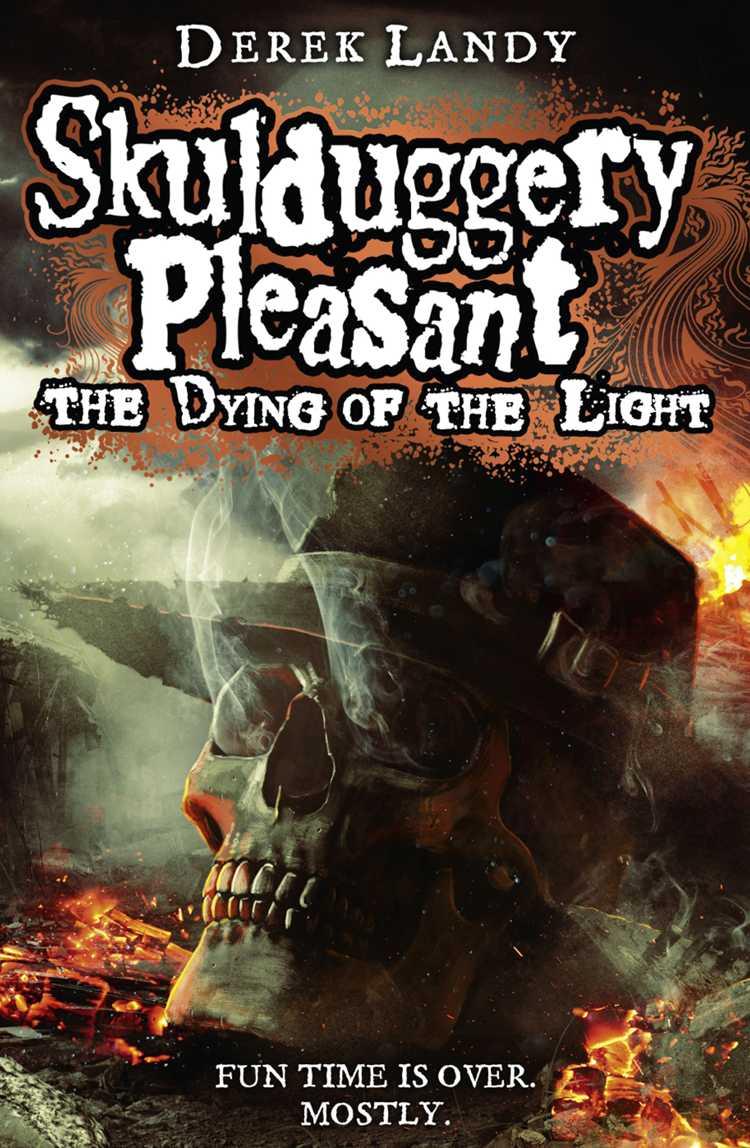 Derek Landy blogs under duress at

Do Not Go Gentle into That Good Night
by Dylan Thomas, from
The Poems of Dylan Thomas
(Dent), used with permission from David Higham Associates

This book is dedicated to me.

Derek, without you, I would not be where I am today.

Words cannot convey how much I owe you for the guidance you’ve shown me – for your wisdom, your wit, your keen insight and your keener intelligence, your taste, your strength, your integrity and your humility. I won’t mention the charity work you do, or the political activism you’re involved in, or the ecological work you’ve spearheaded. And it’s not just because you won’t talk about it – it’s because no one else does, either.

You have taught me how to be a better person.

Nay – you have taught us all.

Do not go gentle into that good night,

Old age should burn and rave at close of day;

Rage, rage against the dying of the light.

2. Living in the Shadow

3. Throwing Down the Gauntlet

5. To Watch the World Burn

16. The National Black Belt Review Board

17. A Voice from the Darkness

22. The Return of Valkyrie Cain

24. A Fine Pair of Specimens

29. Those who Live in Darkness

45. A Brutal Act of Kindness

51. The Temple of the Spider

52. The Devil Comes to Play

70. Return of the Living Dead

ive in the morning and Danny is up, rolling slowly out of bed, eyes half open as his bare feet touch the floorboards. Getting up this early is worse in the winter, when the cold threatens to push him back under the covers. Colorado winters are something to behold, as his dear departed dad would say, and Danny isn’t one to argue with his dear departed dad. But the summers are warm, and so he sits on the edge of his bed without shivering, and after a dull minute he forces his eyes open wide, stands up and dresses.

He goes downstairs, puts the coffee on while he opens the store. Five thirty every morning except Sundays, the General Store is open and ready for business. It was that way when Danny was a boy and his folks ran the place, and it’s that way now that Danny is twenty-seven and his folks are cold and quiet and lying side by side in the ground. On his more maudlin days, Danny also likes to think his dreams are buried down there with them too, but he knows this is unfair. He tried to be a musician; he moved to LA and formed a band and when it didn’t all happen the way he wanted he scampered back home to take over the family business.

He quit, and there’s no one to blame but himself.

By six, the town of Meek Ridge is awake. People stop by on the way to work, and he speaks to them with none of that easy patter his mom had been famous for. Back when she was alive, she’d talk the hind legs off a donkey, and she’d always be quick to crinkle up her eyes and laugh. His dad was more measured, more reserved, but people around here still liked him well enough. Danny doesn’t know what they think of him, the wannabe rock star who lit out as soon as he finished school and skulked back with his tail between his legs years later. Probably just as well.

Early morning grows into mid-morning, and mid-morning sprouts wings and becomes a hot, sun-blasted afternoon. Unless there’s a customer perusing the shelves, Danny stands at the door, cold bottle of Coke in his hand, watching the cars pass on Main Street and the people walk by, everyone seeming like they have things to do and places to go. By around three, business has picked up, same as it always does, and that keeps him busy and away from the sunshine, until finally he raises his head and it’s coming up to seven in the evening and his favourite time of the week.

He takes out the list even though he doesn’t need it, just to make sure he hasn’t missed anything. When he’s done, he’s filled two large grocery bags – the reusable canvas kind, not paper or plastic. He locks up, puts the bags on to the passenger seat of his dented old Ford and drives out of Meek Ridge with the window down, his busted AC not doing a whole lot to dispel the trapped heat. By the time the road gets narrower, he’s already sweating a little, and as he follows the twisting dust trail, he can feel the first trickle of perspiration running between his shoulder blades.

Finally, he comes to the locked gate and waits there, the engine idling. He doesn’t get out and hit the intercom button. Same time every week, he’s here and she knows it. Hidden somewhere in the trees or the bushes, a camera is focused on his face. He’s stopped trying to spot it. He just knows it’s there. The gate clicks, opens slowly, and he drives through.

The previous owner of this farm died when Danny was a teenager, and the buildings fell into disrepair and the fields, hundreds of acres of them, got overgrown with weeds and such. Now the fields are meadows, lush and vast and green, and the buildings have either been salvaged or rebuilt from scratch. A fence encircles the property, too tall to climb over, too sturdy to break. There are hidden cameras everywhere, and every last thing is rigged with alarms. Stories of the farm’s new owner swept through Meek Ridge like a tidal wave when she first moved in, and ever since the waters have been unsettled.

There are those say she’s an actress who’s had a breakdown, or an heiress who rejected her family’s lavish lifestyle. Others reckon she’s in Witness Protection, or the widowed wife of a European gangster. The tidal wave has left behind it pools and streams of gossip in which rumours and stories and outright lies ebb and flow, and Danny doubts any of them even remotely touch upon the truth. Not that he knows what the truth is. The farm’s new owner is almost as much a mystery to him as to anyone else in town. Only difference between them is that he gets to meet her once a week.

He pulls up to the farmhouse. She’s sitting in a rocking chair, an actual rocking chair, in the shade on the porch, something she likes to do most warm evenings with her dog curled up beside her. He takes the grocery bags, one in each arm, and walks up the steps as she puts down the book she’s reading and stands. She looks to be nineteen or thereabouts, with dark hair and dark eyes, but she’s been living here for over five years and she hasn’t changed a bit, so he reckons she’s somewhere around twenty-four or so.

Pretty. Real pretty. She has a single dimple when she smiles, which isn’t quite so much a rare sight any more. Her legs are long and strong, tanned in cut-off jeans, scuffed hiking boots on her feet. This evening she wears a sleeveless T-shirt, the name of some band he’s never heard of emblazoned across it. She has a tattoo on her left arm, from the shoulder to the elbow. Some kind of tribal thing, maybe. Weird symbols that almost look like hieroglyphics.

NiceGirlsDo by Marilyn Lee
Careless People by Sarah Churchwell
The Shadows, Kith and Kin by Joe R. Lansdale
To Marry A Scottish Laird by Lynsay Sands
Harlot at the Homestead by Molly Ann Wishlade
Her Last Letter by Nancy C. Johnson
Her Dark Lord by Mel Teshco
Nebraska by Ron Hansen
The Kind Folk by Ramsey Campbell
The Movement of Stars by Amy Brill
Our partner