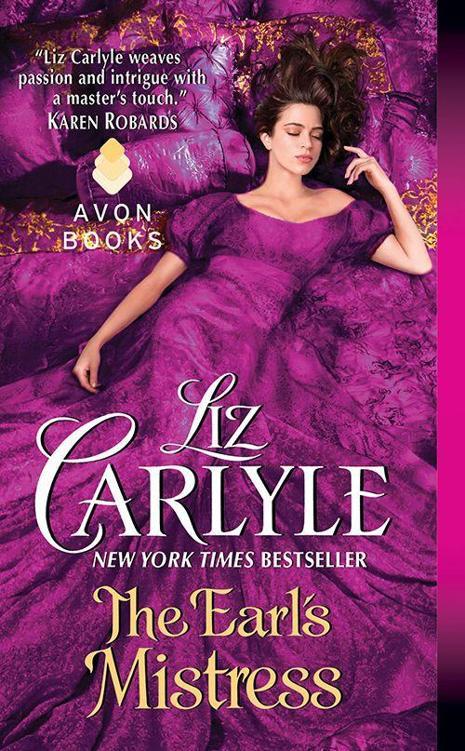 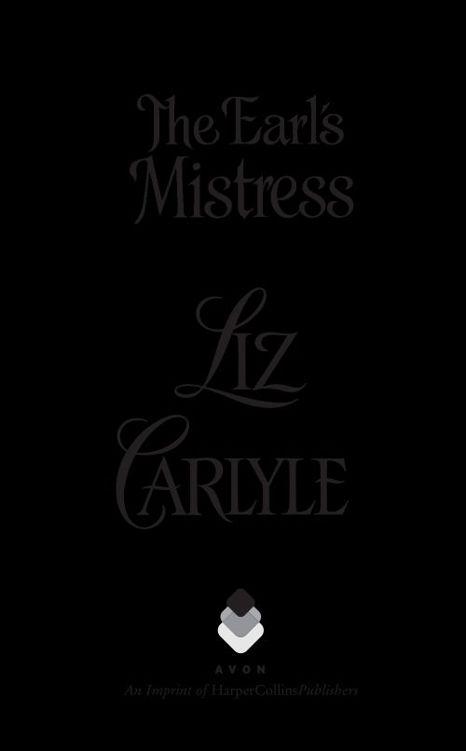 M
isery for one man can feel like slow absolution to anot her, and the misery that came to Northumbria in February could have absolved a man of capital murder. The Earl of Hepplewood had never committed capital murder—well, not
quite
. But the incessant, bone-chilling cold and the spatter of ice that periodically hailed across his windowpanes felt deservedly isolating just the same.

Yet if isolation it was, it was a splendid one. Bejeweled by its elegant, perfectly proportioned Palladian mansion set amongst eighty acres of rolling parkland, the estate of Loughford was a showcase of ornamental follies, fountains, and footpaths, the whole of it possessing a beauty even the wickedest weather could not dim.

Moreover, all that elegance had been burnished by a grand infusion of new money—specifically, his late father-in-law’s mill money—until the house was now the finest gentleman’s seat within two hundred miles.

Hepplewood reclined with feigned leisure in what was commonly referred to as his grandfather’s study, for though the sixth earl was thirty years dead, the house might as well have been still his. Hepplewood’s father had cared nothing for Loughford; he had lived and breathed politics and had let the place run to ruin.

Hepplewood, on the other hand, lived and breathed sin.

There was no better venue for either pursuit than London.

He could not possibly return there soon enough, the earl decided, tossing aside the letter he’d just read. He lifted a pair of ice-blue eyes to meet his secretary’s gaze.

“So our new governess brings us a reference from the Marchioness of Petershaw?” he remarked, his mouth twisting. “How’s that for irony, Jervis? A letter of character from
La Séductrice,
the most notorious lady in London.”

Jervis cleared his throat delicately. “One cannot always choose one’s employers based upon their moral character, my lord.”

“No, I gather not.” The earl’s mouth twisted further. “Otherwise, you would not likely be working for me.”

Jervis’s pale face infused with color. As if to obscure the accuracy of his employer’s point, he gestured at the desk’s pile of paperwork. “The young woman has also brought a glowing recommendation from some country vicar in Sussex.”

“And quite a moralizing bore he sounds, too,” said the earl, rising languidly to circle round the massive desk. “Well. Let us hope our Miss Aldridge is not as bland, demure, and well-churched as the last one, for we’re fresh out of curates for them to marry. Send her in.”

Jervis bowed himself from the room.

Isabella Aldridge was anything but bland.

She was instead a dark, fragile beauty; perhaps the most beautiful creature he’d ever beheld, with a face pale as porcelain and thick, inky tresses that the most severe of arrangements could not disguise. She was tall, too, he realized, as she swept her gray skirts through the door, yet far too thin for his liking.

He exhaled slowly, and with no small measure of relief.

She stopped some distance from the desk and dropped into a curtsy that was at once graceful and subservient, her hems puddling like quicksilver upon his bloodred carpet.

“Your lordship,” she murmured, flicking a glance up at him as she rose.

“Good morning.” Hepplewood’s words were cool and clipped as he tossed aside her paperwork. “Miss Aldridge, I believe?”

She gave a nod that held something less than agreement. “Actually, it is
Mrs.,
my lord,” she said, in a quiet, throaty voice. “Mrs. Aldridge. I am a widow.”

“Without children, I trust?” he said a little harshly.

Her gaze faltered and dropped again to the carpet. “I was never so blessed,” she replied. “It was the briefest of marriages. In my youth.”

Mrs. Aldridge did not look, however, as if her youth was much past her.

Hepplewood stared her boldly up and down, willing himself to be unaffected as he motioned her to take the chair before him. Despite her dull attire and quiet demeanor, Mrs. Aldridge could not be much past five-and-twenty by his assessment—and Hepplewood was known to be a keen judge of female flesh.

He suppressed a bitter smile. Hers had doubtless been a short and tragic union, then. What a coincidence.

But Mrs. Aldridge’s marriage had likely been made of more honorable stuff than his had been. She had wed a soldier, perhaps? Or an older gentleman?

But the latter sort of alliance was made only for money—and if Mrs. Aldridge had possessed two shillings to rub together, she would not be here.

She must surely know who and what he was.

Lady Petershaw, to be certain, could have told her plainly enough. They ran in the same social circle, he and the marchioness; a circle that was, if not the very rim of Polite Society, then certainly its thinning edge.

And society, the poor, collective idiots, scarcely knew the half of what Hepplewood was up to, no matter the scandalous gossip they might titter over. He had learnt early on to hide his darker habits—usually in a small country house or a Parisian brothel.

No, surely Mrs. Aldridge hadn’t been fool enough to reply to his agent, then make no further enquiries into his character?

But having settled into his chair, the woman was still looking up at him through her wide-set and striking eyes. They were haunting, those eyes; a sort of violet blue rimmed with thick, black lashes that held no hint of judgment or even of fear.

No, it was resignation. She looked as if she’d come into his house believing it the portal to Hades and prepared to endure it.

Well. She would make for easy pickings, then.

Hepplewood realized at once the train of his thoughts and derailed it.

He’d no interest in harboring any temptations here at Loughford. He still possessed enough discernment, he hoped, to indulge his baser inclinations well away from his family home.

Well away from Lissie.

The woman surprised him by speaking. “M-may I ask, my lord—what is the child’s name and age? Your employment agent, Mr. Gossing, was not very specific.”

“Felicity,” she repeated, mouthing the word as if it were new to her. “What a lovely name.”

“I did not choose it,” he said abruptly. “She is called Lissie. Felicity is her mother—or, that is to say, it was her mother’s name. My in-laws wished it used.”

Now why the devil had he said that?

Mrs. Aldridge could not possibly care. Moreover, it was none of her business.

To dispel the awkwardness, he snatched up her paperwork again and let his gaze run blindly over it. There was no point, for he didn’t give a damn what it said. He’d no intention of hiring Mrs. Aldridge.

He still sat with one hip propped upon his desk. It was a position of neither authority nor gentlemanly formality; he wished merely to study her. Perhaps, even, to agitate her ever so slightly. He felt the devil stirring inside him again. What would it take to bring a flush of color to those lovely, if perhaps faintly hollow, cheeks?

Her face was otherwise perfection, with a delicate nose, high but gentle cheekbones, and those wide, curiously colored eyes that he’d somehow expected would be brown. And that hair—yes,
that,
he imagined, was her glory. It would tumble down like a dark, lustrous waterfall when pulled free of that punishing array of braids, and slide through a man’s fingers like—

She cleared her throat sharply. “Was there . . . anything you wished to ask me, sir? About my qualifications, I mean?”

“Yes,” he lied. “You were last employed, I see, by Lady Petershaw. Did she hire you? Yes, I suppose Lord Petershaw was long dead.”

That, perhaps, explained the infamous lady’s willingness to employ such a beauty. But what of Lady Petershaw’s pack of panting admirers? Had she locked Mrs. Aldridge in a turret in order to keep her from sight? Or had she made some use of the girl?

Given Lady Petershaw’s proclivities, another beautiful woman to hand mightn’t have gone amiss.

He cleared his throat. “Petershaw left only sons, as I recall.”

“I’m quite capable of tutoring a young lady, I do assure you.” She stiffened perceptibly. “Indeed, I should prefer it.”

And Hepplewood thought
he
would prefer to tutor Mrs. Aldridge. He had a subject in mind, too, though it did him no credit. Very little ever did. Still, he could almost envision her strapped up in black leather, inky hair spilling over her bare breasts, her beautiful wrists caught fast against his headboard.

But she was too thin. Too fragile. And her eyes, he thought, were far too wise.

He tossed the paper down. “So the lads have gone on to the greater glory of Eton.”

“And did you enjoy your work in Lady Petershaw’s entourage, Mrs. Aldridge?” he asked, dropping his voice an octave. “Did you find it in every way . . .
satisfying
?”

Her color heightened ever so slightly. “I enjoyed the children, sir,” she said a little tartly. “Yes, I enjoyed being with them.”

“I see,” he said more blandly. “And it was your first and only post, I gather?”

“Yes, but I was with Lady Petershaw six years.” There was a hint of irritation in her voice now. “Is there some question, my lord, as to my qualifications? Mr. Gossing implied that this post was to be mine were I but willing to—”

“Willing to what?” he interjected a little suggestively.

“Willing, sir, to travel so far north,” she snapped, “in the dead of a wicked winter.”

And there it was.
As if he’d set spark to tinder, her eyes were blazing now—burning with a dark, amethyst fire. He had sensed it, that depth of suppressed emotion inside her, and found himself oddly pleased.

Alas, it was time to put an end to this charade. A man had to know how to pick his battles, and he had the distinctly uncomfortable feeling that the beautiful Mrs. Aldridge was a battle best not fought. A battle that might leave a man scarred, and by something a bit more painful than just her nails raking down his backside.

Hepplewood sighed and picked up her papers, drawing them between two fingers and creasing them to a knife’s edge.

She stiffened, her gaze flying to his.

He seized the brass bell on his desk and gave it an abrupt clang.

Mrs. Aldridge’s eyes had narrowed. “I beg your pardon?” she replied, coming out of her chair. “What do you mean,
I will not do
?”

“I mean you are not what I need in a governess,” he replied, tossing the papers aside, “though it was a pleasure meeting you. Ah, Jervis. There you are. Kindly show Mrs. Aldridge back to the village and arrange train fare back to Town. First class, of course, to thank her for her trouble.”