Read The Edge of Sanity Online

The Edge of Sanity 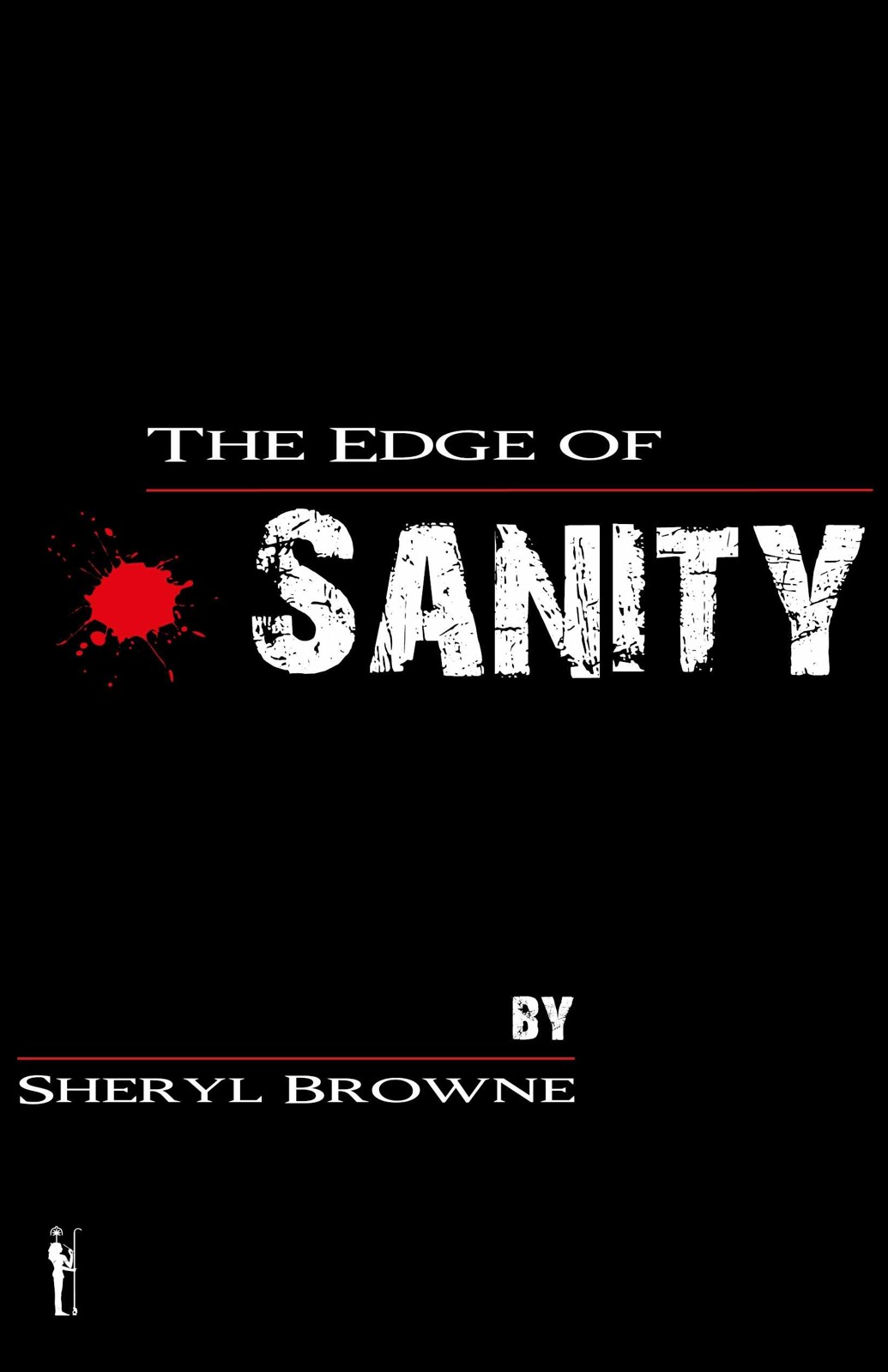 The Edge of Sanity

Sheryl Browne asserts the moral right to be identified as the author of this work under the Copyright, Designs and Patents Act 1988.

All characters and events in this publication,o ther than those clearly in the public domain, are fictitious and any resemblance to real persons, living or dead, is purely coincidental.

All rights reserved. No part of this publication may be reproduced, stored in or introduced into a retrieval system, or transmitted, in any form or by any means, including but not limited to electronic, mechanical, photocopying or recording, without the prior written permission of the publisher.

Typeset in Crimson and Zombie Control with Adobe InDesign

Find out more about Sheryl on www.sherylbrowne.com and meet her on Facebook at https://www.facebook.com/SherylBrowne.Author

The colophon of Safkhet is a representation of the ancient Egyptian goddess of wisdom and knowledge, who is credited with inventing writing.

Safkhet Publishing is named after her because the founders met in Egypt.

to Drew
who I hold personally responsiblefor my writing this book.
“Write something I can read,” he said, and then did, which must be praise in itself.

The Edge of Sanity is something a little bit different to my previous books. When I started writing it, I was firmly into my thriller reading phase, devouring truly fabulous authors such as, Martina Cole, Minette Walters, Patricia Cornwell, Patricia Highsmith … the list goes on.

Why don’t you write a thriller, my son suggested. You are a writer. Indeed I am. However, whilst I am a firm believer in ‘doing’ rather than aspiring to do, I’m not so full of myself I imagined I could write as well as the above mentioned awe-inspiring experts in the genre. Still, my interest was sparked. The bug had bitten and the ideas started to flow. The core of my writing has always been the family unit and the impact of certain life events on that unit. I decided therefore that mine would be a psychological thriller, looking at a relationship already damaged by tragedy and whether it could survive a nightmare at the hands of a captor and emerge intact.

I wasn’t sure I’d pulled it off. Tentatively, I ran it by my editor, formerly of Headline. Her comments: I read Edge of Sanity yesterday ... well, it was a surprise! Gut reaction: extremely good. I LOVE Daniel. He is an old fashioned kind of hero—an Alistair MacLean type of decent, ordinary man who is forced by extraordinary circumstances into being a hero; a competent man but who has suffered—ooh, we do like a man who has suffered! You have woven in the seeds of Daniel’s problems well—elegant, intriguing touches. So, is it publishable? Yes.

My publisher loves it enough to publish it! Thank you, Safkhet Publishing. I leave you, the all-important reader to judge. I really hope you won’t be disappointed.

Daniel saw the light go on in the kitchen window. Reflected on the dappled water, the light shimmered and danced like a thousand amber scribbles. Sighing nostalgically, he wiped the oil and sweat from his forehead, eased himself painfully from the well of the boat, and set out across the boatyard towards the house.

The night was still, apart from the soft rustle of leaves on the wind and the melodic clink of metal against metal as narrow-boats nudged together, bobbing lazily on the water behind him. Daniel used to like this time of day; everything in the boatyard seeming to be sleeping, resting in anticipation of a hectic morning, when the silence would give way to the rhythmic chug of engines and the thick smell of diesel and oil in the air. Not anymore, though. Tomorrow, and every day thereafter until it was sold, the yard would be as still as the night.

Deep in thought, he didn’t notice the black cat slinking towards him, until it mewed plaintively, weaving a figure-of-eight around his legs as he walked. He bent to stroke the aloof animal before it padded softly off into the night, then watched its sleek figure progress back along the towpath; his chest constricted as the cat sprang into the air, covering the space between bank and boat in one, swift, feral movement, the little bell on its collar tinkling as it went. Daniel swallowed and tried hard to still a flashback, counting silently backwards in a vain attempt to block it out. Was it only last summer? It seemed like a lifetime ago, only yesterday that Emma was riding around the yard on her shiny new Disney Princess bike, tinkling her bell, bidding everyone to steer clear. It had been hot that day. No rain for weeks, the water levels had been low, the ground parched, and the work gruelling under the midday sun. Daniel had been painting the hull of one of the boats, the thick black gunk only adding to the sticky sweat he was fast getting in. He had straightened up when he had caught sight of Joanne coming across the boatyard, her overalls paint-spattered, paint in her hair, slicked across her cheeks, the hosepipe in her hand and a devilish gleam in her pretty green eyes. ‘Joanne, you do not want to do this,’ he had laughed as his wife had walked threateningly towards him.

‘Oh, but I do,’ she had assured him, waggling her eyebrows mischievously as she had aimed the hose right at him.

Daniel had backed off, almost putting his foot in the paint tray. ‘Joanne, one more step, I swear, and I’ll—’

‘There are more painful ways to go, Jo,’ he had growled, stepping towards her, as she pointed and shot, soaking him to the skin with shocking cold water, and then soaking them both as he had tickled her without mercy. They had both tumbled to the ground eventually, a tangled wet heap, where she had straddled him before he could blink.

‘Okay. Okay, I give in,’ he had said, preferring to breathe rather than blow icy water.

‘Submit?’ she had cried victoriously, pinning his arms above him.

He had just said so and was about to confirm it, when the words died on his lips. ‘Emma!’ he had shouted urgently instead. ‘Stay away from the water! Emma! Christ!’

Joanne had scrambled fast to her feet, but Daniel had been faster, bolting towards the river, catching hold of the back of the saddle, circling Emma around the waist to pluck her to safety as the front wheel teetered dangerously over the edge of the bank. ‘Emma, for
Pete’s
…!’ He had plonked her firmly on the ground, yanking the bike back with his free hand. ‘What were you
doing
? You don’t go near the edge, Emma. You know that!’

‘Dad-
dy
, I can swim, you know,’ she had sighed, regarding him despairingly from under lush, dark eyelashes, incongruous with her baby-blonde hair.

Daniel’s mouth had twitched into a smile then. He couldn’t help himself, looking at this miniature replica of Jo, acting her mother’s age. ‘I know you can, sweetpops,’ he had said, crouching down to relate to his five-year old daughter on her level. ‘But Cat can’t, can he?’

‘You’re wet,’ she had stated matter-of-factly, and then turned to fish Cat out of the bicycle basket and head purposefully back to the house to reappear five minutes later with Cat kitted out in one sadly deflated water-wing.

Alone now in the deserted yard and feeling sick to his soul, Daniel closed his eyes briefly and then looked to the stars.
‘Where are you now, baby?’
he asked throatily.

The clink of glass on glass confirmed his fears. Daniel paused outside before pushing through the back door. He wanted to go in, talk to Jo, reach out, but simply didn’t know how. The rift between them now seemed as wide as an ocean. Daniel wanted to cross it. God knew he was desperate just to
hold
her, if nothing else. But how, when Jo couldn’t even bear to be near him?

Cold, she had called him. An emotional wasteland because he had held himself together, somehow, since the car accident. The way Daniel saw it, he had to. Big boys don’t cry. His father had instilled that in that in him, even in childhood, when his mother had died. No, before that—way before, in the cold, sadistic way he did.

Even then, Daniel hadn’t given in to emotion. With silence came safety. And so, Daniel had learned not to utter a word. He counted instead, silently backwards. It was his coping mechanism. It helped him to focus and get through whatever life threw at him. It was no help now, though. There was no way to cope. The problem wasn’t going to go away. The pain would never stop. But no matter how much he wanted to give up, to just stop being, he couldn’t. Daniel held firm to the belief that he had to be strong, for Joanne’s sake and for Kayla who, at fifteen years old, was in danger of going off the rails. It’s what kept him going. He didn’t know how else to do it.

It was a mistaken belief, according to Jo.

‘So, the wanderer returns,’ she said, with a definite slur to her voice. Daniel closed the door behind him and braced himself.

‘You
bastard.
’ She glared at him, as he turned. ‘Did you remember what day it was?’

Daniel ran his hand over his neck. Of course he knew what day it was. How could he ever forget?

Jo’s words aimed to cut deep, and Daniel would have begged her then, if he could have found his voice, to stop. To please, please stop, because it hurt too damn much.

‘It’s your fault!’ Jo grabbed his arm. ‘All of this is
your
fault.’

Daniel reeled on his feet as the words hit home. Jo was right. Everything that was wrong in their lives was down to him. Joanne’s drinking, Kayla disappearing at night,
to study with her friends
, she said. More like to trawl the town centre in Worcester. Daniel knew better—she was talent-spotting, nightclubbing, and hanging out with people she shouldn’t be.

And Emma … Jo hadn’t needed to say anything there. He had known it was his fault. All of it. And how Jo felt about it was patently obvious.

It should have been him.

Christ
, how he wished it had been. The numb emptiness of loss permeated his very bones. It seemed as if the sun had never shone where his little girl played. Nothing he could do could make it right. Daniel knew it. He dropped his gaze and raked a hand through his hair. He wanted to scream.

King's Gambit by Ashley Meira
The Aqua Net Diaries by Jennifer Niven
The Guard by Pittacus Lore
The Last King of Lydia by Tim Leach
Celeb Crush by Nicole Christie
Chasing Silver by Jamie Craig
Outside In by Cooper, Doug
The Unplowed Sky by Jeanne Williams
The End of Vandalism by Tom Drury
The Aloha Quilt by Jennifer Chiaverini
Our partner