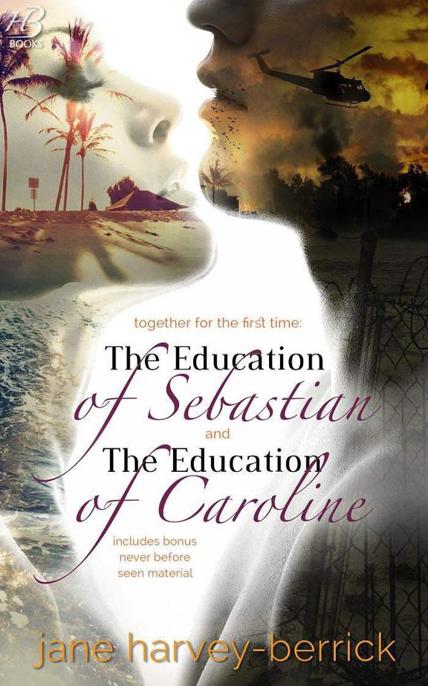 The Education
of Sebastian

The Education of Caroline

J
ane A. C. Harvey-Berrick has asserted her right under the Copyright, Designs and Patents Act 1988 to be identified as the author of this work.

This book is a work of fiction. Names and characters are the product of the author’s imagination and any resemblance to actual persons, living or dead, is entirely coincidental.

All rights reserved; no part of this publication may be reproduced or transmitted by any means, electronic, mechanical, photocopying or otherwise, without the prior permission of the publisher.

Cover photographs by Shutterstock, with permission

Thanks for permission to EMI Music Publishing to reproduce lyrics
from ‘Martha’s Harbour’, All About Eve in ‘The Education of Caroline’

‘One Dog at a Time: Saving the Strays of Helmand’ by Pen Farthing

To Lisa Ashmore, for telling me to write this series

To Kirsten Olsen, for all her encouragement, and for falling in love with Sebastian

To Sheena Lumsden, for her humour and energy and loyalty

To John Papajik, for all things military

To Ana Alfaro, for all things food

To Camilla, for the Italian translation

To Dina Eidinger, for suggesting the idea for this edition

To Audrey Orielle, for loving Sebastian so much

To Hang Le for wrapping her vision around my words so beautifully.

For their support and encouragement, I’d like to thank…

Emily and the Girls, The Sub Club Books

PART ONE – THE EDUCATION OF SEBASTIAN

PART TWO – THE EDUCATION OF CAROLINE

THE EDUCATION OF SEBASTIAN

I’ve often wondered why brides-to-be speak with such excitement of their wedding day –
the best day of their lives
. Doesn’t that imply that it’s all downhill from then on?

Despite what happened later, I can’t bring myself to regret the events of that summer.

I think it was the uniform. My husband dazzled me in his US Navy whites and with his flashy sports car that was so low to the ground, it seemed to skim along the road like a pebble on a lake.

David was a medical officer in the US Navy, newly promoted to Lieutenant Commander and assigned as a flight surgeon. He was 11 years older than me. He seemed urbane and sophisticated and to a girl from nowhere who had seen nothing, he was every wish fulfilled.

My mother smelled a good catch and my dear, sweet father was talked over and down by the two women in his life who vied for his attention.

Competition with my mother was relatively new. She had always been rather ashamed of her plain, gawky daughter, who seemed to have no breeding and no wish for it; but at the age of 17, I blossomed, quite literally, growing breasts almost overnight, and attracting the attention of young men who had formerly cast their glassy-eyed looks at my elegant and glossy mother. Suddenly, I was interesting, the sexy one, and she loathed it. Of course, she couldn’t and wouldn’t admit to that, so we fought. My father hated it and would descend to the basement to listen to Puccini or Rossini, and wonder why his ‘two best girls’ were at each other’s throats.

So when David came along to sweep me off my feet, my mother couldn’t help a quick shove to speed the process and send me on my way.

She’d never thought of college as an option for me—consequently there was no college fund. She’d always told my father I wouldn’t last a single semester: ‘too weak’, apparently. Besides, marriage was supposed to save me from all that tedious studying.

“He’s too good for you, of course, Caroline,” she said, “but we’ll do the best we can.”
Well, I shall do my best to make you attractive, although ‘pretty’ is too much to hope for you.
“Oh, you look so much like your father.”

My father was short and dark and very Italian. I inherited his bright hazel eyes, thick, uncooperative hair that rippled in waves down my back, his olive skin and quick, passionate temper. I also inherited certain hirsute qualities that meant I was waxing my legs from the age of 10 and my armpits from the age of 12. But for all that, I blessed the deity who made me, that I had inherited little from my mother except her slender build, and height.

I used to wonder why she and my father had ever married because she undoubtedly despised his immigrant Italian ancestry and flaunted her own WASPishness at every opportunity. Her hair was blonde and coiffed, her eyes blue and sharp, her complexion strawberries and cream.

It didn’t surprise anyone, least of all me, when I jumped the moment I was pushed, and found myself a bride at the age of 19. The year was 1990.

What David saw in me is less easy to understand. A young wife with European aspirations perhaps, fluent in Italian and with an appreciation of wine that was unexpected and, later, unwelcome. I was different enough from the other Navy wives to mark him out for distinction and myself for alienation and loneliness.

The other wives tried very hard to include me in their artificial social whirl—coffee mornings, lunch dates, baby-sitting, play dates for children I didn’t have, and ‘drinks with the girls’.

They weren’t unkind, merely satisfied with their lives; happy at home and fulfilled with their roles in a way I could never be. I was too young, too myopic and too self-contained to see the pitfalls of my willful isolation. I went to their book club once, but when I found they preferred bestsellers and romances to the chilling wildness of Hemingway, or the maverick prose of Nabokov, I had nothing to say and we merely stared at each other with fragrant disdain.

There was one thing about me that pleased my husband—I was athletic. He taught me to sail a dinghy and later a yacht; I could shoot almost as well as the Corps’ best marksman; I was fearless of heights and I could dive from the top diving board at the Base swimming pool.

Those were the only things he liked about me, and even that was limited to the first twenty months of our marriage. He hated the way I dressed, the way I spoke, what I spoke about and the things that interested me to speak about. In the end, the irony was that he wanted me to be more like the other wives, while relishing my alienness. It was confusing and wearying and I didn’t know how to be myself. I think that during those early years I forgot how. So I wore the clothes he liked and kept my mouth shut ... a slow descent into silence.

By the time we realized that children weren’t going to happen for us, well, for him, I had undergone a number of invasive and unpleasant examinations and, blaming each other, we had both lost interest in procreation; fortuitous happenstance, I suppose. Sex was desultory and uninspiring. I was uninspired. I was dull.

After two years of marriage, David was transferred to the Naval Medical Center in San Diego and he very much wished me to be friends with the wife of his new CO. Estelle was everything that I was not—poised, charming and perfect. She was also cold, controlling, and a snob. I loathed her. The feeling was mutual. But for the sake of appearance, we cultivated a chilly friendship. It was easy for her to fake; less so for me. I pitied her child, perhaps feeling some kinship with his loneliness. Sebastian was eight years old; I was 21.

He was cursed with sensitivity, and with his bitch of a mom and his monster of a dad, he was damned twice.

Between us there arose a sweet and gentle friendship. Sebastian got into the habit of dropping by after school to tell me about his day. I’d pour him an alcohol-free limoncello made from Sorrento lemons, when I could find them, syrup and soda. We talked about books that he’d read and I would suggest stories he might enjoy—the stories I had read as a child that were far removed from the anodyne books his mother thought suitable. Together we worked our way through the casual brutality of the Brothers Grimm and easy psychopathy of Hans Christian Andersen, whose little mermaid felt the pain of knives slicing into her feet when she walked, and whose angelic voice was bargained away for love.

At about this time my dear father came to stay. My mother, of course, was too busy—involved with her clubs, her Bridge, and her good deeds for everyone but her family. It was a relief to us all, although David was determined to remind us of, and lament her absence at every meal.
Such a fine woman
.

Sebastian and my father adored each other and happily spent hours together making model airplanes and blowing them up with the powder extracted from fireworks. David disapproved, of
course, so—from him—they hid most of their activities. It was their special time, innocent and childish, if typically destructive play.

One day Sebastian entered my kitchen when we failed to hear his knock. ‘Madame Butterfly’ was playing at full volume and my father and I were wailing along to the wonderful lyrics of ‘Un Bel Di’.

“What are you singing?”

Sebastian frowned and my father looked puzzled. “I don’t understand what Papa Ven is saying.”

“You’re speaking in Italian, papa,” I said, smiling. I turned to Sebastian. “He says he’s singing to God.”

Thereafter, every day of my father’s visit, Sebastian learned a few more words of Italian; not all of them were entirely suitable for a child of his young years, but my father had a wicked streak in him. As it turned out, one that I inherited.

I was reasonably happy in San Diego. I became involved with the Base’s magazine and helped out on open house days at the Base or the hospital. I had even put in an application to go to evening classes in journalism, one of the few individual forays I had ever made. It was at this time that David informed me he’d been assigned to Camp Lejeune in North Carolina, and that we were leaving. It was another sideways move for an officer who had failed to live up to his early promise. David chose to see it as a promotion, but then he would.

Within 48 hours, David had disappeared to the far side of the continent, and I had a week to watch the contents of our little home being packed into containers.

Sebastian came to see me every day; every day he cried.

And then, on a Tuesday in September, I was gone.

Heirs to Forgotten Kingdoms by Gerard Russell
So You Call Yourself a Man by Carl Weber
The Land Leviathan (A Nomad of the Time Streams Novel) by Michael Moorcock
Forbidden, Tempted Series (Book 1) by Selene Charles
His Dakota Bride (Book 5 - Dakota Hearts) by Mondello, Lisa
Infested by Mark R Faulkner
Moby Jack & Other Tall Tales by Garry Kilworth
Do the Work by Pressfield, Steven
Prince of Thorns by Mark Lawrence
Rise by Anna Carey
Our partner