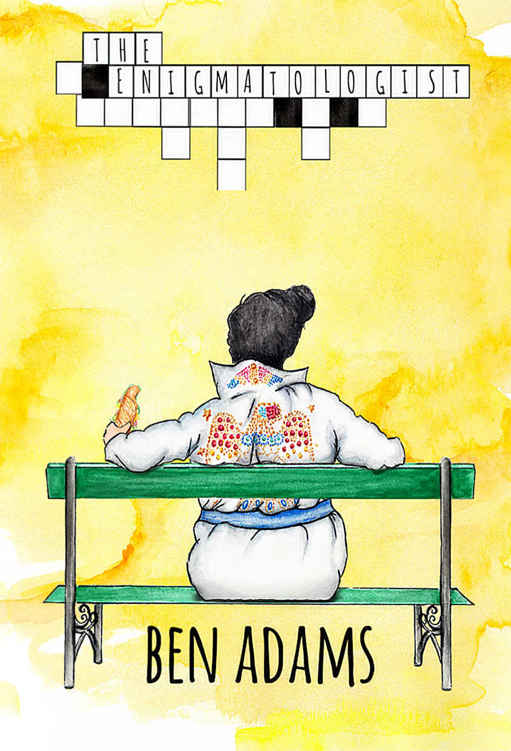 (An Imprint of Ravenswood Publishing)

Names, characters and incidents depicted in this book are
products of the author's imagination, or are used fictitiously. Any resemblance
to actual events, locales, organizations, or persons, living or dead, is
entirely coincidental and beyond the intent of the author or the publisher.

All rights reserved. No part of this
book may be reproduced or transmitted in any form or by any means whatsoever,
including photocopying, recording or by any information storage and retrieval
system, without written permission from the publisher and/or author.

John
Abernathy watched them from behind the bushes, the man in the car wearing a
rubber ducky mask, an e-cigarette between the orange and latex beak, the
woman’s head bobbing in his lap. John didn’t know the woman’s name, but the man
was Randall Neilson, his client’s husband. Mrs. Neilson had walked into
McGullicutty
and Sons Private Investigations a week
earlier, needing her suspicions confirmed. Rooftop, John’s boss, gave him the
case, thinking it’d be easy, photographing a cheating husband in the act. John
had been following Mr. Neilson for a couple of days, sitting in the
Village Inn
next to his office,
waiting for him to leave work. Usually, he went straight home to John’s client,
but tonight, Mr. Neilson headed to the
Genesse
Mountain Lookout parking lot just outside of Denver to meet his girlfriend.

John pushed his glasses back up, adjusted the zoom lens as
the couple moved to the back seat. For the first time since she got in the car,
John saw the woman’s face. She flipped the hair out of her eyes, tolerating
Randall grunting behind her. She put her hand against the window, bracing
herself. Her palm slipped on the slick glass, her fingers getting snagged in
the latch. The door popped open. She tumbled out, but caught herself, skinning
her hand on the ice and gravel. A can of Axe body spray rolled from the car,
clinking against the frosted asphalt. The dome light glowed dull yellow, giving
John a clear shot of their faces. He started taking pictures again.

She dragged herself from the car. Her navy blue skirt was
bunched around her waist and she pulled it down. Randall crawled out after her,
holding his unzipped pants. He tore off the mask and tossed it in the back
seat. She brushed crisp ice from her palms, tears building. Randall tried to
grab her, soothe her, but she twisted loose.

“Is this ‘cause I asked you to wear those Care Bear
pajamas?” Randall asked, zipping up his pants. “Because that was a one-time
thing.”

She spun and slapped him. And walked to her car, barefoot,
shoes in one hand, holding her shirt closed with the other.

Randall Neilson picked up the can of Axe body spray and
spritzed some on his bare chest. The wind carried the fumes to John, the
gag-inducing smell of teen exasperation, moose testicles, and entitlement. He
put his hand over his mouth, suppressing the coughs building in his throat.
Randall tossed the can in his car, leaving the cap on the pavement, and drove
away shouting at the woman through his open window.

She gripped the top of the steering wheel, rested her head
on her hands, and cried.

He felt the urge to go to her, console her, but heard
Rooftop’s voice, reminding him that he was there to observe and record, not to
get involved, that he needed to remain separate, in the shadows.

She lifted her head from the steering wheel, started her
car. The car exhaled gray exhaust into the night. She backed out, paused for a
moment, then revved her engine and sped from the lot, tires spraying loose
snow.

John tugged his wool hat down around his ears. He wiped
May snow and mud from the knees of his secondhand corduroys, and put his bare
hands in the pockets of his black pea coat, drew it closer to his slender frame
and slogged to the empty lot. Melted ice had seeped into the gap between the
loose rubber sole and tip of his left black Converse All-Star, soaking his sock
and toes, and John stopped intermittently to kick snow from it.

The lot was quiet. The only sound came from trees bending,
trying to hold against the wind. And John’s crunching shoes. He stooped and
picked up the cap Randall had left in the parking lot and tossed it in the
trash.

The breeze shifted, whispering in his ear. It chilled John
through the layers of wool and cotton. Standing in the ice-covered parking lot,
he felt uneasy, like someone was behind him, watching,
their
eyes pushing against him.

A branch cracked near the set of trees where John had been
hiding, like someone stepped on it. Startled, he jumped. John tried looking
through the tangled brush. Stars were starting to appear, competing with
Denver’s evening glow, and his eyes were only beginning to adjust to the
oncoming night, but every shaded trunk and overgrown bush looked like something
sinister hid behind it.

John stood upright, stiff. Up until then, he had thought
he was alone. But he wasn’t. Someone prowled the forest, observing him.

John took a step back, fumbled in his pants pocket for his
keys. His car was just down the road.
A quarter mile of ice
and slush.
He’d have to run for it. He didn’t think he could outrun
whatever was back there, especially over tire-crushed dirt and snow. Giant
trees and lack of streetlights had darkened the road. John pivoted toward it,
digging the rubber tips of his Chucks into the ice.

Snow fell from the trees, crashing and breaking limbs.
John sighed. That’s what it must have been, heavy snow on a dead branch.

“Well,
Mrs. Neilson,” John said, sitting behind a desk in the Blake Street office. She
sat in a wooden chair across from him, fogged in perfume that nearly strangled
him. “As you know, I’ve been following your husband for the past couple of
days.”

Rooftop stood behind him. He leaned against the
windowsill, observing his young assistant. He was a squat man, like the gravity
of his profession had compressed him. His
bald head
,
the tufts of gray hair ringing it, barely reached the window sash.

“Yesterday,” John continued, “I witnessed him leaving work
shortly after five. As you can guess, he didn’t go straight home.” He tapped
the manila folder on the desk. “There’s no easy way to say this.” John slid the
folder over to her, proud to be showing Mrs. Neilson his portrait of her
husband.

Mrs. Neilson opened it, started flipping through the
photos like a magazine at the hair salon.

John had witnessed Rooftop give this same speech several
times over the past year. He had memorized and internalized it, knew what to
expect. And right then, he expected her to start crying, disbelief and grief
taking over. He dropped his arm and opened the desk drawer. Without looking, he
reached for a box of tissues, readied to offer them.

“What the fuck is this?”

“Yeah, I heard that part. I mean this.” Mrs. Neilson
pulled out a picture, pointed to the woman in it. “That’s my goddamn cousin!
Wearing my clothes!”

“In every single picture! Look at this! That trailer park
bitch is soiling everything. Is she wearing my jewelry? Now I have to go home
and wash that skank’s stank off everything.”

“I think we need to focus our attention on what’s
important. You now have evidence that your husband’s been unfaithful,” John
said, trying to remain professional.

John slammed the tissue drawer closed. Behind him, Rooftop
cleared his throat.

“And you, this is how you tell me?
with
pictures of my husband fucking in the backseat of the
LeBaron
?
That’s where we put our car seat for Christ’s sake. No wonder my baby’s getting
sick.”

“What are you, a fucking doctor? Of course she’s allergic
to skank stank. She’s a classy baby.”

“She obviously takes after her mother.”

“What the fuck did you just say?”

“John,” Rooftop interrupted, his hand on John’s shoulder,
“why don’t you go make us some coffee?”

“Whatever.” John went into the storage room, brewed coffee
among the filing cabinets, hotplate, cot, and spare suits hanging from nails
driven into the wall.

Rooftop sat behind the desk. He barely peeked above the
wooden plane, his
bald head
like a rising moon. The
storage room windows were thick and John struggled to hear the few words
Rooftop said. Mrs. Neilson wiped her fingers under her eyes and started crying.
Rooftop pulled the tissues from the desk and offered them.

“Un-fucking-believable.” John shook his head in disbelief
and ran his hands through his thick brown hair.

The caller ID said the number was from California,
although John didn’t recognize the area code. He turned off the ringer and
lowered the answering machine speaker volume.

John returned with coffee. Mrs. Neilson nodded her head,
agreeing with something Rooftop had just said. She blotted her eyes, sniffling.

“Thank you, Mr.
McGullicutty
,”
she said, digging in her purse. She put a check on the desk. “This has been
very enlightening.”

“And you, Mr. Abernathy,” Mrs. Neilson said, “I’m
definitely talking about you in my Yelp review.”

She slammed the door. John and Rooftop listened to her
walk away, her high heels clicking against the marble floor of the hall.

“She was just…” John looked at the door. “It’s not what I
expected.”

Rufus
McGullicutty
had been a
good friend of John’s grandfather. His grandfather had given Rufus the nickname
‘Rooftop’ when they were kids, because ‘he was so short he’d never see the roof
of his own house.’ When John’s father disappeared, Rooftop looked after John
like a son, even offering him a job as his assistant when John graduated from
The Boulder School of Esoteric Art and Impractical Design, a job John always
told himself was temporary.

“You’re going to have difficult clients. It’s part of the
job. Got it?”

“This whole thing, it’s not what I expected.”

“I told you, this is what we do.” Rooftop gripped the
pictures, shook them at John. “We’re paid to take pictures. That’s it. This
isn’t anything glamorous like the movies. There are no car chases or
shoot outs
. You never get the girl. If you want excitement,
go do something else. If you want a regular nine-to-five behind a desk, go do
something else. This job is not fun. Got it?”

“It shouldn’t be like this!” John gestured to the photos
Rooftop held. When he started working for Rooftop, he thought it’d be easy,
take a couple of pictures,
design
crossword puzzles in
his free time. He never anticipated the reaction he’d have, the anger and
hopelessness he felt when he photographed grown men taking their pants off.

“Did they teach you that in that fancy art school?”

“They never told us we’d be working some shit job that'd
make us miserable.”

“We all got to do something,” Rooftop said, tossing the
folder onto the desk.

“You quitting on me? Is that it? What are you going to do?
go
back to The People’s Republic of Boulder, work in a
coffee shop?”

“That’s where all the Advanced Pictorial Ceramics majors
work. I can’t work with them. They’re cliquey.”

“Cliquey? What the hell’s ‘cliquey’? Look, kid, you got a
good job here. I know it’s not
enemagraphy
or
whatever.”

“
Enigmatology
. Writing puzzles.
You know this.”

“Enigma
shmigma
, whatever,”
Rooftop said. “Look, you got it pretty good here, kid. The work is steady. The
money’s good. More than what those Ceramics kids are making, I bet.”

John tapped the
waste basket
with
his toe. The few crumpled tissues inside the can moved slightly, then settled
back into place.

“You’ve been doing this for a long time,” John said. “How
do you deal with it? with people like that?”