The Epic of New York City 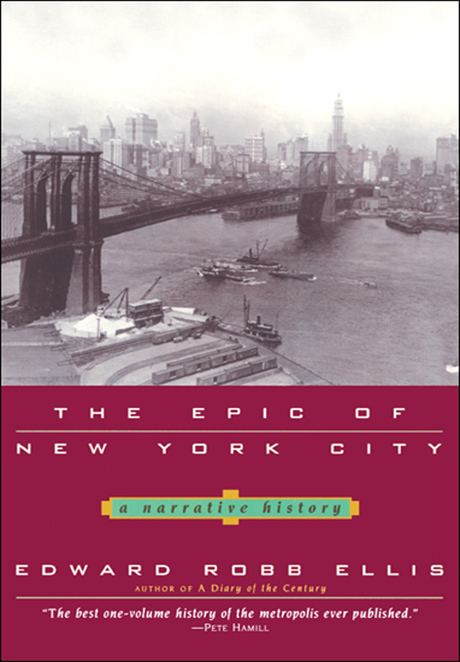 Praise for
The Epic of New York City

“A magnificent, modern chronicle. . . a fat compendium. . . . Every page boasts something of interest.”

“The best one-volume history of the metropolis ever published.”

A Diary of the Century: Tales from America's Greatest Diarist

“If there were a Guinness record for heart, Ellis would win that, too. This is a diary of the century, all right. But more movingly, it is the life of a man.”

“It is Ellis's unfailing humanity and honesty that make
A Diary of the Century
an important and irresistible document. . . . Akin to Copland's glorious âFanfare for the Common Man'”

A Nation in Torment: The Great American Depression

“An encyclopedic beauty [and] a terribly valuable chronicle. . . . Like Barbara Tuchman . . . fascinating. “

E
DWARD
R
OBB
E
LLIS
was born in Kewanee, Illinois, in 1911. At fourteen he knew he wanted to become a journalist and an author. At sixteen he began keeping the diary that became the basis of his 1995 book,
A Diary of the Century: Tales from America's Greatest Diarist. The Chicago Tribune
called Ellis's diary “a jewel of Americana.”

As a newspaperman, he worked at the
New Orleans Item,
covering Huey Long, Louis Armstrong, the city's hungry workers, and the French Quarter. In the 1930s he joined the Oklahoma City Times, writing about the Great Depression, the dust bowl, and Eleanor Roosevelt. As World War II began he was at the
Peoria Journal-Transcript
before moving to Chicago, where he became a feature writer for United Press. During the war Ellis edited a navy newspaper on Okinawa. In 1946 the Chicago Newspaper Guild named him the city's best feature writer.

In 1947 Ellis joined the
New York World-Telegram,
where he worked for the next fifteen years, winning wide attention for his feature stories about world leaders, Nobel laureates, theatrical stars, and New York characters. After retiring from reporting in 1962, Ellis embarked on a career as a full-time author, publishing
The Epic of New York City
in 1966, which the
New York Times
called “a magnificent modern chronicle.”
A Nation in Torment,
Ellis's narrative history of the Depression, received the Friends of American Writers Literary Award in 1970.
Echoes of Distant Thunder,
on the United States during World War I, was published in 1975. Ellis was also an associate editor of
The Encyclopedia of New York City.

Mr. Ellis, whose books are cited in the bibliographies of such notable authors as Robert Caro and David McCullough, lived in New York City from 1947 until his death on Labor Day, 1998. He spent his days tending his 15,000-volume library and faithfully recording his life and times in the pages of his epic diary, which he deeded to the special collection of the Bobst Library at New York University.

To the Memory of My Beloved Wife

First published by Carroll & Graf in 2005

All rights reserved. No part of this book may be reproduced in any manner whatsoever without written permission except in the case of brief quotations embodied in critical articles and reviews. For information, address the Perseus Books Group, 387 Park Avenue South, New York, NY 10016â8810.

Basic Books are available at special discounts for bulk purchases in the United States by corporations, institutions, and other organizations. For more information, please contact the Special Markets Department at the Perseus Books Group, 2300 Chestnut Street, Suite 200, Philadelphia, PA 19103, or call (800) 255-1514, or e-mail
[email protected]
.

A DIARY OF THE CENTURY

A NATION IN TORMENT

THE EPIC OF NEW YORK CITY

Those who do not remember the past
are condemned to relive it.

T
HIS
is a narrative history of New York City.

Some readers may complain about its length. I could remind them that a six-volume New York history runs to more than 4,700 pages, and another four-volume work contains more than 2,500 pages. While I worked on this book, my most painful problem was deciding what to omit. In selecting my data, I kept asking myself three questions: Is it true? Is it significant? Is it interesting?

Other readers may lament that I left out such and such a person, place, event, or institution. For every omission they might cite, I could adduce many they forgot. Instead of trying to include every date and happening, thus producing a chronicle or encyclopedia, I chose to focus on particular episodes and people.

Above all, I have tried to tell a story. In narrative form, this book attempts to trace the evolution of New York City and reveal its organic relationship to the rest of the United States and all the world. Scores of smaller books describe special areas or events in the city's history. I wanted to show the big picture.

The Epic of New York City
is as accurate as I could make it. Nonetheless, I agree with Tai T'ung, who produced a history of Chinese writing in the thirteenth century and said, “Were I to await perfection, my book would never be finished.”

Many kind people helped me. I owe especial gratitude to my literary agent, Lurton Blassingame; my editor, William Poole; and my friend, Tom McCormack. I give thanks to my neighbor, Joseph
Nathan Kane, author of many excellent reference books. I fondly remember the help I got from my favorite book dealers, Stephen Seskin, David Mendoza, and Edward A. Gradijan.

I owe most of all to my wife, Ruth Kraus Ellis, who did not live to see this book in print. She shared my enthusiasm, sustained me in moments of depression, cared for my creature comforts to conserve my energy, and was the most efficient and willing assistant any writer could have. For all these reasons, plus the fact that she was born on Manhattan, I call this the book of Ruth.

Punk'd and Skunked by R.L. Stine
Just a Little Hope by Amy J. Norris
Why Leaders Lie by Mearsheimer, John J.
The Missing Mitt by Franklin W. Dixon
The Wrong Side of Dead by Jordan Dane
Always: You'll Never Walk Alone by Whiting, Keith
Dragonmark by Sherrilyn Kenyon
A Commonplace Killing by Siân Busby
Flowing with the Go by Elena Stowell
Covert Evidence by Rachel Grant
Our partner