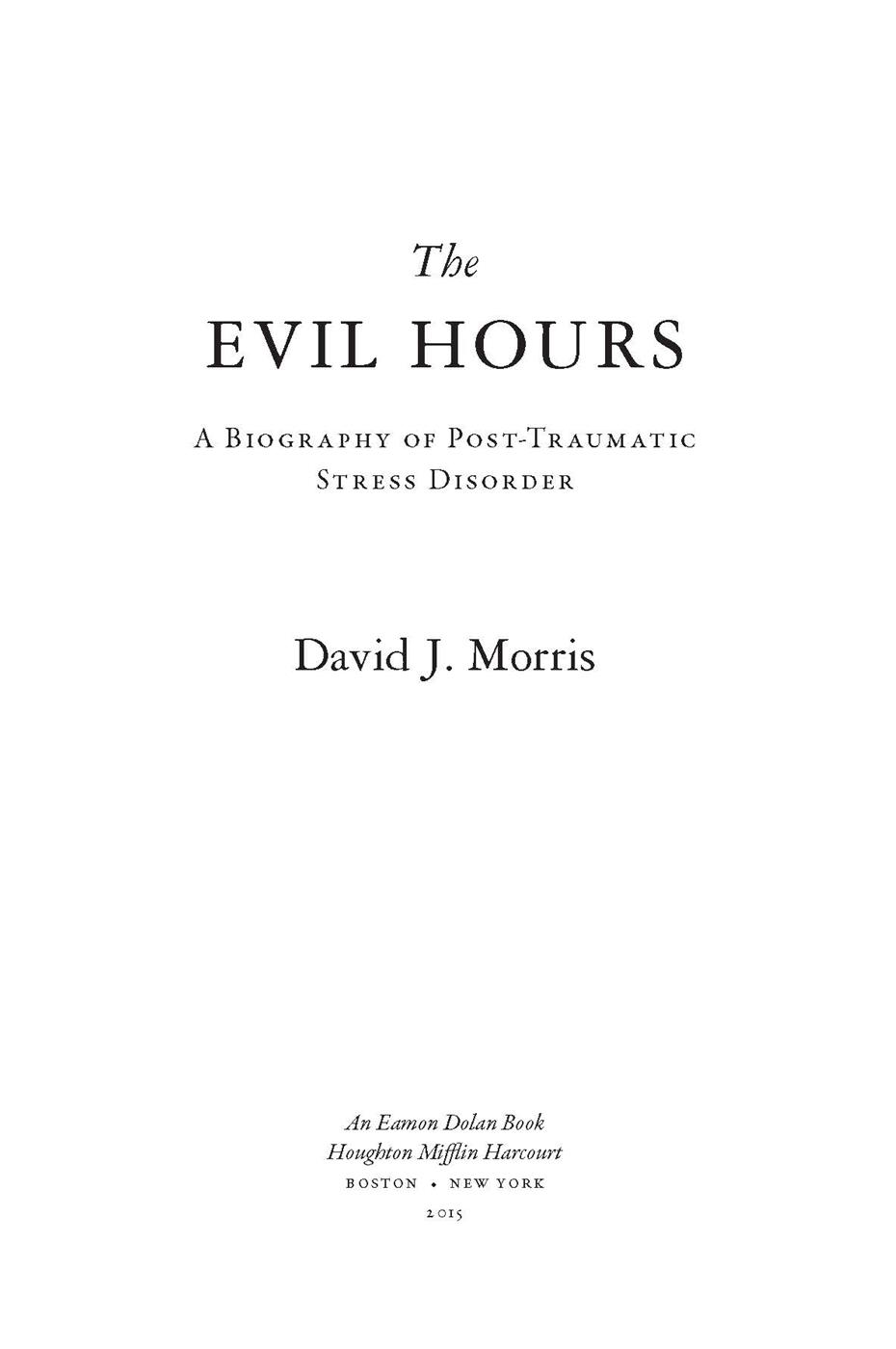 Toward a Genealogy of Trauma

The Library of Congress has cataloged the print edition as follows:
Morris, David J., date.

Heraclitus's Fragment 62 is from
Fragments: The Collected Wisdom of Heraclitus
by Heraclitus, translated by Brooks Haxton, translation copyright Â© 2001 by Brooks Haxton. Used by permission of Viking Penguin, a division of Penguin Group (USA) LLC.

This book presents the research and ideas of its author. It is not intended to be a substitute for consultation with a mental health professional. The publisher and the author disclaim responsibility for any adverse effects resulting directly or indirectly from information contained in this book.

This book is not affiliated with or endorsed by the Department of Defense or other instrumentality of the United States.

How many a brief bombardment had its long-delayed after-effect in the minds of these survivors, many of whom had looked at their companions and laughed while inferno did its best to destroy them. Not then was their evil hour; but now; now, in the sweating suffocation of nightmare, in paralysis of limbs, in the stammering of dislocated speech. Worst of all, in the disintegration of those qualities through which they had been so gallant and selfless and uncomplainingâthis, in the finer types of men, was the unspeakable tragedy of shell shock .Â .Â . In the name of civilization these soldiers had been martyred, and it remained for civilization to prove that their martyrdom wasn't a dirty swindle.

A modern disease, as it is comprehended in a laboratory, is explained to the laboratory technician, the student, and the layman as a phenomenon made up of its own pimples, rash, swelling and development. The disease is never presented as a creatureâreal or metaphoricalâa creature that might have an existence separate from its description, even as you and I have an existence from the fact that we weigh so many pounds and stand so many inches tall.

Out of respect for their privacy, I have changed the names of some of the people who appear in these pages.

Have you ever been blown up before, sir?

Everything was fine until it wasn't.

Apophenia: finding patterns where there shouldn't be patterns.

These were the words I wrote in my journal on October 9, 2007, the day before I was almost killed by a roadside bomb in Baghdad. The last line I wrote in the days afterward. Later, I went back and underlined it in a different colored ink, as if to emphasize that I had come back to it in a different state of mind. As if I were leaving a clue for some future version of myself.

I was in Iraq for my third reporting trip and had gone out on a patrol with some soldiers from the First Infantry Division into Saydia, a neighborhood that seemed, at least on the surface, to be relatively peaceful. On our way back inside the wire, one of the soldiers asked nonchalantly if I'd ever been blown up before. I considered the question for a moment, and then, as the silence deepened, I sensed that something was amiss. The words came awkwardly as I explained that while I had spent the summer before in Ramadi, at that point the deadliest city in Iraq, I was still a virgin in that particular area.

It was like my fate had been spoken: I had never been blown up before, but everyone in the Humvee knew that was about to change.

According to the laws of grunt superstition, I was the injured party, but somehow I managed to feel bad for the kid who'd asked the question. As it happened, the soldiers in the Humvee were from all over Latin AmericaâPeru, Mexico, Guatemalaâand they began pummeling him in a variety of languages and accents for what he'd done.

At the time, I felt embarrassed more than anything else and just wanted the moment to end. I didn't like being the topic of conversation, and it took everything I had to avoid thinking about being blown into tiny red pieces. This, in fact, was one of the first head tricks I'd learned in Iraq, to systematically ignore the obvious: you were always just about to dieâget over it. I was wasted, too, and my mind wasn't right. I had been in Iraq for a total of nine months by this point, and even though I had seen people killed by roadside bombs, I'd never been hit myself, and somehow I'd come to feel that I had my luck under control. But in posing the question, it was as if the soldier had stolen that control, thrown me over to the forces of chance that I had worked so hard to insulate myself from.

Later, I interviewed a prominent psychoanalyst, who told me that trauma destroys the fabric of time. In normal time, you move from one moment to the next, sunrise to sunset, birth to death.
After trauma, you may move in circles, find yourself being sucked backwards into an eddy, or bouncing about like a rubber ball from now to then and back again. August is June, June is December. What time is it? Guess again. In the traumatic universe, the basic laws of matter are suspended: ceiling fans can be helicopters, car exhaust can be mustard gas.

Another odd feature of traumatic time is that it doesn't just destroy the flow of the present into the future, it corrodes everything that came before, eating at moments and people from your previous life, until you can't remember why any of them mattered.

What I previously found inconceivable is now inescapable: I have been blown up so many times in my mind that it is impossible to imagine a version of myself that has not been blown up. The man on the other side of the soldier's question is not me. In fact, he never existed.

Have you ever been blown up before, sir?

Over the past four decades, post-traumatic stress disorder has permeated every corner of our culture. A condition that went unacknowledged for millennia, and began its public life with a handful of disgruntled Vietnam veterans “rapping”
in the offices of an antiwar group in midtown Manhattan in December 1970, has spread to every nation on the globe, becoming in the words of one medical anthropologist a kind of “psychiatric Esperanto.”
A species of pain that went unnamed for most of human history, PTSD is now the fourth most common psychiatric disorder in the United States.
According to the latest estimates, nearly 8 percent of all Americansâtwenty-eight million peopleâwill suffer from post-traumatic stress at some point in their lives. According to the Veterans Administration, which spends more annually on PTSD research and treatment than any organization in the world, PTSD is the number one health concern of American military veterans, regardless of when they served. In 2012, the federal government spent three billion dollars on PTSD treatment for veterans, a figure that doesn't include the billions in PTSD disability payments made every year to former servicemembers.

Since the attacks of 9/11, when public awareness of the disorder gained momentum, PTSD (a condition characterized by hyperarousal, emotional numbness, and recurring flashbacks) has, to the dismay of some international aid experts, supplanted hunger as the primary Western public health concern when a war or other humanitarian crisis hits the news.
PTSD is one of the newest major psychiatric disorders to be recognized, and yet today it has entered the public lexicon to the degree that it is not uncommon to hear journalists describing entire countries as being stricken with it and writing lengthy articles debating whether or not Batman might be suffering from it. Consumers who are so inclined can now go online and purchase a commemorative patch for $5.99 that reads
P.T.S.D.: NOT ALL WOUNDS ARE VISIBLE
. As any trauma researcher will tell you, PTSD is everywhere today.

And yet, like many mental health disorders, there is broad disagreement about what exactly PTSD is, who gets it, and how best to treat it. There remains a small but vocal cadre of researchers who argue that PTSD is a social fiction, a relic of the Vietnam War era foisted upon the global community by well-meaning but misguided clinicians, and that by, in essence, encouraging people to be traumatized, we undermine their recovery.
A condition born of strife, PTSD is dominated by conflict in its scientific life as well. There is, however, little disagreement that survivors of rape, war, natural disasters, and tortureâthe events that are generally recognized to lead to PTSDâexperience profound, even existential, pain in the aftermath of such events. This brand of suffering has become so widely recognized that it has in fact permanently altered the moral compass of the Western world and changed our understanding of what it means to be human, what it means to feel pain.

Pierre Janet, a French neurologist writing in 1925, observed that emotional reactions to traumatic events can be so intense as to “have a disintegrating effect on the entire psychological system.”
This book is about that effect and what it looks and feels like from the inside. Over time, PTSD has changed not only the way humans understand loss but also how humans understand themselves generally;
I am interested in it both as a mental condition and as a metaphor.
How people respond to horrific events has always been determined by a complex web of social, political, and technological forces. For most of human history, interpreting trauma has been the preserve of artists, poets, and shamans. The ways in which a nation deals with trauma are as revealing as its politics and language. The ancient Greeks staged plays that were written and performed by war veterans as a communal method for achieving catharsis.
Today, for better or worse, we deal with trauma and horror almost exclusively through a complex, seemingly arbitrary cluster of symptoms known as post-traumatic stress disorder. In the classical world, the ancients in the wake of trauma might look for answers in epic poetry, such as
The Iliad
or
The Odyssey
. Today, we turn to the most current edition of the
Diagnostic and Statistical Manual of Mental Disorders
. This fact alone is worthy of further exploration: most of us no longer turn to poetry, our families, or the clergy for solace post-horror. Instead, we turn to psychiatrists. This is, historically speaking, an unusual state of affairs.

Before 2011, I had never seriously considered the question of post-traumatic stress, either in myself or as a general subject. I returned home in 2007, as I had returned from all of my reporting trips to Iraq, with a powerful feeling of alienation from my countrymen. Freshly deplaned from what I understood to be the defining event of my generation, I discovered to my great surprise that no one back home held this view or seemed to have given much thought to the war. Like Nick Carraway returning from the East in
The Great Gatsby
, I came home expecting to find the world “at a sort of moral attention.”
When this didn't happen, I was disappointed. The war had changed me, enlarged me in some way, made me feel as if history was a tangible force in my life, and seeing the workaday world, people with their looks of practiced oblivion, put me on edge. The writer in me secretly wished for something similar to what had happened before, perhaps something out of the Vietnam era: people marching in the streets, students debating the war's meaning on college campuses, the war making itself felt at home in some visible way, the loss given some physical form.