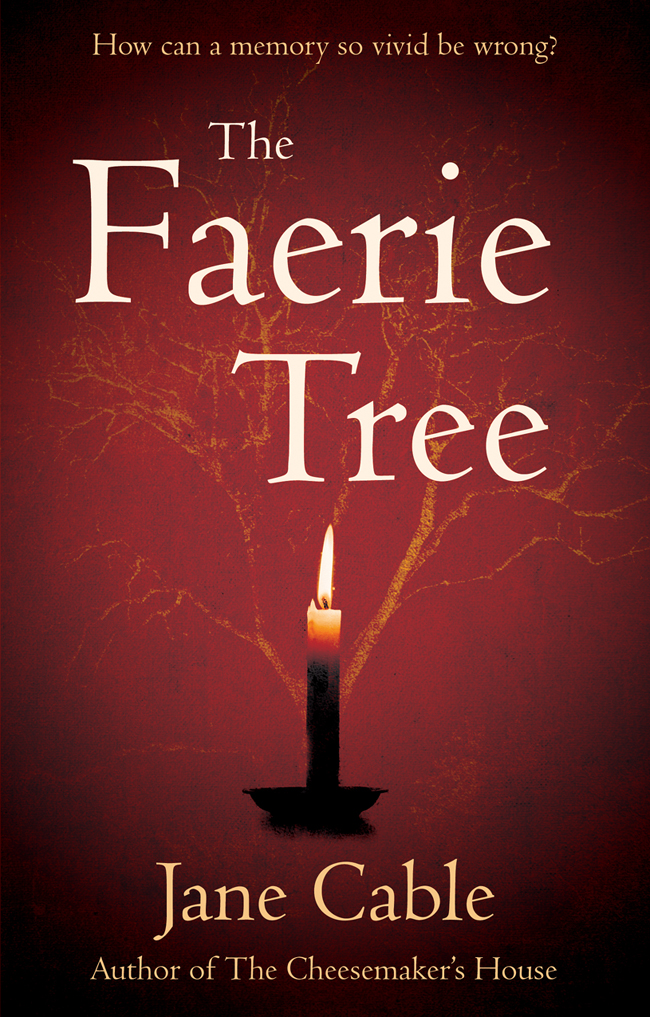 Born and brought up in Cardiff, Jane Cable now lives on the Sussex Hampshire border with her husband. In 2011, her debut novel,
The Cheesemaker's House
, won the Suspense & Crime category of The Alan Titchmarsh Show's People's Novelist competition. Find out more at
www.janecable.com
.

The Faerie Tree
was inspired by an oak in the National Trust woods at Curbridge, next to the River Hamble; a tree festooned with ribbons, beads and small toys; a magical place where children leave letters for the fairies â and the fairies reply.

Praise for
The Cheesemaker's House
:

“I desperately want to find out about Owen; a fascinating characterâ¦ the gift here is to make you want to read on.”

“I really loved the authorial voice â it really drew me in. But more than that I loved the fact that the initial mystery posed is one that I could not think of a possible solution for, so that really got me hooked.”

“Jane Cable's first novel is intriguing from the first page, to the last.”

“The book is easy to read, but it is also gripping, you desperately want to know what is going to happen and the characters draw you in.”

“A fantastic, mysterious story which also brings with it a wonderful tale of romance.”

“This is a book that kept me turning the pages long into the night, long after I should have been asleep.”

Apart from any fair dealing for the purposes of research or private study, or criticism or review, as permitted under the Copyright, Designs and Patents Act 1988, this publication may only be reproduced, stored or transmitted, in any form or by any means, with the prior permission in writing of the publishers, or in the case of reprographic reproduction in accordance with the terms of licences issued by the Copyright Licensing Agency. Enquiries concerning reproduction outside those terms should be sent to the publishers.

Matador
Â®
is an imprint of Troubador Publishing Ltd

In memory of my father, Mercer Simpson, who introduced me to folklore and never lost his belief in fairies
.

I think, with a second novel, there are even more thank yous than the first. But the most important one is still to my mother and my husband for their constant, patient love and for being my rocks.

More practically, my editor, the wonderful Margaret Graham, who believed in the story while helping me to see the wood from the trees. And the team at Matador who worked so hard on
The Cheesemaker's House
and who I know will be equally impressive this time around.

Thank you to friends in Hampshire, Sussex, Cornwall, Cardiff and around the world who have become book buyers, reviewers and recommenders (some of them for the first time), giving me a great deal of confidence and support at the start of my writing career. And thank you to the fantastic community of book bloggers, none of whom have I met, and many of whom I now count amongst my friends.

Finally, thank you to Jason who first showed me the fairy tree; to all the people who leave their offerings and letters there; and to the hidden hand who answers them all.

The icy air is a slap in the face after the fug of the probate office. And a slap in the face is what I damn well need, but it doesn't help and I am left feeling disorientated. I have to pull myself together. For Claire's sake, as much as anything. A father is irreplaceable, after all â a husband is, wellâ¦

She touches my arm. “Come on, Mum â let's go for a coffee now that's over.”

“I thought you had to be in college?”

The closer we get to Winchester city centre the more crowded the pavements become. The early morning shift of Christmas shoppers battles back to Tower Street car park, carrier bags thudding against their legs. Coats, handbags, reddened faces rush towards me and I sidestep into the gutter. A cyclist curses. Claire grabs my arm.

It is little better when we reach the pedestrian section of the High Street. Crowds ooze around a handcart laden with gloves and scarves. Claire fingers an emerald green one with orange
tassels but I can't stop now; I can see Caffe Nero ahead and I want to be inside, away from all this. I turn my head, that's all. I keep walking.

My face meets the softness of an anorak. It is the smell of it which makes me recoil. I look up to see a bearded face framed by straggly hair.

He melts into the crowd and Claire is tugging at my arm. But I know him; I'm sure I do. Then I'm sure I don't. How could I?

Claire sits me down at the nearest table while she queues for our drinks. She'll be gone a while. I unbutton my coat and spread it over the back and arms of the low leather chair, sliding into its lining. I close my eyes but I can still hear Christmas; instrumental carols through the chatter. A face drifts across my memory; a pair of intense hazel eyes. No. It was twenty years ago.

Claire has two mugs of latte in one hand and a plate of banoffee pie in the other.

“They've run out of trays.”

“I don't think I've ever seen it so busy in here.”

She hands me a fork and plunges the other one into the pie. “Sugar. We need it.” She savours a mouthful. “Mmmm â it's delish. Dig in.”

She nods, but she doesn't believe me. Come on, Isobel â get a grip. I clear my throat. “I'm fine, honestly. I was justâ¦ wonderingâ¦ I think I know that tramp I bumped into.”

Claire frowns. “How do you know a tramp?”

“He wasn't a tramp then. It was a very long time ago. I'd only just finished college â if I'm right, of course.”

“So what makes you think it was him?” She sounds cautiously curious.

“Two things really â his height and his eyes. You have to admit he was exceptionally tall.”

“You only came up to his chin.”

Her words stir a warm memory and I pick up my fork.

“Someone I knew before I started my teacher training. I was filling in time selling stationery and he was the office manager at one of the big firms of solicitors.”

I shrug. “People's lives change. The last time I saw him he was wearing a suit.” But that's a lie and I know it; Robin was naked â his face buried in a pillow, our duvet twisted around his legs. I ask Claire what classes she has today.

The clock ticks past eleven and Claire has to go. The crowds outside are even thicker, but through the shifting shapes of bags and coats I spy a bearded man in a grubby blue anorak sitting on the bottom step of the Buttercross â right opposite the cafÃ© door. Claire's eagle eyes don't miss him either.

“Of course I will. Now you run along and I'll pick you up from the station later.”

I do buy another coffee, but it isn't for me. I ask for a takeaway and balance some sugar and a stirrer on the lid before fighting the short distance across the street. I put the cup on the step next to the man but he doesn't look up. I am unsure now; unsure of everything and I don't know what to say, but as I turn away I hear him mumble “Thanks, Izzie.” I have only moved a few feet but I keep on walking.

The Cotton-Pickers by B. TRAVEN
The Art of Stealing Time: A Time Thief Novel by MacAlister, Katie
American Smoke: Journeys to the End of the Light by Iain Sinclair
The Bluffing Game by Verona Vale
Hunting (The Nine) by Grace, Viola
The Hostage: BookShots (Hotel Series) by James Patterson
Hawk's Prize by Elaine Barbieri
The Lost Supreme: The Life of Dreamgirl Florence Ballard by Peter Benjaminson
Succubus Shadows by Richelle Mead
Naughty Wishes Part I by Joey W. Hill
Our partner