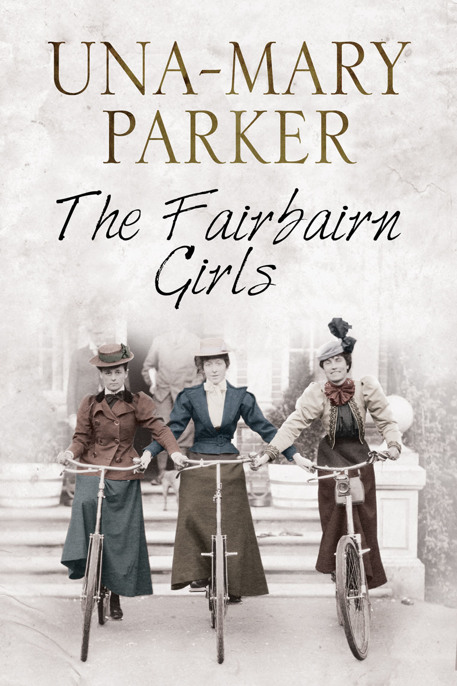 The right of Una-Mary Parker to be identified as the author of this work has been asserted in accordance with the Copyright, Designs & Patents Act 1988.

This is dedicated to my family
with all my love

If only. The words reverberated again and again in Laura’s head. If only she’d listened to her sisters. If only she’d not been so impulsive; she who was normally so careful, weighing everything up before she made a decision. Why had she rushed into it, when others had begged her to wait a bit longer? Why had her acute intuition utterly failed this time? Most of all, why had no one actually warned her?

A heavy crash from the floor above made her duck her head involuntarily. It was followed by another and another. Laura sank into a chair and buried her face in her hands. It was happening again and she didn’t know how she was going to bear it. How long would it last this time? A few days? A week? Probably longer. And what about Caroline? Fear ran in icy rivulets down her spine and a feeling of utter despair washed over her. Then she drew herself up. This would never do. She must be strong. As she walked over to her bureau, a framed photograph on a side table caught her eye. It had been taken in 1891 when she’d been seventeen, at a family gathering to celebrate her engagement to Rory Drummond.

Grouped on the lawn in front of her family’s imposing home in Argyllshire, she stood with her parents, her eight sisters, two brothers and a collection of dogs. All the girls wore long white lace and muslin dresses with large hats adorned with flowers and feathers. Papa looked so distinguished in the kilt with a velvet doublet while her mother, in a silk dress with a train, wore the biggest hat of all.

Laura studied her own likeness, taking in the girlish smile and wide, innocent eyes filled with joy, and felt a sudden stab of sadness. Papa had always claimed the family had been cursed by someone using the Rowan tree as an instrument of destruction. Superstition caused most Scotsmen to hold the Rowan in awe, for it held the power of good and evil. Laura no longer believed that. Over the years she had begun to fear that she might be the mistress of her own destruction. But as she stared at the photo she was lost in her memories of how happy she and her family had been in those days. How wonderful the future had promised to be. If only . . .

‘Come along, girls,’ the Countess of Rothbury urged. ‘The guests will be arriving in a few minutes and we must be in the drawing room to receive them. It’s getting cold out here, too. The little ones will catch a chill.’

Elegant in a pale lavender silk dress trimmed with velvet and a hat embellished with violets and roses, she tried to round up her children as she hurried across the lawn back to the castle. They were celebrating the engagement of their second daughter, Lady Laura, and to mark the occasion they’d had their picture taken, some sitting, others standing in a formal group.

The photographer, who’d been summoned from Edinburgh for the occasion, had taken longer than expected because he’d got carried away by the magnificent backdrop of a fourteenth-century castle with ramparts and turrets set amidst the mountains that rose from the stony edges of Loch Etive. It was said to be the finest castle in Argyllshire, and had been in the Fairbairn family for five hundred years.

‘It’s colder indoors than it is out here,’ observed Lizzie, the eldest, in somewhat crisp tones as she grabbed Catriona, the baby of the family, and swung her up in her arms. The other daughters chatted as they moved in a drift of white lawn and lace, the flowers on their broad-brimmed hats quivering like a herbaceous border in the stiff breeze.

Meanwhile, the Earl of Rothbury strode ahead with his favourite Labrador, Megan, by his side.

‘Hurry up, boys!’ he shouted to his sons, but Frederick and Henry were watching the photographers packing up their bulky equipment and ignored him.

‘I wish I had a camera,’ Henry said, gazing longingly at the sturdy wooden tripod and the black cases holding glass slides.

‘What would you take pictures of?’ Freddie scoffed. He was thirteen and the heir to the earldom and the Lochlee estate. Freddie considered himself to be vastly superior to his brother, who was four years younger.

‘The horses, of course. Especially Snowdrop,’ Henry replied without hesitation.

‘Oh, you and Snowdrop! You’re as bad as Papa when it comes to horses.’

‘When I inherit I’ll get rid . . .’ But Frederick’s voice was drowned out by a burst of laughter as his sisters jostled each other in their haste to get indoors as it suddenly started to rain. Their good-natured banter echoed across the lawn as they held on to their hats.

‘Come on, Laura! It’s you everyone wants to see today,’ shouted Beattie, struggling with her frilled skirt up the steps.

‘That’s right, Laura,’ Lizzie piped up. ‘You’re the centre of attention today and I’ll never forgive you for getting engaged before me! I am the eldest, after all.’

Laura’s hazel eyes were shining with amusement as she caught up with them. ‘Only by fourteen months,’ she retorted. ‘I think that seventeen is the perfect age to get married. It’s only Mama who says I’ve got to wait another year. If I had my way I’d get married next week.’

‘Come on, you two lovebirds,’ Georgie chided. ‘I’m starving. When are we going to have tea?’

Overhearing her, Lady Rothbury glanced back at her plump daughter and spoke firmly. ‘Tea will be served throughout the afternoon but you must make sure all our guests have everything they want before you go diving in, Georgie.’

Georgie’s expression became sulky and her full mouth drooped at the corners. Well developed for a fourteen-year-old, she unsettled people with her knowing brown eyes, which gave her a rather bold look.

‘I don’t see why,’ she muttered under her breath.

Georgie looked rebellious. ‘I’m not going to!’ It was so unfair, she thought. All her sisters were willowy thin and they all ate as much as her, but she was the one who put on weight.

‘You can eat as much as you like at my wedding,’ Laura pointed out peaceably.

‘Bags I actually get to the altar before you, though,’ Lizzie insisted, puffing under Catriona’s weight. ‘By this time next year who knows what might happen between me and James?’

Lizzie frowned. ‘Shhhh!’ she whispered, glancing in Beattie’s direction. ‘If
she
finds out the whole county will know about it by this evening.’

Laura nodded. Beattie was the big mouth in the family, incapable of keeping a secret.

Inside the great hall of Lochlee Castle, the butler and several footmen stood awaiting the arrival of over a hundred guests who had been invited to the afternoon reception. Excitement and expectation charged the normally uneventful atmosphere. Lord Rothbury strongly objected to having his own routine interrupted by people who cluttered up the place, chattering and expecting fuss and formality.

Today the large reception rooms were brightened by vases of flowers, and in the dining room the long refectory table was covered by a damask cloth, as white and smooth as snow. On the sideboard silver samovars gleamed in readiness to provide endless cups of tea.

The staff who worked at Lochlee, many of them since the age of sixteen, were aware that this was a special occasion: the first engagement of one of the Fairbairn girls. The housekeeper, Mrs Spry, had made sure everyone was up by dawn so that everything ran like clockwork as they polished the suits of armour that stood in the hall, cleaned and refilled the oil lamps and raked the gravel in the drive ready for the arrival of the horse-drawn carriages.

Down in the kitchen the activity had reached fever pitch as the cook, Mrs Lyddon, and her assistant finished baking the last batch of macaroons, sponge cakes crowned with icing, muffins and savoy biscuits, which the maids arranged on great silver trays and the footmen then carried up to the dining room.

The engagement of Lady Laura Fairbairn to Mr Rory Drummond, son of Sir Hector Drummond, was the talk of the county. It was thought to be a match made in heaven by many and the gossip in the village was rife. Douglas Cameron, the local postman, was the first to air his opinion to all and sundry.

‘I ken the Drummonds have a large estate in Hampshire so the wee gurril’s no fool!’ he said knowingly.

‘Och, aye! But fancy, the second daughter getting engaged before the first!’ observed Mrs McGregor, who lived next to the post office. ‘It must be putting Lady Elizabeth’s nose right out of joint. I bet the feathers flew when
that
engagement was announced.’

Now the hour had arrived when the gentry could meet the future bridegroom, and within hours their opinions of the forthcoming marriage would filter down to the working classes, who would have a fine time discussing them.

Lady Rothbury smoothed her white kid gloves and, although her heart was fluttering with anticipation, she looked calm and in complete control: a queen bee at the centre of a hive heaving with the activity of servants, who skimmed about doing their duty both inside and outside the castle.

In the vast drawing room where priceless tapestries hung on the walls and silk rugs covered the parquet floor, the family chatter was suddenly broken by the booming tones of McEwan the butler as he announced the first guests.

‘His Grace the Duke of Melrose and Her Grace the Duchess of Melrose.’ There was a pause and then more arrivals were announced. ‘Lord and Lady Gargunnock.’

In her element now, Lady Rothbury greeted each guest as if they were the most important person to grace the reception, while her husband stood stiffly beside her, nodding a brief ‘how do you do’ as if they were the last person he was interested in. Nearby, Laura stood proudly with Rory, as if she could hardly believe her good fortune, her eyes glowing with happiness and her face gently flushed.

Diana, hovering a few feet away, had never been to a grown-up reception before and she started trembling, overwhelmed by the occasion.

Beattie came up to her and put her arm gently around her sister’s waist. ‘It’s only a tea party, Di, not a ball at Buckingham Palace,’ she whispered gently.

‘But what shall I say if someone talks to me?’ Diana bleated.

Transitional Justice in the Twenty-First Century: Beyond Truth versus Justice by Naomi Roht-Arriaza
The Willful Widow by Evelyn Richardson
Christmas Eve on Haunted Hill by Smith, Bryan
Nexus by Naam, Ramez
The World Above the Sky by Kent Stetson
House of Windows by Alexia Casale
Chasing Shadows by Liana Hakes-Rucker
Emily and the Dark Angel by Jo Beverley
The Fatal Strain by Alan Sipress
The Last Passenger by Manel Loureiro
Our partner