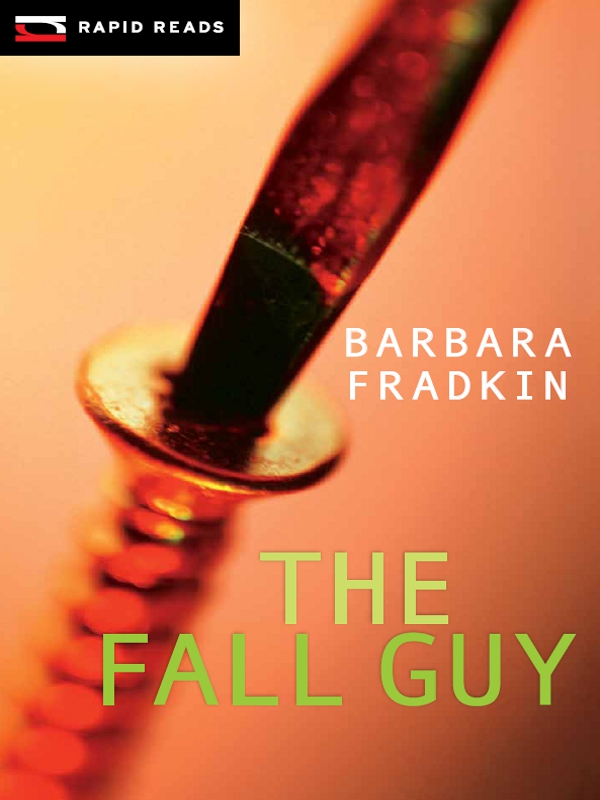 Summary
: Handyman Cedric O'Toole is set up to take the fall for a murder he didn't commit. He'll need all his inventive power to save himself. (RL 4.0)

Orca Book Publishers is dedicated to preserving the environment and has printed
this book on paper certified by the Forest Stewardship Council.

To Leslie, Dana and Jeremy

Titles in the Series

T
he first hint of trouble was when I saw the big black Buick roaring down my lane. I didn't recognize the car. But the way the guy drove, he was either showing off or too stupid to realize he'd blow his shocks in six months. Too late, he slammed on the brakes and skidded to a stop in a spray of gravel, flattening my front gate. It was an old gate, hanging by a piece of chicken wire, but stillâ¦

A few choice swear words came to my mind but died when the guy unfolded himself from the car. Six foot and easily two-fifty. Beer gut and a couple of extra chins, but I doubted that would slow him down much.

He wiped the dust off his bumper and inspected it. That seemed to take forever, as if he was daring me to start something. I didn't, even though I could feel my blood beginning to boil.

Finally he shrugged, reached into his front seat and took out an envelope.

“Are you Cedric Elvis O'Toole?”

I should have just said yes, but I didn't like his tone. Besides, I hadn't been called that in so long I'd almost forgotten it was my real name. What can I say? My mother had always expected Elvis to sweep in and marry her, but he died the day I was born. When she got over her shock, she decided Cedric would make a better name for a doctor anyway. When you're from a scrubby backcountry farm, who was going to set you straight?

I've been calling myself Rick ever since Barry Mitchell laughed out loud at roll call the first day of kindergarten.

“Who's asking?” I said instead.

“Jonathan Miller from Hopper, James and Elliston, Attorneys at Law.”

That was my second hint of trouble. There's only one law firm in the township, and Hopper and his pals aren't it. But before I could even reply, he slapped the fat brown envelope in my hand.

“A summons to appear in court.”

I let the envelope fall to the ground. A million thoughts raced through my head. Had the tax guys finally caught me? I'm just a simple handyman trying to give myself and my customers a break on the occasional job. Not the big ones that require permits or guarantees, just the little fix-its like painting the shed or repairing the chain saw. I need that couple of bucks way more than the tax man does.

Mr. Fancy Car smirked. The guy had no class. Take away the blue suit and the skinny tie, and he was just a goon. “My job is to deliver it, not read it.”

He was standing there, hands in his pockets, like he was waiting for some answer. I bent down and dusted the thing off. It felt thick enough to hold down a tarp in a gale. I started to sweat. Legal documentsâin fact, just about any documentâmade me sweat. But I tried to look cool as I tore open the flap and pulled out a stack of papers. They looked very official, like the ones I got for this piece of scrub when my mother died. She called it a farm, but no one had been able to grow anything on it except weeds for years.

I could see the guy looking around, taking in the scrap heap of rusted cars and engine bits all over the yard. I liked to invent things. Who knew when a broken lawn mower might come in handy? There were more bits of engine and metal inside the sheds. When I ran out of room for my inventions, I built another shed. The result wasn't pretty, but it had been a few years since I'd tried to impress anybody.

I did keep a few chickens and a goat, but they didn't exactly improve the look of the place. And out back on the sunny side of the barn, there was a vegetable patch I was pretty proud of. When you're an inventor still looking for that big break, you don't have a lot of spare cash to throw around in supermarkets.

Thinking about money brought me back to the papers in my hand. Even without reading them, I knew this was going to cost me money. I scanned the front page and made out the words
plaintiff
and
defendant
. Then the name in bold letters right in the middle stopped me cold.

I'd just done a job for Jeff Wilkins. A big job, building a new deck on his fancy waterfront cottage. We'd squeezed it in just under the size limit. So no permit, no paperwork, no taxes. My mouth went dry.

I put on some bluster. “What is all this about? Somebody complained?”

The smirk grew wider. “Don't you read the papers? Watch the news?”

“No,” I snapped. I never read the paper. My jerry-rigged TV antenna did a fine job of getting me the hockey games and nature shows I liked to watch, but I never bothered with the news. Who wanted to know what big-city drug dealers and snake-oil politicians were up to anyway?

Then he said the words I was most afraid of hearing.

“You might want to get yourself a good lawyer.”

A
s soon as Mr. Fancy Car peeled out of there, I was on the phone to Aunt Penny. I didn't have much money, but I did splurge on a phone. When you lived five miles down a gravel road, how else were customers going to contact you for that big job? Aunt Penny owned the little grocery store on the main highway that runs through the village of Lake Madrid. If you don't count the cottagers, Lake Madrid has maybe six hundred people, none of them from Spain. Someone was dreaming big.

Penny's Grocery has been there for at least a hundred years, and the floors tell the tale. The cottage people never shopped thereâthey used the big supermarket farther awayâbut the locals knew it's where all the gossip was. Aunt Penny stocked milk from Gerry's farm and corn from Ripple's down the road, instead of all that stuff trucked in from Peru.

Everyone stopped in to pick up gossip along with their lottery ticket and their DVD for the night.

That day, Aunt Penny sounded run off her feet.

“I got some legal documents here about the Wilkins job,” I said. “Do you know what that's about?”

“I can hardly tell that, can I, Rick, with you there and me here?”

“But I mean, has there been anything in the news?”

“About Wilkins? Oh, you mean his wife.” She stopped and I could hear her talking to a customer. I thought about Wilkins' wife. I'd seen quite a lot of her when I was working. A tiny blond who flitted around inside the house like a trapped chickadee. Wilkins hadn't given her a car, so she was stuck at the cottage watching
American Idol
and decorating shows all day. She was so bored she even tried talking to me.

Aunt Penny was back on the line. “Look, Rick, I got a lineup here. You better bring the papers over and I'll have a look.”

I hated running to Aunt Penny with my troubles. You never knew when she was going to bite your head off. Nothing warm and fuzzy about Aunt Pen. But she always seemed to sort things out. I loved the insides of an engine, and I was good with my hands, but not so much with people. I didn't actually stutter anymore, but, boy, sometimes I got so tied up in knots I just wanted to bolt from the room.

There were a whole lot of people at Aunt Penny's when I walked in. I knew every single one of them, but that didn't make it any easier. I've been the butt of jokes among the locals ever since my lawnmower-powered scarecrow blew up and scared the Canada geese from Ripple's cornfield clear into the next county, along with most of his corn.

“Hey, Rick,” said Bert Landry, piling his groceries on the counter. “That old tractor of mine mowed its last blade of grass yesterday. You interested?”

Northern Spirit by Lindsey J Carden
City of Mirrors by Melodie Johnson-Howe
The Twelfth Transforming by Pauline Gedge
Tell Them Lies (Three Little Words Book 3) by Sorensen, Karla
The Talk of the Town by Fran Baker
Peace by T.A. Chase
Jack Gregson & the Forgotten Portal by Peter Wilson
Some Like It Hot (Sweetrock Cowboy Romance Book 1) by Leighann Dobbs
A New World: Return by John O'Brien
The Cloud Roads by Martha Wells
Our partner