Read The Fallen Blade: Act One of the Assassini Online

The Fallen Blade: Act One of the Assassini 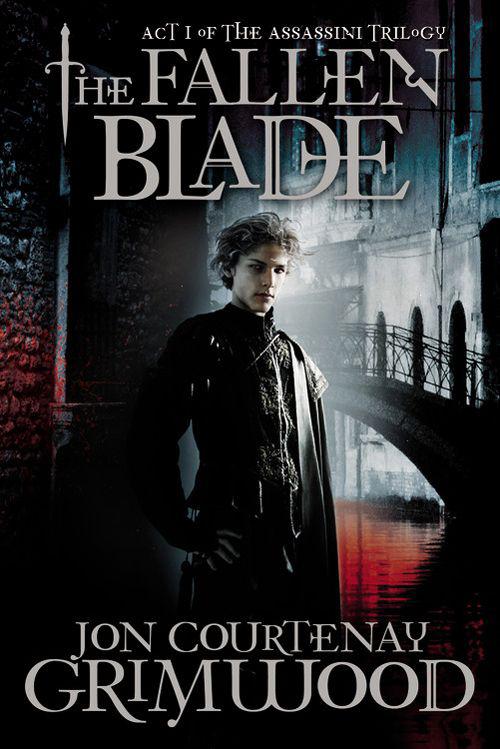 Act One of
THE ASSASSINI

who found Venice stranger than she imagined… 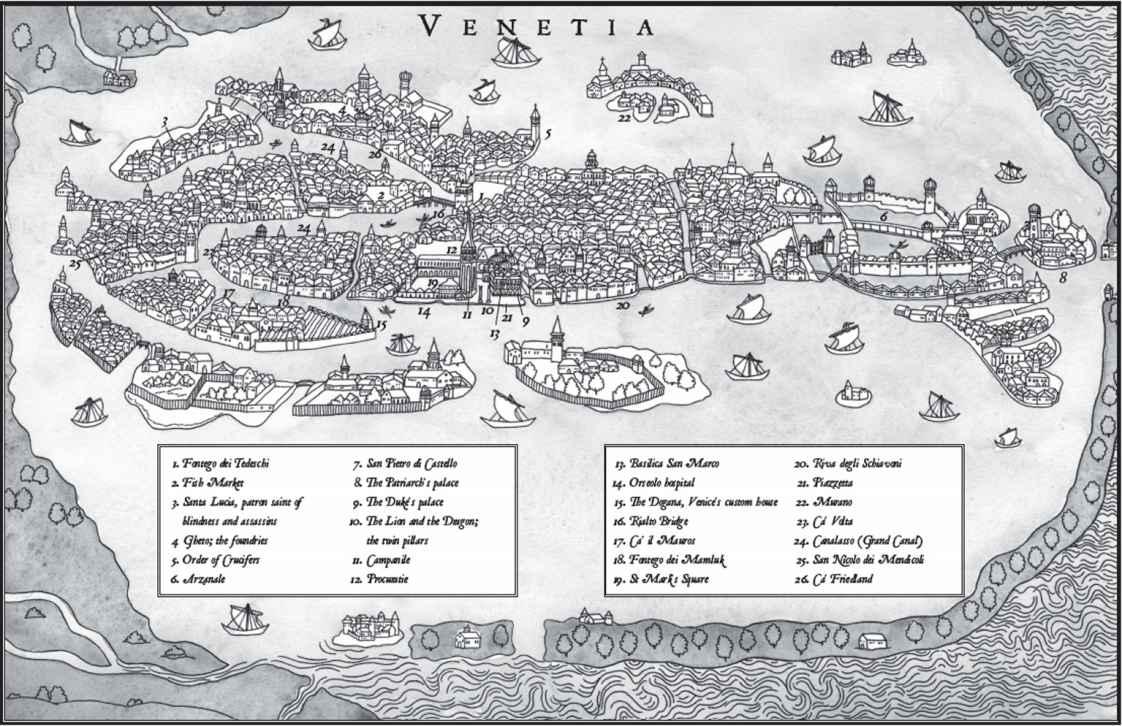 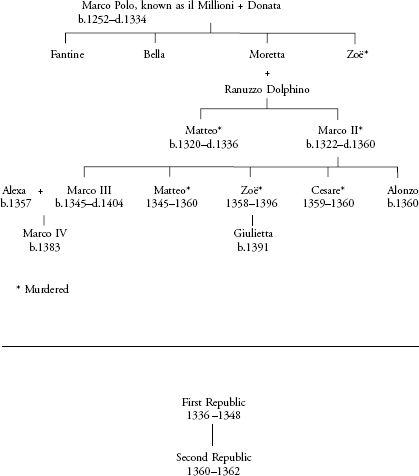 Marco IV
, known as Marco the Simpleton, Duke of Venice and Prince of Serenissima

Marco III
, known as Marco the Just. The late lamented Duke of Venice, elder brother of Alonzo and godfather of Lady Giulietta

Members of the Venetian court

Lord Bribanzo
, member of the Council of Ten, the inner council that rules Venice under the duke. One of the richest men in the city

Sir Richard Glanville
, Cypriot envoy to Venice and knight of the Order of White Crucifers

Dr. Hightown Crow
, alchemist, astrologer and anatomist to the duke

Iacopo
, Atilo’s servant and member of the Assassini

Amelia
, a Nubian slave and member of the Assassini

Roderigo
, Captain of the Dogana, penniless since he refuses to take bribes

“… what a hell of witchcraft lies

In the small orb of one particular tear…”

The boy hung naked from wooden walls, shackles circling one wrist and both ankles. He’d fought for days to release his left hand, burning his skin on red-hot fetters as he worked to drag his fingers free. The struggle had left him exhausted and—if he was honest—no better off than before.

But his life was theirs anyway; even here in an enclosed space where his lungs ached at every breath and the air was sour and becoming sourer. The gods had abandoned him to his death.

It would have helped if he could remember their names.

Some days he doubted they existed. If they did, he doubted they cared. The boy’s fury at his fate had become bitterness and despair, and then turned to false hope and fresh fury. Maybe he’d missed an emotion, but he’d worked his way through those he knew.

Yanking at his wrist made flesh sear.

Whatever magic his captors used was stronger than his will to be free. The chains with which they bound him were new, bolted
firmly to the wall. Every time he grabbed a chain to yank at it, his fingers sizzled as if a torturer pressed white-hot irons into his skin.

As if flattering the immortals could undo his earlier insults.

He’d shrieked at his gods, cursed them, called for the aid of demons. Begged for help from any human within earshot of his despair. A part of him wanted to return to shrieking. Simply for the release it would bring. Only he’d screamed his throat raw days ago. Besides, who would come to his grotesque little cell with no doors? And if they did, how would they enter?

What else merited being walled up alive?

His crime was a mystery. What was the point of punishment if the prisoner couldn’t remember what he’d done? The boy had no memory of his name. No memory of why he was locked in a space little bigger than a coffin. Not even a memory of who put him here.

Earth strewed the floor, splattered with his own soiling.

It was days since he’d needed to piss, and his lips were cracked like dry mud and raw from where he tried to lick them. He needed sleep almost as desperately as he wanted to be free, but every time he slumped his shackles burnt and the pain snapped him awake again. He’d done something wrong. Something very wrong. So wrong that even death wouldn’t embrace him.

If only he could remember what.

You have a name. What is it?

Like hope and freedom, this too remained out of reach. In the hours that followed, the boy hovered on the edges of a fever. Sometimes his wits were sharp, but mostly he inhabited a blasted wasteland inside his own skull where his memories should be.

All he saw in there were shadows that turned away from him; and voices he was unable to hear clearly.

Pay attention
, he told himself.
Listen.

So he did. What he heard were voices beyond the wooden walls. A crowd from the sound of it, arguing. And though what he heard was little louder than a whisper it told him they spoke a language he didn’t recognise. One voice snapped out an order, another protested. Then something slammed into the wall directly in front of him.

The second blow was even harder. Then came a third, his wooden world splintering as sweet air rushed in and fetid air blew out. The light through the narrow gap was blinding. As if the gods had come for him after all.

Almost four months before the boy woke to find himself trapped in an airless wooden prison, a young Venetian girl hurried along a ramshackle
fondamenta
on her city’s northern edge. In some places in that strange city the waterside walkways were built from brick or even stone. The one here was earth, above sharpened logs driven into the silt of the lagoon.

After sunset everywhere in Venice was unsafe, particularly if you were fifteen years old, unmarried and out of your area. But the red-haired girl on the
fondamenta
hoped to reach the brine pans before then. She planned to beg passage on a barge carrying salt to the mainland.

Her burgundy gown was already dusty and sweat stained.

Despite having walked for only an hour, she’d reached another world entirely. One where silk dresses attracted envious glances. Her oldest gown was still richer than the
campo gheto
’s best. Her hopes of passing freely ended when a small group of children stepped out of the shadows.

Opening her cloak, Lady Giulietta yanked free a gold locket from around her neck. “Take this,” she said. “Sell it. You can buy food.”

The boy with the knife sneered at her. “We steal food,” he said. “We don’t need your locket for that. Not from round here, are you?

Quiet Angel by Prescott Lane
A Flash of Green by John D. MacDonald
Hannah and the Highlander by Sabrina York
Diva's Last Curtain Call by Henry, Angela
Arianna & Finn (Royals of Valleria #3) by Knightly, Marianne
See How She Awakens by MIchelle Graves
The Fandom of the Operator by Robert Rankin
The Meeting Point by Austin Clarke
Huckleberry Hearts by Jennifer Beckstrand
Mi gran novela sobre La Vaguada by San Basilio, Fernando
Our partner