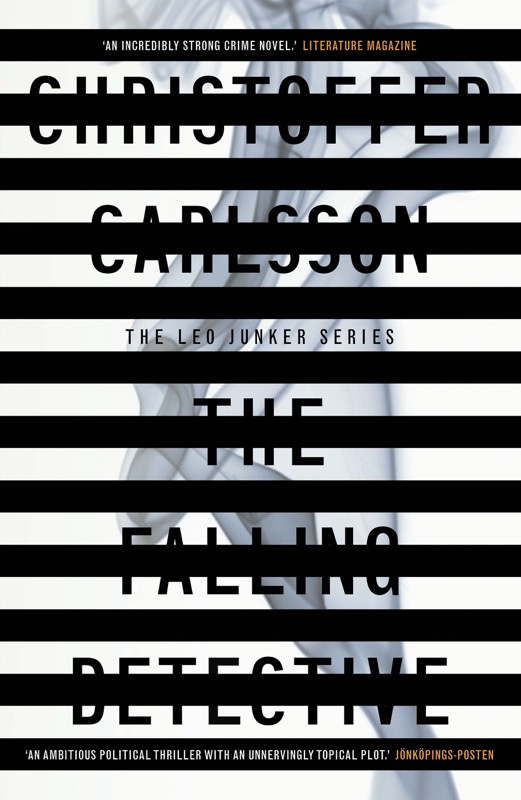 Christoffer Carlsson was born in 1986. The author of several previous novels, he has a PhD in criminology, and is a university lecturer in the subject.
The Falling Detective
is the sequel to
The Invisible Man from Salem
, and is the second volume in the Leo Junker series. 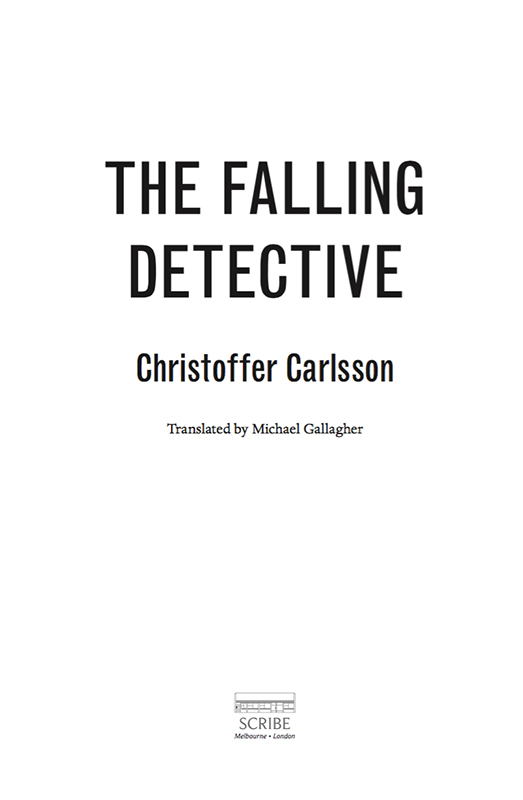 First published in English by Scribe 2016, by agreement with Pontas Literary & Film Agency

Willard
: They told me that you had gone totally insane, and that your methods were unsound.

Kurtz
: Are my methods unsound?

Willard
: I don't see any method at all, sir.

It was the winter of the raging storm.

A scientist died, a Dictaphone passed from one hand to another across Stockholm, and it caused trouble wherever it turned up. A demonstration spiralled out of control, and a pair who had once been friends met at the swings where they had played as children.

At the bottom of Lake MÃ¤laren lay a mobile phone, which had nothing to do with what happened, other than that it had been thrown into the water by the perpetrator. In a hospital bed, a man lay dying, and his last words were
sweetest sisters
and
Esther.
Whatever that meant. That wouldn't emerge until it was too late. And all the time the clock was ticking down towards the zero hour, the twenty-first of December.

It was a strange and complicated story, everyone agreed afterwards. But was it really that strange? Perhaps it was actually pretty straightforward, banal even, because that was also the winter when one man betrayed another, and that was probably the beginning of the end.

What happened, as far as we know, was something like this.

WHO COMES AROUND
ON A SPECIAL NIGHT?

Only one thing is certain: this town is scared. It has shown its true colours now, I'm sure of it. You can hear it in the city's pulse if you get close enough and dare to put your ear to it, if you really listen to it beating. It is tense and nervous, unpredictable â a light bulb that has started flickering, soon to be extinguished for good, but no one is paying attention. No one can see it.

Instead, a lone church bell rings. It's midnight, and the snow is falling gently and slowly. The cold streetlamps make the flakes glitter silver and become translucent. You can hear pulsating, heavy bass from a nearby club, and someone singing
Oh, I wish it could be Christmas every day,
and the screech of brakes a bit further away. The driver blasts his horn.

And in the distance: sirens. It's that kind of night.

One of the alleys off DÃ¶belnsgatan is narrow and cramped. If you stretch out your arms, you can almost touch the worn brickwork on both sides, it's that narrow. And dark. The facades in the centre of town are high, and it's been a long time since the sun reached the crumbling tarmac below.

The little alleyway opens out into a large courtyard. Plastic bins full of refuse line the walls. A thin layer of snow has settled on their lids. When you look up, you can see a patch of sky, framed by the walls of the buildings.

A woman in light-blue overalls is carefully unfurling a large, white awning over part of the courtyard. Under the canopy is a man lying on his back. He's wearing an unbuttoned, thick overcoat, a knitted scarf, dark-grey jeans, and black boots. Four bright, white floodlights illuminate the scene. At his side is a worn-out FjÃ¤llrÃ¤ven rucksack, open. Possessions spill from its mouth â a book, a card wallet, a pair of thick socks, a bunch of keys, some cash. He'd been wearing gloves, but had taken them off. They're sticking out from the pockets of his overcoat.

The man is between thirty and forty years old, dark-haired, and well groomed with a short hairstyle, a few days' stubble, and square facial features. His eyes are closed, so you can't tell what colour they are, and that might be just as well, for now.

I wait a little way away from the tent with my hands in my pockets, and stamp my feet; it might look as though I'm impatient, but in fact I'm just cold. High above, in one of the windows overlooking the courtyard, a red Christmas star glows brightly. It's the size of a car tyre, and behind it a face is just visible. A boy.

âHas he been there long?'

The woman in the blue overalls, Victoria Mauritzon, is crouched on the ground, about to open her bag. She turns around.

I want to keep my hands warm, so I leave them in my pockets, and nod towards the window.

She returns to the task at hand. She picks up a camera, adjusts the lens, and proceeds to take sixty-eight photographs of the deceased and the world around him.

Silent blue lights strike the walls of the building, and in the distance the blue-and-white incident-tape is flapping in the wind. Some passers-by have stopped and are carefully observing the scene, hoping to see something. Every now and then there is the flash of a mobile-phone camera.

Mauritzon has put the camera back in its bag and carefully inserted a digital thermometer into his ear.

âIt's quite fresh,' she says.

âAn hour, maybe not even that. I'm less confident than I would normally be. This method just gives a very rough indication, but I haven't got the other one with me.'

âNo idea.' She removes the thermometer, and makes a note of the reading on the form. âBut dead he most certainly is.'

I enter the tent carefully and crouch down next to the rucksack. Mauritzon hands me a pair of latex gloves, and, reluctantly, I take my hands out of my pockets. The gloves make my skin paler; make my fingers look even bonier than they really are.

Warmth spreads along my spine. Nausea is building inside me, and then cold sweats. I hope Mauritzon doesn't notice.

âHe looks smart,' she says, glancing at the body. âNot exactly the kind of person you'd expect to find in a yard.'

âMaybe he was meeting someone.'

I pick up the wallet. It's small, black, and made of leather. Various cards stick out from the little compartments: a credit card, an ID-card, some sort of key card, and a white one, with a curly blue motif and
UNIVERSITY OF STOCKHOLM
written in the same blue. I pull out the ID-card, and swallow twice to control the nausea.

âThomas Markus Heber.' I compare the picture with his face. âIt looks like him. Born 1978.'

I make a note of his national ID Number, and I have the strange feeling that I have stolen something from the deceased. Then I put the card back in the wallet and turn to the other items that have spilled out of the rucksack. The bunch of keys reveals nothing more than the fact that the victim didn't own a car. There are three keys: one to his home, one that isn't immediately identifiable but in all probability is to his workplace, and a bicycle key. The thick socks are dry, but have been worn; the smell is like putting your nose in a shoe.

The book is
The Chalk Circle Man,
by Fred Vargas. The dust jacket is a little bit worn, and halfway through the book one of the pages is dog-eared. I open it at that page, and my eyes focus on the sentence at the top.

Can't think of anything to think.

I wonder about the meaning of the sentence before closing the book, putting it back and standing up. It's my twelfth day back on duty; the second on nights.

The question is what the fuck I am doing here.

The Violent Crime Unit responsible for the city centre and Norrmalm gets called the Snakepit by other police. Intoxicated people hitting, kicking, stabbing, and shooting each other; junkies and pushers getting found in cellars with holes in their necks; women beating men to death, and men beating women to death; consignments of drugs and weapons changing hands; riots, demos, wild chases, and torched cars. That's the Snakepit. But now this: a well-dressed middle-aged man dies in a backyard. No one is safe.

Officially, I was out in the cold until the New Year. Before then, active duty was unthinkable, mainly because of what had happened at the end of the summer. It might have been a conversation with the psychologist that changed all that.

My psychologist is the sort who values his clients in monetary terms, and I had long since ceased to be a lucrative investment. The hour-long sessions consisted of me alternating between floods of tears and sitting in despondent silence, smoking cigarettes, despite that not being allowed. The psychologist, for the most part, looked bored, admired his own tanned face in the mirror behind my back, and ran his fingers through his neatly combed hair.

âHow are you getting on with the Serax?' he asked.

His eyes lit up.

âGood, Leo.' He wrote something on his piece of paper. âGood, that is good. A huge step forward.'

Not long afterwards, the psychologist declared that I no longer needed his help. I went through a ludicrously simple check-up a few days later, and the person examining me saw no reason why I shouldn't return to serving the law.

That might have been because I didn't say anything about the nightmares, nor did I mention the sporadic hallucinations. Nothing about the occasional strange impulse to hurl a glass at the wall, smash up a chair, punch someone in the face. For some reason, nobody asked, and even if they had, I wouldn't have told the truth. If there's one thing I've learnt, it's that in the police, it isn't that hard to lie your way out of trouble.

Internal Affairs was out of the question, bearing in mind what had happened, but I should have at least been allowed to start with some desk job somewhere, maybe on the burglary or sex-crime unit. Somewhere in the deepest recesses of the bureaucracy, where I couldn't really do any harm.

I was doomed to the Snakepit again, where I'd once been trained by Levin. The National Police Authority has been throwing money at the area, and that might be why I'm here. Those extra resources, as far as we can tell, don't help much. The drone of the big city makes people mad, they say, and maddest of all are those at the source of the drone, the heart of the city. Anyone who has ever earned their crust in the Snakepit can tell you that.

The Bubble Gum Thief by Jeff Miller
California Demon by Julie Kenner
Angel by Dani Wyatt
Torn Between Two Brothers by Cathryn Fox
The Virtuoso by Grace Burrowes
Traitor by Julia Sykes
Casca 10: The Conquistador by Barry Sadler
The Reluctant Knight by Amelia Price
Adventures in the Orgasmatron by Christopher Turner
Key Witness by J. F. Freedman
Our partner