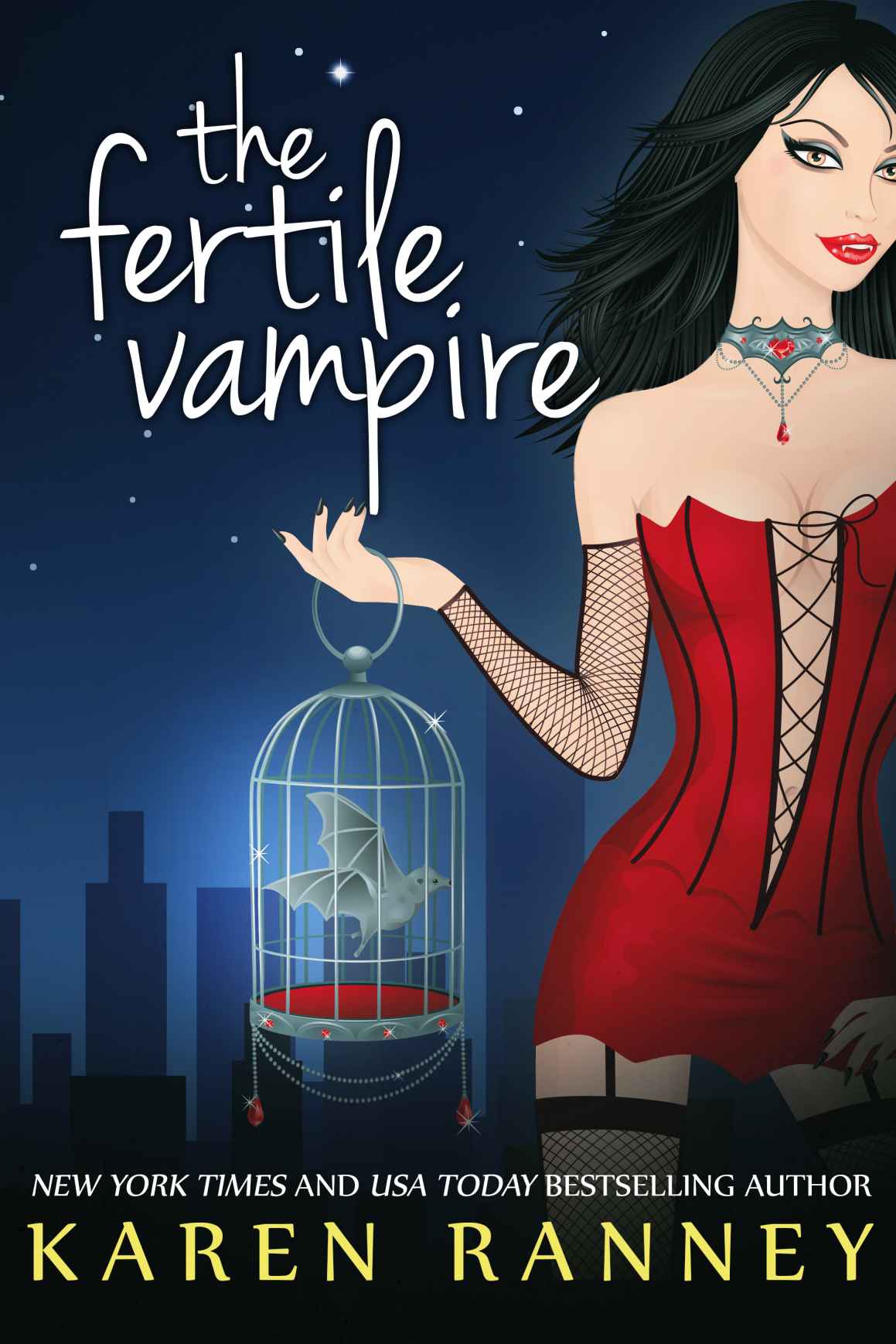 Other Books by Karen Ranney

The Virgin of Clan Sinclair

The Witch of Clan Sinclair

The Devil of Clan Sinclair

Sold to a Laird

A Scotsman in Love

Till Next We Meet

Upon a Wicked Time

A Promise of Love

The Eyes of Love

This book is protected under the US Copyright Act of 1976 and all other applicable international, federal, state and local laws, and all rights are reserved.

This is a work of fiction. Names, characters, places, and incidents either are the product of the author’s imagination or are used fictitiously, and any resemblance to any persons, living or dead, business establishments, events, or locales is entirely coincidental.

Any trademarks, service marks, product names, or named features are assumed to be the property of their respective owners, and are used only for reference. There is no implied endorsement.

Back from the dead

Yes, there are such things as vampires.

Although the word vampire isn't exactly PC. It’s a little like calling an illegal alien a
wetback
. Very frowned on nowadays. A dozen names exist for vampires: life impaired, blood drinkers, children of the eternal night – all depending how you feel about them.

Me? I've always called them vampires.

You can imagine what I thought, then, when I woke up in the brand new Vampire Resuscitation Center.

Of course I didn’t know where I was at the time.

The roof of my mouth was coated with fur, my tongue thick as if I'd been given a double dose of Novocain. I lay there blinking up at the ceiling, the patterned tiles making me dizzy. I closed my eyes, opened them again a minute later, trying to focus on something to keep the room from swimming.

The smell of alcohol – the type you rub, not the type you drink – made me turn my head. There on a table was a metal tray filled with glass jars of instruments all of them soaking in what I surmised was alcohol.

Wherever I was they believed in antisepsis.

See, doesn't that prove I still functioned? I actually remembered my Lister from school.

The instruments, however, didn't give me a reassuring feeling. They reminded me of the same types of torture devices my dentist used when performing a gingivectomy. Lousy teeth run in the family plus I'd been a bad dental patient and hadn't flossed as much as I should.

Was I at the dentist?

I closed my eyes, trying to remember what happened.

Marcie Marie Montgomery – an awful name, but it was mine. I knew it. I remembered it. Good, one memory down, the rest of my life to go.

I smelled cloves, but it wasn't in the room as much as my memory.

Doug had come by last night in an attempt to reconcile. I hadn't let him in, but that didn't matter. The old adage about having to invite a vampire into your house didn’t apply if you’d invited him into your body. Wherever you were was invitation enough.

I wish someone had told me earlier.

He remained at the door, softly speaking to me. When I finally relented he pushed open the door easily and approached me, stalking me almost like a predator. I didn't actually enjoy feeling like prey and when I told him he only laughed.

"No one has ever turned me away, gumdrop."

"Perhaps it's better for your ego if they do," I said, taking a step backward, away from him.

I headed for the kitchen, to open the sliding glass door to the tiny garden. My townhouse had been small, cozy and homey from the beginning. Now it was filled with overheated vampire.

Maybe if he got some fresh air it would cool him off.

In a flash he had me up against the glass, his hands on either side of me. His body pressed against mine, reminding me he knew my body well. His mouth trailed a path from my ear and down my neck. He smelled delicious, like warm caramel and cloves.

Any thoughts of Doug’s smell vanished when he opened my collar so he could nibble there.

"What, you've run out of other willing girls?" I asked breathlessly.

"There's only you, Marcie," he murmured against my throat.

"I'm the flavor of the month. Maybe I'm vanilla and the others are chocolate."

I pulled away, straightened my blouse, and prayed for composure. Perhaps he thought I didn't have the same reaction to him as I always had. I did, of course, but my pride tried to do its job.

Instead, he grinned at me, grabbed my hand, pulled me up the stairs and into my bedroom. It wouldn't be fair to call it coercion. If he tricked me with some secret vampire power it was the first time. Doug was a hottie, skilled in the sex department, and well endowed.

His lovemaking was the most exquisite experience I've ever known. Not something you'd label with a four letter word. Transcendent, maybe – yeah, a good word for it.

When it was over, my body shivering, shattering and shuddering, he bit me hard on the side of my left breast, almost in my armpit. Close to my heart and therefore even more deadly.

The pain from the bite’s the last thing I remember.

"There you are, finally awake."

I opened my eyes to find a woman dressed in a balloon decorated smock. Had she come from the pediatric ward?

Her blond hair was as bright as the fluorescent lights above me, her blue eyes a Bahamian shade of turquoise. Her smile was blinding – a yard wide with teeth almost supernaturally white.

Grandma, what big teeth you have.

"Why am I in the hospital?" I asked, closing my eyes.

The Vampiric Resuscitation Center, for those of you who don't watch cable news.

I opened my eyes and stared at her. “Am I a vampire?”

She didn’t answer, only smiled again.

Thank you, Doug. Being turned into a vampire was a pretty high price to pay for great sex, wasn't it?

All’s fair in blood and war

"Up you go," the nurse said, reaching behind me and sliding the pillow out from beneath my head. “You need to sit up.”

I didn’t want to sit up. I wanted to close my eyes and go back to being unconscious.

I closed my eyes and tried.

She moved her arm and the back of my head hit the mattress. I opened my eyes and glared up at her.

The idea of ingesting anything was nauseating.

She must've known how I felt from my expression because her smile increased in wattage.

My nurse must be a sadist.

“How about a little water?”

I could manage a sip or two of water.

She placed the blue plastic pitcher filled with ice water and the plastic cup on the patient table, moving it closer.

Another blinding smile and she vanished, her shoes squeaking on the vinyl floor.

She hadn't poured the water for me and had put the pillow on the end of the bed. The minute I reached for it my nausea subsided and so did the pounding on the back of my skull.

Gingerly, I sat up. I wasn't ready to go out and dance, but I didn’t feel so sick, either. I grabbed the pillow, dropped it behind me, then held the cup with my left hand while I poured with the right.

I surveyed my surroundings. Mine was the only bed in the room. A half open door revealed a bathroom. Blinds covered the far wall.

The water made me feel a little dizzy or maybe it was sitting up. A few minutes later I fell back on the pillow.

"I drank the water," I said when the nurse appeared a few minutes later. "What did you put in it?"

"I don't know what you mean," she said, eyes wide and innocent. "There's nothing in the water." For a few moments she managed to hold my gaze before looking away.

“For how long?” I wanted to say I didn’t feel like resting anymore, but I was surprisingly tired.

"How did I get here? After the dirty deed did Doug drop me off? Curbside service?"

I eyed her for a moment wondering if nurses were given to a certain kind of conversational style called: Let's Play Obvious. Would I have asked if I knew? Or perhaps she thought I was testing her knowledge of me.

I ended up mutely shaking my head.

"You were admitted anonymously.”

In other words Doug had probably rolled me out of the car and beat it.

She bustled around my bed, straightening the sheets and placing the call button on the pillow. I hadn’t used it yet since I’d barely been conscious. What would happen if I did? Would anyone answer? I felt a little more secure with the door closed than I did with Little Miss Sunshine here.

I closed my eyes again. "I'm very tired," I said, hoping she got the hint. “I think I will sleep a little more.”

I tried to think of anything but about where – and what – I was, a respite lasting about five seconds. My mind was determined to circle around to the truth.

When I was thirteen I met my first real life vampire. His name was Paul and he was my stepfather. We only talked about him being a vampire once. He and my mother had been having what I’ll euphemistically call having “a good time”. When he'd emerged from the bedroom, heading for the kitchen, his lips had been bloody. No doubt he'd taken a snack from my mother in the act of coitus. Yes, another euphemism. It's my mother.

Paperboy by Christopher Fowler
Les Blancs by Lorraine Hansberry
The Space Between by Kate Canterbary
Hitched (Imperfect Love Book 1) by Kendall Ryan
Race by Bethany Walkers
I Owe You One by Natalie Hyde
Blood Brothers in Louisbourg by Philip Roy
Submitting To The White Billionaire (BWWM Interracial Romance) by Skye, Lena
Spice & Wolf IV by Hasekura Isuna
Shadowed 3 I’ll Be Damned by Kate Hill
Our partner