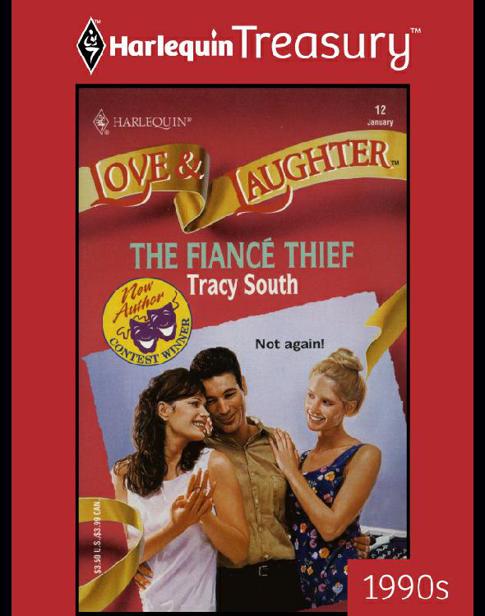 Alec Mason could smell a story.

And whatever the story was, it was due to Claire. And the invitation Claire had received to spend the weekend with Miranda Craig. The hometown star who refused to talk to the local paper.

“Have you read Miranda Craig’s autobiography?” Lissa asked. “Our Claire is in it”

“Claire?” When Alec turned to her, she had taken her glasses off and was shaking her chestnut hair loose from its ponytail. For a split second Claire seemed like someone who could hold her own with the hottest female star on the planet Then she put her glasses back on, pushed her hair back behind her ears and slumped her shoulders again. “Missy Craig was my best friend,” Claire said.

“Do you know how much getting that interview would mean for this paper?” Alec insisted.

Lissa interrupted. “What Claire is trying to tell you, Alec, is that
she
isn’t speaking to Miranda. Miranda stole Claire’s fiance.”

“You had a fiancé?” Alec sputtered.

“Claire had a few fiancés,” Lissa added. “Miranda stole them all.”

Alec absorbed the shock of the words. “We’re going after this story.”

“Miranda is not going to spill her secrets to some reporter I drag along,” Claire insisted.

Alec smiled triumphantly. “But I won’t be there as a reporter. I’ll be your fiancé.”

A new year always brings lots of new friends and new opportunities into our lives. At LOVE & LAUGHTER we are especially proud of the number of new writers we have discovered. One of the greatest joys an editor can have is making “the call”—telling a hopeful, unpublished author, “We love your book and want to buy it.”

Tracy South is one of those new voices. She is also the winner of the LOVE & LAUGHTER contest Her book is a real delight, both witty and romantic. Other new voices in the months ahead include Stephanie Bond, Bonnie Tucker, Trish Jensen and Colleen Collins. I’m sure you’ll enjoy their stories as much as we did and look for books by these fresh, new funny ladies.

Prolific and always popular Jacqueline Diamond delivers a knockout punch in the hilarious
Punchline.
This story about rival editors from competing magazines, who just
despise
each other yet keep ending up together, is terrific. A classic battle of the sexes, set in the 1990s.

I hope the New Year brings you much love and laughter.

When Harlequin announced its Love & Laughter contest for unpublished authors, it seemed like an omen that Carole Lombard’s name was mentioned in the write-up. Not only am I a total fanatic about her films, I actually owe the idea of
The Fiancé Thief
to one of her roles. While watching
Twentieth Century,
I was struck by how much a college friend resembled her. I hadn’t talked to this friend since she moved to New York to become an actress. What if she became famous one day? Well, I’d be happy for her. No plot there. But what if she were someone I didn’t like? How would I feel then?

Comic novelist P. G. Wodehouse said someone told him, “Get the love story straight and the comedy will fall into place.” I hope you’ll find I’ve gotten it right on both counts. Enjoy!

To my daughter, Dylan

A
LEC
M
ASON COULD SMELL
a story. He wouldn’t have claimed to have anything as sissy as intuition or as goofy as ESP. He wouldn’t even admit to having a nose for news, because he was a precise man, one who despised clichés. But there was no denying that right here, right now, he was being teased by the scent of some breaking event. And whatever the story was, it was unfolding here in his office.

He leaned against the door and surveyed his trio of reporters. Granted, they didn’t look any more inspired than usual. Hank was bent over his keyboard, his usual calm expression on his face. Lissa was making faces at her computer, and Alec watched her as she typed a word, then rested her head on the desk. Every sentence was sheer torture for Lissa. Although Alec didn’t share her agony, he did admire her gift for melodrama.

He shifted his gaze to Claire, seated at her cluttered desk about five feet away from Hank and Lissa. No melodrama here. Claire Morgan was always achingly earnest and deathly serious. He watched her as her hands flew across the keyboard, her face screwed up in an unholy frown at the screen. Her hair was pulled back into a messy ponytail, and her glasses slipped down a little on her face as she typed.

How such a drab girl could turn in such sparkling copy was a mystery to him. He had hired her, sight unseen, on the basis of clips she’d sent to him. It was one of the few times his instincts had led him astray. He had been so
knocked out by her writing, and he’d been so afraid that the town’s other, bigger paper would snap her up that he had called her with a job offer the second he’d finished reading her clips. From her confident purr on the phone, and the brassy edge to her words on the page, he’d pictured a vivacious, hard-hitting, seasoned journalist. Instead, he was stuck with a stammering mouse.

So far he had her limited to life-style stories, although that wasn’t what he’d planned when he hired her. Even Claire could get quotes from the chatty women at the Ladies’ Gardening Club. And good quotes they were, he had to admit. But there was no way he was going to send her out after real news. He could just picture it: “Excuse me, Mr. Mayor, sir, I hate to bother you, and I don’t mean to hurt your feelings, but…” The other paper, the city’s daily, would have the story and its follow-up headed for the recycling bin before she ever got through her apologies.

Hank and Lissa were still oblivious to his presence, but Claire seemed to sense his stare. When she turned and saw him by the door, she started a little and let out a nearly inaudible yelp. Blushing, she turned back to the computer, but the commotion made the two other reporters look up.

“Did I forget to shave today, Claire?” His voice boomed and echoed in the quiet room. “My looks don’t usually terrify women and children.”

She didn’t look at him. “Sorry,” she said in a small voice. “I didn’t see you standing there.”

“I was trying to see how many words you could write before you fainted dead away,” he told her. “I see you haven’t reached your limit.”

“The day’s young,” Lissa told him. “And I’m only seventy-five words into my story.”

Hank looked up from his computer. “We’ll have an ambulance here yet.”

Claire was ignoring the others’ banter, typing furiously again. “What are you working on, Claire?”

Damned if she didn’t turn bright red again. He’d dealt with some coy women in his day, but never had he met one who turned into a nervous heap every time he glanced at her. It was beginning to get on his nerves.

Not giving her a chance to answer, he went on. “You know, when I walked in here just a few minutes ago, I had the feeling that something had happened here today. Could that have something to do with what you’re working on, Claire?”

“No, it doesn’t.” She sounded honest enough when she said it, but her glance darted almost imperceptibly to one corner of her desk. Alec saw that Hank and Lissa also looked toward that same corner. In a flash, he was there, and he immediately zeroed in on the newest addition to Claire’s massive pile of junk. There, sticking out from under a stack of film guides, surrounded by disposable containers from yesterday’s lunch, sat a registered letter. He had just one twinge of conscience before his newsman’s hunger got to him.

He picked it up. “Tell me this is nothing I should be interested in, and I’ll believe you,” he told Claire, who jumped up from her seat and grabbed at the letter.

“You can’t read that,” she said, plainly evading the issue of whether or not he’d be interested in the letter’s contents. Just as he’d suspected, Claire was a lousy liar. Another reason why she’d never make a good reporter.

He held the letter aloft. “Tell me I wouldn’t be interested,” he repeated.

Claire’s eyes were bright and angry behind her glasses, and her hair was slipping out of its impromptu ponytail. She put her hands on her hips, and when she did so, Alec was surprised to notice the swell of her chest and the outline of her tiny waist, attributes that had been hidden by her baggy cotton dress. A rosy color had sneaked into her
cheeks, and he took a second to notice the way it highlighted her creamy pale skin.

What was he thinking? This was the oldest diversion in the book. It would take more accomplished feminine wiles than Claire Morgan’s to make that trick work.

“It’s a federal offense to read someone else’s mail,” she said.

Alec looked at Hank, who packed in his brain every arcane fact worth knowing, as well as a wealth of those that weren’t. Hank shook his head.

“It’s only an offense to interfere with its delivery,” he said. As Alec started to slip the letter out of its envelope, Hank continued. “However, what Lissa did, pretending to be Claire and signing for the letter, might actually fall into that category.”

Alec stopped the letter halfway out, and turned to Lissa. She shrugged, and her contact-blue eyes widened. “I don’t know how on earth I heard the man say Lissa Barnard.’ I was halfway through the letter before I realized it surely wasn’t meant for me. And then, since I was just getting to the interesting part…” Her voice trailed off, and she smiled apologetically.

Alec slid the letter all the way back into the envelope, and handed it back to Claire. He put a comforting hand on her shoulder and took a slightly malicious delight in her resulting tremble. “For you, Claire, to think for a moment that I would ever read mail addressed to you. For you to even consider that I would use and abuse my employees in that way. It’s an arrow to the heart, that’s what it is.”

He took his hand off her shoulder and looked at Lissa. “Well?” he asked.

Claire said, “Lissa, you can’t,” just as Lissa said, less sincerely, “Oh, Alec, I can’t.” He raised his eyebrows at Lissa. It took her all of three seconds to crack.

My Former Self by C. T. Musca
Assassins at Ospreys by R. T. Raichev
Showdown by Edward Gorman / Ed Gorman
In His Grip: His #5 (A Billionaire Domination Serial) by Erika Masten
A Soul For Chaos (The Soulbearer Trilogy) by McHugh, Crista
Blue Lily, Lily Blue by Maggie Stiefvater
The Walkers from the Crypt by Unknown
The Avenger 2 - The Yellow Hoard by Kenneth Robeson
Shadows at Predator Reef by Franklin W. Dixon
Her Russian Brute: 50 Loving States, Idaho by Taylor, Theodora
Our partner