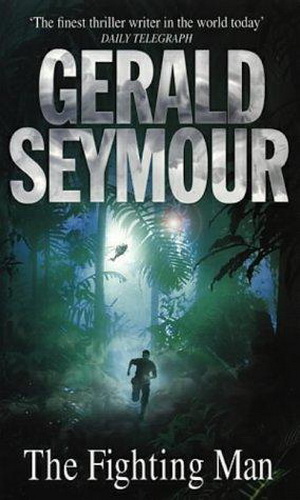 A former SAS soldier sickened by the West’s treatment of the Kurds after the Gulf War, Gord Brown has found new purpose helping the Guatemalan resistance against a brutal military dictatorship. As Gord’s ragged army marches through the jungle and across the high mountains towards Guatemala City, a hopeless dream looks to become a burning reality. But the forces pitted against them are formidable, and the Guatemalan government also have a Gulf War veteran on their side, a man whom Gord has met before . . .

First published in Great Britain in 1993 by HarperCollins Publishers

This digital edition first published in 2013 by Hodder & Stoughton

Work has been asserted by him in accordance with

To Gillian, Nicholas and James

There are a good many things about the hero of this volume that may at first strike the average reader as improbable. And I am not referring to the odd coincidence of his sharing a name with someone who became prime minister after Gerald Seymour wrote it!

No, the issues surrounding this Gordon Brown are more to do with why on earth would someone who had been an SAS officer really engage in such a dangerous, hopeless mission, without pay and with every chance of ending up in an unmarked grave? Aren’t the people in Britain’s Special Forces supposed to be brighter than that, more stable?

Well, I have never served in the SAS or SBS (its Royal Marine sister unit) but I do know quite a few people who have. These men have poured out a lot of anecdotes to me over the years, helping me to write a couple of factual books about these normally secretive units. Let me give you a few details of real men that might offer some insight into the fictional Gord Brown.

Soldier A, driven by the pursuit of excellence to the point where he felt even the SAS could not satisfy his standards, resigned and disappeared. Contemplating suicide, he was eventually found and helped after a police search.

Soldier B, like Gerald’s hero, served in Iraq during the 1991 Gulf War, where he fell foul of the hierarchy, being ‘RTU’ed’ or Returned to Unit. The SAS is full is highly competitive alpha males – and a posting there often ends unhappily, with recriminations.

My last real-life case, Soldier C, had left the forces and was working with me and a BBC team covering a revolution. Several times he confided in me his sympathy for the rebels, his conviction that they needed better training and leadership, as well as the fact that he would consider coming back, on his own, to help them once our assignment was over.

Scanning the news archives, you will find a number of examples of former British Special Forces soldiers who turned up in odd places, helping mount coups or train resistance fighters. Many had hired themselves out as mercenaries, some had ideological reasons. However it is fair to say that what unites characters like these is a relish for action and adventure, ‘the refusal’, in the words of one SAS friend, ‘to respect boundaries’.

As Gerald transports his hero into action, he highlights this essential truth, writing, ‘he would have admitted it, couldn’t have hidden it, the excitement consumed him’. Gord Brown was dealing with a surge of excitement that had welled up, ‘as it always did whenever he flew forward to combat’.

Passing the selection tests for the Special Forces requires enormous drive, stamina and focus – so much so that you can argue that most of those who get through are not ‘balanced’ people to start with. The experience of soldiering in this rarified and dangerous atmosphere leaves some of them addicted to risk.

Add these factors together and you understand some of the reasons why many of these men meet untimely deaths. There are those who have perished doing extreme sports, others in obscure foreign conflicts, and some who cannot deal with their inner demons anymore end up taking their own lives.

They are often solitary characters too – leaving a trail of broken marriages, estranged friendships and lost jobs in their trail. Many find that life after Hereford or Poole is a series of disappointments. This isn’t a destiny that unites all of these onetime warriors, of course, many of whom go on to live fulfilling lives, but it does seem to consume a surprising number of them.

These were the sorts of characters that Gerald and I discussed when he was writing THE FIGHTING MAN. Gerald is the sort of writer who insists on authenticity, whether that concerns the flight performance of the Antonov An-2 biplane or the feel of Guatemala City’s shanties.

The result is a compelling thriller and an excellently plotted page-turner. But it is also a vivid study of a fighting man, one of those who ran out of road with the SAS, and hazarded his life on an apparently hopeless mission in a far-off land.

He saw the cockroach scurry across the tiled floor, and ignored it.

His father saw the cockroach and swiped at it with his stick and cursed because the creature had found the cover of a chair.

He sat at the table and turned the pages of the morning’s newspaper. He heard his father’s hacked cough and then the shuffle of the shoes on the tiles and the beat of the stick that supported him. The cockroach had reached the angle of the tiled floor and the walls and headed for the safety of the divan bed. The bed was not made yet, and the floor was not washed down, and the walls of the room were scarred with damp and the paint had flaked. It was a room that no woman cared for, home for a father and his son. Behind his shoulder there was a grunt from his father and then the closing of the inner door and then the slamming of the heavier outer door. At the same time each morning his father grunted and went out through the doors and there would be the awkward footfall of the injured leg down the staircase that led to the street.

He rolled the newspaper tight enough to make it a weapon. He went catlike across the room. He never spoke of the cockroaches in the room to his father. With a sudden movement, he pulled the divan bed away from the wall. It was as if he believed that to have spoken of the cockroaches would have seemed to be a criticism of his father. They floundered, their security taken from them. He would never criticize his father, not after the life that he had lived, not after the suffering he had endured. He beat the cockroaches with the rolled newspaper until they were pulped and smeared on the tiles. Their home was a two-bedroomed apartment in the Campeche quarter at the south end of the Old City, with a kitchenette annexe behind a curtain off the day room where he slept, and a shower and lavatory on the landing beyond the outer door. He pushed the bed back against the wall; the ant columns would dispose of the broken cockroaches.

He unrolled the newspaper, threw it back on the table so that it hid the used cups and the dirtied plates. There were bloodstains across the speech of the minister that celebrated the harvest of cut sugar cane.

He went to the window.

They were waiting for his father at the café. They were the other old men, the exiles. They sat where they always sat in the mid-morning to await the arrival of his father. They were at two tables pushed together and in the centre was an empty plastic chair that was ready for him. He saw the fat stomachs and the muscleless arms and the bald heads that were discoloured by the sun. They would be counting through their money so that each had enough for two cups of thin coffee and a packet of cigarettes. They were the dreamers.

His father would have stopped and talked in the ground-floor hallway with Marta, nearly blind and a little deaf, who guarded the staircase with fierce devotion, and who pinned each morning to the chest of her black dress the medal she had been given as recompense for her husband’s death in the revolution. He wrinkled his nostrils at the stench of the gasoline fumes. The street outside their apartment now carried all the traffic from the wider parallel route that was closed to permit the slow rebuilding of a sewer. He saw his father come onto the pavement and wave his stick as a farewell behind him. The noise of the street flooded through the open window. It was that morning of the week when he collected up their shirts and vests and underpants and socks and washed them, scrubbing clean the threadbare cotton.

His father was about to negotiate a crossing of the street. They were standing for him, the men around the tables of the coffee house, because he was their leader. He smiled, as he smiled each morning when he saw them stand as straight as their backs would allow to greet his father. Old men’s dreams. He turned away. The washing was in a basket beside the chest in which the two Makarov pistols were locked, along with his father’s camouflage uniform and the boots that still carried the long-ago-gathered mud. He heard the screaming of the traffic horn.

He was drawn to the window. He stumbled the last three strides. He stared down into the street.