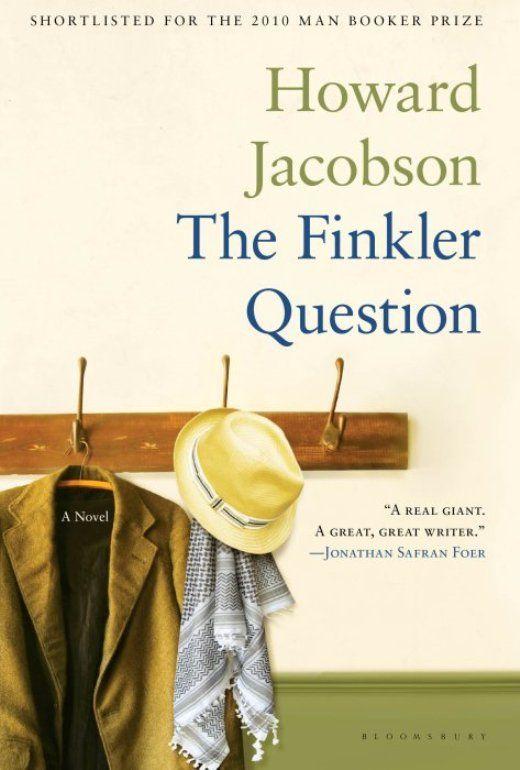 To the memory of three dear friends, great givers of laughter

Who now will set the table on a roar?

Praise for
The Finkler Question

He should have seen it coming.

His life had been one mishap after another. So he should have been prepared for this one.

He was a man who saw things coming. Not shadowy premon-itions before and after sleep, but real and present dangers in the daylit world. Lamp posts and trees reared up at him, splintering his shins. Speeding cars lost control and rode on to the footpath leaving him lying in a pile of torn tissue and mangled bones. Sharp objects dropped from scaffolding and pierced his skull.

Women worst of all. When a woman of the sort Julian Treslove found beautiful crossed his path it wasn't his body that took the force but his mind. She shattered his calm.

True, he had no calm, but she shattered whatever calm there was to look forward to in the future. She
was
the future.

People who see what's coming have faulty chronology, that is all. Treslove's clocks were all wrong. He no sooner saw the woman than he saw the aftermath of her - his marriage proposal and her acceptance, the home they would set up together, the drawn rich silk curtains leaking purple light, the bed sheets billowing like clouds, the wisp of aromatic smoke winding from the chimney - only for every wrack of it - its lattice of crimson roof tiles, its gables and dormer windows, his happiness, his future - to come crashing down on him in the moment of her walking past.

She didn't leave him for another man, or tell him she was sick of him and of their life together, she passed away in a perfected dream of tragic love - consumptive, wet-eyelashed, and as often as not singing her goodbyes to him in phrases borrowed from popular Italian opera.

There was no child. Children spoilt the story.

Between the rearing lamp posts and the falling masonry he would sometimes catch himself rehearsing his last words to her - also as often as not borrowed from the popular Italian operas - as though time had concertinaed, his heart had smashed, and she was dying even before he had met her.

There was something exquisite to Treslove in the presentiment of a woman he loved expiring in his arms. On occasions he died in hers, but her dying in his was better. It was how he knew he was in love: no presentiment of her expiry, no proposal.

That was the poetry of his life. In reality it had all been women accusing him of stifling their creativity and walking out on him.

In reality there had even been children.

But beyond the reality something beckoned.

On a school holiday in Barcelona he paid a gypsy fortune-teller to read his hand.

Treslove was excited. 'Is she beautiful?'

Treslove was more excited still. 'How will I know when I have met her?'

'As a rule, names are extra,' the gypsy said, bending back his thumb. 'But I will make an exception for you because you are young. I see a Juno - do you know a Juno?'

She pronounced it 'Huno'. But only when she remembered.

Treslove closed one eye. Juno? Did he know a Juno? Did
anyone
know a Juno? No, sorry, no, he didn't. But he knew a June.

Treslove shook his head. But he liked the sound of it - Julian and Judith. Hulian and Hudith Treslove.

'How long will she wait?' he asked.

'As long as it takes you to find her.'

Treslove imagined himself looking, searching the seven seas. 'You said you see danger. How is she dangerous?'

He saw her rearing up at him, with a knife to his throat -
Addio, mio bello, addio
.

'So should I avoid her?' Treslove asked.

She shuddered a fortune-teller's shudder. 'You cannot avoid her.'

She was beautiful herself. At least in Treslove's eyes. Emaciated and tragic with gold hooped earrings and a trace, he thought, of a West Midlands accent. But for the accent he would have been in love with her.

She didn't tell him anything he didn't already know. Someone, something, was in store for him.

Something of more moment than a mishap.

He was framed for calamity and sadness but was always somewhere else when either struck. Once, a tree fell and crushed a person walking just a half a yard behind him. Treslove heard the cry and wondered whether it was his own. He missed a berserk gunman on the London Underground by the length of a single carriage. He wasn't even interviewed by the police. And a girl he had loved with a schoolboy's hopeless longing - the daughter of one of his father's friends, an angel with skin as fine as late-summer rose petals and eyes that seemed forever wet - died of leukaemia in her fourteenth year while Treslove was in Barcelona having his fortune told. His family did not call him back for her final hours or even for the funeral. They did not want to spoil his holiday, they told him, but the truth was they did not trust his fortitude. People who knew Treslove thought twice about inviting him to a deathbed or a burial.

So life was still all his to lose. He was, at forty-nine, in good physical shape, had not suffered a bruise since falling against his mother's knee in infancy, and was yet to be made a widower. To his know-ledge, not a woman he had loved or known sexually had died, few having stayed long enough with him anyway for their dying to make a moving finale to anything that could be called a grand affair. It gave him a preternaturally youthful look - this unconsummated expectation of tragic event. The look which people born again into their faith sometimes acquire.

It was a warm late-summer's evening, the moon high and skittish. Treslove was returning from a melancholy dinner with a couple of old friends, one his own age, one much older, both recently made widowers. For all the hazards of the streets, he had decided to walk a little around a part of London he knew well, mulling over the sadness of the night in retrospect, before taking a cab home.

A cab, not a Tube, though he lived only a hundred yards from a Tube station. A man as fearful as Treslove of what might befall him above ground was hardly going to venture beneath it. Not after the close shave with the gunman.

'How unutterably sad,' he said, not quite aloud. He meant the death of his friends' wives and the death of women generally. But he was also thinking of the men who had been left alone, himself included. It is terrible to lose a woman you have loved, but it is no less a loss to have no woman to take into your arms and cradle before tragedy strikes . . .

'Without that, what am I for?' he asked himself, for he was a man who did not function well on his own.

He passed the BBC, an institution for which he had once worked and cherished idealistic hopes but which he now hated to an irrational degree. Had it been rational he would have taken steps not to pass the building as often as he did. Under his breath he cursed it feebly - 'Shitheap,' he said.

That was exactly what he hated about the BBC: it had infantilised him. 'Auntie', the nation called the Corporation, fondly. But aunties are equivocal figures of affection, wicked and unreliable, pretending love only so long as they are short of love themselves, and then off. The BBC, Treslove believed, made addicts of those who listened to it, reducing them to a state of inane dependence. As it did those it employed. Only worse in the case of those it employed - handcuffing them in promotions and conceit, disabling them from any other life. Treslove himself a case in point. Though not promoted, only disabled.

There were cranes up around the building, as high and unsteady as the moon. That would be a shapely fate, he thought: as in my beginning, so in my end - a BBC crane dashing my brains out. The
shitheap.
He could hear the tearing of his skull, like the earth's skin opening in a disaster movie. But then life was a disaster movie in which lovely women died, one after another. He quickened his pace. A tree reared up at him. Swerving, he almost walked into a fallen road mender's sign. DANGER. His shins ached with the imagined collision. Tonight even his soul shook with apprehension.

It's never where you look for it, he told himself. It always comes from somewhere else. Whereupon a dark shadow materialised from a doorway into an assailant, took him by the neck, pushed him face first against a shop window, told him not to shout or struggle, and relieved him of his watch, his wallet, his fountain pen and his mobile phone.

It was only when he had stopped shaking and was able to check his pockets and find them emptied that he could be certain that what had happened had happened in reality.

No wallet, no mobile phone.

In his jacket pocket no fountain pen.

On his wrist no watch.

And in himself no fight, no instinct for preservation, no
amour de soi
, no whatever the word is for the glue that holds a man together and teaches him to live in the present.

But then when had he ever had that?

He'd been a modular, bits-and-pieces man at university, not studying anything recognisable as a subject but fitting components of different arts-related disciplines, not to say indisciplines, together like Lego pieces. Archaeology, Concrete Poetry, Media and Communications, Festival and Theatre Administration, Comparative Religion, Stage Set and Design, the Russian Short Story, Politics and Gender. On finishing his studies - and it was never entirely clear when and whether he
had
finished his studies, on account of no one at the university being certain how many modules made a totality - Treslove found himself with a degree so unspecific that all he could do with it was accept a graduate traineeship at the BBC. For its part -
her
part - all the BBC could do with Treslove when she got him was shunt him into producing late-night arts programmes for Radio 3.

Wedding Night by Sophie Kinsella
Badfellas by Read, Emily, Benacquista, Tonino
Spookygirl - Paranormal Investigator by Jill Baguchinsky
Mail Order Cowboy (Love Inspired Historical) by Laurie Kingery
A Test to Destruction by Henry Williamson
The Maldonado Miracle by Theodore Taylor
Pecked to death by ducks by Cahill, Tim
Train by Pete Dexter
Over in the Hollow by Rebecca Dickinson
Heart of the Hunter by Madeline Baker
Our partner