Read The Fires of the Gods Online

The Fires of the Gods 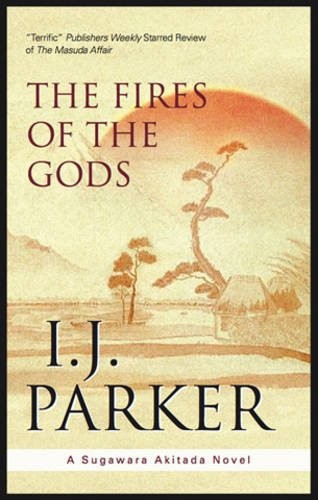 THE FIRES OF THE GODS

Recent Titles by I.J. Parker
in the Sugawara Akitada Series

THE FIRES OF THE GODS

THE FIRES
OF THE GODS

The Tiger and the Rat

The Gratitude of Rats

First, I owe thanks to my friends Jacqueline Falkenhan and John Rosenman for their generous comments and suggestions on the early version of this novel. Their steadfast support and encouragement keep me going. Next, the editorial assistance at Severn House is superb, and special appreciation goes to Rachel Simpson Hutchens for her excellent insights and for catching my errors in detail and style. And finally, as always, I am indebted to my agents, Jean Naggar and Jennifer Weltz, for their continuing efforts on my behalf.

T
ora stepped into the dense summer night and looked up at the roiling black sky above the jagged lines of roofs. Trees tossed their branches in the hot wind, and the dust swirled under his feet. Then thunder crackled and a flash of lightning momentarily lit up the empty street. Ducking his head, Tora clutched the batch of loose gold and silver coins inside his jacket and hurried towards home.

The streets were dimly lit here and there by garish paper lanterns marking wine shops or houses of assignation. They swung and danced in gusts of wind, throwing weird shadows across the street and on the walls of houses. A nasty night!

Tora did not care. He had been lucky. Playing at dice most of the night and buying a lot of wine, he had won magnificently. It meant that he could make the final payment on the small farm outside the capital. Sucking in a breath of warm air, he flexed his muscles, and felt blessed. Being a son of farmers, he had longed for many years to own his own bit of land.

His glee faded a little at the thought of telling his wife the good news – he was bound to get another lecture. Hanae disapproved of gambling.

He was preoccupied with this problem when, somewhere in the Sixth Ward, someone rushed from an alley and collided with him. They both went sprawling in the dirt, scattering Tora’s dubious fortune across the rutted street.

Tora scrambled to his feet and saw in a flash of lightning that the stranger was scooping up his coins with amazing speed and dexterity. ‘Hey!’ Tora shouted and lunged for the thief. They fell together, rolling around in the dirt, punching and kicking. The thief was slight and wore silk. A woman? Tora relaxed his grip. The next moment, his attacker had slipped out of his grasp.

‘Drop my money, you little tart!’ Tora lunged for her wrist. She sank her teeth into Tora’s hand and put a fist in his eye. He howled and let go.

The eye hurt badly, and Tora felt it to make sure it was still there, then he groped around for the thieving little whore.

She was gone. He got to his feet. Lightning lit up the street again and he saw her blue and white robe disappear around the far corner. Some of his gold pieces lay scattered a few steps away. He went to pick them up, but more people had erupted from the dark mouth of the alley. He was dimly aware of young faces and hissing breaths. Something struck his head, and he fell to his knees, retching. They laughed, then a clap of thunder drowned out all sounds. The darkness was filled with swirling, multicolored stars, and Tora stayed down until the stars dimmed and he was sure that the sour taste in his mouth was not followed by the wine in his stomach.

By then, his attackers were gone. People came from a wine shop to help him to his feet. They commiserated, but one of them bent and palmed a coin before they left. He stayed, cursing and unsteady on his feet. His small fortune was gone, and with it any hope of convincing Hanae that he had gambled for their welfare. Glumly, he brushed himself off and looked around for coins the thieves might have missed. There was nothing but a small blue silk bag with a broken string, the kind people used for an amulet. He picked it up and was about to leave when his nose caught a hint of smoke.

There is smoke, and then there is smoke. The nights in the capital were redolent with the scent of burning pitch pine from the torches used to light the streets and gates. This smelled serious. He turned his head to sniff the air, then hurried into the dark mouth of the alley.

It was short and led to another street of shops. There, in the distance, Tora saw a reddish light flickering. People shouted. A thin, high wail rose above the noise.

It was another fire.

This street passed between rows of adjoining small shops with homes attached in the back. In such streets a fire could jump from roof to roof and race across the quarter in an incredibly short time. Already the front of one of the shops was filled with flames, and thick smoke spread over the area. As he ran towards it, Tora saw a small figure that seemed to be dancing about in front of the conflagration. The creature was shouting and waving its arms as if it were cheering the fire on. To Tora’s horror, its body was covered with small flames. It looked like a demon had come straight from hell. Tora slid to a halt, his hair bristling.

They were calling them the fires of the gods, and the capital had been plagued by them for weeks now.

In another flash of lightning, he saw shadows creeping from the darkness to watch. The dancing demon seemed to make several attempts to jump into the fire, and someone was praying to Amida.

Tora shuddered. He joined the watchers and, with a nod to the fire demon, asked, ‘What is that thing?’

‘Young Kaneharu?’ Tora looked more closely and saw now that the demon could well be a human on fire.

He rushed forward and grabbed the man. He looked scarcely human, his nightclothes aflame, his face blackened, the whites of the eyes and the open red hole of his mouth the only features. A clap of thunder drowned out his words. Tora threw him on the ground and rolled him in the dirt. The burning clothes seared his hands, but he did not stop until the last flame was extinguished. Young Kaneharu moaned and babbled.

Chaos broke out in the street; people shouted and rushed about in a panic. A few came to look at the burned man, who finally became quiet.

Young Kaneharu twitched and opened his eyes. He said in a clear voice, ‘My father’s in there,’ and struggled to get up.

Someone explained that the man was the owner of the shop and had been trying to get his aged father out.

Tora looked at the fire, which by now filled the entire front section of the house and was coming through the roof. He asked the injured man, ‘Where’s your father? Where in the house?’

The old woman said, ‘He’s all the way in the back.’

Young Kaneharu nodded. His hands looked charred. Tora was afraid to look at his own. They hurt viciously, but the man was in worse shape with burns all over his body. The skin that showed through the holes of his clothes looked blistered. He must be in dreadful pain. Even so, he reached for Tora with his charred hands. ‘Please save my father.’

It seemed hopeless. These houses were built of wood, bamboo, and grass matting. The fire had gained the upper hand, and Tora could see past the shop to the back where the flames were leaping up to the neighbor’s roof. There was no way to get through those flames.

Tora got up and shouted at the gaping crowd, ‘Don’t stand around. Get sand and use buckets to bring water from the nearest canal. Make a chain and pass the water along. Throw it on the fire and pass the buckets and pails back.’

They knew the routine, kept a bucket of sand in every house in case of accidental fire, but this fire was already much larger than what a single bucket of sand could extinguish. They started running, though, and perhaps it would rain in a moment. Tora turned back to the moaning man on the ground.

‘Is it possible to get in from the back? From an alley?’ he asked.

The man looked dazed with pain. Tora had to repeat the question before he nodded. ‘An alley, yes. An alley. Save him.’

Tora left the fire to the weather and the neighbors. They had the most to lose if the flames spread and so would do their best to put them out. He ran down the street, the first raindrops cooling his face, looking for an opening between buildings that would lead to the backs of the houses. He found it five houses down and, guided by fitful lightning, scrambled over rain barrels, bamboo staves, empty chicken crates and other objects to reach the narrow alley.

As he doubled back towards the fire, he ran into the thick, acrid smoke produced by wet wood. The wind had shifted, and it choked him, making him cough and his eyes water so that he could barely see. Through the murk appeared the orange light of flames. To his relief, the fire had not yet reached the back of the house. Covering his mouth and nose with a sleeve, he vaulted a low fence into the yard of the burning house. The yard, too, was choked with odd objects, hazy shapes that got in Tora’s way. The hot air carried burning bits that started small flames among the debris.

Tora’s lungs labored for every breath and burned as painfully as his hands. He knew he had very little time to find the old man. Half-blinded, he found a shuttered door and pulled with hands that felt raw. A thick cloud of hot, suffocating smoke came out and drove him back. He coughed and gasped, then plunged into the dark room, holding his breath and feeling his way. His foot touched a body, and he bent to feel for the old man. There was no movement or response, and Tora needed air. Staggering back outside, he drew in a lungful of smoky air and choked.
Suppressing the coughing bout, he dived back in, found the old man’s ankles and pulled him outside. There his strength gave out and he fell across the old man, his last conscious thought of Hanae and his little son.