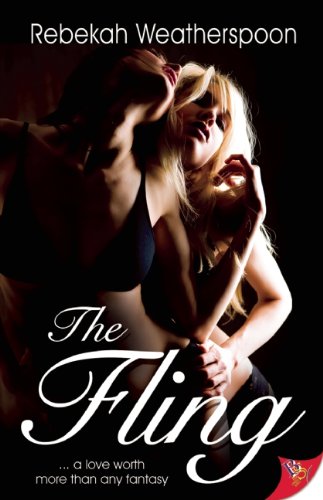 Three months before her wedding to her post-college sweetheart, reality show producer Annie Collins finally acknowledges her dormant desires. Wrapped in the arms of another woman—her trainer, Oksana Gorinkov—Annie experiences a physical heat she never knew existed. Soon the one-night stand meant to be her final farewell to the single life stretches into a consuming month-long affair, the genuine intensity of which neither woman can ignore. Annie sees where her heart belongs, and though the objections from her family and friends and the scars from Oksana’s ex threaten to drive them back to their respective sides of Los Angeles, Annie knows she must fight for this relationship, a real love worth much more than any fantasy she’s ever dreamed up. 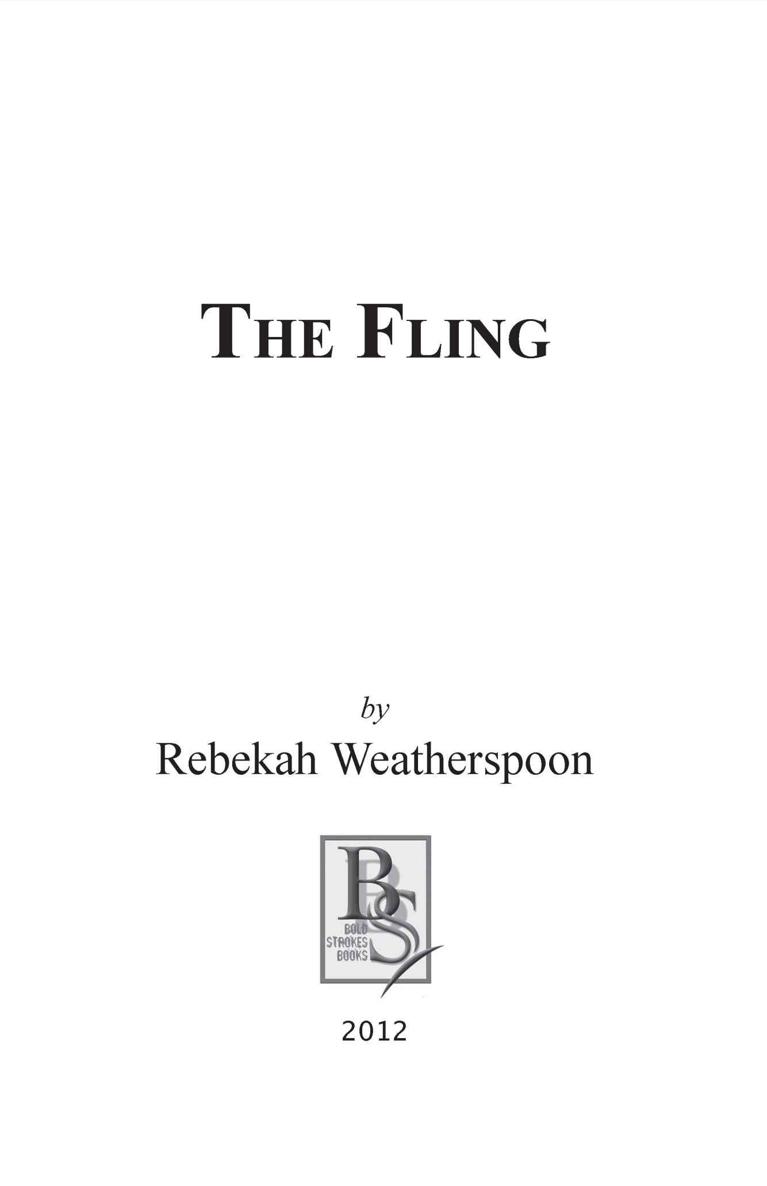 © 2012 By Rebekah Weatherspoon. All Rights Reserved.

I must thank the following people:

My editor, Cindy. You are a saint.

Olya, the only Russian exchange student my family wanted to keep.

Inna Sysevich. I’m sorry I’ve forgotten eighty percent of the Russian you tried to teach me, but I’ll be back soon for more instruction. And thank you for all the hugs.

And as always, Radclyffe.

To Vanessa and Maria.
I know you’re not doing it, but you totally should.

And to T, the executive producer of my heart.

Annie had already seen the tattoos that covered her trainer’s left arm, and from the occasional slip of fabric, she knew there was more ink across Oksana’s stomach and side. But for all of the body art that was revealed as Annie undid the ivory buttons hidden among the white ruffles running down the center of Oksana’s short sleeve blouse, the tiny gunmetal barbells going through the hard, pink nipples came as a complete surprise.

Annie let Oksana open the front closure of her bra. Annie’s breasts were way too big for front closure bras. Her cleavage destroyed the clasp if she was bold enough to cough. Oksana’s breasts were smaller. Small and perky, and even without the piercings, Annie would have been fascinated by the light pink tips, the same cocoa-pink as Oksana’s full lips.

“They don’t scare you, do they?” Oksana’s soft, husky voice filled the thick air of the hotel room.

“No. Not at all.” Annie leaned a little closer and studied the barbells some more. She stopped her hand before her fingers brushed the left nipple. She looked up into Oksana’s dark green eyes that were darker and hooded in the golden light from the lamp near the TV. “May I?”

Oksana swallowed and nodded bashfully, her teeth clutching the inside of her bottom lip. The gesture was pretty adorable. Annie smiled and took a deep breath. This was no time for
her
to be shy. This was all her idea. Oksana may have been the actual lesbian, and yes, she’d volunteered, but this was Annie’s plan. Annie’s fantasy.

They’d met at the bar, greeted each other with the same smiles and the same warm hugs they shared in the gym. They’d chuckled foolishly the entire way up in the elevator, joked nervously about how big the bed was and the awkward placement of the huge desk protruding from the far wall.

Finally, the laughter faded and they faced each other. Annie realized as Oksana looked down at her, still biting that lip, that she would have to make the first move. In all her fantasies and most of her wet dreams, she’d always been the aggressor. She’d always wanted to fuck another woman, to be the fucker, not the fuckee, and with the way Oksana watched her, seemingly reluctant to instigate the first bit of contact, Annie knew if she played her cards right, her
whole
fantasy would come true.

Annie swallowed once more and forced herself to relax. Tonight she wasn’t Annie Collins, bride-to-be and line producer on three hugely popular reality TV shows, and Oksana wasn’t one of the best personal trainers Los Angeles County had to offer. They weren’t almost friends. Tonight, for one night, they were lovers.

Annie licked her bottom lip and leaned forward. She’d skip the fingers and lead with her mouth. Her eyes closed as her tongue curved around the small piece of steel. She moaned when Oksana let out a light gasp. Annie never thought something so basic could be such a turn-on. She was simply licking someone’s nipples, but Annie’s body reacted instantly and her mind began to wander toward the opportunities these piercings presented. She’d been aroused the moment she saw Oksana waiting for her downstairs, but as the slick skin between her lips began to pucker even further, Annie could feel her own pussy soaking, the swollen muscles between her legs growing thick and hot.

Annie pulled back as Oksana shuddered, and she drew the flat surface of her tongue up Oksana’s breast to the height of her ribs. Oksana took a small, faltering step back, whimpering once more as she grabbed on to Annie’s shoulders.

“Are they sensitive?” Annie asked before licking up again then swirling her tongue over the very tip. She switched to the other piercing, hoping the answer was yes. She could easily suck on Oksana this way all night.

“Yes,” Oksana pinched out, then drew in a deep breath. Annie followed as Oksana leaned against the bedpost. Oksana began to tremble. Annie took that as a good sign, pulling more of Oksana’s breast into her mouth, varying the swirling strokes of her tongue as she wrapped her arm around Oksana’s waist. “Annie. Wait.”

Annie blinked up, panting as her own lustful need spiked. “Yeah?”

“Sure,” Annie replied with a shaky laugh. She knew Oksana was close to coming. She thought that was a good thing, but maybe Oksana wasn’t such a cheap date as Annie was. Annie liked coming right away, then coming again. She shook herself slightly. She should have asked what Oksana wanted before she went full force for her chest. Annie took a step back, but Oksana reached for her before she could retreat altogether.

She decided to focus on Oksana’s eyes instead of her exposed breasts or where their fingers were touching.

“You’re doing fine, but you wanted all night, remember?” Oksana’s tone was filled with patience.

“Then let’s take all night. We don’t have to rush,” Oksana replied. She stroked the back of Annie’s hand, reassuring her that Annie had made the right decision. Oksana was the one.

Oksana got rid of her shirt and her bra then reached for the button on her flared-bottom trousers. Annie followed her cues and pulled her own top over her head and reached for the zipper at the back of her tight skirt. She watched Oksana as Oksana watched her, until they were nearly naked, underwear and shirts, and stilettos and flats in two piles beside the bed.

Annie was nervous about how Oksana would view her body. Oksana had told Annie plenty of times how proud she was of her for reaching the fitness goals they’d set together, but that was praise from trainer to client, not a comment from lover to lover. They had only planned on one night, but Annie wondered what kind of woman was Oksana’s type. Was Annie too short? Were her breasts too large?

With their encounter in mind, Annie had examined herself in the mirror earlier that night. Her thighs were slimmer than when they first met. Most of the fullness from her chin was gone, along with some of the weight on her stomach and arms. Her breasts had stayed the same size, though. They drew attention no matter what she wore, and they’d always produced a sense of awe in the few who had seen them bare. She felt so exposed as she tossed her bra to the floor. Nothing would happen between them beyond this night. Still, the temporary terms of their sexual relationship didn’t stop Annie from wondering what Oksana thought about her. And not just her body. Maybe Oksana really liked tougher women, with a lot more muscle and some knowledge of power tools. Maybe this was charity for Oksana in more ways than one.

But as Annie looked back up from the clothes at her feet, she saw she wasn’t alone in her bashfulness. A light flush touched Oksana’s skin as Annie’s eyes wandered over her body again. She was so perfect. No hair between her legs, and the sheen of her wetness was obvious from a few feet away. Her full thighs were topped with wide hips. And those piercings. Annie had been waiting months for this chance, mulling the fantasy over for years. Oksana was right; they should take their time. Annie stepped toward Oksana at the same moment Oksana moved in her direction. She matched Oksana’s nervous laughter and giggled even louder as they both took a step back. With a shrug, Annie relented and met Oksana beside the bed.