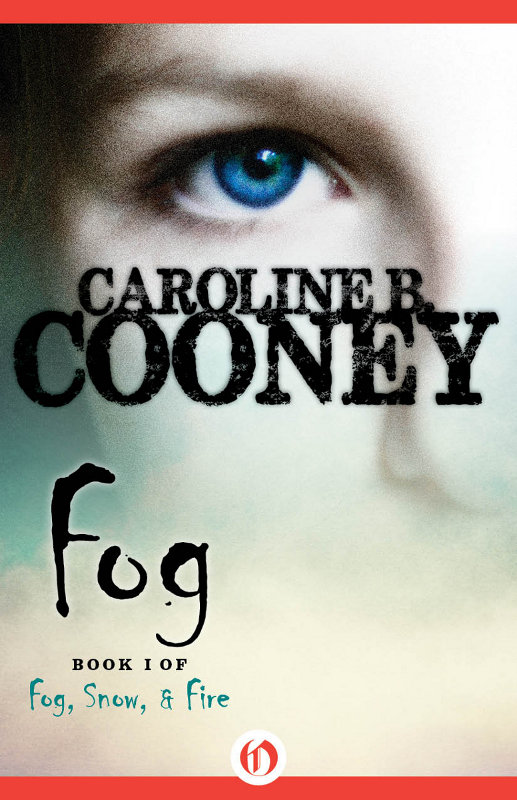 A Biography of Caroline B. Cooney

I
T WAS VERY HOT
the last week before school began: as though the wind from another world were crossing the island.

Christina packed her trunks, filling them with the heavy sweaters and thick socks she would need for a Maine winter.

Her mother kept handing her things like long underwear and pajamas with feet. Hand knit mittens with snowflakes and bathrobes with hoods. Christina would never wear such things in front of mainland children. She put them on the bottom layer of the trunk, planning never to touch them.

Burning Fog Isle had only three hundred year-round residents. Twenty-eight miles out to sea, it was Maine’s most famous, most beautiful island. And it had only four children between the ages of thirteen and seventeen, so once they finished sixth grade, they were sent to the mainland for junior and senior high.

Christina knew the town on shore almost as well as the island; her father’s truck and her mother’s car were kept in garages by the dock; they went into town on Frankie’s boat a couple of times a month; they saw movies and shopped, went to the dentist, and got sneakers on sale just like everybody else.

It was only school that Christina had not done like everybody else. Christina had never been in a school with classrooms, a cafeteria, hallways, bells that rang, art, music, gym, and hundreds of kids. Now she would be in junior high; instead of four friends, she would have dozens.

Christina had been told that going to the mainland would be an Advantage. “You will have Advantages there,” people said.

Advantages sounded rather dull and sturdy, like winter socks.

Christina did not want any part of that. She wanted love, adventure, and wild, fierce emotions that would batter her, as storms battered the island. I am thirteen, Christina thought, I am ready. I want it all.

Christina hurtled over the pink-flecked granite that was the symbol of Burning Fog Isle — huge, diagonally thrusting cliffs sparkling with silver mica. She ran past strangled fir trees growing out of cracks and leaped over the pink rock roses that dusted the rims.

She found the other children gathered on the hill above the village. The heat had worn them down; they looked collapsed and sunburned.

Benjamin, who would be a sophomore, regarded school as a state-mandated prison between fishing seasons. He ached for his sixteenth birthday, when he could quit school. He would turn sixteen around Thanksgiving, and he planned to stop school right then, that afternoon, and go home on Frankie’s boat. Benj was rightfully a lobsterman.

His brother Michael was going into ninth grade, and he had explained several times to Christina that ninth-graders never spoke to or associated with seventh-graders. She must not expect Michael to talk to her in school. If Christina tried to hold his hand, Michael would flatten her.

Michael was fourteen. Christina had adored him all her life, and Michael had not noticed it all his life.

But Anya? A beautiful, brilliant star of a student? Why was Anya not excited? It was going to be her senior year. Christina had always thought of senior year as a sort of heaven, glistening and full of rainbows.

But Anya was as tense and fidgety today as she had been all summer.

“It shouldn’t be so hot,” said Anya. “The ocean like glass? The morning sky free of fog? Everything is wrong.”

The children squinted in the glare of sun off the smooth water.

“You nervous about school starting, Christina?” asked Benjamin. Benj was never nervous. He was fifteen and solid. He had had his own lobster boat for years. Benj got up at four every morning, started the outboard motor like his father and uncle and cousins, and went out to sea.

Christina had read many books and Benj did not fit into any of them. He was the only fifteen-year-old boy Christina knew, but he had nothing in common with fifteen-year-olds in books. Benj was more like parents in books, only stronger. Nothing frightened Benjamin Jaye.

Christina did not know why he was asking if
she
was nervous. It was so clearly Anya who was. Anya shook her head, as if the strange stillness of the Atlantic Ocean bothered her ears.

Christina had always wanted to be and look just like Anya. Anya was very fair, and unlike everybody else on the island, whether year-around, day tripper, or tourist, Anya never tanned. Like a princess in a fairy tale, Anya remained chalk white, with a frame of black hair so thick and heavy it seemed to weight her slender neck.

“We get to stay at the Schooner Inne,” said Christina to the older girl. “Aren’t you excited about that?”

Schooner Inne was a lovely sea captain’s house, now a bed and breakfast, which usually closed down for the winter season. This year the Inne had new owners — the high school principal and his wife. They wanted to try staying open during winter and had agreed to take the four island children who had to board in town through the school year.

Anya’s parents were real Maine, and that meant they were poor. Anya hated being poor. She hated her tiny house, its shingles curled from the salt air, white trim peeling, enormous piles of lobster traps filling the little yard. Anya dreamed of cities: skyscrapers, escalators, high fashion, and taxis. She worked hard in school; striving, striving, striving to put Burning Fog Isle behind her and become somebody else.

Christina would be sharing a room at the sea captain’s house with Anya. Christina was worried. What if she didn’t please Anya? What if Anya grew angry with Christina for being younger, dumber, and duller? What if the town kids teased Anya for hanging around with a baby like Christina?

Mainland kids always teased island kids. Michael and Anya had given her instructions on how to handle the teasing. “Just laugh,” they said. “No fists. It doesn’t work. It gives the island a bad reputation.”

Nobody was more “island” than Christina. Everybody who saw her called her “local color.” She had had a thousand photographs taken of her, and been painted twice. “You are beautiful,” the tourists and the artists would tell her, but they would ruin it by smiling slightly, as if it were a weird beauty or they were lying. She was as harsh and stern as the pink granite she stood on. This did not make Christina happy. She had never read anything in
Seventeen
about strength as beauty.

Christina was the only child she or the summer people had ever come across with tri-colored hair. Mostly dark brown, it was streaked with silver and gold. With every movement, Christina seemed to change color. She loved her hair and wore it just like Anya, but on Anya the mass of hair was magnificent, and on Christina it was a tangled thicket.

When Christina studied
Seventeen
magazine, analyzing models, make-overs, and teenage stars, she found no resemblance between herself and those girls — not hair, lips, eyes, cheekbones, posture — nothing.

If she did possess any beauty, Christina did not know what it consisted of.

The sea captain’s house was beautiful. Symmetrical and graceful, high and white. Perhaps she would absorb some of that beauty just living there.

“Oh, Anya,” said Benj irritably. “That’s just a legend, and anyway it was a hundred years ago and who cares?”

“It might have been weather like this when the sea captain’s wife stepped off her roof,” said Anya. She walked away from the other children to balance on a granite outcropping that rose from the Atlantic Ocean like drowned rocks. She stared at the mirror of the sea as if reading her fortune in its seaweed-laden palm.

The sunshine poured out of the sky like liquid. The Atlantic did not move. Even though the tide was coming in, there was no sound of surf. No waves crashing against the rocks. No booming where air was slapped into rock pockets. The water just lay there, as if a personality stronger than the ocean itself had flattened it.

Below them, in the small, sheltered harbor of Burning Fog Isle, tourists gathered on the dock for the return boat to the mainland. Their baggage and suitcases littered the wharf. They crowded into the tiny souvenir shack, buying proof that they had visited the most famous island off the coast of Maine.

Christina thought, in a few days my island life will shut down. No longer one of the little children in the white schoolhouse, but off-island at last! Maybe I’ll even have a boyfriend like Anya.

Anya’s boyfriend was a very preppy townie named Blake. Blake had come out to the island once during the summer, as a surprise for Anya. Blake was dressed in what the children called Catalog Maine — a fine rugby shirt with wide stripes, high quality boat shoes without socks, and loose trousers made of imported cotton.

Christina was sure that what depressed Anya was not the strange weather, not the beginning of school, not having to room with somebody four years younger, and not even the oddity of boarding with the principal.

It was Blake. Her boyfriend had seen her as she really was — poor, island Maine. And would he, during their senior year, with SATs, football season, college applications, prom, and graduation, still be interested in Anya Rothrock?

Frankie’s boat nosed into the dock. The tourists jumped up and down with excitement. They got in the way, and their little children barely escaped falling into the water and getting crushed between boat and wharf. They abandoned the souvenir shack.

The souvenir shack was so dilapidated its roof had settled in a curve, and its door no longer closed. The shingles had fallen off the entire ocean side of the building. Winter weather would knock it down for good, and maybe the creature who ran it would never return.

The children called her a creature, rather than a woman.

She had skin like leather left out on the rocks — cracked and crusted. She wore fingernail polish as dark as dried blood, and several of her teeth were missing. She was the only person Christina had ever encountered who never went to the dentist.

The tourists clambered onto Frankie’s boat. Frankie’s dog, Rindge, snarled at all of them.

Frankie used to have a sweeter dog. Peg. How Christina had loved Peg! A soft Alaskan husky with eyes as blue as the sky. But Peg went overboard once to catch a hot dog a tourist tossed for her, and the sea was rough and Frankie couldn’t get her back, even though she was a good swimmer. Frankie tried so hard to reach Peg, and Peg tried even harder to swim back to him, but they didn’t make it. Peg drowned.

She shook the memory away. “You know what we could get at the souvenir shop?” she said. “Posters for our bedroom walls! Let’s all buy a poster.”

Christina loved to imagine her room at the Schooner Inne. Would she have a bed with a lacy canopy? Wallpaper with sprigged flowers? Would there be a little desk beneath the window, so when she tired of doing homework, she could look out across the sea? She knew what she would have on her bed: the quilt her mother had made her. Each square on the quilt had a lovely name: falling star, bear’s paw, flying geese. Dark reds, soft pinks, and rich blues tumbled together to make a work of art.

“I want a flower poster,” announced Christina, jumping from rock to rock, reaching the top of a long slanted wooden stair with splintered handrails. “Manet or Monet, or whoever he is, or both.”

But Anya did not want any posters in their room. “Let’s not go down there,” she said. “I’m afraid of that souvenir woman. Her eyes are too blue.”