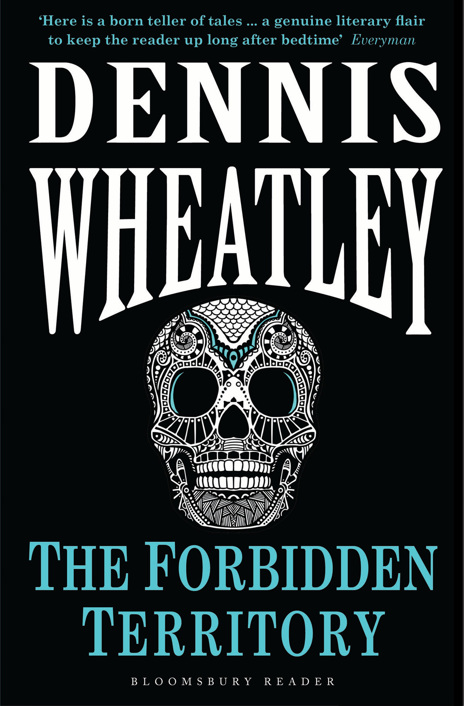 I. A Cry for Help

II. A Plan of Campaign

IV. Cigars and Pistols for Two—

V. The “Tavern of the Howling Wolf”

VI. The Secret of the Mine

VIII. The Price of Information

IX. Beyond the Pale

X. “Where the Railway Ends”

XI. Which Shows That a Little Yiddish can be Useful

XIV. The Secret of the Forbidden Territory

XVII. The Fight on the Roof-Tops

XXII. “He who Fights and Runs Away—”

XXIII. A Passport has Been Arranged

XXV. The Caves of Death

XXVI. The Dash for the Frontier

XXVIII. The Last Round

Dennis Wheatley was my grandfather. He only had one child, my father Anthony, from his first marriage to Nancy Robinson. Nancy was the youngest in a large family of ten Robinson children and she had a wonderful zest for life and a gaiety about her that I much admired as a boy brought up in the dull Seventies. Thinking about it now, I suspect that I was drawn to a young Ginny Hewett, a similarly bubbly character, and now my wife of 27 years, because she resembled Nancy in many ways.

As grandparents, Dennis and Nancy were very different. Nancy’s visits would fill the house with laughter and mischievous gossip, while Dennis and his second wife Joan would descend like minor royalty, all children expected to behave. Each held court in their own way but Dennis was the famous one with the famous friends and the famous stories.

There is something of the fantasist in every storyteller, and most novelists writing thrillers see themselves in their heroes. However, only a handful can claim to have been involved in actual daring-do. Dennis saw action both at the Front, in the First World War, and behind a desk in the Second. His involvement informed his writing and his stories, even those based on historical events, held a notable veracity that only the life-experienced novelist can obtain. I think it was this element that added the important plausibility to his writing. This appealed to his legions of readers who were in that middle ground of fiction, not looking for pure fantasy nor dry fact, but something exciting, extraordinary, possible and even probable.

There were three key characters that Dennis created over the years: The Duc de Richleau, Gregory Sallust and Roger Brook. The first de Richleau stories were set in the years between the wars, when Dennis had started writing. Many of the Sallust stories were written in the early days of the Second World War, shortly before Dennis joined the Joint Planning Staff in Whitehall, and Brook was cast in the time of the French Revolution, a period that particularly fascinated him.

He is probably always going to be associated with Black Magic first and foremost, and it’s true that he plugged it hard because sales were always good for those books. However, it’s important to remember that he only wrote eleven Black Magic novels out of more than sixty bestsellers, and readers were just as keen on his other stories. In fact, invariably when I meet people who ask if there is any connection, they tell me that they read ’all his books’.

Dennis had a full and eventful life, even by the standards of the era he grew up in. He was expelled from Dulwich College and sent to a floating navel run school, HMS Worcester. The conditions on this extraordinary ship were Dickensian. He survived it, and briefly enjoyed London at the pinnacle of the Empire before war was declared and the fun ended. That sort of fun would never be seen again.

He went into business after the First World War, succeeded and failed, and stumbled into writing. It proved to be his calling. Immediate success opened up the opportunity to read and travel, fueling yet more stories and thrilling his growing band of followers.

He had an extraordinary World War II, being one of the first people to be recruited into the select team which dreamed up the deception plans to cover some of the major events of the war such as Operation Torch, Operation Mincemeat and the D-Day landings. Here he became familiar with not only the people at the very top of the war effort, but also a young Commander Ian Fleming, who was later to write the James Bond novels. There are indeed those who have suggested that Gregory Sallust was one of James Bond’s precursors.

The aftermath of the war saw Dennis grow in stature and fame. He settled in his beautiful Georgian house in Lymington surrounded by beautiful things. He knew how to live well, perhaps without regard for his health. He hated exercise, smoked, drank and wrote. Today he would have been bullied by wife and children and friends into giving up these habits and changing his lifestyle, but I’m not sure he would have given in. Maybe like me, he would simply find a quiet place.

The Forbidden Territory
Chapter I
A Cry For Help

The Duke de Richleau and Mr. Simon Aron had gone in to dinner at eight o’clock, but coffee was not served till after ten.

Aron had eaten sparingly of each well-chosen course, and to one who made a hobby of such things the wines had proved a special pleasure. Since their mutual friend Richard Eaton had brought them together, he had dined on many occasions with De Richleau at his flat.

A casual observer might have considered it a strange friendship, but despite the difference in age and race, appearance and tradition, the two had many tastes in common.

Both the young English Jew and the elderly French exile loved beauty in its many forms, and could linger happily over a jade carving or a page of prose. They had also developed a pleasant rivalry in producing for each other great wines, fine food, and well-matured cigars.

Aron accepted a long Hoyo de Monterrey from the cedar cabinet which the Duke’s man presented to him, and his dark eyes flickered towards his host.

During dinner the impression had grown upon him that there was some special reason why the Duke had asked him to dine on this occasion. His intuition had not deceived him. De Richleau exhaled the first cloud of fragrant smoke from another of those long Hoyo’s, which were his especial pride, and drew from his pocket a dirty piece of paper, which he flicked across the table.

“My friend” he said, raising his grey eyebrows a little,
a slightly cynical smile on his thin lips, “I should be interested to have your opinion on this curious document.”

Simon Aron unfolded the piece of grimy paper. It had light blue rulings upon it, and was covered with a pencil scrawl; it might well have been a page torn from an exercise-book. Simon’s full mouth broadened into a wide grin, and, with a sudden gesture peculiar to himself, he gave a little nervous laugh, stooping his bird-like head with its pronounced nose to the hand which held his long cigar.

“Well, I’ll tell you, I’m no good at puzzles,” he grinned, “never done a cross-word in my life—but I’ll see what I can do.” As he spoke he took a pair of tortoiseshell spectacles from his pocket and began to study the crumpled paper, reading it out slowly as he did so.

“
Since I left the New York centre I have been investigating the possibilities of mineral wealth in this country.

“
There is one mine containing valuable deposits which has been closed down for a number of years, and I had hoped to get it going. Unfortunately, before I could do so, I was sent to the place where Comrade Eatonov was for a short time.

“
Work at the London centre must be almost at a standstill with the present reactionary Government in power, and if my transfer from here could be arranged for, I should badly need skilled assistance at the mine, so if you could come over, your help would be most welcome.

“
I would like to have met you in Moscow, but that will be impossible now. You can get all the information regarding the mine at Jack Straw’s. If little Simonoff is still with you, perhaps both of you could come.

“
I certainly need help pretty badly in my present position—it’s too much for me alone.

“
Your old comrade and fellow-worker,

Simon Aron shook his head with a little wriggle of his narrow shoulders. “How did it come to you?” he inquired.

The Duke passed over a flimsy envelope with which he had been toying. “Just so, my friend,” he said, lightly, “you will note that this bears a Finnish stamp, and was posted in Helsingfors.”

Simon examined the writing on the envelope. It was thin and angular—very different from the pencil scrawl of the letter—and bore the legend:

“I—er—suppose it’s not a mistake?” ventured Simon, thoughtfully. “I mean, it is meant for you?”

The Duke ran the tips of his fingers down his lean, handsome face. “At first I was inclined to suppose that it had been sent here in error, but now I am convinced that it was intended for me.”

“Yes, the name misspelt—also Errol House, no mention of Curzon Street, or Mayfair, or any district number. But tell me—who do you think it is from?”

“Tsarderynski,” Simon murmured, “don’t know—never heard of him; looks like a letter from one Bolshie agent to another, on the face of it.”

Seducing Wrath by Lynne St. James
Gingham Bride by Jillian Hart
Guardian (Daughters Of The Gods, Book 2) by Gill, Tamara
The Con by Justine Elvira
Access to Power by Ellis, Robert
The Unwilling Accomplice (Book 5) by Heidi Willard
The Nine Pound Hammer by John Claude Bemis
A Tale of Two Centuries by Rachel Harris
The Puppet Masters by Robert A Heinlein
The Seduction 3 by Roxy Sloane
Our partner