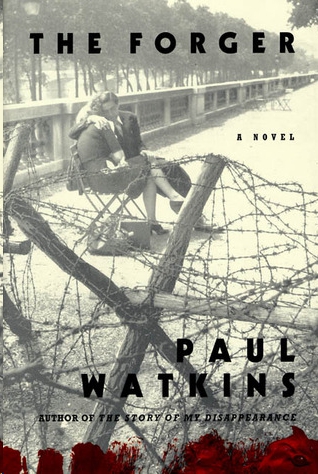 A Note on Two of the Paintings in the Text

I
REACHED
P
ARIS EARLY
in the summer of 1939, at the age of twenty-one.

All my life, I’d dreamed of coming here. A thousand times, I had pictured myself as I was then, getting off the train at the Gare St. Lazarre. Now that the moment had finally arrived, it seemed to me even more glorious than anything I could have imagined.

This lasted about ten seconds.

Halfway down the platform, one of my suitcases fell open. Tubes of paint, brushes and palette knives scattered on the ground. I swore quietly, got down on my hands and knees and began to gather them up. Travelers stepped past, shuffling to get around. Then a pair of boots appeared in front of me. They were black and mirror-polished. Slowly I raised my head, squinting in the sunlight that beamed down through the glass roof of the station.

It was a policeman. He wore a black uniform with a row of silver buttons down his front and a stiff-brimmed cap set squarely on his head. He had a short mustache and eyes as dark as his boots. The man held his hands behind his back. He was not smiling.

Someone had trodden on a tube of crimson paint, tracking red footprints across the platform.

“Just what we need,” he said. “Another artist.”

T
HE MONTH BEFORE
, I had received a letter, notifying me that I’d been awarded a scholarship by the Levasseur Committee for Fine Arts. After a show of my paintings in New York City, I’d been interviewed by a French art magazine called
Le Dessin.
Not long afterwards, I heard from the Levasseur Committee. The scholarship entitled me to three months study at the Atelier Alexander Pankratov, 21 Rue Descalzi. A stipend was included for living expenses and an apartment would be rented for me. I hadn’t applied for any scholarships and I’d never heard of the Levasseur Committee, but no one had to talk me into going.

My ship was late arriving in Cherbourg. By the time I got to Paris, classes had already begun.

I took a taxi straight to the atelier. It was five flights up a set of wide and worn-down stairs. No elevator. Outside the atelier, I stopped to catch my breath and set down my suitcases. I wiped sweat off my face with a handkerchief, then opened the door.

The atelier was one huge room. An entire wall was filled by a window that overlooked the city. The panes were old and gave a rippled view of houses, trees and roads, making them seem drunk and crooked, like a hundred-piece puzzle that had been forced together even though the pieces didn’t fit. The rest of the room was paneled with dark wood and patched with corkboard which had been nailed up haphazardly for the display of student sketches.

In the middle of the room was a platform. On it was a naked woman. She was sitting on a chair with her back to me, so all I could see was the slightly freckled sweep of her shoulders and dark hair pony-tailed down the middle of her back. It was about the most beautiful hair I’d ever seen. Dark and shining as Oriental hair, but glimmering deep lacquer red among the silk-fine strands, like wine held up to sunlight. Perched around her on high-legged stools were the other students in the atelier. But only two of them. A woman and a man. They were both sketching at their easels but stopped to look up when I appeared. I wondered where the others were. Surely there have to be more, I thought.

The noise sent me stumbling backwards. I peered into the gloom, trying to see who had shouted.

There was a shuffling of paper. The naked woman shifted her position. A new round of sketching began.

It took me a second to pinpoint the source of the voice. Now I saw a man sitting in the shadows. He was short and broad-shouldered, with a tattered fluff of gray hair that made him look as if he were emerging from the smoke of an explosion. His eyes were slightly narrowed, as if waiting for another detonation. He had the jutting chin and crumpled lips of a man about to spit.

The man slouched in a flimsy chair made of wood and canvas. The armrests were leather straps, and the canvas seat and back were held in place by a rope that threaded through a series of brass grommets. It all looked as if it might at any moment dump its owner on the floor. My first thought, however, was that the chair, like everything and everyone else in the room, was so terrified that it would never dare to fail him.

I stood in the doorway, waiting to be asked in.

The man appeared to be ignoring me. He rested his elbows on the straps of his chair and touched the tips of his fingers together, just in front of his face. His eyes stayed closed and his mouth twitched as if he were counting to himself.

I lugged my suitcases over to an empty stool, smelling the sharp sap reek of turpentine, which knifed through first one and then all of my senses. I felt the closed-off trance that came when I was painting. I looked up at the shelves along the walls and saw the dirty bottles filled with linseed oil the color of tea. Their tops were stuffed with dirty rags, like an arsenal of gasoline bombs.

I got hold of a piece of charcoal and some paper from my suitcase and squinted at the model, ready to draw.

She was staring right at me, sitting slightly bent forward with her hands pressed together between her knees. Her feet were set apart, resting on her curled toes like a ballerina. She had a very round face. There was something almost Asiatic about her eyes and the height of her cheekbones, but her skin was pale, and she was tall and full in her body, and seemed so completely at ease with her nakedness before us that she gave the impression of someone who did not understand the point of clothing.

I had drawn precisely one line when the man’s eyes popped open. He launched himself out of his chair and shouted, “Stop!”

A sigh passed through the room. The two students sat back from their work and laid down their pencils.

From far below in the street came the sound of cars shifting through their gears as they gathered speed down the Rue Descalzi.

The model stood up from her bench and stretched, raising her arms above her head and locking her fingers together, bending them back on themselves. The whole sweep of her body stretched in one unbroken smoothness from the muscles of her thighs up to the tendons of her neck.

The man paced behind us, saying nothing. Now that he was on his feet, I saw he was shorter than he’d first appeared. When he reached me, he stopped. I heard him stirring his toe in my open suitcase, shifting the jumble of paint tubes. Then his head appeared over my shoulder.

“You are Monsieur Halifax,” he said. He pronounced it “Alley-fax.”

“Yes, sir,” I replied, not turning my head to face him because he was too close.

He nodded slowly, looking at the single smoky line that I had drawn. “Alexander Pankratov,” he said, as if that were not his name but an elevated state of mind which I would never fully grasp. “You speak French,” he told me.

“Yes, sir,” I said, wondering how he could judge that from only two words. My mother was French Canadian and had taught me French at the same time as she taught me English. Some of my Québécois phrases might have sounded old-fashioned to the French, but I could make myself understood.

“Yes, sir. From America.” I rummaged in my jacket for the acceptance form that carried his signature. “I have the Levasseur scholarship. I’m signed up for…”

“I know you are signed up,” he snapped.

Slowly, I let my hand slip down from my inside pocket.

Pankratov moved on to the others.

It was only now that I had time to study them. My first instinct was to look at their work, even before I looked at them, but the easels had been arranged in such a way that I couldn’t see what they’d drawn. Both had been issued white smocks, which made them look like hospital patients.

The woman looked to be in her mid-forties. She kept her chin raised in a gesture of dignity and defiance, but the way her eyes followed Pankratov’s every move showed what lay behind her barricade of confidence.

The male student had dark and bushy hair, a broad nose and heavy lips. His complexion was rough and red, as if maybe he drank a lot. He had two pencils in his mouth. He ground his jaw and the pencils waggled like antennae. The ends were chewed to splinters. He seemed very pleased with his work, tilting his head from side to side in admiration of the drawing and brushing at the charcoal lines with the side of his thumb to blur the edges. When he stood to remove his apron, I noticed he was heavy in the chest without being overweight. His hands were strong and muscular. He dragged his fingers down the stubbly shadows of his chin, which made a gentle tearing sound and left a dull gray smudge.

The student had taken off his smock and left the cord around his neck, so that the white sheet trailed down his back like a circus ringmaster’s cape. The man realized I was looking at him. He turned his head and smiled at me. He held his charcoal pencil as if it were a dart he was preparing to throw at me. “Pankratov likes you,” whispered the man. “He didn’t give you his withering stare.” He hardened his gaze into an evil squint to imitate Pankratov. “He’s quite mad, you know. I mean, a genius, of course, but quite mad.” The student leaned forward and murmured, conspiratorially, “He drinks turpentine while he’s painting.”

I had heard about some artists who did that. Sometimes I felt the same temptation. When the clean burn of it is pinching in your lungs and nose and its vapors are washing cold through your blood, it is hard not to want to feel it even stronger inside you, to have the essence of your own painting suicidally pumped by your heart.

“We’re all going down to the café afterwards,” he said. “You ought to come.”

“Monsieur Balard!” barked Pankratov from the other side of the room.

“You are always talking about what will happen after the class.”

Pankratov mumbled something unintelligible, which made him sound like a clockwork machine running down. He turned away to face the window.

Belle Fury: Manhatten Ten, Book 3 by Lola Dodge
A Day in the Life by Jade Jones
High Country Fall by Margaret Maron
Just Keep Sweet (The Compound Series) by Melissa Brown
December by Phil Rickman
Rise Of Empire by Sullivan, Michael J
Caribbean by James A. Michener
A Heart in Jeopardy by Newman, Holly
The Spinster Bride by Jane Goodger
The Bride of Larkspear by Sherry Thomas
Our partner