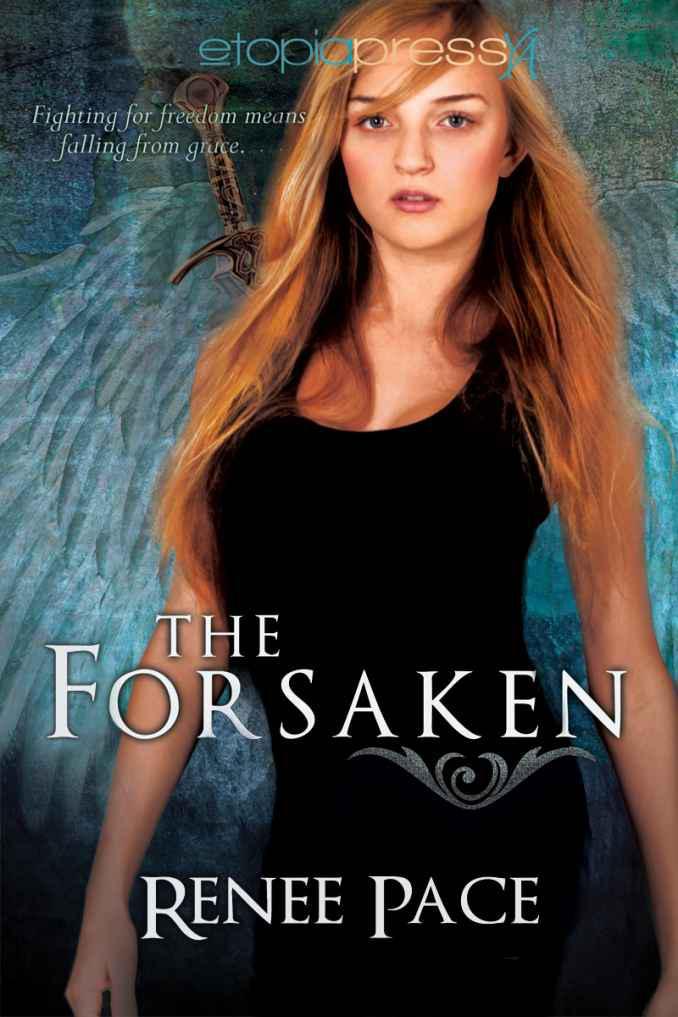 This book is dedicated to my daughter, Talia. You, my dream-child with three older brothers, will learn how to fight for your independence. And your songs fill my heart with joy. Keep on singing!

To my husband, Brian, for his encouragement, love, and hugs that always make my day.

To all the girls out there wondering if they can make their own way—oh yes you can.

To all my fans. I hope you enjoy this book as much as I enjoyed writing it. I truly would love to hear from you at [email protected]

The overwhelming smell of incense made Izzy gag, but she refused to allow her body that rebellious desire. Using the Kita, she sliced at the demon, enjoying the sound of its skin ripping open but not its sulfur stench. A second ago, the demon had been shredding an older Cherub who hadn’t tried once to defend herself.
None
of the older Cherubs seemed to want to defend themselves. Demons had been attacking the heavens for the past months, their steady assault slow but determined. Until the last demon was dead or until the heavenly gates were fixed and sealed anew, their assault would continue and more of her sisters would die. And a demon death meant their souls would go straight to Hell.

War had brewed for centuries between the noble houses, but it had taken the kidnapping of a Seraphim child to elicit bloodlust. Many thought the angels who were fighting amongst themselves were a diversion Lucifer was using to mobilize his demon army, and Izzy highly suspected they were correct.

Izzy ducked, a demon’s snarly clawed hand missing her head by inches.
That was close. Too close.
She twisted her body in a move she’d practiced daily since taking up arms, glad now for those tedious days she’d endured being yelled at by their teacher while sweat dripped in a very un-Cherub way down her back. If her mother still lived, Izzy would have been chastised for sweating. Cherubs were sweet and innocent and most certainly did not have body odor. Not that sweating had deterred the one person she’d begged to teach them to defend themselves: a Seraphim, a male warrior angel, who hadn’t wanted to teach them anything about weapons, but one who had agreed to his detriment—and today she thanked him for all those lessons.

Pushing the Kita up, she used all her might to leverage the sword in a swift arch, cutting through the demon’s hand. Minus one hand, and soon to be minus a head. But Meredith was faster. Using speed and agility, Meredith threw the holy water at the demon, while Izzy moved onward. A cluster of demons, their rotten-egg stench easily identifiable, were making their way toward the Cherubs.

“Get those Cherubs out of here,” said Izzy to Meredith, indicating with her head the six older Cherubs who didn’t seem to have any common sense when it came to their safety. “I will take care of this.”

“There’s too many,” said Meredith, her best friend, stating the obvious.

“No time to argue this. Do as I say. They need to leave, and they won’t unless you make them.”

Meredith nodded, knowing when to back off when Izzy was in a fighting mood. Izzy turned her attention back to the horde of demons, thinking they could very well be the death of her.

By the blessed light, I will go down fighting and no more demons will kill Cherubs on this morning.
Stalking forward, armed with her Kita and the two knives strapped to either side of her legs, plus the dozen of holy vials cinched on the belt around her waist, she charged at the demons. For once she enjoyed their look of surprise.

Cherubs did not attack.

Guess they didn’t know she was different.

“Your actions have cast a black mark on your name. You were warned to stay out of this fight. For your disobedience and because you recruited your fellow Cherub sisters to join your independence movement, you will all be punished as an example. Disobeying heavenly decree, no matter what the motivation, is not accepted.”

She knew Raphael made his task showy when his pointed whip sliced through the air to punctuate the ending of each sentence. He spoke in pleb, the language of the lowest caste, further condemning Isabella by treating her like a commoner. His authoritative voice peppered through the pain that gripped her body. She gagged on the blood in her throat.

Biting the insides of her cheeks, she tasted her own blood, her own life essence. “We want to help. We can aid in this heavenly war. We are only striving to serve the greater good.” She ground out the words—a feeble attempt to reclaim a semblance of dignity. She wanted him and the
Septuagint Council
—the thirteen-member council that had ruled against them—to understand their desire to help.

The demons pounding on the heavenly gates were increasing in number, and their attacks into the heavenly realm had only grown more brazen over the recent months. To sit on the side and watch her brethren fall had been too much for Isabella. A gasp from one of her sisters forced her mind to the present. She almost wished it hadn’t.

“Order must be maintained. Your actions are causing discord.”

Raphael swept out his arm, forcing Isabella to look at her sisters. The black whip reminded her of a coiled snake slithering along behind him to exact her punishment. Standing clustered together, six of the seven Cherub angels, all novices like herself, faced the
Septuagint Council
.

“Leave them. This is my crime.” Isabella’s fear for her sisters caused her courage to slip. The guilt that she had been the one to set this drama into motion weighed heavily on her. She didn’t bother speaking in the formal tongue of
scripture
,
and went straight to pleb. A transgression, adding to her list of Cherub faults that made her different in the eyes of the Council. Her voice, steady, pleased her. Everything else about what had happened to her and the fellow Cherubs who had followed her movement of independence left bile in her throat.
I beg of thee: spare them.

“Judgment has been written. Disobeying Cherub law merits penance. Disobeying the Mistress, who sits on the right hand of the Almighty, merits exile. You are being sentenced.”

Isabella caught the holy glow from the polished Kita—the sword ordained to extract punishment. Cold sweat broke out everywhere, and her eyes widened as she choked on the acrid taste of fear, knowing it showed plainly on her face.

Raphael moved the sword in a fast arc. Isabella caught the reflected horror mirrored on her sisters’ faces. The sword had only been used one other time. Isabella did not want to be the second.

“It is too late for thee, Isabella. Thy Mistress did grant a small reprieve as she will bless you an audience. Bow thy head to acknowledge thanks.”

Isabella did so swiftly, not that her body was capable of much else. She had been ceremoniously draped in the starchy white robe Cherubs wore while undergoing penance but that robe was now shredded from the whip. Her shoulders hunched, and for once Isabella kept her head and eyes downcast as was befitting someone of her age when brought before the powerful Council.

Isabella didn’t see the Kita arch down to sever her wing. Instead she felt the hot loss of her appendage as the nerve roots were hacked through. Soaring soul pain flew like a high, off-pitched note through her body. Frozen with the lash of excruciating awareness, she crumpled forward, falling with her arms outstretched as her back bent demonically upward, attempting to escape what came next. Raphael grasped her by the neck. He forced her head down with the sole of his foot to anchor her shuddering body firmly in place.

Isabella screamed until her voice no longer worked.
I have been thrown into the pits of Hell.

Golden rivers of her blood, oozed around her shaking body. The sticky substance smelled of dewy, blooming flowers, and the liquid soaked itself into her gown.

When each of Isabella’s sisters were forced to kneel next to her, Isabella felt her heartbeat triple. She never expected this. A reprimand, yes. But this, it was too much. This was all her fault. Her obsession with the Almighty’s children had caused her fall. Her fascination with their culture, their women’s independence, and sense of freewill had been a seed fermenting in her, creating a longing for more than a Cherub life. Worse, she had led a crusade to entice her fellow sisters to join her in arms when the consequences had been clearly outlined. A Cherub’s duty is one of service to a Seraphim and nothing more. It had been the
nothing more
that angered Isabella. Knowing they would all pay the price for her desire for freedom sat like a fiery cross in her heart.

No One Needs to Know by Kevin O'Brien
The Legend That Was Earth by James P. Hogan
Conall: The 93rd Highlanders, Book Two by Samantha Kane
One More Time by RB Hilliard
Besotted by le Carre, Georgia
Swords Over Fireshore by Pati Nagle
The Phoenix Rising by Richard L. Sanders
Dissent by Gadziala, Jessica
Moonlight on Monterey Bay by Sally Goldenbaum
A Small Price to Pay for Birdsong by K J Parker
Our partner