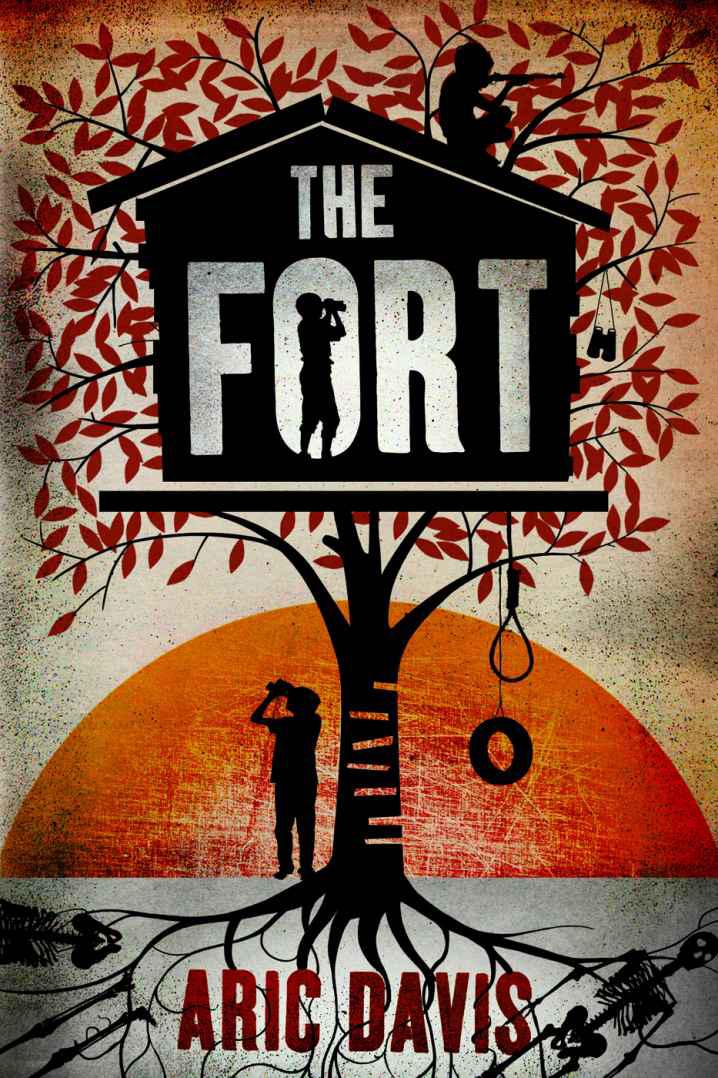 Text copyright © 2013 Aric Davis
All rights reserved.
No part of this book may be reproduced, or stored in a retrieval system, or transmitted in any form or by any means, electronic, mechanical, photocopying, recording, or otherwise, without express written permission of the publisher.

The fort was made out of scrap wood that had been harvested from Stan Benchley’s old deck by his son, Tim, after the deck had been torn down to be replaced by a patio. Tammy Benchley, Tim’s mother and Stan’s wife, had decided in what Stan decided mid-project was a fit of madness that her husband could install a patio without professional help. Stan, a teacher by trade and a man who very much valued his summer vacations, found the task to be much harder than his wife had told him it would be. The weather was hot as well, and it quickly became clear to Stan that he would be suffering in the heat of the sun for nearly the entire summer, digging out the earth, replacing it with pea gravel, and slowly leveling the stone patio pavers. By contrast, Tim and his friends Scott and Luke had their project finished much faster.

The fort was roughly twenty feet off the floor of what the boys thought of as the forest, and what most adults in the area thought of as the “eyesore.” The base of the fort was made by attaching scrapped four-by-fours to three trimmed pine trees growing within a few feet of each other. The boys were able to place these boards by building ladders into the trees using pieces of cut-up two-by-fours, also scrapped, of course. Using the four-by-fours
as their attachment point, the boys slowly made the floor of the fort out of more scrap two-by-fours, measuring, cutting, and then attaching each floorboard to the tops of the four-by-fours.

The first of the three trees was the thickest, and rather than build the fort over the base of a difficult-to-create A-shape, the boys used this larger tree to span as near as possible to the width of the other two. This early step in engineering, suggested by Tim’s dad, made the shape of the fort’s floor closer to a trapezoid than a square, and helped utilize both the strengths and the positions of the three trees to maximum advantage.

The walls of the fort had been kludged together from a mixture of four-by-fours and a forgotten stack of treated plywood that had been left to rot after a project from another summer, a period Stan Benchley still referred to as the Year of the Shed. The plywood had windows sawed into it at heights appropriate for the boys to look through, and allowed incredible sight lines into the rarely trespassed patch of trees.

When it was finished on June 29, 1987, the fort’s floor was eight feet by ten feet, give or take an inch or two. Three separate ladders led up to it, one up each tree, and walls a foot taller than the tallest boy—Scott, five feet, five inches—stood to protect them. Windows with crude shutters had been cut into the walls, and a roof was over their heads to protect them from the elements. The roof and walls were afterthoughts, but it was hard to tell, due to the unlikely but really quite skilled construction work done by the three boys.

At the point of the fort’s completion, summer break was only a month old. The Detroit Tigers were finally gaining ground in the standings after another shaky start, the Red Wings were awful as usual, but Steve Yzerman was starting to become a presence on the ice. The Pistons had done better, only to be eliminated in the playoffs by the Boston Celtics, and the Lions’ season wasn’t being mentioned by anyone but the most die-hard fans. Not that the boys cared about much of that, of course. Summer felt like a
living, breathing thing, especially only a third of the way through. It was something to be respected and enjoyed, before its evil sisters, fall and school, came back to haunt them.

On this Monday afternoon, Scott knelt in the fort, controlling his cheek weld on the rifle the way Luke had assured him snipers in Vietnam did. During the last weeks of school, Luke had read a book about Carlos Hathcock, legendary sniper of the Vietnam conflict, and Vietnam had been the game ever since, especially since the fort was completed. Next to Tim, Luke held a Daisy air rifle that had been pumped to maximum capacity, not quite powerful enough to break skin, but enough to hurt if one were shot with it. On the other side of Tim was Scott, currently aiming out the window. The rifle’s stock was stuffed into his shoulder, and his nontrigger hand was across his chest and supporting the stock from underneath, the way Scott had seen his stepdad do with his deer rifle.

“Negative,” said Scott. “Still scanning the area for other VC.” Scott was scanning for North Vietnamese soldiers in black pajamas, but all he was really doing was moving the barrel of the rifle in every direction that kept it from pointing at the target the boys had borrowed from Scott’s stepfather’s range bag.

“You see any?” Luke asked in a serious voice, and Tim responded in kind.

“Negative on that, Command. Aside from our target, the area appears clear of VC,” Scott said in a slow whisper. “I’m going to take the shot.”

“Steady on that rifle, Staff Sergeant,” said Tim. “The President wants that man dead.” Scott gave Tim a look, and Tim shrugged back at him. Finally, Scott laid the front blade of the sight on top of the center of the bull’s-eye, aligning it between the blades of the rear sight. He was breathing even more slowly now, just as his dad and Hathcock, the sniper from the book, had agreed was
important when shooting. He slowly eased back the trigger, making sure not to jerk it, and the rifle fired.

Scott and Luke dove to the floor of the fort while Tim tried to get the binoculars to focus on the target. Finally, Tim joined them on the floor. “These binoculars still suck. We’re going to have to go down there to see if you got a kill.”

All three boys shouldered air rifles before descending down the same ladder, one after the other. After all, there could still be VC in the area, regardless of reports. They walked silently to the target, and when they got there, Scott spit in disgust.

“Another miss?” Luke said. “Are we really going to do this all day? We should all get to shoot a couple times and then go look.”

“Won’t work,” said Scott. “We won’t know who shot what. I risked getting in a lot of trouble by taking that target, and we’re not going to waste it like a bunch of stupid babies.” He looked at his friends, first Tim, and then Luke, to make sure they were taking him seriously. “Besides, half the fun is in pretending that we’re really snipers. It wouldn’t be as cool if we shot it a few hundred times. That would be like, World War Two machine gunners, or something. We’re playing sniper.”

“You’re right, dude,” said Luke. “Sorry. But last time I checked, only queers were last ones back to the fort.” He said it as he took off at a gallop, his air rifle bouncing on his back. His friends bounded after him, all of them laughing and the forest vacating life around them as they crashed through the brush, quite unlike the men they had been pretending to be.

Tim emerged from the woods into his backyard, a ten-minute walk from the branching of trails that led to the fort and the boys’ three homes. His dad was sitting on a folding chair, sitting in front of the still-very-much-in-progress patio, and nursing a beer that was sweating condensation faster than it was being drunk. There was an empty folding seat next to his father, and Tim plopped into it, the late-afternoon sun over the peak of the house instantly beginning to roast his face. Tim moved the chair forward a foot and slouched down.
Problem solved.

“Your mother means to kill me,” said Stan. “Or at least wants me to suffer. I’m not sure yet which. It may be both. Has she told you who she plans to marry when the insurance money runs out?”

“Not yet, Dad. Is it that hard? ’Cause it looks super easy.”

“Oh, fruit of my loins, you are beyond lucky that I recall and respect the sanctity of a boy’s summer vacation. By all rights, you should have a transfer shovel in your massively blistered hands right now, and you should be moving that enormous pile of rocks in the driveway into this hole. We may avoid church, son, but you should thank God just in case. Trust me. You are very lucky.”

“Becca and Mom are currently discussing terms of war.” Becca was fifteen, and things had been moving toward a serious conflict. Tim wasn’t sure exactly why she and his mom hadn’t been getting along, only that he didn’t expect them to start getting along anytime soon, and he figured boys were at least part of the problem. “And because of that, us menfolk are much better off out here. You can either move rocks or compliment my ability to drink a beer. Choose wisely.”

Tim leaned back in the chair, enjoying the warmth, but even more so, the freedom. As much as his dad griped about the patio, Tim had a feeling his old man was enjoying the freedom from work as well, even if he had ended up with a different sort of work.

“So what were you and your buddies up to today?”

“Shooting at a target with our air rifles.”

“Yes,” Stan said, then took a drink of beer. “Which is fine with me, by the way. Just don’t let Mom catch wind of it. You know how she feels about that.” Tammy’s older brother, Mike, had been killed in Khe Sanh in 1968, when she was sixteen. There was a photograph of a smiling Uncle Mike that hung on the mantel. In the picture he was drinking a Budweiser and leaning on a Huey helicopter. Looking at the picture, Tim had wondered on more than one occasion if there wasn’t some version of Uncle Mike in some parallel universe who hadn’t gotten killed.

Beauty Tempts the Beast by Leslie Dicken
Charlotte Markham and the House of Darkling by Michael Boccacino
The Dragon's Prize by Sophie Park
Muerto hasta el anochecer by Charlaine Harris
Killing Ground by Douglas Reeman
If I Can't Have You by Hammond, Lauren
The Small Boat of Great Sorrows by Dan Fesperman
Boss (Chianti Kisses #2) by Tara Oakes
This Is Where We Live by Janelle Brown
Bride & Groom by Conant, Susan
Our partner