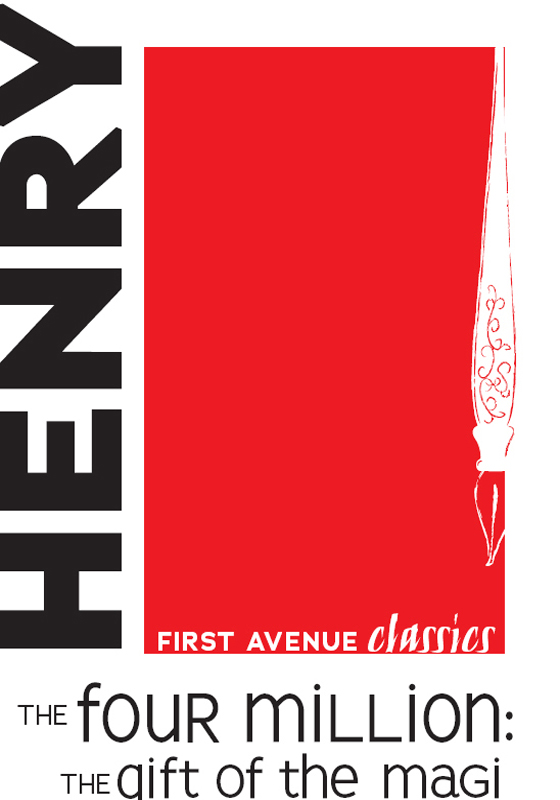 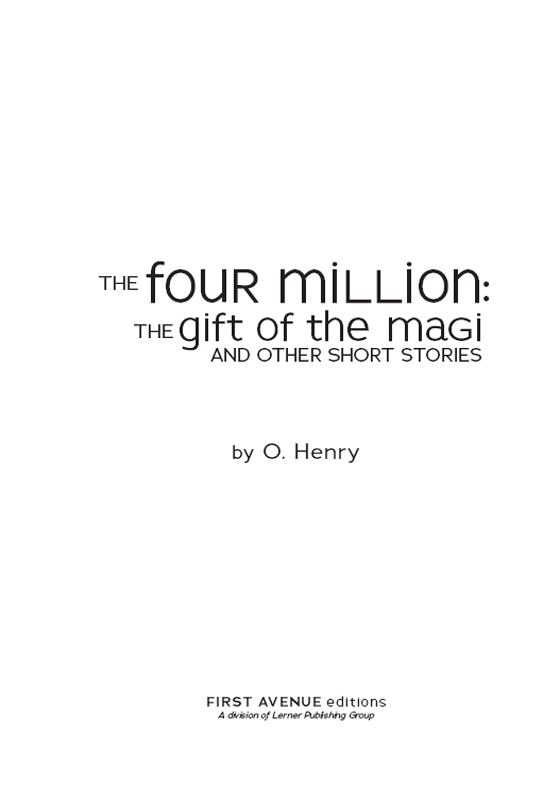 O. Henry's empathetic tales give names and faces to everyday people, bearing out his belief that everyone is worth noticing. The collection of twenty-five short stories includes one of his most famous, “The Gift of the Magi.” This is an unabridged version of the American author's short story collection, which was first published in 1906, and the text is in the public domain. This First Avenue Classicsâ ¢ version has placed the text into a new design to make this book appealing and easier to read in both digital and paperback formats. The eBook contains a hyperlinked Table of Contents for navigation. The First Avenue Classicsâ ¢ version is unabridged and has been proofed for formatting errors. Errors and alternate spellings found in the original book have not been changed.

All rights reserved. International copyright secured. No part of this book may be reproduced, stored in a retrieval system, or transmitted in any form or by any meansâelectronic, mechanical, photocopying, recording, or otherwiseâwithout the prior written permission of Lerner Publishing Group, Inc.

The Gift of the Magi

A Cosmopolite in a CafÃ©

A
Service of Love

The Coming-Out of Maggie

The Cop and the Anthem

An Adjustment of Nature

Memoirs of a Yellow Dog

The Love-Philtre of Ikey Schoenstein

Mammon and the Archer

The Caliph, Cupid and the Clock

Sisters of the Golden Circle

The Romance of a Busy Broker

The Brief DÃ©but of Tildy

Tobin and me, the two of us, went down to Coney one day, for there was four dollars between us, and Tobin had need of distractions. For there was Katie Mahorner, his sweetheart, of County Sligo, lost since she started for America three months before with two hundred dollars, her own savings, and one hundred dollars from the sale of Tobin's inherited estate, a fine cottage and pig on the Bog Shannaugh. And since the letter that Tobin got saying that she had started to come to him not a bit of news had he heard or seen of Katie Mahorner. Tobin advertised in the papers, but nothing could be found of the colleen.

So, to Coney me and Tobin went, thinking that a turn at the chutes and the smell of the popcorn might raise the heart in his bosom. But Tobin was a hardheaded man, and the sadness stuck in his skin. He ground his teeth at the crying balloons; he cursed the moving pictures; and, though he would drink whenever asked, he scorned Punch and Judy, and was for licking the tintype men as they came.

So I gets him down a side way on a board walk where the attractions were some less violent. At a little six by eight stall Tobin halts, with a more human look in his eye.

“'Tis here,” says he, “I will be diverted. I'll have the palm of me hand investigated by the wonderful palmist of the Nile,
and see if what is to be will be.”

Tobin was a believer in signs and the unnatural in nature. He possessed illegal convictions in his mind along the subjects of black cats, lucky numbers, and the weather predictions in the papers.

We went into the enchanted chicken coop, which was fixed mysterious with red cloth and pictures of hands with lines crossing 'em like a railroad centre. The sign over the door says it is Madame Zozo the Egyptian Palmist. There was a fat woman inside in a red jumper with pothooks and beasties embroidered upon it. Tobin gives her ten cents and extends one of his hands. She lifts Tobin's hand, which is own brother to the hoof of a drayhorse, and examines it to see whether 'tis a stone in the frog or a cast shoe he has come for.

“Man,” says this Madame Zozo, “the line of your fate showsâ”

“Tis not me foot at all,” says Tobin, interrupting. “Sure, 'tis no beauty, but ye hold the palm of me hand.”

“The line shows,” says the Madame, “that ye've not arrived at your time of life without bad luck. And there's more to come. The mount of Venusâor is that a stone bruise?âshows that ye've been in love. There's been trouble in your life on account of your sweetheart.”

“'Tis Katie Mahorner she has references with,” whispers Tobin to me in a loud voice to one side.

“I see,” says the palmist, “a great deal of sorrow and tribulation with one whom ye cannot forget. I see the lines of designation point to the letter K and the letter M in her name.”

“Look out,” goes on the palmist, “for a dark man and a light woman; for they'll both bring ye trouble. Ye'll make a voyage upon the water very soon, and have a financial loss. I see one line that brings good luck. There's a man coming into
your life who will fetch ye good fortune. Ye'll know him when ye see him by his crooked nose.”

“Is his name set down?” asks Tobin. “'Twill be convenient in the way of greeting when he backs up to dump off the good luck.”

“His name,” says the palmist, thoughtful looking, “is not spelled out by the lines, but they indicate 'tis a long one, and the letter âo' should be in it. There's no more to tell. Good-evening. Don't block up the door.”

“'Tis wonderful how she knows,” says Tobin as we walk to the pier.

As we squeezed through the gates a nigger man sticks his lighted segar against Tobin's ear, and there is trouble. Tobin hammers his neck, and the women squeal, and by presence of mind I drag the little man out of the way before the police comes. Tobin is always in an ugly mood when enjoying himself.

On the boat going back, when the man calls “Who wants the good-looking waiter?” Tobin tried to plead guilty, feeling the desire to blow the foam off a crock of suds, but when he felt in his pocket he found himself discharged for lack of evidence. Somebody had disturbed his change during the commotion. So we sat, dry, upon the stools, listening to the Dagoes fiddling on deck. If anything, Tobin was lower in spirits and less congenial with his misfortunes than when we started.

On a seat against the railing was a young woman dressed suitable for red automobiles, with hair the colour of an unsmoked meerschaum. In passing by, Tobin kicks her foot without intentions, and, being polite to ladies when in drink, he tries to give his hat a twist while apologising. But he knocks it off, and the wind carries it overboard.

Tobin came back and sat down, and I began to look out for him, for the man's adversities were becoming frequent. He
was apt, when pushed so close by hard luck, to kick the best dressed man he could see, and try to take command of the boat.

Presently Tobin grabs my arm and says, excited: “Jawn,” says he, “do ye know what we're doing? We're taking a voyage upon the water.”

“There now,” says I; “subdue yeself. The boat'll land in ten minutes more.”

“Look,” says he, “at the light lady upon the bench. And have ye forgotten the nigger man that burned me ear? And isn't the money I had goneâa dollar sixty-five it was?”

I thought he was no more than summing up his catastrophes so as to get violent with good excuse, as men will do, and I tried to make him understand such things was trifles.

“Listen,” says Tobin. “Ye've no ear for the gift of prophecy or the miracles of the inspired. What did the palmist lady tell ye out of me hand? 'Tis coming true before your eyes. âLook out,' says she, âfor a dark man and a light woman; they'll bring ye trouble.' Have ye forgot the nigger man, though he got some of it back from me fist? Can ye show me a lighter woman than the blonde lady that was the cause of me hat falling in the water? And where's the dollar sixty-five I had in me vest when we left the shooting gallery?”

The way Tobin put it, it did seem to corroborate the art of prediction, though it looked to me that these accidents could happen to any one at Coney without the implication of palmistry.

Tobin got up and walked around on deck, looking close at the passengers out of his little red eyes. I asked him the interpretation of his movements. Ye never know what Tobin has in his mind until he begins to carry it out.

“Ye should know,” says he, “I'm working out the salvation promised by the lines in me palm. I'm looking for the crooked-nose man that's to bring the good luck. 'Tis all that
will save us. Jawn, did ye ever see a straighter-nosed gang of hellions in the days of your life?”

'Twas the nine-thirty boat, and we landed and walked uptown through Twenty-second Street, Tobin being without his hat.

On a street corner, standing under a gas-light and looking over the elevated road at the moon, was a man. A long man he was, dressed decent, with a segar between his teeth, and I saw that his nose made two twists from bridge to end, like the wriggle of a snake. Tobin saw it at the same time, and I heard him breathe hard like a horse when you take the saddle off. He went straight up to the man, and I went with him.

“Good-night to ye,” Tobin says to the man. The man takes out his segar and passes the compliments, sociable.

“Would ye hand us your name,” asks Tobin, “and let us look at the size of it? It may be our duty to become acquainted with ye.”

“'Tis the right length,” says Tobin. “Do you spell it with an âo' anywhere down the stretch of it?”

“
Can
ye spell it with an âo'?” inquires Tobin, turning anxious.

“If your conscience,” says the man with the nose, “is indisposed toward foreign idioms ye might, to please yourself, smuggle the letter into the penultimate syllable.”

“Tis highly appreciated,” says the man, with a bow. “And now since I cannot conceive that ye would hold a spelling bee upon the street corner, will ye name some reasonable excuse for being at large?”

“By the two signs,” answers Tobin, trying to explain,
“which ye display according to the reading of the Egyptian palmist from the sole of me hand, ye've been nominated to offset with good luck the lines of trouble leading to the nigger man and the blonde lady with her feet crossed in the boat, besides the financial loss of a dollar sixty-five, all so far fulfilled according to Hoyle.”

The man stopped smoking and looked at me.

“Have ye any amendments,” he asks, “to offer to that statement, or are ye one too? I thought by the looks of ye ye might have him in charge.”

The Next Thing I Knew (Heavenly) by John Corwin
Genie and Paul by Natasha Soobramanien
Dark Journey by Stuart, Anne
The Lost Voyager: A Space Opera Novel by A. C. Hadfield
Maternity Leave by Trish Felice Cohen
Dead Sleep by Greg Iles
No More Mr. Nice Guy by Carl Weber
Dreams of the Forgotten by Lexi Ander
Undead and Underwater by MaryJanice Davidson
The Essential Guide to Gay and Lesbian Weddings by Tess Ayers, Paul Brown
Our partner