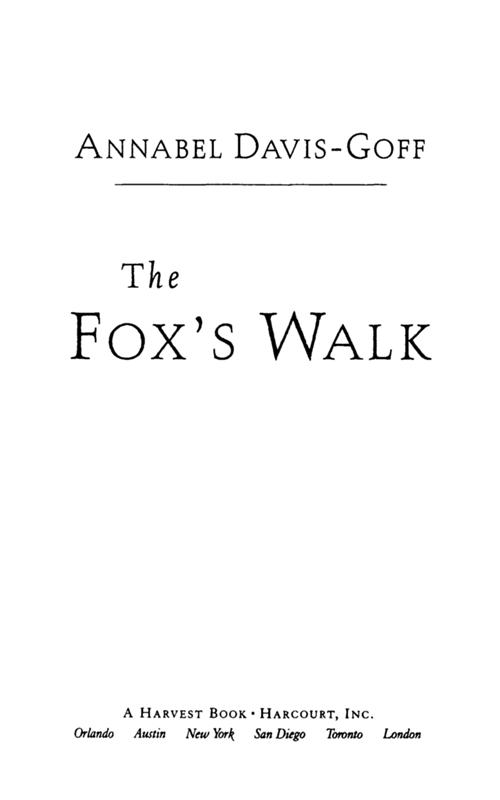 Requests for permission to make copies of any part of the work should be mailed to the following address: Permissions Department, Harcourt, Inc., 6277 Sea Harbor Drive, Orlando, Florida 32887-6777.

My mother spent part of her childhood at Ballydavid with her grandmother and great-aunt. When she died, she left an unfinished memoir that included an account of life at Ballydavid and a description of the lives of some of the local Waterford families. The background of this novel and a few of the characters and houses are taken from my mothers writing and from conversations in which she would recall childhood memories of life at Ballydavid. I have on two occasions, with great pleasure, borrowed a phrase from my mothers book.

I am also indebted to David Hough at Harcourt for his tireless patience and attention to detail, and to my editor, Ann Patty, for her trust and support.

O
N A COLD DAY
in March of this year, Sir Roger Casement was reburied at Glasnevin Cemetery.

His remainsâhe'd been buried in lime almost fifty years ago; what could they now consist of?âhad been disinterred at Pentonville where he had been executed in 1916. He had lain in state at the Pro-Cathedral in Dublin before his ceremonial reburial in that part of the cemetery where patriots and heroes of the struggle for Irish independence lie. His grave is close to that of Michael Collins; the Countess Markievicz, too, is buried at Glasnevin. So is Erskine Childers.

The day on which Casement was reburied was (nature affirming the inconvenient character of the hero of the hour) not only bitterly cold but wet. Eamon de Valera, the Irish president, himself a former revolutionary, ailing, and now at the end of his long political career, ignoring his doctors advice, stood bareheaded beside the grave.

Although I now live in Sandycove near the house where Casement was born and read about the ceremony in the
Irish Times,
I waited until the end of summer to visit his grave. The Republican graves are the frequent destination of nationalist pilgrims who consider that so long as the six counties in the north of Ireland remain part of the United Kingdom the struggle for Irish freedom is not over. For them, since I am a Protestant, I am English and therefore the enemy although my family has lived in Ireland for three hundred years. I am Protestant, Anglo-Irish, and I am not the enemy.

Todayâ1965, only forty-three years since Ireland became a Free State, and sixteen since she has been a Republicâthe writing of Irish history is just emerging from the party line to become a more scholarly endeavor. Even so, the approved history books have always been studded with leaders and revolutionaries of the Anglo-Irish, Protestant, landowning classes who gave their lives in the nationalist cause. Roger Casement was one of these.

Casement's grave is marked by a slab of limestone, flat to the ground, inscribed in Irish. There is a tree beside it and the cemetery lies next to the Botanical Gardens. I think he would have been pleased. Despite a death cell letter in which he asked to be buried in the old churchyard in Murlough Bay, he might well have preferred Glasnevin; he could hardly have requested a hero's grave, and I doubt at that lonely time that he could have imagined one.

Casements is a long and bitter storyâsome of which I am about to tell. Not because I ever saw himâI was nine years old when he was hangedânor because anyone in my family had known him personallyâwhich would have been unlikely but not impossibleâbut because he, as the personification of the Anglo-Irish nationalist patriot and martyr, outraged the values of the Protestant privileged class and also confused it. The Ascendancyâthe aristocracy, landowners, and politically powerful stratum of societyâalready knew their days to be numbered. They saw Casement as a traitor, pure and simple, but they also saw the government in London, the government they thought represented them, behave in a manner not only stupid but dishonorable. That behaviorâthe stupidity and lack of honor, not the treacheryâwas one of the causes of an unpremeditated choice that changed my future and would have affected the lives of those around me had not the course of history swept away the very foundations of the way we lived. In the end, the only life I changed was my own; my choice largely invisible in that utterly altered world.

A
S IN MOST HAPPY
childhoods, my life consisted of long periods of boredom interspersed with moments of drama that did not have far-reaching consequences. The summer of my first memories I was five years old and still an only child. My mother was with me at Ballydavidâwe were visiting my grandmother and great-auntâand she must have been pregnant, carrying my brother Edward. Of her pregnancy, I remember nothing.

Instead, I remember moments of that summerâsmall scenes full of meaning that I couldn't then, with my limited vocabulary, convey to the grown-ups. I am not confident I can do so now. The largest of these fragments of memory begins on the avenue at Ballydavid. It says something about the benevolence of the Irish countryside in those days, and even more about the casual attitude toward children in my not overindulgent family, that no one noticed I had wandered away from the houseâalong the avenue almost to the wrought-iron and stone-pillared gates, on the other side of which lay the road leading south to the sea or north toward Waterford.

The entertaining of children was not, either in my family or in society at large, given the importance that it now is. There was nothing unusual about my being turned out of doors alone on a cold dark day with an airy instruction to play. The front door would then be closed, and the adult who had so instructed me would go back to sit by the drawing-room fire.

Usually I would loiter for a moment or two, hoping for a reprieve, before making the best of it. Ballydavid was not lacking in opportunities for the adventurous child I later became, but at five years old I was not tall enough to open the gates to the walled garden, nor was I encouraged by O'Neill to hang about the farmyard, under his feet or the hooves of the animals he cared for. I would be hard pressed, even now, to define in a couple of words O'Neill's exact position at Ballydavid, but all power over the farm lay in his hands, and his influence, although in a way not immediately apparent, possibly even to Grandmother, his employer, spread much farther afield. Very often Jock, the Highland collie, would be loitering around the front door, but that day he had found somewhere warmer and more cheerful to spend his afternoon. When it became clear I would have to amuse myself as best I could for the next hour or two, I wandered down the avenue with no destination in mind. And, with no particular enthusiasm, killing time until tea.

The avenue at Ballydavid curved and sloped gently downhill, disappearing around a bend where the mown-grass verges were interrupted by a clump of laurels. The house had been built on a hill overlooking the estuary of the river; the avenue, and then the road it led to, with stone bridges over streams and even a small hill on the way, gradually descended to the strand, a mere foot or two above the level of the sea at high tide; there it joined the narrow, sand-bordered road that followed the outline of the coast.

On either side, behind the neatly kept verge, were fields enclosed by iron railings. Only the tennis court in front of the house was not part of the small farm and garden that supplied most of the household needs. O'Neill and the two men who worked under his supervision maintained the avenue, raking the thin gravel and removing any weed that tried to take root in the stony earth. Although there was very little motorized trafficâthe Sunbeam might travel up and down the avenue once or twice a week if Grandmother decided to call on her neighbors, or if the occasional visitor, reversing the process, called at Ballydavidâtwo worn, shallow parallel furrows lay on either side of the higher central ridge. The donkey dragged the water cart, full and heavy, up to the house every day; the wheels of the cart were metal and each day they wore a little deeper into the ground.

It was a gray dull afternoon at Ballydavid, but the sun lit the water of the estuary and as far out into the ocean as my eye could see. When I reached the bend in the avenue, I hesitated and glanced back at the house to see if anyone was watching me. But the house was closed and still, a column of gray smoke rising into the windless air from the fireplace in the library.

There was no explicit rule about being out of sight of the house, but my sense was that I was being slightly disobedient. And disobedient without any immediate benefit from my daring. I paused, considering a return to loiter outside the drawing-room window, hoping someone would take pity on me, when there was a rustling in some dry leaves under the laurels. Oonagh, my Grandmother's brindle cat, who had been prowling in the undergrowth, sauntered out. Normally, indoors, she ignored me, allowing herself to be stroked but, like most cats, not meeting my eye or quite acknowledging my presence. Now, however, she arched her back, stretched, and inclined her head toward me. I was suddenly aware of her feline grace and the shades of gray in the striped markings of her coat. It was, I suppose, the moment when I became aware of beauty; until then I had taken pleasure in the appearance of certain thingsâmy mother when she came to kiss me goodnight, my first sight
of
the house as we turned the bend in the avenue, the garden in the blaze of midsummer gloryâbut implicit in these pleasures was their connection to me. Oonagh lying, as she now was, on the loose sandy soil at the edge of the avenue was beautiful in herself. Beautyâand, as I now understood, Oonaghâexisted without me as a witness.

Naturally I lacked the ability to express this idea. Not only to communicate what I had discovered to someone else, but even the vocabulary to think it clearly. But I didn't consider that and, with one more glance at Oonagh, now scratching herself, I turned and trotted up the avenue toward the house. Instinctively avoiding the front doorâknocking at it with my knuckles since I wasn't tall enough to reach the door knocker, waiting for a grown-up, and formulating an explanation for the necessity of coming indoors immediatelyâI made for the off-limits, but more accessible, kitchen door.