The Fragrance of Geraniums (A Time of Grace Book 1) 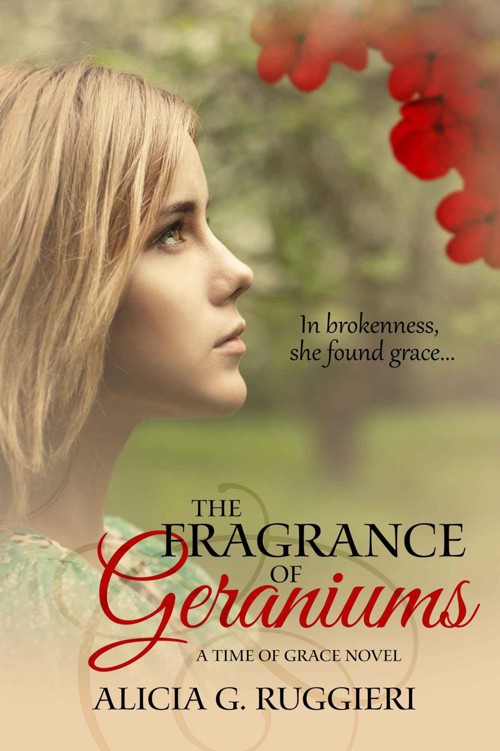 THE
FRAGRANCE OF GERANIUMS

A Time of Grace
Book One
By Alicia G. Ruggieri

For
sales and book release news,

Copyright © by 2014 Alicia G. Ruggieri
All rights reserved. No part of this publication may be reproduced in
any form without written permission from the author, except for brief quotes
used for review purposes.
Cover design by Rachel Rossano
http://www.rossanodesigns.weebly.com
All Scripture quotations are taken from the King James Version.
This is a work of fiction. While every effort has been made to ensure
general historical authenticity, all names, incidents, events, and characters
should not be construed as real.

A Time of Grace trilogy:

The Fragrance
of Geraniums

All Our Empty
Places

The House of
Mercy
(stand-alone novel)

The Mystery of
the Missing Cufflinks

For my nana,
with much love

S
he tucked a
piece of gold behind her ear, nervously twisting the whisper-thin strands from
the root to the tip. Her hands – blue veins rivering through the translucent
flesh – shook so badly. She held them out from her body, willing them to stop
trembling, entreating, pleading with them. But they wouldn’t stop shaking, acting
as independent entities, outside of Grace’s control.

Desperate now,
she clasped them together tighter than the knot that tethered the family cow to
its post in the barn. Her knuckles turned white from the pressure. The blood began
to hammer through her chest, and she tried to remind herself to breathe…

But breathing
was the last thing she really was worried about at the moment.

It’s now or
never, Grace
,
she reminded herself. She tasted blood and realized that she’d clenched her jaw
so hard that she’d bit the inside of her mouth without meaning to. Hastily, she
ran her tongue over her teeth, just in case.

The auditorium had
emptied of other students, like a lunchbox after noon. Its vast ceiling domed
over the rows and rows of seats, their wood polished by so many years of
parents and students sliding around on the surfaces.
In Memory of Pauline Durferts:
1912
proclaimed the gold plaque above the stage’s proscenium arch. Grace couldn’t
see it in the dim light – Mr. Kinner only had a lamp on now – but she’d read it
every time there had been a school assembly last year.

What would it be
like,
Grace often had wondered,
to have a school auditorium named in your honor?
She knew that she would probably never experience that, but wasn’t that what
secret dreams were for? Grace lived in awe of Pauline Durferts who had the
auditorium named after her. Though she wished poor deceased Pauline might have
had a more elegant name. Durferts Memorial Auditorium didn’t swing off the
tongue very prettily… nor did it look so great on the playbills. Grace
shrugged.
I suppose, if you have the money to give an auditorium to the high
school, it doesn’t matter what your last name sounds like.

She moved down
the aisle, silently making her way up to Mr. Kinner. Beneath her blue cardigan,
worn so threadbare that she could see her blouse through it in the light, Grace
felt her heart clatter loudly. For a moment, she thought that the teacher might
hear it. But Mr. Kinner sat with his head turned away from her, seemingly
oblivious to Grace’s obnoxious heartbeats as she approached him.

Flop.
Grace froze in
the aisle. Her eyes darted toward Mr. Kinner. He hadn’t heard; his head still
bent over his papers, the piano lamp sending up a glow, illuminating the man
like a candle in the darkness. Relieved, Grace crouched down to examine her
shoe.

Where’s that
elastic?
Grace gritted her teeth and felt about in the darkness. Her fingers came into
contact with several sticky substances on the worn floor, including a chunk of
old bubblegum. She bit back her disgust and kept inching her way around in
circles.
Where is that elastic?
Finally, Grace’s fingers touched the
rubbery strand. She gave a sigh of relief and scooped it up.

But the elastic
band had broken. Not merely fallen off, but totally snapped from where she’d put
it to hold her flopping sole on - and to take away some of the disgrace her
shoes brought her. The hollow agony of her situation nibbled away at Grace’s
shaky confidence. She couldn’t face Mr. Kinner with such an obviously-broken
shoe. She couldn’t stand to see the derision or, worse, pity smooth over his
handsome college-graduate features as he took in not only her dingy plaid
skirt, stockingless legs, and scrappy cardigan but also her flopping shoes. As
she’d dressed this morning, she’d hoped against hope that the rubber band might
mask the fact that her footwear was so… used up. But it hadn’t worked after
all.

In the dark,
cold auditorium, Grace let one tear press its way past her iron reserve. Then she
gathered up her broken dreams, folded them neatly in the drawers of her memory,
and turned the key. She silently rose to her feet and turned to leave the
assembly room by the same door through which she’d entered.

Flop. Flop.
Grace froze
again. Her shoe was giving her away! Perhaps Mr. Kinner hadn’t heard. Perhaps
he had immersed himself too entirely in his work to pay any mind to some
miscellaneous
flop
…

“Is someone
here?” The deep voice, friendly though it was, made Grace nearly choke. She
heard the creak of the piano bench and knew that Mr. Kinner had twisted around
to look out into the auditorium’s blackness. “Hello?”

Grace forced
herself to turn. She had thought that her nerves were bad before she’d broken
the shoe’s rubber band. Now she thought she might really, truly faint. “It’s
just me, sir,” she squeezed out. Her hands went numb. “But I’m going now.”

She turned and
made it almost to the heavy double exit doors before Mr. Kinner’s voice rang
out again, cheerfully asking about the shocking thing Grace had actually come
here to do:

She swallowed
and faced him again. My, but the room seemed to have grown every minute she’d
been there. She opened her mouth but not a syllable could find its way to her
dry tongue, past her stiff teeth. There was nothing for it. She moved down the
aisle clumsily, trying to prevent the flop-flopping of her shoe. When she
finally reached the piano, Mr. Kinner sat sifting through the stack of papers
before him. He smiled up at her. “Grace Picoletti, right?” She nodded and
tasted blood in her mouth again. Consciously, she forced her teeth to relax
their grip on the inside of her cheek.

“I have the
sign-up forms here. Band? No, you don’t play an instrument, do you? Theatre?”

He looked up at Grace,
who shook her head violently, drawing a smile from him again. “No? What, then?”

Grace swallowed
down the lump that felt like cancer in her throat. “Chorus,” she managed to
breathe out finally, but Mr. Kinner just looked confused.

He hadn’t heard.
She would have to try again. “Chorus,” she forced her voice box to grind out. There,
it was done. She felt the sweat cool on her forehead and looked numbly down at
her defunct saddle shoes.

Startled, Grace
gaped up at him. What did he mean? She had no idea of singing a
part
;
she only wanted to be in the chorus, standing as far to the back row as
possible. “I… I don’t know,” she finally stuttered, sure that she looked as
foolish as she felt.

Mr. Kinner
smiled like he’d been eating molasses cookies, and Grace – in the midst of
feeling embarrassed and awkward – found her heart skipping beats. He flipped
through the music piled on the piano, selected a single sheet, and set it
before him. “Well,” he said, eyes on Grace, “do you know
America the
Beautiful
?”

Grace nodded.
Everyone knew that.

“How about if I
play it, and you try to sing along? Just so we can see what your range is.” He
poised his long fingers expertly over the ivory keys and looked up at her,
waiting for her answer.

Grace froze.
Sing? In front of Mr. Kinner? Alone, without any other voices to drown hers
out?

“Here, I’ll get
you started.” Mr. Kinner tapped his foot a few times and his fingers began to
run lightly over the keys, with the same kind of joy she saw her Mama feel
when…

But now he was
singing in that lovely caramel voice, and he expected her to follow suit! She
opened her thin lips, but the notes would not emerge. Mr. Kinner looked over at
her encouragingly after the first verse, and Grace tried valiantly once more.

This time, she
managed a half-whisper, half-croak for the first few words. Mr. Kinner smiled –
Was he making sport or did he like how she sang? Grace tried a few more lines,
and Mr. Kinner’s lips spread into a wide half-moon as he dropped his hands from
the piano and onto his knees. “That was excellent, Grace!” he exclaimed before
turning back to the piano, his shining eyes reflecting in the instrument’s
well-polished surface. Grace turned the color of wild strawberries, confused at
the mixture of embarrassment and overpowering pleasure she felt at his
compliments.

“I think I’ll
start you on soprano and go from there. Practice is every Friday after school.”
Mr. Kinner glanced at his pocket-watch, and the bench squeaked as he rose to
his feet with a smile. “I’ve got to get going now, but you just get this
permission slip signed by your parents.” He handed her a sheet of mimeographed
paper from one of the piles on top of the upright.

Still returning
to earth, Grace nearly dropped the permission slip. She clutched at it with her
sweaty fingertips. “Thank you,” she breathed.

“You’re
welcome,” he returned, grabbing his briefcase from beneath the piano. He
clicked off the piano light, and darkness settled into the room, leaving only
the light from the partially-open door. “Careful as you exit,” he cautioned.

Grace nodded
mutely, backing up, holding onto the permission slip for dear life, not paying
mind to the flop of her shoe. And of course, that did it. With the sickening
knowledge that she was too far gone to do anything about it, Grace stumbled
backward in the aisle, clutching helplessly at the empty air. She landed flat
on her back, gasping for breath, staring up at the far-off ceiling, desperately
pulling her pleated skirt down from where it bunched at her waist.

Before she could
regain any composure, though, Mr. Kinner knelt at her side, concern written
over his smoothly-shaven face. “Whoa, there. Are you alright?” he asked, hand
to her shoulder.

Grace struggled
to sit up, and he helped her, holding her elbow gently. She nodded. “I’m… I’m…
o-okay,” she stammered and scrambled to stand, straightening her skirt and
blouse. Her cheek stung where she had hit it on one of the wooden seats, but
that was nothing –
nothing
– to the excruciating shame she felt as Mr.
Kinner’s gaze landed on her shoe. He said nothing, but she saw the surprise,
then understanding flood his eyes in the two seconds that he spent looking
downwards.

She couldn’t
bear it. Grace turned and ran. She would not wait to see the pity that surely
would spring fresh on Mr. Kinner’s countenance, just as it had emerged on every
teacher’s face for the past several years of her schooling when they began to
learn where she came from, what went into the making of a girl named Grace Picoletti.