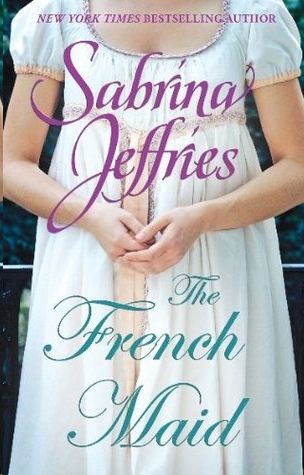 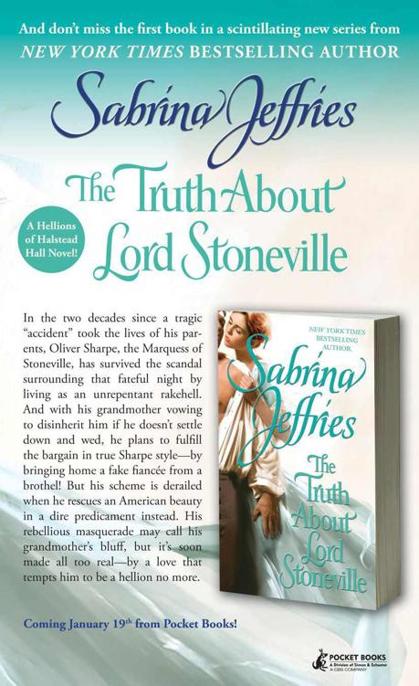 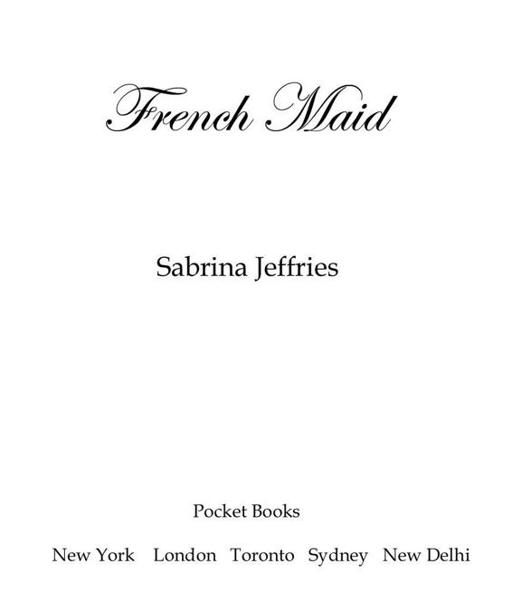 When Lady Eleanor Ruskin first agreed to marry Lord Langston, prime-minister-in-the-making, her mother warned her that Henry’s true mistress was England and always would be. Eleanor laughed and remarked, “Then he’d best dismiss his mistress, for I shall not share him.”

Now, after a year of marriage, she recognized Mama’s wisdom … and her own foolishness. A man like Henry didn’t relinquish his duty for something as trivial as a wife. The most she could hope for was to help him perform it.

A pity she was quite horribly in love with him.

Eleanor glanced over to where her handsome husband dipped his spoon into his dish of sorbet with the same economy of movement she’d admired when she first met him. Henry knew how to squeeze fifty activities out of an hour and had taught her to do the same. But despite joining him in his various public appearances, reform activities, and political meetings, she felt shut out of his life. Indeed, this was the first evening in two weeks that they’d dined together at home.

Did he remember that their wedding anniversary was two days away? Knowing Henry, she doubted it. Her birthday had come and gone with nary a notice. She’d made excuses for him, swallowed her disappointment, and marched forward like a good little soldier. Marching was becoming her most accomplished skill.

He caught her gaze on him and cast her that toothy smile that never failed to melt her, even if he did bestow it on everyone who moved into his orbit. “You did very well today at the hospital dedication. The directors all congratulated me on having found a wife with such devotion and intelligence.”

“Not to mention astounding beauty,” she murmured, remembering how drab she had appeared beside the other wives, with her unmanageable hair and her plain looks.

That remark sailed over Henry’s head. She didn’t know which was worse—that Henry didn’t notice her lack of beauty and fashion sense or that he didn’t care. After all, he hadn’t married her for her appearance but her connections, for Papa’s position as Home Secretary and Mama’s stellar blood lines.

She brightened. “You did remember!”

He looked perplexed. “Remember? What was I supposed to remember?”

An acute pain settled in her belly. She ignored it and pasted a smile on her face. “Nothing. What’s the surprise?”

“Now that your lady’s maid has gone off to get married, I’ve hired you a replacement—Babette something or other. She’s French and comes highly recommended by Lord Waveney. He said she’d surprise us with her uncanny abilities—whatever that means—but assured me she is capable. She’ll begin first thing in the morning.”

Eleanor could scarcely maintain her countenance. “You hired some Frenchwoman without consulting me? Without giving me a chance even to meet her?”

Her annoyance scarcely registered with Henry. “We’re both so busy these days that when Lord Waveney mentioned this woman I didn’t think you’d mind if I seized the opportunity.”

She bit back a retort. “No, of course not.” What Henry called seizing the opportunity, she called presumptuous interference, but she generally balked at explaining that to him. He wouldn’t listen to her anyway. Why should he? At thirty, he’d captured the respect and admiration of not only her but half the powerful men and women in England. At twenty-eight, she couldn’t even capture his attention, much less his respect and admiration.

It came as no surprise when he dropped his napkin on the table and stood. “I’ve a long proposal by Fox and Grenville to look over tonight, so I’d best get to it. You can amuse yourself, can’t you?”

Oh, yes, I’m a veritable genius at it
, she thought, but bit back the harsh words. Now he would lock himself in his study—to which no one, even she, had a key—and would work until very late. His study was his inner sanctum, and woe be unto the person who deigned to disturb him while he was in it. She’d learned early on not to do so.

“Eleanor?” he said, abruptly reminding her that he’d asked her something.

“Yes, I can amuse myself,” she responded mechanically.

He rounded the table and bent to press a quick kiss to her forehead. “Good girl. I’ll see you at breakfast.”

At breakfast. She tamped down her disappointment. Tonight was Tuesday, and Henry only came to her bed on Wednesday evenings. She watched shamefully as he strolled off with his black hair gleaming in the candlelight and his trim, muscular thighs flexing beneath tight knee breeches. If not for his crammed calendar, she’d think he really did have a mistress. He’d certainly have no trouble winning one.

But no, Mama had unfortunately been right. The only mistress Henry had was England. And England was proving to be greater competition than any female.

The next morning dawned far too bright for a woman who’d spent half the night flailing about alone in her bed. As the cock crowed, Eleanor dragged herself into a sitting position. Gone were her maiden days of late night balls followed by leisurely mornings. Now she was married to a prospective prime minister. Keeping up with Henry meant sleeping very little.

She performed her morning ablutions and exchanged her nightdress for a chemise. But when she entered her dressing room, she nearly leapt out of her skin, for there sat the French Maid whom Henry had hired and she’d forgotten about. She hadn’t heard the woman enter—had she been sleeping that soundly?

Or was the woman merely as otherworldly as she appeared? “Babette something-or-other” bore the ethereal look of a fey sprite—silver-blond hair, delicate features, a slender figure swathed in gossamer muslin. With a sinking stomach, Eleanor deduced why Henry had hired this woman without consulting her. What man wouldn’t want such a beauty around, especially when his wife was less than … attractive?

“
Bonjour
, my lady,” the angelic creature said. “My name is Babette Lebeau, and I am—”

“I know who you are,” she said curtly.

“I hope you do not mind my presumption in awaiting you here, but I did not want to be in the way elsewhere in your household.” Babette pointed to the chair in front of the mirror. “Come. Sit here and I shall dress your hair.”

The woman’s matter-of-fact pronouncement oddly eased Eleanor’s misgivings. Babette’s English was amazingly practiced, and she sounded older than she looked. Eleanor did as the woman bade, relaxing under Babette’s calming brush strokes.

“With a little effort,” Babette added, “we shall make you beautiful this morning. You would like that, no?”

“Yes.” Eleanor frowned at her own plain image and mousy brown hair in the mirror. “But such an effort requires far more time than I can spare. Even if you
could
manage it.”

Babette smiled enigmatically. “You cannot know until you try. Wait one moment, my lady,” she said and stepped out of the room.

More than one moment passed and Eleanor grew impatient. “Babette,” she called out, “I promised Henry I’d be ready to leave at nine, and it’s half past eight now.” “I wish to show you something,” Babette said from outside the dressing room. Then she entered, and Eleanor gasped.

Gone was the ethereal beauty. By changing her coiffure, adding a black shawl, and God knows what other conjuring, Babette had transformed herself into a drab charwoman. The silvery blond hair now looked washed out, the sparkling blue eyes were a dull cloudy gray, and the unsmiling countenance worsened the effect.

Babette fixed her with an earnest gaze. “You see, my lady, though it takes some work to bring out the beauty in a woman, it takes little to leach it away.” She stepped toward her. “So I ask you, shall we make the effort? Or shall you continue to throw up your hands in defeat and watch his lordship pass you by?”

She blinked at the woman’s impudence. And how had Babette guessed at her problems with Henry? The woman couldn’t know of it otherwise—she’d just arrived. And Henry would never have spoken of it, since he didn’t even realize there
were
any problems.

She shook off the unsettling sense that her new French Maid was reading her thoughts. That was absurd. Babette had merely made an assumption that happened to be true.

Still, a woman with such perception and amazing talents might succeed at improving Eleanor’s appearance where all else had failed. Allowing herself to hope, she put herself into the hands of her new French Maid.

Henry was about to walk out the door when he heard footsteps at the top of the stairs. He whirled around. “Damn it, Eleanor, I said—”

He broke off as a strange woman descended into view. No, not a strange woman, but his wife! Or at least he thought it was his wife. He’d never seen Eleanor like this, looking so out of the ordinary and yet somehow still herself. He couldn’t put his finger on what was different, but she seemed to … glow. Yes, that was it. Every part of her glowed, from her translucent skin to her rich chocolate hair. And when had her hands changed from capable to dainty? How could he have missed that little detail?

Not to mention something no gentleman should notice—a certain increase in her … er … bust. Did he imagine it or had his wife suddenly acquired an arresting pair of bosoms?

He only realized he was ogling her when a slow, sensuous smile curled up her lips. It fired his senses—and something lower, too, which astonished him.

Eleanor had never been like other women, dressing to entice him, expecting compliments on her attire, tempting him to go to extraordinary lengths to keep her happy. Eleanor was comfortable, easy to manage, and undemanding. That was one reason he’d married her—because she wouldn’t draw him from his career.

There were other reasons, too—her father’s political connections, the longstanding friendship between their two families, a certain sense that she would make him a good wife. And he did like her. But he didn’t think of Eleanor in terms of passion and longing.

No, that was not entirely true. There were some nights when he sank inside her and wished he could stay there for an eternity, wrapped in her warmth, secure in her affection. Nights when he wanted to confide in her, to probe her opinions, to share more than a bed.

She neared him now, and an exotic scent wafted under his nose, tickling his imagination. It suddenly dawned on him that tonight was Wednesday, the day he’d fallen into the habit of joining his wife in bed. The thought made him grow all the more randy.

He didn’t have to wait until tonight, did he? She was his wife. He had rights. He could carry her up to his bed, strip off her gown, and …

Miss the meeting with the Ladies’ Association for the Reformation of the Female Prisoners in Newgate, crucial to the continuation of prison reform. He reined in his wayward lust. “Good morning, my dear. I trust you slept well.”