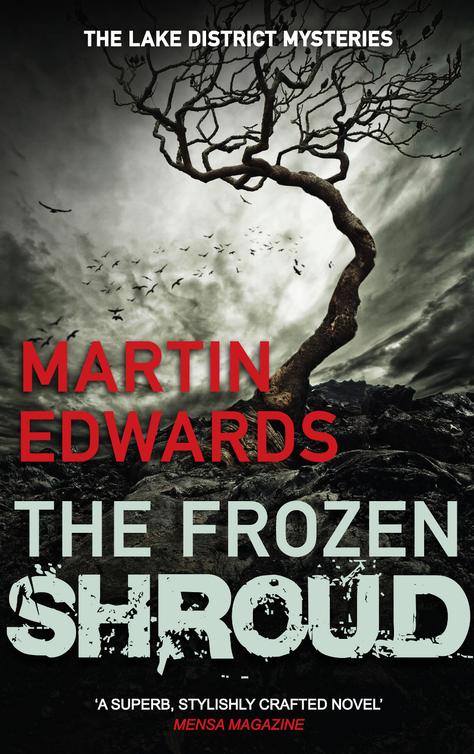 Dedicated to my cousins
Mark, Barbara, Heather and Nigel,
and to the memory of Mona,
who died while I was writing this book

FIVE YEARS AGO
CHAPTER ONE

‘Do you believe in ghosts?’ Miriam asked.

Shenagh Moss stretched in the ancient armchair. Oz Knight had once said her every movement possessed a feline grace. Shenagh had moved on – gracefully, of course – from Oz, but he wasn’t wrong. Where she came from, nobody cared about elegance, but these days, poise came as naturally as breathing. Even with no admiring man around, just an elderly housekeeper with anxious eyes.

‘Ghosts are about the past. Look forward, not back, that’s my philosophy.’

Miriam frowned at a mud-stain disfiguring the carpet she’d cleaned for so many years. Thinking about her long-dead husband? Poor, stuck-in-a-rut Miriam. Sixty was no age, but to look at her you’d think she had one foot in the grave. At least she’d made the effort to dye her hair, but why that dismal shade of mousy brown? Her beige cardigan, shapeless grey skirt and thick stockings were a
perfect match for this room, with its faded furnishings, and faint aroma of mothballs.

Yet it was never too late to change your life. Look at Francis, twelve years older than Miriam, and a martyr to osteoarthritis. From the moment they met, Shenagh knew she could put a smile back on his face. Life was short, got to grab your pleasure when you saw the chance.

‘We can’t ignore the past.’ Miriam rested a hand on Shenagh’s shoulder, gripping bone through thin silk. ‘Remember the Faceless Woman.’

‘Our very own ghost?’ Shenagh giggled. Forget the rotten weather, life was good. She wanted to cheer Miriam up. ‘Hey, after haunting Ravenbank all those years, you’d think she’d get bored. Forever prowling up and down the same lane, where’s the fun in that?’

‘You may laugh, pet, but Mrs Palladino once caught sight of the Faceless Woman. Gave her the shock of her life – and she wasn’t given to flights of fancy.’

Shenagh glanced at the framed photograph on the sideboard. With her long nose, pursed lips and pointed chin, the late Esme Palladino looked as though she disapproved of imagination, and anything else smacking of self-indulgence. You’d never guess she’d drunk herself to death.

‘Spooky!’ Shenagh pretended to shiver. ‘Makes you wonder why she carried on living in Ravenbank.’

‘Why ever not? This is the loveliest spot in the Lakes – ghost and all!’ Miriam brightened. ‘You could be so happy, pet, living here permanently. This is your home.’

Yet Miriam was also wrong. Home for Shenagh should
be Katoomba, high above her native Sydney in the Blue Mountains. Or maybe a big house at Double Bay or Vaucluse, with views of the harbour. Not a decaying mausoleum on the edge of Ullswater. She wasn’t nostalgic for Sydney’s outer western suburbs, of course. No one could be sorry to leave behind that weatherboard hovel by the train track in Jannali. But she needed room to breathe. Ravenbank was suffocating her.

There was no higher praise that Miriam could bestow. Shenagh was the daughter she’d never had, according to Francis. And for sure, she’d have been a massive improvement on Shenagh’s actual Mom, a surfie chick who gave birth at fifteen, and was run over by a truck one night when she was out of it on cocaine, looking for business on the streets of Caringbah instead of looking after her daughter.

‘You’re not fretting about that dreadful man Meek, are you, pet?’

Miriam
cared
, that was the difference. She’d never even met Craig Meek, but already she was worried sick about what he might do, now he was out of prison.

‘Hey, it’s fine. Craig isn’t any sort of ghost. Just a selfish, troublemaking bully. Nice as pie as long as everything is going his way, but when it isn’t …’

Miriam peered at her, as if straining to decipher a message written in code. ‘Promise you’ll be careful. Now he’s back in Pooley Bridge … well, it’s too close for comfort, when he has a history of violence.’

‘I’m not running scared,’ Shenagh said. ‘I wouldn’t give him the satisfaction. And that is a promise.’

The velvet curtains weren’t thick enough to deaden the lash of rain on the flagstones outside. The clock struck six, but it felt like midnight. This vast sitting room was draughty, despite the crackling fire. Shenagh reckoned the whole house needed a makeover to bring it into the twenty-first century, but she wasn’t going to hang around, waiting for it to happen. Who could blame her for counting the days until she landed back at Kingsford Smith?

Miriam tossed another log from the wicker basket onto the flames, and Shenagh reached out to warm her hands.

‘Why do you ask about ghosts?’

‘I wanted to go to a party.’ Shenagh feigned a pout. ‘Francis wouldn’t hear of it. I told him, you don’t have to believe in ghoulies, it’s only an excuse for a piss-up. But he’d rather stay at home, the lazy sod.’

‘One thing he isn’t, pet, is lazy.’ Miriam seldom ventured to contradict Shenagh, but she’d defend Francis to the death. ‘He’s absolutely tireless. That’s why he reached the top of his profession.’

‘Yeah, I hear the nurses worshipped him. No wonder he expects everyone to jump when he says jump. Sometimes he makes me feel like a stupid kid.’

Shenagh smiled. Both of them knew she was anything but stupid. Francis wouldn’t want to spend the rest of his life with an airhead, whatever she looked like.

‘He thinks the world of you, and no wonder. During that terrible time, when Esme was ill, he couldn’t have got through it without you.’

A pink tinge appeared on Miriam’s leathery cheeks. This
was another of Shenagh’s gifts, her lavishness with praise. It cost nothing to make people feel good, and sometimes they were generous in return.

‘You always say such nice things, pet, but I was only doing my job.’

‘Francis shouldn’t have stayed on in this house,’ Shenagh said. ‘Even though he doesn’t believe in ghosts any more than I do.’

‘Mr Palladino’s a man of science.’ Miriam shook her head. ‘He doesn’t believe in anything he can’t see and touch.’

Shenagh clapped her hands. ‘How’s this for an idea? We can celebrate! Commemorate the occasion. I mean, we can’t just ignore our very own legend. It wouldn’t be fair on poor old Gertrude. Let’s mark the Faceless Woman’s anniversary with champagne!’

The sitting room door creaked open, and the words died on Miriam’s tongue. The man who walked in carried a stick, and winced with every step he took. His sparse grey hair was wet, his Barbour coat dripped onto the carpet.

A voice of authority, unaccustomed to dissent. How he must have relished making the nurses swoon. He claimed he missed the world of medicine, but Shenagh suspected he missed not the patients, but the power. Even she’d been startled by his reminiscences of life and death in hospital, and a God-playing former colleague known as Morphine Morris: ‘No bed-blockers in his wards, I can tell you, not after one quick squirt of his trusty syringe!’

No wonder Francis had kept Miriam on after Esme’s liver finally gave up the unequal struggle. Miriam served the same purpose as the adoring nurses.
Yes, Mr Palladino, no, Mr Palladino, three bags full, Mr Palladino.
And it wasn’t only Francis; her son was someone else she spoilt rotten. No doubt it was the same with her husband, the late lamented Bobby. Big mistake. Let a man get his own way, and he’d walk all over you.

‘Is your back hurting? Your own silly fault, Frankie. I warned you not to overdo it.’

Her easy familiarity shocked Miriam, adding to the fun. The older woman helped Francis remove his coat, and hurried off to hang it up in the hall. He hobbled over to Shenagh’s chair, and bent to brush his lips against her hair.

‘Why are you keeping Miriam here?’ he murmured. ‘There’s a storm brewing. She needs to get back home.’

‘We were talking about the Faceless Woman.’ She kissed his cold cheek. ‘It’s my first Hallowe’en in Ravenbank, and I’ve paid no attention to the story about Gertrude Smith till now.’

Francis Palladino made the sort of scornful noise he usually reserved for people campaigning for more wind turbines in the Lake District. ‘You don’t want to bother, it’s a load of tosh.’

‘Miriam didn’t want to go until she was sure you were safe and sound.’

‘I’m not a bloody invalid.’

She ran her fingertips along his tweed-clad thigh. ‘You’ll be sacking your masseuse, then?’

As Miriam bustled back into the room, he said, ‘So you and Shenagh have been discussing our little legend?’

‘Spook night!’ Shenagh cried. ‘You know, I really ought to check out this Faceless Woman. Will I find her with a Google search? Does she have a Facebook page in her memory? Or is that a contradiction in terms, given the – uh – face shortage?’

‘It’s no joking matter, pet!’ Miriam’s eyes widened. ‘Gertrude Smith was murdered on Hallowe’en, and the person who killed her wasn’t hanged. That’s why her spirit is tormented. Justice was never done.’

Outside the house, someone hammered on the old oak front door. Miriam jumped at the very moment that Shenagh dissolved into a fit of helpless laughter.

‘You gave me the fright of my life.’ Miriam was only pretending to scold her son. In her eyes, Robin could do no wrong. ‘We were talking about the Faceless Woman.’

‘Sorry to make such a racket.’ Robin Park chortled, not looking sorry at all. ‘The doorbell needs fixing. Want me to sort it out when I get a moment, Francis? I was telling Shenagh the other day, if the gigs ever dry up, I’d make a pretty decent handyman.’

Palladino’s reply was a non-committal grunt. Robin never would get a moment. The offer was for his mother’s benefit, one more thread in the tapestry she’d woven, depicting Robin the Virtuous, a man kind and generous to a fault. Shenagh thought him lazy and self-obsessed, but she’d met fellers a hundred times worse. He was good-looking, good company, and a pretty good jazz pianist. She’d have been tempted, definitely tempted, but at the cocktail party where Oz Knight introduced them,
she also met Francis. And Francis might not be a lean hunk with startling blue eyes, but he was a civilised and childless old-school Englishman who owned a mansion. No contest.

His mother frowned. ‘It’s no joke, dear. What happened to that wretched young woman was pure wickedness. It makes my stomach heave just to think of it.’

‘Gertrude Smith never could rest in peace.’ Miriam swallowed hard. ‘On dark nights in the cottage, when Robin is away, I can’t help thinking about that poor young creature, walking down Ravenbank Lane, without a face.’

Robin put his arm around her bulky shoulders. ‘Not to worry. Nobody left alive has ever seen her ghost.’

Miriam cleared her throat. ‘Someone battered her face with a heavy stone, and kept on until all that was left was a bloody pulp. No eyes, no nose, just a mashed-up mess.’

Francis frowned, and opened his mouth to speak, but there was no stopping Miriam in full flow.

‘And that’s not all. Gertrude’s face was covered with a woollen blanket, like a shroud. The men who found her had to rip it off. The cold had frozen the shroud to her flesh.’