Read The Fruit of the Tree Online 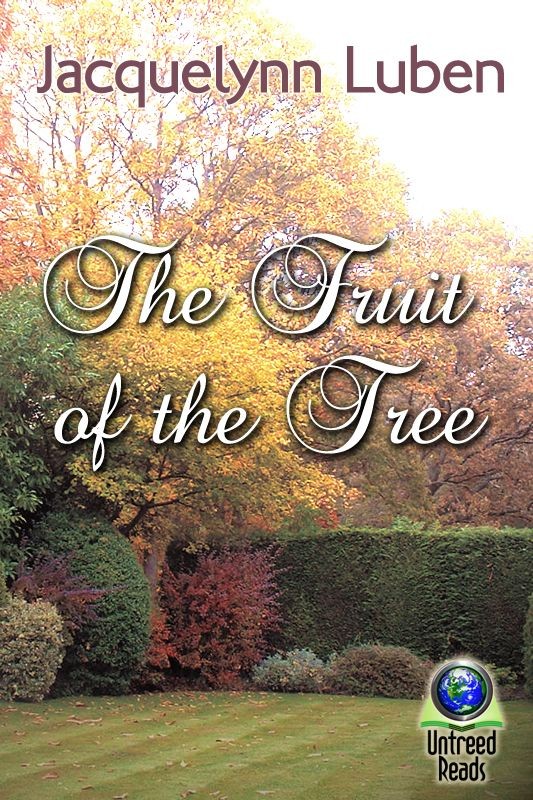 1. After the Lord Mayor’s Show

6. Out of the Frying Pan

7. No Electricity, No Heating, No Car, No Telephone, November…With Apologies to Thomas Hood

8. Let There Be Light

9. I and the Infernal Combustion Engine, etc.

14. At the First Stroke of Autumn

An Affair of the Mind

Jacquelynn Luben moved from London on her marriage in 1966, and, in secluded Surrey woodland, she and her husband built the bungalow that has been their home ever since.

After the birth of her son, she suffered two miscarriages before her daughter Amanda was born. When Amanda became a cot death victim at the age of two months, Jacquelynn tried to find out more about cot death or ‘Sudden Infant Death Syndrome’ and received support and help from The British Guild for Sudden Infant Death Study, later absorbed by The Foundation for the Study of Infant Deaths. This latter organisation was founded in 1971, the same year as Amanda’s birth and death, and the author remained in contact with them, carrying out occasional fund raising events on their behalf.

In 1972, Jacquelynn’s second daughter was born, and during the same period she started writing about her experience in the form of articles for publication and letters to other bereaved parents. In 1986, her book
Cot Deaths—Coping with Sudden Infant Death Syndrome
was published and has been helpful to parents and health professionals alike.

Since then, she has extended her writing into fiction and poetry, as well as non-fiction. She has completed a degree with Surrey University, is working on her latest novel and has published some of her short stories online.

Jacquelynn Luben’s book
The Fruit of the Tree
charts a tragic course which many of us have negotiated and wish would never have to happen to anyone else. Losing a baby and not knowing why is an experience shared by so many of us, and Jacquelynn has had more than her fair share of sadness and difficulties, which she graphically describes in this book.

However, as she demonstrates, the human being is capable of immense strength to bounce back time and time again in the face of despair. This book is a tribute to her lost baby, and our crusade to find out why.

The Foundation for the Study of Infant Deaths

To my friend and sister, Ruth,

whom I shall never forget

Blessed art Thou, oh Lord our God, King of the Universe, Who createst the fruit of the tree.

1. After the Lord Mayor’s Show

I walked carefully down the stairs and into the narrow hall, past the locked door that led into the shop my mother had run for many years.

I opened the heavy front door. Outside, the main road was grey with rain and I hesitated in the doorway.

I saw a middle-aged Jewish couple walking along the pavement. The woman glanced in my direction, then stopped short.

The bridal car awaited me. A new life awaited me. There was to be an elaborate wedding, a honeymoon in Spain and a move fifty miles from London to the Surrey town of Guildford.

I did not know, at that moment, that my simple ambitions of being a conventional wife and mother would not easily be achieved. That there would be times when my life would be far from conventional, and that my desire to produce a family would be frustrated by two miscarriages and the tragedy of a dead child.

I did not know then, that my emotions would reach the depths and the heights in the course of the next few years and would eventually be expressed in the form of a book—written so that others might understand my experience.

As I stood framed in the doorway, on that September Sunday, traditionally clad in white satin, as so many brides before me, I was thankfully unaware of what lay ahead.

My parents were upstairs, still presumably directing operations. The middle-aged lady, eager and excited, rushed forward with her umbrella to escort me to the car.

My parents got into the car, and we sped away to the Synagogue.

The ceremony conducted in Hebrew, the partaking by my new husband, Michael, and me of a sip of wine from a common goblet and the breaking of a glass underfoot were followed by a wedding party which was fairly typical of many Jewish weddings of that time. There was an emphasis on food and drink, mainly the former, exemplified by the menu of several courses, and punctuated by a sorbet in the middle to enable guests to eat the latter part of the meal with renewed appetite.

Traditional toasts were drunk to one and all, and lengthy orations, rightfully in praise of my parents, delivered.

Music and dancing were followed by tea and pastries.

It was an extravagant affair, which I would not have wished to change, although I cannot claim that the feeling was shared by Michael. In fact, in subsequent years, he always referred to the occasion as ‘your wedding.’ Perhaps I should not have allowed my parents to waste their money on such an unproductive function. How much more sensible it would have been to invest it in the furnishing of our future home.

But every ship has the right to a bottle of champagne on its launching and I wanted to go out in style too!

‘Look after the luxuries’, I told my friend, Ruth, who held the opposite view, ‘and the necessities will look after themselves.’

Delaying the commencement of reality still further, Michael and I flew off to Torremolinos, but like many young couples, we found the honeymoon an overrated experience, and since we and most people in our hotel were soon incapacitated by a virulent Spanish germ, we were not left with many romantic memories of the holiday.

Michael and I had known each other for eighteen months. We had met through a Jewish social group, and, although I would not go so far as to claim it was love at first site, there was an immediate feeling of recognition of each other. I don’t know what he saw in me, other than the carefully made up face and slim figure, for I had little else to offer a potential husband at that time. As he was fond of telling me in later years, an Eskimo simply wouldn’t have taken on a wife with my lack of domestic skills and my abhorrence of sewing, and a secretarial training and several O-Levels simply would not have substituted. However, I, in my first look at him, saw strength, kindness, and good humour in his eyes. I had in the past had a tendency to be attracted to rogues—(haven’t we all?)—but here, for the first time, I thought I saw the father of my children. We gravitated to each other by common consent, and our engagement occurred a year later following a courtship that was not without its ups and downs. He was unpunctual and forgetful. I was self-centred and pretty spoiled, as well as being totally undomesticated. By the time we got married, he was nearly thirty and I was five years younger. We had already developed some sharp corners that required rubbing off.

As I walked down the aisle on my father’s arm, I nearly stopped in my tracks and returned whence I came. Could this be the biggest mistake of my life? But the music played on and my feet carried on walking into marriage.

Married life began in earnest with our arrival at our house in Guildford—a two-bedroomed semi, with builder’s yard attached, from where Michael ran a plumbing and heating business. This was ostensibly a temporary measure, since Michael had assured me that within about three months we would be able to move into our dream house, in a delightful setting, tucked away on a country lane.

My first sight of our future home had occurred one evening, shortly after we had become engaged, when Michael had driven me into a village a few miles from the office/builders’ yard, and, in almost total darkness, had shown me a field where weeds and grass were practically waist high. He had been offered this secluded plot, with planning permission for a bungalow, by an architect-contact, and considered we were extremely lucky to have the opportunity to buy it.

There were modern estates springing up all over the country with new homes suitable for young marrieds. But Michael was not prepared to consider a home that came ready to use without any additional work required. Part of the charm of buying a new property was the prospect of knocking it about a bit. He had, for example, also expressed an interest in buying a mill, and had some fancy ideas about water running through the living room, contained in some sort of glass aqueduct. I was decidedly unenthusiastic about this and settled for the lesser of the two evils—a modern bungalow—in the back of beyond! So I gave the final assent, added most of my savings to his capital, and in no time, the legal wheels were grinding and the unkempt piece of land was ours.

Very few people realised how much I dreaded life in what seemed to me to be the heart of the country. I had after all lived for years in a main road in London, with the comforting noise of several buses stopping outside my front door, and all my working life had been spent in the West End, from Haymarket to Mayfair, where the nearest thing to countryside was Green Park.

Nevertheless, I tried to show enthusiasm for our potential home; many weekends during our engagement were spent at our wilderness, and a large mechanical digger was purchased in order to clear the land, the site of an old orchard.

The apple trees were all blighted, so we had to be ruthless. As a learner driver with two failed tests behind me, I might not have seemed the obvious choice of driver of the yellow monster, but I would probably have been even less use in dealing with the sprouting growth of all shapes and sizes. Each apple tree was attached by Michael to the digger, after which I, sitting high above him in my cab, operated the controls and yanked the tree, roots and all, from the earth like a stopper from a bottle. With much more effort, and reluctantly, an oak and a horse chestnut tree were removed too, and a mammoth bonfire was often the highlight of the day’s efforts.

Fortunately, because I came to love the appearance of those huge mature trees, we were able to save three more oaks and two acacias, by moving the proposed position of the house.

Not one to miss an opportunity, Michael also employed the digger to excavate an enormous hole at the end of the garden, in order that we could one day build a swimming pool.