The Gates of Hell (Matt Drake 3) 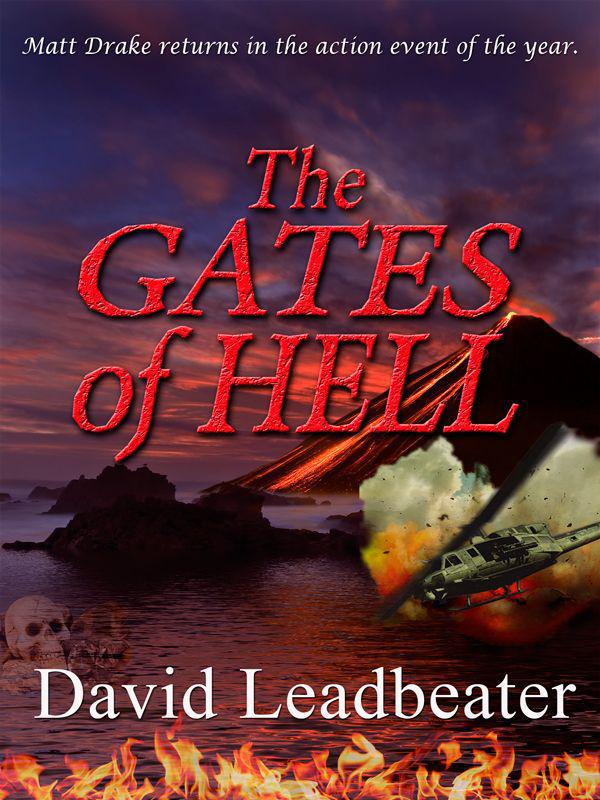 Other books by David Leadbeater:

Walking with Ghosts
(a short story)

All helpful, genuine comments are welcome. I would love to hear from you.

All rights reserved. No part of this publication may be reproduced, distributed, or transmitted in any form or by any means, including photocopying, recording, or other electronic or mechanical methods, without the prior written permission of the publisher/author except in the case of brief quotations embodied in critical reviews and certain other non-commercial uses permitted by copyright law.

All characters in this book are fictitious, and any resemblance to actual persons living or dead is purely coincidental.

First of all, I would like to say a huge thank you by dedicating this book to all the wonderful readers who have stayed with me to this point, and to everyone who has emailed me and contacted me on Twitter and Facebook expressing your fantastic support. It is hugely appreciated and is the major reason I carry on writing.

At this stage in proceedings, I thought a few lines of explanation might be helpful.

The Matt Drake series has always been planned as a four-book arc—what I have come to think of as ‘the Odin Cycle’. That isn’t to say there won’t be more in the series—there definitely will be—just that the continuing mysteries unearthed in Books 1, 2 and 3 will all be solved by the time we reach the extremely explosive end of book 4! Thanks for bearing with me. It certainly has been a rollercoaster ride and I am going to try to make sure book 4—The Tomb of the Gods—finishes it in style. Release planned for January 2013.

Oh, and as you know by now, I just can’t guarantee everyone will survive...

The hate in his heart burned brighter than molten steel.

Matt Drake went up and over the wall and landed in silence. He crouched among the swaying shrubbery, listening, but sensed no change in the stillness around him. He paused for a moment and re-checked the Glock ‘subcompact.’

All was ready. The Blood King’s henchmen would go down hard tonight.

The house before him stood semi-dark. The downstairs kitchen and lounge was ablaze. The rest of the place was in darkness. He paused a second longer, carefully going over the layout he’d obtained from the previous now-dead henchman, before moving soundlessly forward.

His old training served him well and ran hot again in his veins, now he had a highly personal reason and requirement for it. Three of the Blood King’s henchmen had died horribly in three weeks.

Regardless of what he told him, Rodriguez would be number four.

Drake reached the rear entrance and checked the lock. Within minutes he had turned the handle and slipped inside. He heard a blast from the television and a muffled cheer. Rodriguez, bless the old mass-murderer, was watching the game.

He paced across the kitchen, not needing the light of his compact torch because of the glow emanating from the main room ahead. He paused at the hallway to listen intently.

Was there more than one guy? Hard to tell above the noise of the damn TV. No matter. He would kill them all.

The despair he’d suffered during the last three weeks since Kennedy’s death had come close to overwhelming him. He’d left his friends behind, making only two concessions. First, he’d called Torsten Dahl to warn the Swede about the Blood King’s vendetta and caution him to get his family to safety. And second, he’d enlisted the help of his old pals in the SAS. He’d entrusted them to look after Ben Blake’s family because he couldn’t.

He rarely spoke. He drank. Violence and darkness were his only friends. There was neither hope nor mercy left in his heart

He moved noiselessly up the passage. The place stank of dampness, sweat and fried food. The beer fumes were almost visible. Drake made a hard face.

His intel said one man lived here, a man who had helped kidnap at least three of the Blood King’s infamous ‘captives.’ Since the sinking of his ship and the man’s clearly well-planned escape, at least a dozen high-profile figures had tentatively and covertly come forward to explain that a member of their families was being held by the underworld figure. The Blood King was manipulating the decisions and actions of the United States by preying on its figurehead’s love and compassion.

His plan had been truly superb. No single man knew that any other man’s loved ones were in jeopardy, and the Blood King had influenced them all with a rod of iron and blood. Whatever was necessary. Whatever worked.

Drake figured they hadn’t even scratched the surface of who had been kidnapped yet. They couldn’t understand just how far the Blood King’s depraved control actually went.

A door opened to his left and an unshaven, fat man walked out. Drake acted instantly and with deadly force. He charged the man, drawing his knife and burying it deep into his gut, then forcing him with sheer momentum through the open door and into the lounge.

The fat man’s eyes bulged with disbelief and shock. Drake held him tight, a wide, screaming shield, burying the blade hard before letting it go and drawing the Glock.

Rodriguez was quick, despite the shock of Drake’s appearance. He had already rolled off the sagging couch to the floor and was fumbling at his belt. But it was the third man in the room who captured Drake’s attention.

A thick-set, long-haired man was grooving in the corner, a set of big black headphones clamped to his ears. But even as he grooved, even as he tapped out the beats of an anthem with his dirt-caked fingers, he was reaching for a sawn-off shotgun.

Drake made himself small. The deadly shot ripped into the fat man. Drake pushed the convulsing body aside and came up firing. Three shots took most of the music-man’s head off and sent his body crashing into the wall. The headphones flew away independently, arcing through the air and coming to rest on the enormous TV, perched nicely over the edge.

Blood trickled down the flat screen.

Rodriguez was still scrambling across the floor. Discarded chips and beer bounced and sprayed all around him. Drake was beside him in a heartbeat and shoved the Glock hard against the roof of his mouth.

Rodriguez gagged, but still scrabbled at his belt for a small knife. Drake watched with contempt, and when the Blood King’s lackey brought it around in a vicious slash, the ex-SAS man caught it and buried it hard into his assailant’s bicep.

Rodriguez sounded like a pig being slaughtered. Drake spun him around and leaned him back against the couch. He met the man’s pain-masked eyes.

“Tell me all you know,” Drake whispered, “about the Blood King.” He withdrew the Glock but kept it highly visible.

“The... the what?” Rodriguez’s accent was thick, hard to decipher due to his race and the pain.

Drake smashed the Glock hard into Rodriguez’s mouth. At least one tooth snapped off.

“Do not fuck with me.”
The venom in his voice disclosed more than just hate and despair. It let the Blood King’s man know hard death was truly imminent.

Drake tapped the Glock lightly against the man’s forehead. “We can start there if you like.”

“Alright. Be cool.” Rodriguez  rambled on through obvious pain. Blood coursed down his chin from his shattered teeth. “Boudreau’s a fuckin’ freak, man. You know the only reason the Blood King let him live?”

Drake ground the pistol into the man’s eye. “Do I look like a man who answers questions?” His voice grated like steel on steel. “Do I?”

“So he’s using Boudreau to clean up. No surprise. He’s probably destroying all the ranches.”

Rodriguez blinked. “You know about the ranches?”

“Where is he?” Drake felt the hate grab him. “Where?” In another second he was going to lose it and start beating Rodriguez to a pulp.

No loss. Piece of crap doesn’t know anything anyway. Just like the rest of them.
If one thing could be said for the Blood King, it was how well he concealed his tracks.

At that moment there was a flicker in Rodriguez’s eye. Drake rolled as something heavy passed where his head had been.

A fourth man, probably passed out in a nearby room and roused by the noise, had attacked.

Drake whipped around, flicking out a foot and nearly taking his new assailant’s head off. When the man crashed to the ground, Drake appraised him quickly—the heavy eyes, the tram-lines down both arms, the filthy T-shirt—and shot him twice in the head.

Drake shot him in the arm. “You haven’t been helpful to me.”