The Gateway (Harbinger of Doom Volume 1) 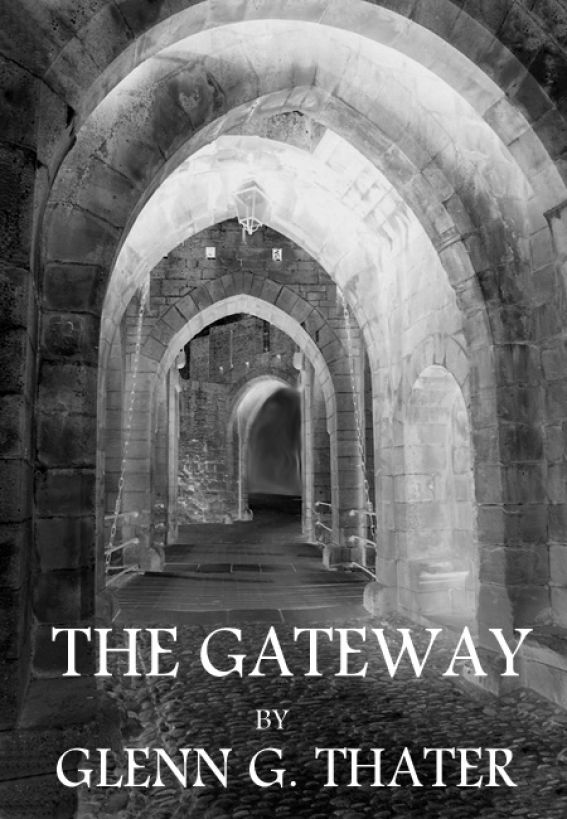 This book is a work of fiction. Names,
characters, places, and incidents either are the product of the
author’s imagination or are used fictitiously. Any resemblance to
actual persons, living or dead, events, or locales is entirely
coincidental.

This eBook is licensed for your personal
enjoyment only. This eBook may not be resold or given away to other
people. If you would like to share this book with another person,
please purchase an additional copy for each person you share it
with. If you’re reading this book and did not purchase it, or it
was not purchased for your use only, then you should return to
Smashwords.com and purchase your own copy. Thank you for respecting
the hard work of this author.

Discover other titles by Glenn G. Thater at
Smashwords.com

THE HARBINGER OF DOOM
SAGA

(Combines
The Gateway
and
The Fallen Angle
into a single
volume)

THE HERO AND THE FIEND – appears
in the Anthology
Shameless
Shorts

Although the original historical manuscripts
detailing the life and times of this classic warrior are still
inaccessible to the general public my contacts and travels have
afforded me rare opportunities to view and even duplicate some of
the original manuscripts which consist of more than ten thousand
documents stored in protected archives in twelve museums and
universities scattered across seven countries.

Due to the inaccessibility of these documents,
few modern scholars or authors are familiar with the “Thetian
manuscripts.” Consequently, the general public knows little or
nothing about this ancient hero who some scholars believe helped
shape much of the ancient world and perhaps was the historical
inspiration for the legends of Beowulf, Gilgamesh, King Arthur and
others.

Until now, no scholar has attempted a detailed
compilation of the entire Angle Theta saga although several notable
works containing Thetian stories have been penned through the
centuries. Grenville’s work “Ancient Warriors of Scandinavia”
(1884) and Addleson’s “The Ancient Cities of Prehistoric Europe”
(1921) both contain several stories of Theta’s exploits. The text
“The Warlords” (1408) by Chuan Chien contains two tales of Theta’s
adventures in ancient Asia. While there is no complete English
translation of Chien’s text, the accounts contained therein serve
as independent evidence of the existence of Theta as a historical
figure. The essay “Forgotten Empires” by Charles Sawyer (1754) and
Da Vinci’s manuscript “Of Prehistory” (1502) also contain story
fragments and references to the historical Theta. The voluminous
treatise “Prehistoric Cities of Europe” by Cantor (1928) presents
noteworthy, though non-conclusive, evidence of the historical
existence of the city of Lomion in what is now southwestern
England.

Some modern scholars do not accept the
historical efficacy of the Thetian manuscripts due to the
relatively small quantity of corroborating archeological evidence
for the ancient cities and cultures detailed therein. Thus, they
relegate Theta to the realms of myth, legend and allegory. Others
maintain that the scholarly texts mentioned above, coupled with the
original archived manuscripts, serve as sufficient evidence to
verify the historical existence of Theta the man. One can only hope
that in time the archeological record will further reinforce this
position.

Several years ago while researching Theta for
a story that I had planned to write, I had the good fortune to meet
and begin a long-standing collaboration with several leading
Thetian scholars, most notably Professor Augustine DiPipcorno of
the University of Padua, and Dr. Ann Lewis of The University of
Indiana, who have for some years been actively translating the
entire body of available original manuscripts. These professors are
leading a team that is currently preparing a series of detailed
scholarly texts that include all the original tales plus their
commentary and thorough critique of the corroborating scholarly,
historical, literary and archeological evidence.

The work you are now reading, however,
represents my re-envisioning of the first volume of the Professors’
translations into modern prose with additional dialogue and
descriptive language added so that these stories will be found more
accessible and entertaining to the typical reader. Further, I have
sometimes chosen to label certain fanciful creatures and devices
described in the original manuscripts using names and words that
are familiar to modern readers of fantasy and science fiction
tales. The story and chapter titles are my own and are meant to be
entertaining. In all cases, however, the central plots, facts,
themes, and spirit of the original tales remain
unchanged.

I hope you will come to enjoy the Thetian
tales as much as I have. Please feel free to leave any constructive
comments in the comments section of my website
http://www.angletheta.blogspot.com and/or in this work’s listing on
Amazon.com. Happy reading.

An Excerpt from The Saga of Angle
Theta

“
Ye wilt not thwart us again,
harbinger of doom!

We shall have this world this
time.

What once was ours will be ours
again!”

- The Chaos Lord Bhaal to The Lord
Angle Theta.

A grayed Lord and his lieutenants stood at the
fore of a small wedge of armored soldiers, veterans all. Malignant,
clinging mist wafted about, sickening the men and clouding their
vision. With the mist came a thunderous cacophony that consumed the
night, piercing the very souls of those unfortunates within its
demesne. A maleficent, skirling, bestial sound, akin to naught in
nature and much in nightmare. A preternatural wailing it was, and
in its wake bounded death.

“
All hell’s fallen on them,” said
Lord Eotrus.

Par Talbon made to move forward, but the old
knight’s hand darted out and held him fast.

“
We hold our ground,” said Lord
Eotrus gripping the small man’s shoulder tightly. “We cannot
advance in this mist and you can’t turn it all. Stern’s fate is in
Odin’s hands now.” Staring into the mist he drew forth his sword
from its ornate scabbard and raised the steel blade to his face - a
salute from olden times - then lowered it again, though he kept it
at the ready. “As is ours,” he said. “Our path is
clear.”

“
Nothing of Midgaard, my good
priest,” said Lord Eotrus. “Nothing of this world.”

The wailing grew ever louder. A deep rumbling
sound began and quickly intensified. Soon, the very earth itself
began to shake and shudder. Archers closed ranks before their lord
and his lieutenants. Swordsman and pikemen stood at the ready, eyes
wide but feet planted. Several cloaked men with staffs matching his
flanked Talbon.

Donnelin and Talbon exchanged worried glances
as they stood protectively about their lord.

At his liege’s command, the sorcerer uttered
forgotten words of eldritch power; secret words lost to all but the
chosen few. The ancient sorcery he called up crushed the unnatural
mist back against the night, though the darkness lingered beyond
the limits of the soldiers’ torchlight.

Lord Eotrus’s face grew ashen and his eyes
wide as the horror thundering down upon them came into view. A war
cry burst from his throat and he charged forward to meet his fate.
A few of the bravest soldiers followed him, but most dropped their
weapons or froze in a panic. Not one even bothered to try to
flee.

Angry wood screamed as the stairwell door
burst open. Brother Claradon Eotrus’s hand went to his sword hilt
as several figures flew through the portal onto the tower’s roof.
Par Tanch spun toward them, death flaring in his eyes and blue fire
licking the apex of his staff. But the wizard lowered his
ensorcelled weapon, and his aspect softened at the sight of Sir
Ector Eotrus’s haggard face. At the young nobleman’s heels were his
diminutive comrade Ob and a glinty-armored leviathan known as the
Lord Angle Theta. Behind them came one Dolan Silk, a wiry man of
sickly pallor and strange ears.

Ector approached his older brother and Tanch,
Ob following, whilst Lord Theta strode past them to the crenellated
parapet. Enshrouded in a midnight cloak, Theta stood transfixed,
gazing westward through the starlight at the Vermion Forest. Dolan
Silk melded into shadow.

“
Master Ector, thank the gods
you’ve returned safely,” said Tanch, though his gaze was affixed on
the mammoth figure at the parapet.

Tanch turned back toward them; an inscrutable
expression on his face.

“
Where’s father?” said Ector.
“Where are Sir Gabriel, Brother Donnelin and the
others?”

“
They’re all missing, dammit!”
said Claradon. “Father, Brother Donnelin, Par Talbon and all the
rangers. They never returned from the Vermion.”

Ector’s face blanched. His mouth agape, too
stunned to speak.

“
Stop shouting you fools,” said
Theta, his eyes never straying from the distant wood, his hand
gesturing to quiet the others.

“
And Sir Gabriel is in the
mountains somewhere,” said Claradon, more quietly this time, as he
glanced back toward Theta.

“
A hunting trip,” said Tanch. “Can
you believe that? The world’s ending and he goes off
hunting.”

“
Ector, who in Odin’s name is
that?” said Tanch, gesturing toward Theta. “And where did the other
go?” he said, looking about for Dolan.

“
We’ve got to find out what
happened,” said Claradon. “We’ve been debating all day and we’re
not getting anywhere.”

“
I’ll certainly not stand here
whilst my father lies dead or dying or worse,” said Ector. “We must
fly.”

“
Dammit all to hell” said Ob, “I’m
with Ector on this, what’re we waiting for; let’s get moving.” Ob
turned back toward the stairwell, then froze. He cocked his head to
the side and his prodigious ears twitched up and down in strange
fashion, as the pointy ears of gnomes are sometimes wont to do.
“What the hell is that? That don’t sound right natural to me.” Ob
held up his hand to silence the others. “Can you hear
it?”

The Reluctant Bride by Anne Marie Duquette
Between by Tefft, Cyndi
The Vampire Pendant by Sheri Whitefeather
Onslaught (Rise of the Empire Book 6) by Ivan Kal
Stormrider by David Gemmell
Into The Ruins by Blink, Bob
Make Believe by Smith, Genevieve
Favoritos de la fortuna by Colleen McCullough
Robot Adept by Piers Anthony
Summer of the Dead by Julia Keller
Our partner