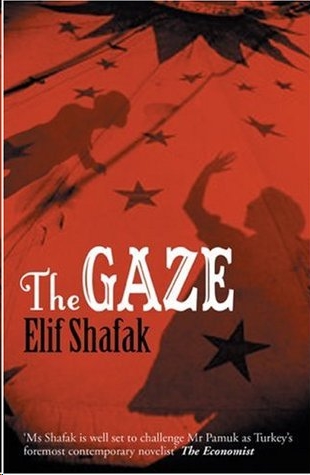 Translated from the Turkish
by Brendan Freely

ONE
‘Close Your Eyes!’

Elif Shafak is one of Turkey’s most acclaimed and outspoken novelists. She was born in 1971 and is the author of six novels, including
The Forty Rules of Love
,
The Bastard of Istanbul
,
The Gaze
,
The Saint of Incipient Insanities
and
The Flea Palace
, and one work of non-fiction. She teaches at the University of Arizona and divides her time between the US and Istanbul.

Brendan Freely is a freelance writer, editor and translator currently living in Istanbul.

‘There are inquisitive eyes behind each lattice screen;
It can be said that every lattice screen is a spy-hole shaped like a piece of
baklava
;
Thousands of lattice-framed eyes watch the neighbourhood.’

The flying balloon rose rhythmically, the snow-white clouds floated coyly by, the charcoal-grey sky darkened little by little, and just as the bright-yellow sun was setting silently and without echo, a violent wind blew up. All at once, we were shaken by the violence of the sudden wind. Lime, tar and clay; sticks and twigs, bugs and dusty earth rained down on us. I had to close both my eyes so that the storm wouldn’t take away what I saw. As I shut them, when my eyelashes touched, a noise like the sound of boiling oil coming into contact with water was heard. Air was escaping from the balloon; it was spraying emptiness into the emptiness for each moment it was out of sight. Anxiously, I opened my eyes. I was too late. It didn’t exist after all. I existed. I was awake.

B-C was sitting on the edge of the bed, with his eyebrows raised, looking at me angrily.

‘Enough already. I’ve been shaking you for some time now, but I couldn’t wake you. You were sleeping so deeply.’

Without giving me a chance to answer, he roughly pulled the blanket off me. With the blanket gone, my body resembled a rowboat that had been stranded, rolled up in its nets, in a sea from which the water had been drained away. I was deprived of the warm darkness of water. I emerged fearfully into the daylight, but not fast enough for B-C. While I slept, I was able to move my limbs this way and that, taking pleasure in the fact that I was hidden from view by the blanket, and now I was trying nervously to compose them. B-C’s insistent call was pulling them to him like a magnet.

‘Everything is being shaken loose outside, all hell is breaking loose, and her ladyship is still snoring away. Come on, get up. Get up and watch the commotion.’

The terrace door was wide open, and the wind was gently wafting in. As the curtains were being blown here and there with a terrifying effect peculiar to the curtains in haunted houses in films, the sky was visible through the gap between them. A starless, cloudless, moonless night; a pitch-black filter had been placed over our eyes in order that they might not be dazzled.

I stood well away from the window.

Well away from the window.

What I saw with B-C’s eyes was this:

One of the pom-poms…is very loose…like dead skin torn from the lip…it attempted to leave…its own flesh…the bird’s home…the place where it belongs…it dangles…it’s clear it will come off…it’s clear it won’t last…but what about the other one…the pom-pom that’s still sound…is it really sound…or is it just pretending to be sound…is it mimicking something it isn’t…a truth to be understood…the pom-pom must be pulled forcefully…but if it comes off anyway…even in its sound state…openly…the best thing to do…not to try to do the impossible…but that’s curiosity for you…she wants to know…and see…whatever her eyes can see…she takes off her slipper…the one with the sound pom-pom…the flies are far away…like vultures after carrion…like a black cloud devouring the light’s flesh…everything is exactly the same…but the woman knows very well…which one she will choose.

The woman’s voice cuts through the air.

Well away from the window.

This is what I saw through B-C’s eyes.

Quite late at night, in one of the two sides of Istanbul, in a neighbourhood where morally upright families and freethinking single people frequently lived side-by-side, at the top of a steep hill that was difficult to ascend and descend, a woman, probably in her fifties, the mother of three children, was leaning against the lamp-post, shouting to the flies that she wanted her husband back. Dogs were howling, doors were opening, lights were burning, babies were crying, and the gossip of the next few days was being composed. The neighbours had gathered on the balconies and at the windows; they’d spilled out into the street. Their eyes, shining brightly with the heat of the commotion, were as wide as saucers from surprise. There was enough material to feed the gossip mill of the neighbourhood all winter. Everyone was eagerly taking in as much as they could.

If I said everyone, I meant excluding the inhabitants of the house!

The inhabitants of the house, among them children, sisters, nephews and in-laws, surprised at what had befallen them, ran out barefoot, in pyjamas and night-gowns, with cream on their faces and rollers in their hair, and surrounded the woman, pinching and pulling and begging her, trying to get her inside. ‘Let’s go home so she can do whatever she wants, cry and shout as much as she wants, let’s get her inside so the neighbours won’t see her. It doesn’t matter if they hear her so long as they don’t see her.’

The fear of embarrassment shows on the faces of all the inhabitants of the house except for the youngest in the family. He is a loveable rascal who at the age of five least accepts this commotion as part of his lot. The others wear their fears as if they were on a string, like a bracelet or a necklace. They jump around looking for new fears. The elders are not aware of what the young one is doing, they’re too busy trying to get the woman under control but it’s not easy, not easy at all.

They saw that they weren’t likely to succeed, they saw that she was completely out of control, so they manhandled her into a taxi. They had their own car, but once again someone had parked on the pavement and blocked their way. Indeed the car that was blocking them was probably owned by one of the people who was watching and it wouldn’t have been difficult to find him, but they thought it best not to bother. It was best just to take a taxi as soon as possible to the nearest and farthest hospital.

The taxi driver…a young hunk…newly married…allowed his wife…to work…until they had children…praised for being progressive…but by the time they got married…they were already up to their necks in debt…there are advantages to having your wife work…a man younger than the taxi driver…will take over the taxi later at night…and work until morning…as soon as it’s morning he’ll turn it back over to his friend…both of them together…work for someone who won the lottery…seeing the man later…a big, strapping man…like a barrel…still dreams that he’s poor…gives thanks when he wakes…in a loud voice…still counts his pennies…asks for his penny…in a low voice…so God won’t hear…the taxi driver and his friend…whether they earn money or not…always count out the same amount…into their boss’s palm…but the taxi driver’s friend is not progressive…he won’t allow his wife to work…even if he did who would hire someone like her…she’s not a lady but a kind of monstrosity…she gave birth to five children one after the other…and all five looked like her…twisted mouths and noses…all of them misshapen…though our man’s wife isn’t at all like that…she’s slender…thin and fresh…though a bit lacking in height…in spite of that the girl looks like a model, honestly…she’s wasting herself working in boutiques…she said so herself…this guy is bothering her…with the excuse of buying sweaters and shirts…he drops by the shop every day…The taxi driver is going to go by tomorrow and put a stop to it…when he thinks of his wife…he sometimes feels the itch…a couple of times he couldn’t stand it…he pulled his cab up in front of the house…while the whole neighbourhood laughed up its sleeve…but he doesn’t even go much to the district where he lives…he has to work without a break…he does work, for God…to tell the truth he was thinking of having a little adventure tonight with his wife…maybe when he gets rid of these customers…he looks at the passengers in the rear-view mirror…‘What a pity,’ he says to himself…‘The poor thing has gone round the bend…it isn’t easy with things getting so expensive…prices going up every day.’ Indeed it was for this reason alone…that he started working nights…night customers…don’t add up what the driver makes…the way day customers do…night customers talk about different things…you’d think…that a person either talks about serious things or about total nonsense…but night customers…are nonsensical when they talk about serious things…and serious when they talk nonsense…‘For instance just the other day…I had a customer just like that…his face misshapen…pickled as a newt…almost dawn…five in the morning…the guy insisted…“Come on…let’s find Sultan Mehmet the Conquerer’s tomb…let’s have a word with him…what the hell did you conquer this city for?…dragging your ships over the hills…so many men martyred…all for this stupid place?” ’…he was drunk…he was stubborn…he was determined…the taxi driver didn’t say anything of course…but he looked…the drunk had stuck his head out the window…shouting at the top of his voice…‘Mehmet Sultan! Sultan Mehmet!…Where are you?…Get up and look around!…Look what a state they’ve put your descendants in!’…there was no shutting him up…true Moslems going to pray at that hour…were terrified…looking at the taxi…the taxi driver was bewildered…he couldn’t cope with it…so he pulled up in front of a police station…he left the drunk in the hands of the police…later he regretted it…Mehmet the Conqueror’s descendant was a good-natured drunk…as they manhandled him into the police station…he turned and asked…‘They say he wore an earring. Is that true?’…the taxi driver’s curiosity was aroused…he wanted to ask around about Mehmet the Conqueror’s earring…‘Get a grip on yourself,’ he said to himself…‘don’t be as crazy as that madman…as if it were possible…The great Mehmet the Conqueror…what’s it to you anyway?…as if we didn’t have enough troubles…to waste time worrying about Mehmet the Conqueror’s earring?’…he heard on the news the other day…that the population of the insane asylums…has risen dramatically…this year…‘It’s clear that the woman in the back…has gone out of her mind too…my poor country…we’re all going to die mad…or insane!’