Read The Ghost of Valentine Past Online

The Ghost of Valentine Past 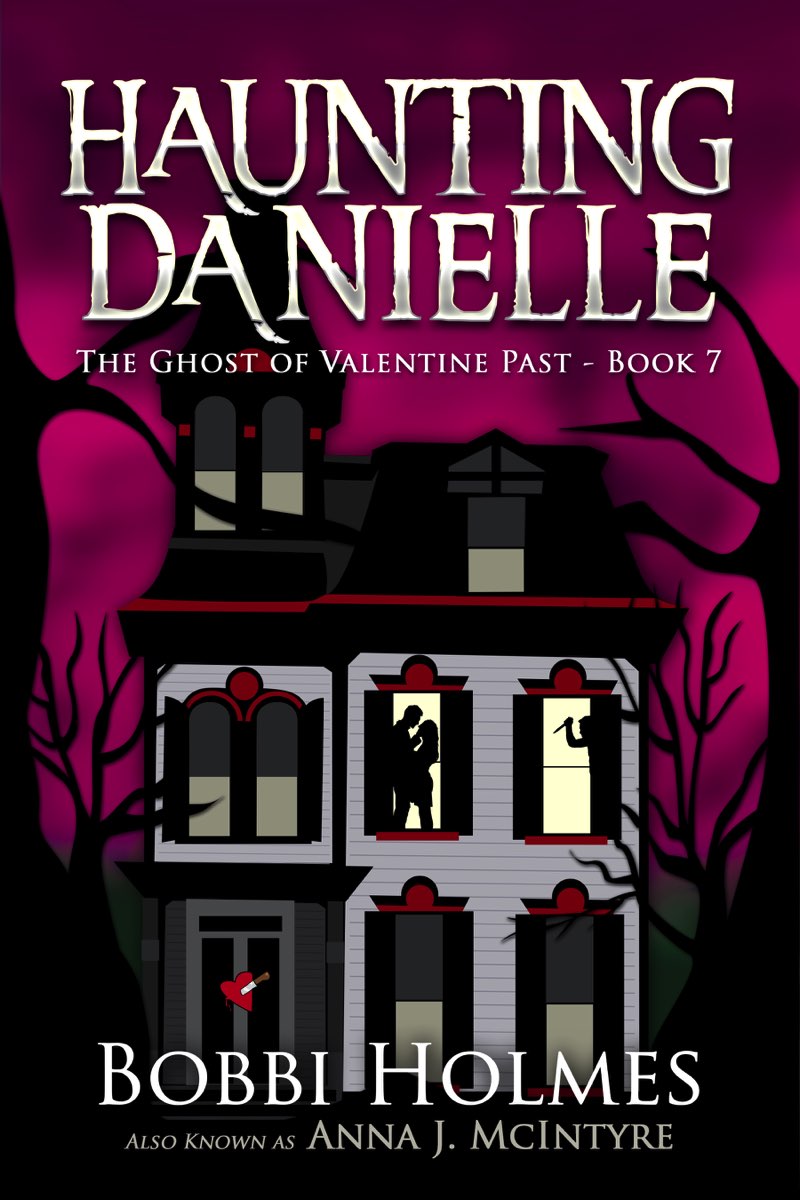 The Ghost from the Sea

The Ghost of Valentine Past

This novel is a work of fiction.

Any resemblance to places or actual persons,

living or dead is entirely coincidental.

Dedicated to those who I've loved and lost to death.

I prefer to believe it's nothing more than a doorway into forever.

M
eghan Carter doubted
the building was haunted. There was normally a rational explanation for odd noises during the night, unexpected chilly drafts, flickering light bulbs, and rearranged furniture. That didn't mean Meghan was a nonbeliever. In fact, she had been seeing ghosts for as long as she could remember. Of course, she didn't share that with her acquaintances. To them, she was simply a researcher of paranormal activities, and when she received calls like this one, they typically turned out to be non-ghost related.

Meghan parked in front of the boarded up commercial building. From what she understood, this area of Sacramento, California, was considered prime commercial real estate. She thought it a shame the building was practically abandoned. Perhaps Tom was right, and the place was haunted. Why else would someone let the building sit idle for so long?

Just as she climbed out of her Jeep, Tom pulled up behind her. Meghan paused by the side of the Jeep and gave him a brief wave as he parked. A woman she didn't recognize was with him. Meghan assumed it was the building's owner.

“Hey it's Ghost Busters!” Tom called out as he got out of his car and slammed its door shut.

“Funny, ha ha,” Meghan returned dryly. “You know, I can get back in my car and go home. I should be there putting my Christmas decorations away, anyway.”

“I'm sorry. I just couldn't resist,” Tom said sheepishly. He gestured to his passenger, who had just gotten out of his car. The woman's eyes nervously darted from Megan to the boarded up building.

“Meghan, this is Ann Reynolds, the owner. Ann, this is Meghan, who I've been telling you about,” Tom introduced.

“I'm not really sure how this is going to help,” the woman said, wringing her hands. “But, I'm at my wit's end and willing to try anything. Even an exorcism.”

“I'm not sure what Tom's told you, but I don't do exorcisms.” Meghan smiled kindly.

Anne's gaze darted from Meghan to Tom. “I don't understand.”

“I told you, Meghan studies this sort of thingâparanormal activities. If your place is really being haunted, she'll be able to tell, and then she can help you figure out what you need to do next."

“I want it to stop!” Ann cried out. “I thought you said she could take care of it!”

Megan reached out and patted Ann's arm reassuringly. “Maybe I can. But first, why don't we go inside, and you can show me what's been happening.”

“Okay then,” Meghan said patiently. “Why don't you tell me what's been happening, exactly.”

Tom spoke up, “Ann and her husband used to run their business out of this building. Then, over a year ago, strange things started happening. About six months ago, Ann's husband passed away, and she found it impossible to keep running the business aloneânot with all the strange occurrences going on.”

“It didn't seem as frightening when my husband, Albert, was here. For one thing, Albert was getting forgetful, and I figured he was responsible for most of it. But he wasn't,” Ann explained.

“Doors that were closed would suddenly be open. I'd clean up in the office and return to find drawers pulled out, the trashcan tipped over. And light bulbsâthe light bulbs kept popping. I even called an electrician. He said there was nothing wrong.”

“That's when I thought of you, Meghan. I remembered our conversation about lingering spirits screwing around with electricity.”

“Well, that's one theory some have,” Meghan said.

“I couldn't take it anymore. I closed the business. I started taking Social Security this last year anyway, and I had Albert's life insurance. But I need to sell the building, and I just don't feel right about selling it to some poor unsuspecting buyer, not if it's cursed. That doesn't seem right.”

Ann nodded and dug into her pocket, pulling out a keychain. “I hope you don't mind if I stay here.”

“No. It might be quicker if I do it alone.” Meghan took the key from Ann. If she did encounter a spirit, she would feel awkward trying to communicate with it while Tom stood by and listened.

“I'm afraid the electricity is turned off, but the skylights let in plenty of sunshine,” Ann told her.

A few moments later, Meghan unlocked the building's front door and gently pushed it open. She found it was fairly bright inside, due to the sun streaming in through overhead skylights. Stepping into the building, she closed the door behind her and looked around. Dust coated the furniture and empty shelves.

Just as she reached the center of the room, the overhead light flickered on and off. Looking up to the light fixture, Meghan swallowed nervously and said under her breath, “Either Ann is wrong about the electricity being off orâ¦”

Before she could finish her sentence, a ghostly apparition appeared, just a few feet from her. A strikingly handsome, well-dressed young man, he seemed more confused and frightened than poor Ann outside. By his clothes, he was obviously of Tom's generation and not some ghost who had been lingering for decades.

Her greeting startled him. “You're willing to talk to me?”

“Everyone is so rude. All I wanted was directions. Why won't anyone help me?”

He frowned thoughtfully for a moment and then said, “I'm not really sure. That's why I need someone to help me.”

“Do you remember how you got here?”

He considered the question a moment before answering and then pointed to the doorway Meghan had just entered. “I came through that door, of course.”

Meghan looked around the room. “Until I came in, there was no one here to help you. Why didn't you just leave?”

He frowned again. “There was. I'm sure there was. And thenâ¦then there wasn't.”

“So why didn't you leave once you were alone?”

“Can you tell me your name?”

“Hello Lucas Sanders, my name is Meghan. Do you know where you were before you came in here?”

Lucas shook his head. “Things are a little confused for me.”

“What was the last thing you remember before coming in here?” Meghan asked.

Lucas closed his eyes and tried to remember. “Everything is so jumbled upâ¦butâ¦” He opened his eyes again and stared at Meghan. “Danielle, Danielle is going to be worried about me.”

“My wife, Danielle. She's expecting me. I just remembered. We have to go Christmas shopping. I promised I'd go with her. Christmas is in five days.”

“No, Lucas. Christmas was almost two weeks ago.”

“No. That's impossible. I couldn't have missed Christmas.”

“Lucas, I have a feeling the Christmas you're talking about was more than two weeks ago.”

“Yes, I know. But do you? Remember, you've been wandering around this building for some time. You said there used to be people here. But I happen to know this building has been empty for almost six months now.”

“That's impossible. I haven't been here for six months!”

“Then tell me what year it is.”

Meghan pulled her iPhone out of her purse and opened her calendar. She showed it to Lucas.

“That's impossible,” he said dully, sitting down in a chair, staring ahead blankly. “I don't understand.”

“I really hate to be the one to have to tell you this Lucas. But I think you already know, you just haven't come to terms with it yet, which is why you keep rambling around this building. You knowâ¦deep downâ¦you know, don't you?”

“I'm sorry, Lucas. Do you know how it happened?”

He looked up at Meghan and shook his head again. “No. I don't remember. Everything is confusedâ¦but something strangeâ¦”

“It doesn't seem quite as jumbled as it was before you came in here.”

“Sometimes a spirit just needs someone to help them acknowledge their death, which enables them to see things more clearly, and then they can move on,” she explained.

“When we die, we aren't supposed to hang around here. You have somewhere to go. Haunting this building is no way for you to spend your eternity.”

“I've been haunting this building?”

“Yes. From what I understand, that's exactly what you've been doing.”

“I can't go anywhere; I need to find Danielle first.”

“Yes. I remember now; I need to find her before I move on. It's important. But I don't know how to find her.”

“Do you remember how you died?”

“Well, maybe knowing how you died will help you remember the rest of it.” Meghan opened a search window on her iPhone's browser and typed in Lucas' full name and Sacramento, California. Within less than a minute, she had the answer.

“What did you find out?”

“I now understand why you're here. Apparently, you were killed in a car accidentâacross the street from this very building. You died on December 20, 2013.” She pulled up a few more webpages connected to his name.

“Does it say where I can find Danielle?”

“Ummâ¦” Meghan looked up from the phone. “I've a feeling your wife really does not want to see youâeven if that was possible, which it isn't. I think you need to move on, follow the light as they say.”

He adamantly shook his head. “No, I need to find my wife.”

“According to the second online articleâyou were killed with another woman. Someone named Kelsey Woods. Kelsey's spirit isn't around here, is she?”

“Do you also remember Kelsey was your lover? According to the article, you were killed with your lover, Kelsey Wood.”

“Oh my god,” Lucas started to pace the room. “That explains it. That's why I need to find Danielle.”

“I'm sorry, Lucas, that's really impossible. You need to move on. There's nothing you can do about it now.”

“I need to remember where I lived with Danielleâ¦why can't I remember that? I need to get home.”

“I'll see what I can find on herâbut you have to promise me you'll leave here and not come back.”

“You also have to promise not to haunt your poor wife.”

“I'd feel horrible if I helped you find your wife only to have you hang around her house, slam her doors, and make her light bulbs explode.”

“I need to find her. Please help me.”

“Do you promise not to haunt her? Check on her, make sure she's okay, and then move on. Do you agree?”

He didn't answer immediately; finally, he nodded his agreement.

Meghan looked at her cellphone again and began searching for any information on Danielle Saunders. After a few minutes, she looked up and asked, “Was your wife's maiden name Boatman?”

“Why would she do that?”

Meghan arched her brows. “Why do you think?”

“Ohâ¦I wonder if she's still living in our house.”

“Oregon? Why would Danielle move to Oregon?”

“She's living in Frederickport, Oregonâon the coast. According to this article, she runs a bed and breakfast called Marlow House.”

When Meghan looked up from her cellphone, Lucas was gone.

Project: Runaway Bride by Heidi Betts
Mindwalker by AJ Steiger
Wine of the Gods 4: Explorers by Pam Uphoff
The Case of the Sleepwalker's Niece by Erle Stanley Gardner
Hannah & the Spindle Whorl by Carol Anne Shaw
Orgasm in 5 Minutes by Tina Robbins
The Fabled by S. L. Gavyn
Pretty Persuasion by Olivia Kingsley
With This Kiss: Part Two by Eloisa James
The Kid in the Red Jacket by Barbara Park
Our partner