Read The Girl Who Walked on Air Online

The Girl Who Walked on Air 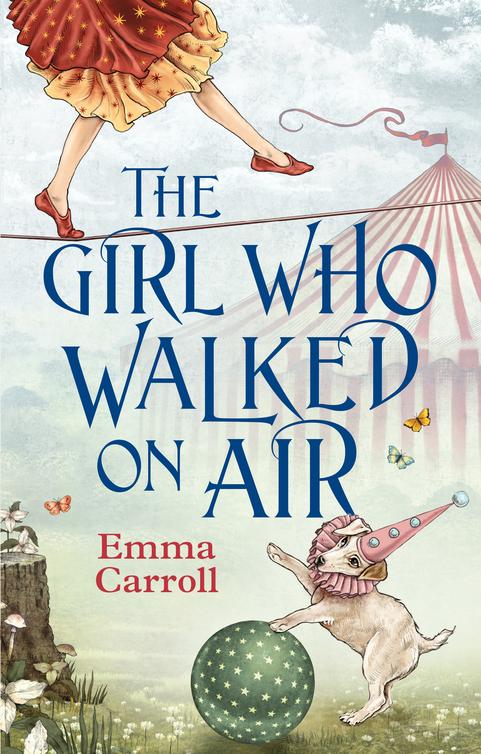 who gave me books, not ponies

‘
Life is always a tightrope or a feather bed. Give me the tightrope.’

The bigger the danger, the bigger the crowd. One look at tonight’s punters said it all. With just minutes till show time, the big top was almost full and I was quite ready to burn with excitement. Every last ticket was sold. And still the queue snaked out of the field and down the lane until all you could see were people’s hats bobbing above the hedgerows.

First thing this morning, the posters had gone up all over town. ‘MORE DARING THAN EVER!’ they’d said in blue and gold letters. ‘WATCH MONSIEUR MERCURY DEFY GRAVITY ON HIS TRAPEZE!’ To me, M. Mercury was good old Jasper, who I lived with in a tiny trailer, and who drank lapsang tea out of dainty cups and let me have first dibs on every piecrust. Which was more than could be said for my mam. When I was just a baby she left me at the circus, the way most people forget an umbrella.

Inside the ticket booth where I worked there wasn’t space to swing a cat. I felt it specially tonight, jiggling from foot to foot, impatient to get finished so I’d be free to watch the show. My dog Pip sensed it too; sat beside me, he watched my every move. At last, the final punters filed past to claim their tickets. They were a noisy bunch, laughing and nattering, their breath like smoke in the evening air. They’d be quiet soon enough. Once they were inside the big top, they’d squeeze onto a bench and look upwards. And what they’d see would leave them speechless.

A little shiver went down my neck.
Imagine if I was about to perform. All those eyes gazing up at me. Just imagine it!

I came back to earth with a bump. The circus owner, Mr Leo Chipchase, was in the doorway. He’d put on his best tartan waistcoat and was smiling, which made a change.

‘Think of all those backsides on seats, Louie,’ he said as he squeezed in beside me to count the takings. ‘The bigger the danger . . .’

He did have a point. There were grander circuses than ours, with more animals, more curiosities, more sparkle. Backsides on seats mattered. So, what better way to draw the crowds than a thrilling new routine. And tonight that’s exactly what they’d get. Jasper would perform not a double but a TRIPLE somersault from his trapeze. No other circus boasted such a stunt. It was genius.

But it was dangerous too. Now I’d reminded myself of this fact, it grew like a little worm inside my head. Tonight’s show had that
whiff of death
all right. How anyone could hang mid-air for so long I didn’t know. Jasper made it look easy. And I thought of Charles Blondin – the GREAT Blondin – who’d crossed Niagara Falls on a
tightrope
. One hundred
thousand
people had turned up to watch him. They placed bets that he’d fall and die. He didn’t, of course, but I still felt sick thinking about it.

At last, the queue ended.

‘Can I go now?’ I asked, for my fidgeting had got worse.

If I was quick, I’d get to wish Jasper luck. And be sure of a good viewing spot at the back of the big top.

Mr Chipchase waved me away. ‘Go.’

I darted across the showground straight for the big top. Smells of horse sweat and gingerbread filled the air. There was music too, the organ and drums all fast and furious, signalling the show was about to start. It was the bit of circus life I loved best, that moment before the action, when the very air tingled. And tonight I felt it keenly. How I dreamed of being a showstopper like Jasper. Breathed it. Lived it. But on this subject Mr Chipchase was clear. ‘Not a chance, Louie,’ he always said. ‘You’re too young.’

Never mind that Mighty Ned the ringmaster was my age. Or Kitty Quickblade, who threw knives, was only a tiny bit older. But when I’d pointed this out Mr Chipchase went red enough to burst.

So these days I watched from the sidelines. And I kept my dreams to myself.

I realised now that Pip wasn’t with me. Cupping my hands to my mouth, I yelled his name. He came hurtling towards me like he’d been fired from a cannon, a terrier-sized blur of white with one brown ear.

‘You little monkey!’ I said as he squirmed at my feet. ‘Now stay close.’ He had no sense of occasion, this dog of mine.

To reach the big top we had to pass Miss Lilly’s fortune-telling tent. She stood in her doorway. ‘’Tis a strange night,’ she said as I went by.

‘Evening to you too, Miss Lilly,’ I said. ‘Must dash. I can’t miss Jasper’s performance.’

‘Very wise,’ she said. ‘A great change is on the way. The cards are predicting it.’

She often came out with this queer stuff. It was fine with her punters as they’d paid for a tarot reading, but I didn’t want to hear it. Not tonight.

I rushed on. Behind the big top was a roped-off patch of grass. It was abustle with horses and jugglers and performers limbering up. In the centre of the space a bonfire blazed, making the dusk seem darker than before. It made me blink. And run smack bang into Kitty Quickblade.

‘Watch it, weasel!’ she cried.

I hated her calling me that. What she meant was, ‘You’re not like us, you’re not proper circus,’ because I had pale skin and green eyes and hair the colour of cinnamon, which no one else here did.

She tossed back her own dark curls, hands on hips. ‘What do you say?’ she said.

Her tunic glittered in the firelight. It was all my handiwork, for when I wasn’t selling tickets I mended costumes. I’d sewn every last silver sequin of this one till my fingertips were raw. It looked magnificent. But I’d never got as much as a smile for my trouble. Or a decent wage.

Really I wanted to wallop her one. But Kitty was Mr Chipchase’s daughter, which meant I had to mind my manners.

Since I’d grovelled enough, she let me past. I ducked inside the tent, Pip at my heels. The space backstage was the size of a small courtyard and brightly lit. Dusty velvet drapes separated us from the main ring. Yet the smell of sawdust was just as sharp, the ooohs and aaahs of the crowd as clear. We might’ve been out in the ring ourselves. It made the hairs lift on the back of my neck.

In the middle of everyone was Ned the ringmaster. Done up in his top hat and scarlet tailcoat he looked awful smart. Especially since out of costume he was all elbows and giant feet.

‘Almost time, showpeople!’ he cried, then seeing me he dropped his voice, swaying like he might faint. ‘Wish me luck, Louie.’

‘You great idiot.’ I shoved him hard, for we were like that, Ned and me, always mucking around. Lately I suspected he’d gone soft on me. I hoped he’d snap out of it soon. ‘My luck’s for Jasper, not you.’

A hand touched my shoulder. I spun round to see Jasper, looking every inch the showstopper. His dark hair was slicked back and his costume sparkled green and red. There was nothing of the
whiff of death
about him; he was all puffed up strong like a lion.

‘Everything all right, Louie?’ he said, bending down to stroke Pip, who wagged his tail.

‘Just excited for you.’ And I was too. My stomach fluttered madly.

Jasper straightened up. ‘Here’s to good luck, then,’ he said, reaching for my hand. He kissed my palm three times, same as we did before every show.

‘I’ll keep them safe till afterwards,’ I said, closing my hand to a fist. Once the performance was over, I’d give him the three kisses back. It was our ritual; it brought us luck. Always.

Jasper went up on tiptoe then stepped forward. The curtains closed behind him. I waited for the lights to dip, then peered through a chink in the fabric. Marco let me stand in front of him. He said he’d see fine over the top of my head. Pip sat on my feet, his little body trembling. I hardly dared breathe.

High up in the roof, Jasper flexed his arms. As he waved to the crowd, his tunic flickered in the lights. It made me think of dragonflies. Then he put rosin on his hands and gripped the trapeze. As the crowd went completely hushed, my own mouth turned powder-dry.

Jasper started easy. Slow and sure, he swung from one side of the tent to the other like a clock part. He tucked his knees over the bar, let his arms trail then folded himself over. The drumbeats slowed. It was almost restful. I breathed again.

The music kept pace. He swung this way. That way. Now he was a blur of colour. His legs were stretched out straight. Then he flipped upwards. He let go of the swing and somersaulted twice before grabbing the trapeze again. He did it once more. Then spun backwards. The crowd gasped. Though I’d seen his routine in practice, I couldn’t take my eyes off him. Nothing else mattered. A spell had been cast over us all.

Then Mighty Ned spoke. ‘And now ladies and gentlemen, for the triple somersault, the most daring trick of all . . .’

The drum roll seemed to go on and on. Jasper stretched his whole body, swung low and wide, gaining momentum. The magic of it held me fast. He reached high up into the roof. At the very top of the arc he let go. He spun once, twice, three times and seemed to hang in the air. Then he reached for the trapeze.

He fell to the ground like a shot bird.