Read The Girl with the Dragon Tattoo Online 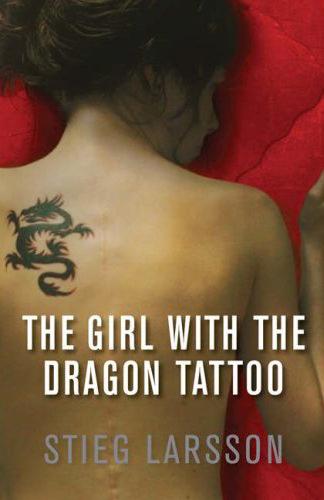 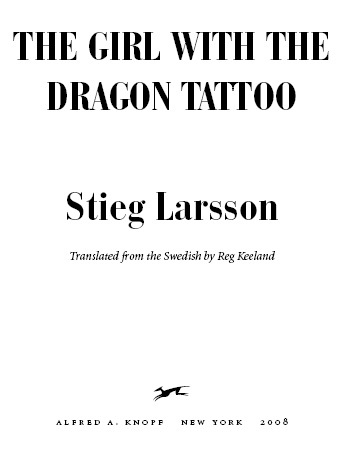 PROLOGUE A FRIDAY IN NOVEMBER

A Friday in November

It happened every year, was almost a ritual. And this was his eighty-second birthday. When, as usual, the flower was delivered, he took off the wrapping paper and then picked up the telephone to call Detective Superintendent Morell who, when he retired, had moved to Lake Siljan in Dalarna. They were not only the same age, they had been born on the same day—which was something of an irony under the circumstances. The old policeman was sitting with his coffee, waiting, expecting the call.

“I don’t know what kind it is. I’ll have to get someone to tell me what it is. It’s white.”

“Just the flower. The frame is the same kind as last year. One of those do-it-yourself ones.”

“Same as always, all in capitals. Upright, neat lettering.”

With that, the subject was exhausted, and not another word was exchanged for almost a minute. The retired policeman leaned back in his kitchen chair and drew on his pipe. He knew he was no longer expected to come up with a pithy comment or any sharp question which would shed a new light on the case. Those days had long since passed, and the exchange between the two men seemed like a ritual attaching to a mystery which no-one else in the whole world had the least interest in unravelling.

The Latin name was
Leptospermum (Myrtaceae) rubinette
. It was a plant about four inches high with small, heather-like foliage and a white flower with five petals about one inch across.

The plant was native to the Australian bush and uplands, where it was to be found among tussocks of grass. There it was called Desert Snow. Someone at the botanical gardens in Uppsala would later confirm that it was a plant seldom cultivated in Sweden. The botanist wrote in her report that it was related to the tea tree and that it was sometimes confused with its more common cousin
Leptospermum scoparium,
which grew in abundance in New Zealand. What distinguished them, she pointed out, was that
rubinette
had a small number of microscopic pink dots at the tips of the petals, giving the flower a faint pinkish tinge.

Rubinette
was altogether an unpretentious flower. It had no known medicinal properties, and it could not induce hallucinatory experiences. It was neither edible, nor had a use in the manufacture of plant dyes. On the other hand, the aboriginal people of Australia regarded as sacred the region and the flora around Ayers Rock.

The botanist said that she herself had never seen one before, but after consulting her colleagues she was to report that attempts had been made to introduce the plant at a nursery in Göteborg, and that it might, of course, be cultivated by amateur botanists. It was difficult to grow in Sweden because it thrived in a dry climate and had to remain indoors half of the year. It would not thrive in calcareous soil and it had to be watered from below. It needed pampering.

The fact of its being so rare a flower ought to have made it easier to trace the source of this particular specimen, but in practice it was an impossible task. There was no registry to look it up in, no licences to explore. Anywhere from a handful to a few hundred enthusiasts could have had access to seeds or plants. And those could have changed hands between friends or been bought by mail order from anywhere in Europe, anywhere in the Antipodes.

But it was only one in the series of mystifying flowers that each year arrived by post on the first day of November. They were always beautiful and for the most part rare flowers, always pressed, mounted on water-colour paper in a simple frame measuring six inches by eleven inches.

The strange story of the flowers had never been reported in the press; only a very few people knew of it. Thirty years ago the regular arrival of the flower was the object of much scrutiny—at the National Forensic Laboratory, among fingerprint experts, graphologists, criminal investigators, and one or two relatives and friends of the recipient. Now the actors in the drama were but three: the elderly birthday boy, the retired police detective, and the person who had posted the flower. The first two at least had reached such an age that the group of interested parties would soon be further diminished.

The policeman was a hardened veteran. He would never forget his first case, in which he had had to take into custody a violent and appallingly drunk worker at an electrical substation before he caused others harm. During his career he had brought in poachers, wife beaters, con men, car thieves, and drunk drivers. He had dealt with burglars, drug dealers, rapists, and one deranged bomber. He had been involved in nine murder or manslaughter cases. In five of these the murderer had called the police himself and, full of remorse, confessed to having killed his wife or brother or some other relative. Two others were solved within a few days. Another required the assistance of the National Criminal Police and took two years.

The ninth case was solved to the police’s satisfaction, which is to say that they knew who the murderer was, but because the evidence was so insubstantial the public prosecutor decided not to proceed with the case. To the detective superintendent’s dismay, the statute of limitations eventually put an end to the matter. But all in all he could look back on an impressive career.

He was anything but pleased.

For the detective, the “Case of the Pressed Flowers” had been nagging at him for years—his last, unsolved, and frustrating case. The situation was doubly absurd because after spending literally thousands of hours brooding, on duty and off, he could not say beyond doubt that a crime had indeed been committed.

The two men knew that whoever had mounted the flowers would have worn gloves, that there would be no fingerprints on the frame or the glass. The frame could have been bought in camera shops or stationery stores the world over. There was, quite simply, no lead to follow. Most often the parcel was posted in Stockholm, but three times from London, twice from Paris, twice from Copenhagen, once from Madrid, once from Bonn, and once from Pensacola, Florida. The detective superintendent had had to look it up in an atlas.

After putting down the telephone the eighty-two-year-old birthday boy sat for a long time looking at the pretty but meaningless flower whose name he did not yet know. Then he looked up at the wall above his desk. There hung forty-three pressed flowers in their frames. Four rows of ten, and one at the bottom with four. In the top row one was missing from the ninth slot. Desert Snow would be number forty-four.

Without warning he began to weep. He surprised himself with this sudden burst of emotion after almost forty years. 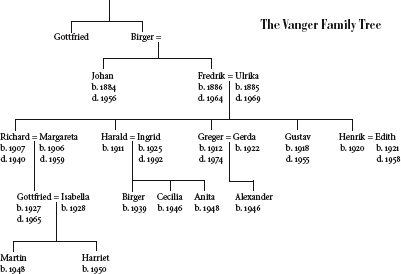 Eighteen percent of the women in Sweden have at one time been threatened by a man.

The trial was irretrievably over; everything that could be said had been said, but he had never doubted that he would lose. The written verdict was handed down at 10:00 on Friday morning, and all that remained was a summing up from the reporters waiting in the corridor outside the district court.

“Carl” Mikael Blomkvist saw them through the doorway and slowed his step. He had no wish to discuss the verdict, but questions were unavoidable, and he—of all people—knew that they had to be asked and answered.
This is how it is to be a criminal,
he thought.
On the other side of the microphone.
He straightened up and tried to smile. The reporters gave him friendly, almost embarrassed greetings.

“Give us a sound bite,
Kalle Blomkvist.
” It was a reporter from one of the evening papers.

Blomkvist, hearing the nickname, forced himself as always not to roll his eyes. Once, when he was twenty-three and had just started his first summer job as a journalist, Blomkvist had chanced upon a gang which had pulled off five bank robberies over the past two years. There was no doubt that it was the same gang in every instance. Their trademark was to hold up two banks at a time with military precision. They wore masks from Disney World, so inevitably police logic dubbed them the Donald Duck Gang. The newspapers renamed them the Bear Gang, which sounded more sinister, more appropriate to the fact that on two occasions they had recklessly fired warning shots and threatened curious passersby.

Their sixth outing was at a bank in Östergötland at the height of the holiday season. A reporter from the local radio station happened to be in the bank at the time. As soon as the robbers were gone he went to a public telephone and dictated his story for live broadcast.