Read The Girl With the Painted Face Online

The Girl With the Painted Face 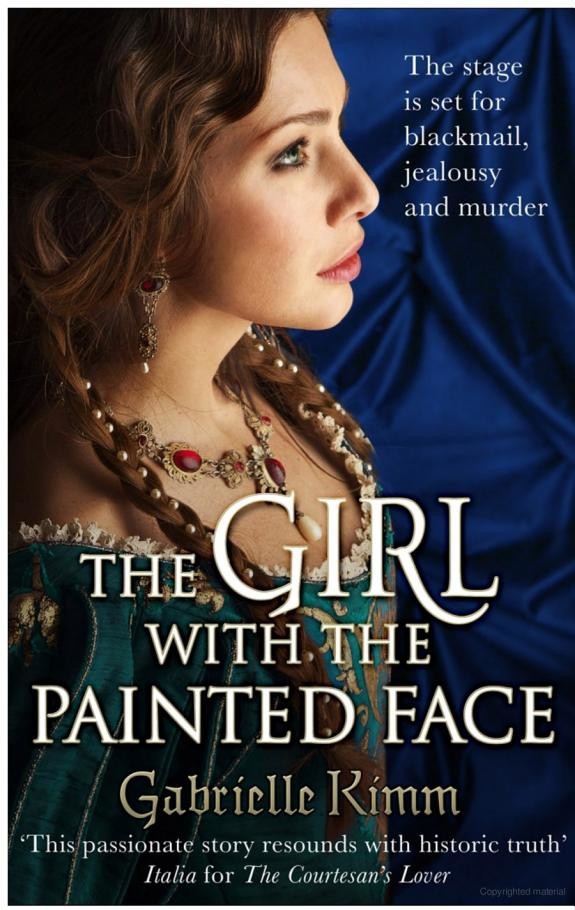 Gabrielle Kimm is the author of
His Last Duchess
and
The Courtesan’s Lover
, also published by Sphere. She lives in rural West Sussex, and teaches English part-time at a small performing arts school.

The Girl with the Painted Face

For Katy and Beattie

‘Good my lord, will you see the players well bestowed? Do you hear, let them be well used; for they are the abstracts and brief chronicles of the time.’

I owe a huge debt to Pete Talbot and his wonderful modern Commedia troupe – the Rude Mechanical Theatre Company. Pete truly brought the traditions of Commedia dell’Arte alive for me in a way no book could possibly have done and I’m not sure I could have written the book without him. Thank you to Rebecca Saunders and Louise Davies for their tender care of my story and to the rest of the Little, Brown team. Thank you as ever to Judith Murray. Thanks to Annie, Chloe and Loree – your feedback is always spot on and apposite. I don’t know what I’d do without you three!

The Castello della Franceschina, a few miles outside Bologna, October 1582

Sebastiano da Correggio does not anticipate the blow to the back of the head which will end his life. Steadying himself against the bedpost, giddy from too much wine and with a bright bruise flowering along the edge of his jaw, he is laughing as he bends to pick up his dropped doublet.

The blow, when it comes, is hard and fast and heavy. The base of the iron candlestick hits him and he crumples onto the floor of the study without a sound, though the fingers of his right hand twitch for a moment before they are still.

Sofia ducks into a narrow alleyway, banging her shoulder hard against one wall as she skids around the corner.

‘Come back here, you thieving
bitch
!’ The voice is hard, and gritty with anger.

The blow to her shoulder is painful – Sofia gasps and swears – but she does not slow her pace. Kicking over a basket of apples as she swerves past an old woman seated on a doorsill, she shouts a breathless apology. She jumps over a sleeping dog and runs down a narrow flight of steps, taking them two at a time, her skirts bunched in her fists. At the bottom of the flight she stumbles, falls forwards and lands heavily on her hands. A sharp pain shoots through one of her fingers. Scrambling back onto her feet and bundling her skirts up in her arms again, she checks over her shoulder, then, taking a sharp left turn, runs flat out now, across a wide and crowded piazza, her breath heaving painfully; she zigzags between stalls and carts and the grasping hands of market-goers eager to become involved. Her hair is falling about her face and between her teeth and she spits out a mouthful, flicking her head to one side and the other, but she dares not release her hold on the fistfuls of skirt in case she trips. Dodging the outstretched arm of a smirking poultry-seller, Sofia races away from the piazza, pausing for a fraction of a second to check her options.

Another narrow side street or the long Via Bologna?

She takes the side street.

Two paces up, though, she sucks in a shocked breath as the thick-necked man with the heavy belly appears at the far end – less than a hundred paces from her.

Red-faced, mouth a rectangular hole, he points at her. ‘There she is, the little whore!’ He begins to run towards her, heavy-footed, hands now fisted. Several other men follow him.

Sofia doubles back out of the street, half crying now, dragging in a dry, breathless sob at every pace. A few yards up the Via Bologna, a narrow, pointed-arched vault leads into another dirty-looking alley; she scrabbles around the corner and into the shadows.

A door stands ajar. She flings herself at it, opening it wide; then, slipping in behind it, she pushes it shut, leaning up with her back pressed hard against it, mouth open, chest heaving. Her breath is ragged and rasping, her throat close to tearing at each gasp. Her heart is pounding so wildly she can feel it in her neck, her ears, her face; her damaged finger is hot and pulsing. She holds the sore hand up against her bodice, and rakes the other through her curls, scraping her hair back from her face. The sweat that has gathered inside her tight bodice feels suddenly chill now against her skin; a cold trickle runs down between her breasts.

‘Now what?’ she mutters in between breaths. ‘What… in the name of heaven… do I do now?’

A head-high pile of baskets stands just inside the door in a dark, stone-flagged passage. Taking a step forward in the gloom, she bumps up against the pile, and it falls, teetering for a second and then tumbling slowly to land with a muffled crash. The top two baskets break open and half a dozen cabbages roll away down the passage.

A shout thuds out in time with the speaker’s heavy footsteps. ‘This way! I’m sure she came this way!’

Sofia holds her breath. Eyes wide, still breathing through an open mouth, she presses herself flat against the wall behind the door. She’ll fight, if they come in.

But nobody comes and within seconds the cries and the footfalls fade.

She waits for several more pulse-loud minutes. Then, easing the door open, she peers out into the alleyway.

Glancing to left and right, she takes a tentative step outside.

A big woman with a round, flat face like a plate glares at her from the next doorway. ‘Who are you? What are you doing, sneaking like that out of Signora Martello’s house? I know she’s not at home.’

Sofia thinks fast. ‘She’s my aunt,’ she says, smiling brightly. ‘I saw her in the piazza just now, and she asked me to tidy up the baskets in the passageway there – all those damned cabbages! She’s too busy this morning to do it herself. Bless her! So sorry if I worried you. Thank you, signora –
addio
!’ Ignoring the woman’s blustered response, she turns on her heel and walks as fast as she can without actually breaking into a run, until she reaches the corner. Looking back, she waves farewell, then turns the corner and speeds up.

Some twenty minutes later and well over a mile further east, Sofia finally slows her pace. The Piazza Vecchio is crowded and noisy, and she moves gratefully into the anonymity of the bustle of market-goers, resisting the urge to glance over her shoulder as she weaves her way between stalls and shop fronts. Reaching a flat cart, untidily laden with misshapen loaves and sweetmeats, she edges her way through the throng of market-goers to stand next to two large, well-dressed women who are busy haggling with the baker.

‘Oh, no, no, no, Domenico Rossi, you must be having a joke at my expense!’ The larger of the two wags an accusatory finger at the flour-dusted and weary-looking man behind the stall.

He raises both hands, palms up like a priest at the offertory. ‘Signora Bellini, I would never,
never
even
dream
of doing such a thing – to you or to anyone.’

Shaking her head, the woman says, ‘To charge a king’s ransom for such a paltry specimen of a loaf – just look at it! You might as well charge for bags of dust swept off the floor of your bakery.’ She picks up the offending article and shakes it at the baker.

As the baker reacts angrily to this, leaning out and snatching his bread back from his angry customer, Sofia edges back behind the two women and walks away towards where several dozen people have clustered together, facing something or someone she cannot see. Whatever they are watching is clearly entertaining them: several men are jeering loudly, and most people are laughing. Curious, Sofia sidles through to the front.

A slight, grey-haired man, dressed in a shabby black doublet and breeches, is standing on an upturned half-barrel, a tall black hat perched on the back of his head. In his outstretched hand is a red bottle, tightly corked and neatly labelled, and on the floor by the barrel, a wooden box stands filled with similar bottles.

‘… and here,’ he is saying, ‘just as I have described to you all in so much
glorious
detail, is the very stuff itself. Right here. Never again need any of you gentlemen go through the inconvenience – nay, that word simply will not suffice to describe the shame of it: let us say rather
the ordeal
,
of facing your wife with… how shall I put it?…
the contents of your codpiece
failing to
leap into action
as you have been hoping it will…’ The man waggles his eyebrows, gesturing as he speaks with the bottle and a jerk of his hips.

Whoops and catcalls from the crowd.

‘Never again will you have to experience the
shame
of watching it
wilt
like a tired fig-leaf…’ He allows the bottle to droop dramatically to the horizontal.

Someone shouts, ‘You’ve probably just pissed in that bottle, you old fraud. That’s all there’ll be in it!’

More laughter from the crowd. Sofia glances from one face to another, enjoying the spectacle.

The mouth of the man in the black doublet has dropped open in theatrical outrage. ‘How dare you! I’ve just told you what’s in here!’ He shakes the little bottle in the direction of the man who shouted. ‘
Arugula
seeds, basil,
cilantro
, liquor from the finest oysters…’

Someone else takes up the cry, interrupting the litany. ‘He’s right, all those things might well be in there… but you probably just ate the stuff yourself and then pissed into the bottles!’

Stars of David by Abigail Pogrebin
The Other Side of Someday by T. K. Leigh
Mortal Remains by Margaret Yorke
Mistress of Justice by Jeffery Deaver
An Astronaut's Life by Sonja Dechian
Dark Angels by Grace Monroe
Collision by Jeff Abbott
SilkenSeduction by Tara Nina
Davie the Mage (Generations of Eredwynn Book 2) by Daniel B Harris
What He Sacrifices (What He Wants, Book Fourteen) (An Alpha Billionaire Romance) by Ford, Hannah
Our partner