Read The Girls in the Woods Online

The Girls in the Woods 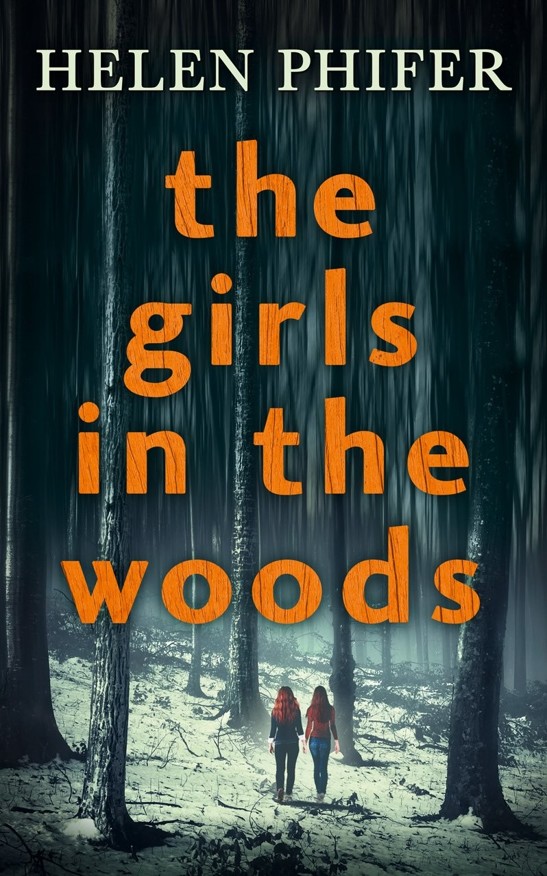 Don’t go into the woods. Because you’re in for a big surprise…

In an old album there is a beautiful Victorian photo that captures three young sisters, staring silently at one another. Only the trained eye can see the truth hiding in plain view. One of the sisters is already dead.

Annie Ashworth is currently off duty. With her baby bump growing fast, she is under strict instructions to stay away from police work and look after herself, especially as she has a history of leading danger right to her door. So when her police officer husband, Will, is called to the discovery of a skeleton buried out in the local woods, Annie tries to keep out of the investigation. But as another body is discovered and her own niece suddenly goes missing, staying away just isn’t an option.

As Annie is soon to discover, a picture really does tell a thousand stories. But which one leads to a killer?

‘If you haven’t read any of the books in this series yet, you don’t know what you’re missing!’ –
Splashes into Books

‘
The Ghost House
is the most exciting book I have read in a very long time, and would make an absolutely perfect Halloween read! Amazing début from Helen Phifer and I eagerly await more from her!’ –
Judging Covers

‘It was an atmospheric, spooky read, ideal for the season.’ –
I Heart Reading

‘The story constantly kept me on the edge of my seat.
The Ghost House
is a magnificent read and it's perfect for those who have a strong stomach and nerves of steel!’ –
Librarian Lavender

‘I really found my heart thumping through some of the passages, and I blame Helen for sleepless nights when I was wondering what would happen next!’ –
Amy
(Amazon reviewer)

‘I was really impressed by this book. … I was amazed how the author got inside of the mind of the serial killer and really showed you his psychotic thought processes.’ –
Elder Park Book Reviews

‘The twists and turns are fascinating.’ –
A J Book Review Club

‘If you love paranormal and crime novels, then this series is the one for you! But not only that, Helen also manages to grip you from the start, with romance thrown in and a lot of suspense. The stories jump from past to present throughout which shows incredible storytelling as you do not get confused by this once, it really adds to the storyline.’ –
Nikki xoxo
(Amazon reviewer)

The Secrets of the Shadows

The Girls in the Woods

lives in a small town called Barrow-in-Furness with her husband and five children. She has lived in the same town since she was born. It gets some bad press but really is a lovely place to live, surrounded by coastline and not far from the Lake District, where she likes to spend at least one of her days off from work. She has always loved writing and reading and loves reading books that make the hairs on the back of her neck stand on end. Unable to find enough scary stories to read, she decided to write her own.

This year has been an incredibly tough one for not just my family but so many others. I’m very touched and inspired by the amazing work of the wonderful, beautiful, inspirational ladies of the Lookin GOOD and Feelin GREAT charity group. These amazing ladies are all fighting or have fought cancer. In fact, they are not just fighting it but indeed kicking its arse and still managing to raise money for charity and give each other the support that anyone suffering from this dreadful illness so desperately needs. If there’s one thing this year has taught me it’s that you never know how strong you can be until you’re faced with no other alternative.

I’d also like to thank my lovely editor, Victoria, for putting up with me this year – it hasn’t been easy – and the rest of the team at Carina UK.

Once again huge thanks to my friends Sam, Tracy, Tina, Caroline, Gail, Phil and Iain, for your support and making me laugh at times when we really should be tearing our hair out. Sam, I haven’t forgot about the mouse incident and it will appear somewhere along the line.

Thank you to the very funny Heath Tyson who wanted a bad man named after him. I just wanted to say that the real Heath Tyson is nothing at all like his evil counterpart.

I’m for ever indebted to my lovely blogging friends, The Write Romantics. You all keep me sane and understand how tough it is once you’ve made your dream come true. Thank you so much Jo Bartlett, Julie Heslington, Jackie Ladbury, Lynne Davidson, Helen Rolfe, Alex Weston, Deirdre Palmer, Sharon Booth & Rachael Thomas.

Last but not least I’d like to say to my family that I love you all very much. It’s been a hard year but the Phifers have proved how tough and strong we are. Without you none of this would be possible and I’m so proud of you all.

The smell was always the big giveaway – no matter how many fresh flowers were placed around a room, the stench of decomposition would always seep through the cracks. Maybe not at first because the sweet scent from the roses or sweet peas, dependent upon the season, would infiltrate your nostrils with their heady fragrance, but after a few minutes you would realise that the underlying, more cloying scent wasn’t such a fragrant one after all. In fact you would more than likely wonder which flower it was that was giving off the almost too sweet, sickly smell. The black cloth covering the large ornamental mirror above the fireplace confirmed what you already knew. That this was a house of death. Upon further investigation as you looked around the room at the waiting subjects one would always stand out just that little bit more than the others; it was always the hands that would give them away. Those petite hands that had once been ivory coloured were now mottled purple and black. The rest of the body, underneath the layers of petticoats, pinafore dresses and thick tights, was probably turning the same colours – but the face you could disguise, if you worked your magic with the thick, heavy, cosmetic face powder.

The three girls were all dressed in identical long white nightgowns; the only flesh showing was their hands, necks and faces. He smiled at the two that were hovering to the side of their dead sister looking uncomfortable; he wouldn’t want to have to stand next to a dead person and smile for the camera even if it was his brother. The dead girl was on her own, standing tall in the middle of the room. He tilted his head to see if the heavy, black stand that was holding her decaying body upright could be seen but it was well hidden underneath her nightgown. Although her eyelids were closed someone had drawn open eyes on her lids so she looked as if she was still watching everyone. A life-sized, human doll that would probably be the cause of many years of nightmares for her siblings. Her mother was in the opposite corner being comforted by a much older woman. Both of them dressed all in black. He cleared his throat.

The girls stared at each other, both of them holding hands. It was the older woman who nodded her head. He set his tripod up and placed the heavy camera onto it; a couple of photographs and he would be done. There was a certain beauty about death that he found very attractive but he had never told anyone this; it wouldn’t be the right thing to do or say. His wife would be mortified at the thought of him enjoying photographing corpses; she hated that he did it for a living anyway, but if she knew he enjoyed it she would make him stop.

‘Mabel, Flora, go and stand either side of your sister.’

He felt a little sorry for the girls, who both looked as if they were about to burst into tears. They were looking at each other and still holding hands.

‘Now, please. If you continue to fuss about it the longer it will take – what on earth is wrong with you both?’

Mabel looked the oldest out of the three of them; she implored Flora with her eyes. He folded his arms across his chest and watched them. Mabel stepped forward pulling the younger girl, who let out a sob.

‘Please don’t make me touch her; she’s cold and she smells. I’m scared – I don’t want to stand next to her. Why do we have to do this?’

Her mother looked up from her crumpled handkerchief, surprised by her daughter’s outburst of insolence. She didn’t need to speak because the girl’s grandmother walked across and slapped Flora across the face.

‘Stop that at once, child – that is your sister, not some stranger from the street. It is the very last chance your parents have to get a photograph of you all together. Now you will stand next to your sister and smile for the camera before she is taken away and buried.’

The girl stopped speaking but her hand came up and began to rub at the red finger marks that had appeared on her pale, perfect skin. She let Mabel take hold of her shoulders and position her next to the dead girl, then Mabel took her position on the other side. Neither of them looked at their sister. He put his head underneath the cover to take the picture but it was no good. Those red marks on her cheek would stand out on the still when it was developed and it wasn’t as if he could arrange to come back and do this all over again; he only had this one chance to get it right. He lifted his head up and walked across the room, taking hold of Flora’s shoulders.

‘I’m sorry but the mark on your face is too prominent, I need you to turn and face your sister. I promise I’ll be quick and you won’t have to stay there for very long.’

He didn’t think he’d ever forget the look the young girl gave him then; obviously this was a huge ordeal for her. This must be her first brush with death and an experience that would no doubt stay with her for the rest of her life – but her parents had made it quite clear when they asked him to call around yesterday. They could only afford to pay for two stills so he couldn’t make any mistakes; these two pictures needed to be perfect. He gently turned her to face the dead girl and could feel her entire body shaking; he then went to Mabel and turned her in a similar position so they were both staring at their sister with what he hoped would be assumed was loving attention and not abject horror. He then went back to his camera and buried his bead back underneath the cloth. Holding up the flash he snapped first one, then another still.

Devil in the Wires by Tim Lees
Rendezvous With a Stranger by Lizbeth Dusseau
One Night in the Outlaw's Bed by Jenika Snow
The Future We Left Behind by Mike A. Lancaster
Guardianas nazis by Mónica G. Álvarez
Something Might Happen by Julie Myerson
Dead on Arrival by Lawson, Mike
Die a Little by Megan Abbott
The Dawn of the Raven episode 17 by J.L. Blackthorne
Wait Until Tomorrow by Pat MacEnulty
Our partner