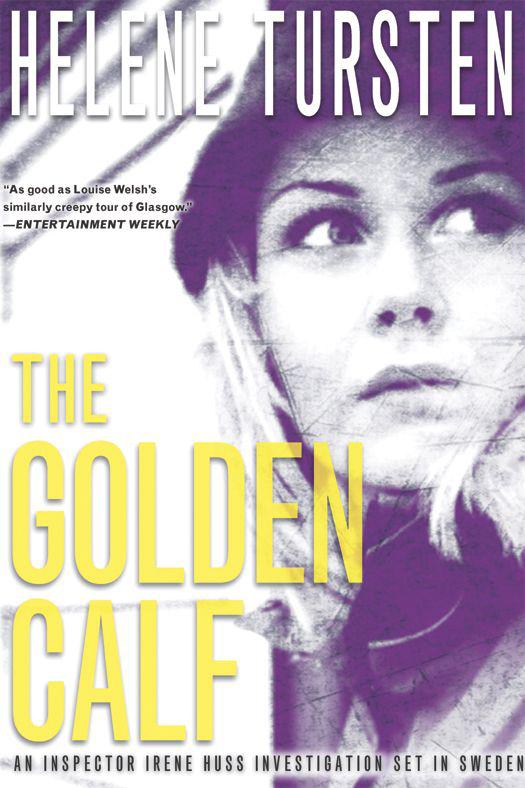 Originally published in Sweden, as Guldkalven, in 2003

To my sister Pia

F
UZZY IMAGES FROM
the bank’s security cameras flickered across the TV screen. Three masked men were aiming weapons at customers and employees inside the building. The robbers wore dark overalls, black ski masks, and black gloves. Only their eyes were visible. Behind the counter, one of the men threw a large nylon bag at a cashier. A customer lay prone on the floor in the middle of the room while the second robber aimed a rifle directly at his head. The third armed man was posted near the entrance, his back to the camera. He kept glancing nervously in all directions. Then, in the upper corner of the picture, the glass door opened, emitting two spindly legs in calf-high leather boots. The robber at the entrance stepped forward and pulled an elderly woman into the frame. He spun her around by her arm, and she lost her balance and fell.

The movements of all three robbers were jerky, since the camera recorded footage in short sections in order to save film. Nevertheless, it was obvious that the robbers were becoming increasingly nervous. The man behind the counter was making threatening gestures at the cashier, who filled the bag with bills as fast as she could with shaking hands. The masked man seemed to become irritated as something shifted near him, and he hit the cashier across the mouth with the rifle barrel. She fell to the floor, out of sight.

“… these
BRUTAL PICTURES
from inside the bank building.” The female newscaster’s well-modulated voice issued from the speakers of the wide-screen television. “A fourth man was waiting outside in a getaway car, a red Saab 9000, according to one witness. A similar car was reported stolen in Arvika a few hours earlier, which the police suspect was the same vehicle. A nationwide alert has been issued. The elderly woman seen in the video suffered a broken hip, and the cashier lost several teeth; both women have been admitted to the hospital. The hostage and remaining bank staff have received help from a crisis team. It is believed that the robbers got away with more than a million kroner. This is the fourth-largest bank robbery in northern Värmland this year, and so far there have been no arrests. The low police presence in the area may be why the criminals targeted this bank. Often, the only police car in the area may be more than twenty miles away, which delays response time.”

“S
UCH ANIMALS,” THE
man sitting on the sofa growled as he clicked off the television. There was a moment of silence after the picture faded.

“How horrible!” The man’s young female companion laughed nervously. “Can you believe he was pointing that rifle right at her head? She must have been terrified!” She paused as the man filled her wine glass, then she continued, “But honestly, Philip, one million kroner. That’s not bad at all. It’s probably the easiest way to get hold of a lot of money fast.” She giggled as she sipped.

“Too dangerous. You could be shot and killed.”

The man lifted his glass to his nose and inhaled slowly, enjoying the aroma.

“Mmm. Sun-ripened blackberries with a hint of vanilla. Hope they catch those guys and throw them in the slammer. And let them rot there, I say,” said the man who had embezzled a hundred million dollars.

D
ETECTIVE
I
NSPECTORS
I
RENE
Huss and Tommy Persson parked on the street between a blue-and-white patrol car and the anonymous car of the forensic technicians. The garage entrance had been blocked off by a sloppily parked silver Mercedes Cabriolet, its top raised.

The detectives hunched their shoulders against the harsh sea wind as they walked toward the front door. The house was brand new, but the surrounding grounds were nothing but clay and mud. One step off the stone pathway and a shoe would be sucked off by the muck. Despite the lack of landscaping, Irene saw that the location of the house was fantastic, high on a hill with a magnificent, wide-open view of Askim Bay. How could anyone afford property like this? The villa itself was all terra-cotta brick and huge panes of glass. Obviously the architect had spared no expense.

Tommy stopped to take a good look at the Cabriolet. He gave a silent whistle and sent Irene a meaningful glance. They continued to the front door and rang the bell. A female officer opened the door immediately. She looked young and serious.

“Hi. I’m Tommy Persson, and this is Irene Huss from Violent Crime.”

A baby was crying inside the house. Stina glanced nervously in that direction. “It’s the baby,” she explained. “Their
baby.… His wife found him … her husband … when she got home.” Stina’s cheeks were pale, and she was obviously struggling to control her discomfort. A murder would rattle anyone, but everything was much worse when children were part of the picture.

A tall policeman in complete protective gear appeared in the spacious hallway. Both Irene and Tommy knew Criminal Inspector Magnus Larsson well and were happy to see him. As Irene and Tommy pulled on their own protective overalls, hats, plastic gloves, and booties, Magnus gave them the rundown.

“A woman called 112 and said she’d found her husband shot. We arrived within fifteen minutes of the alarm. She was calm at first, but she broke down after a few minutes. She had her mother’s telephone number programmed into her cell phone, so I’ve called her. Someone has to take care of the child. Her mother is on the way, but she was in Borås when I reached her.”

The names felt vaguely familiar to Irene, but she couldn’t place them. She noticed that Tommy also reacted to the names, but before Irene could ask, loud shrieks from an unhappy baby echoed through the house. All three police officers hurried toward the noise.

The living room was large, with a huge glass wall facing the sea. Irene had been right—the view was fantastic. A young woman sat hunched in a round swivel chair covered in leather the color of eggshells. Eight identical chairs ringed an elliptical glass table, which sat on a matching shag carpet, which popped against the dark terra-cotta tile floor. Oversized modern oil paintings stood out against almost-pure-white walls.

Irene and Tommy nodded at two uniformed officers standing beside the woman, before taking a closer look at the unmoving figure curled in the chair. Irene realized she had seen the woman’s face before. Again, she had no idea where or when.

Sanna Kaegler-Ceder stared into space with empty eyes. Her pale complexion and stiff expression made her face seem mask-like. At her feet was an infant in a blue corduroy baby bouncer. Irene guessed the baby was, at most, six months old. He was screaming, his face bright red from the exertion.

The glass wall continued to another doorway leading to an octagonal room enclosed in glass. In the center was a spiral steel staircase to the second floor. Sanna Kaegler-Ceder’s husband lay on his back at the foot of the stairs. The two technicians near him were setting up their camera equipment. They nodded to Irene and Tommy.

“We need fifteen minutes,” the older of the two said.

“Hello,” Irene said softly. “My name is Irene Huss. Do you think your baby might want something to eat?”

The woman’s only reaction was a slight flutter of her eyelashes.

Irene sighed and picked up the wailing bundle of a baby. A noticeable odor cried out for a diaper change.

“Come on, Tommy. Help me find the changing table and some baby food,” Irene said with determination.

“It hasn’t been that long since you changed your own baby’s diapers.”

“You’re right. OK, off to find a dry diaper.” Tommy made a raspberry sound and tickled the baby’s tummy. The baby interrupted his crying to peer up at him.

After a few minutes of opening and shutting doors, they found a large bathroom with rose marble walls. There was an enormous changing table, complete with every possible item for baby care. The baby wore a soft denim romper suit and a light blue sweater with
MADE IN NEW YORK
written in flashy silver across the chest. As Irene lifted him from the table, his bottom dry, he began to fuss again. His hunger was making itself known.

Tommy had already gone to find the kitchen. When Irene, carrying the baby in her arms, followed, Tommy held up a bottle he’d found in the refrigerator in triumph.

“Hey, buddy! Now you’ll get some grub!” Tommy said as he began to heat the bottle in the microwave.

On the counter was a plastic bottle top, which Tommy screwed in place with a practiced motion. He instinctively checked the milk’s temperature against the inside of his wrist, then handed the bottle to Irene. Even though it had been years since his youngest child’s last bottle, the preparation routine came back quickly.

Irene looked down at the baby, who was greedily sucking down the milk. The ultra-modern kitchen glistened in glass and brushed steel. Irene looked for somewhere to sit down, but there were only tall stools next to a bar counter. Irene leaned against one of the stools as the little boy noisily slurped the last drops. Then she lifted him to her shoulder and patted him on his diapered bottom. A huge burp was her reward.

“Huss, now your jacket will look like a seagull pooped on it.” Tommy grinned. He found a roll of paper towels on a steel cylinder and helped Irene rub off the milk stain.

As they walked back to the living room, the baby fell asleep. Irene set him back into the baby bouncer and spread a soft, yellow blanket from a nearby chair over him.

Sanna hadn’t moved. She appeared catatonic. She wore light-brown pants and a cobalt-blue top with a deep décolletage.
Between her breasts glittered a large cross with closely set white and blue gemstones. Their crystal clear sparkle could hardly have come from anything other than authentic sapphires and diamonds.
Sanna Kaegler-Ceder walks around with a fortune around her neck
, thought Irene.
And her reserve capital is on her left ring finger
.