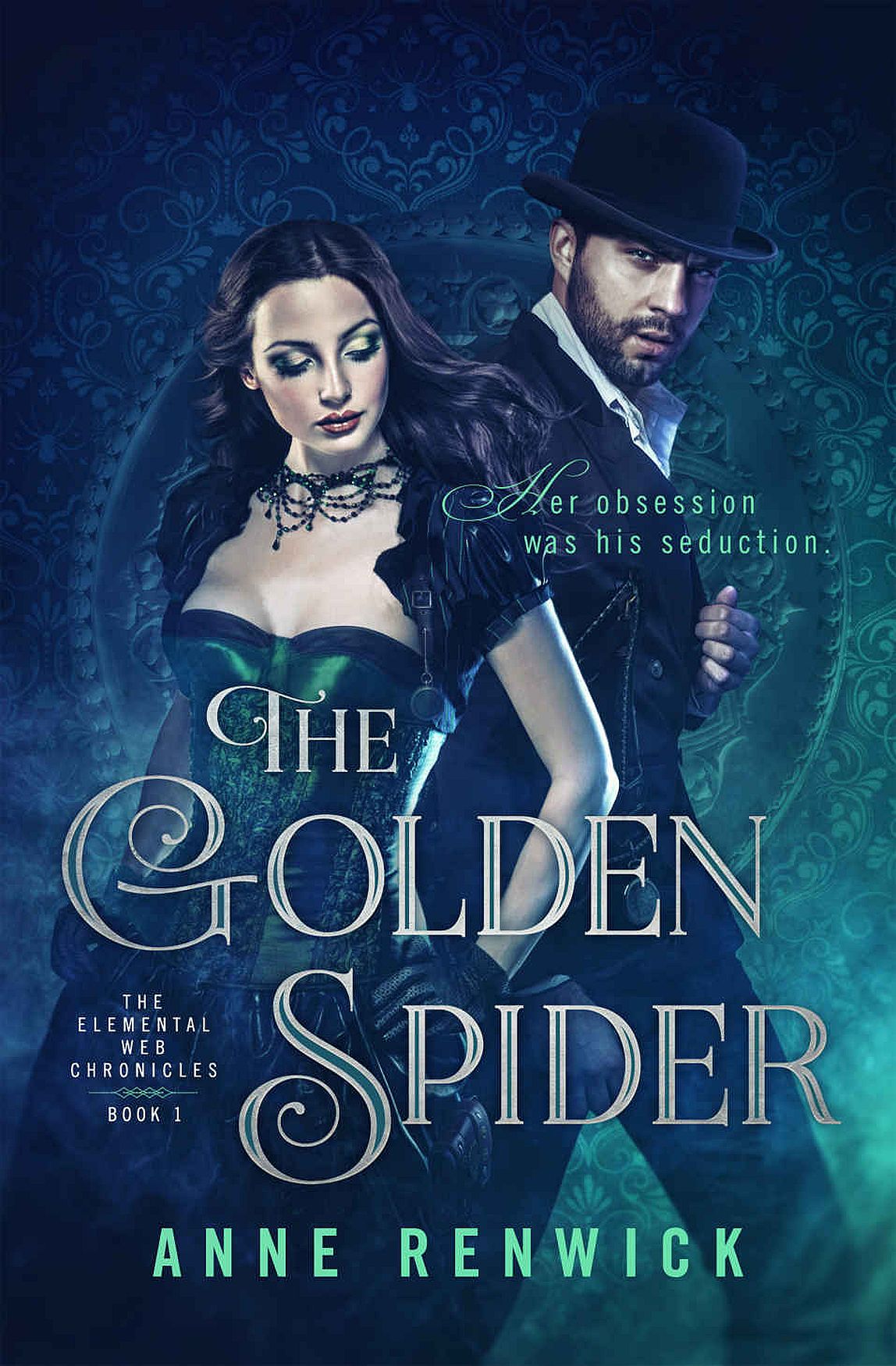 The Elemental Web Chronicles‌—‌Book One

T
HE HONOR OF WORKING
for the Queen as a spy was overrated.

Crouched behind a burned-out steam carriage, Sebastian Talbot, the 5
th
Earl of Thornton, tapped on the acousticocept wrapped about his ear. The device should have worked up to a half-mile distance. He squinted through the gloom of the riverside fog. Hell, he could still see their agent. He just couldn’t hear him.

“No signal,” he hissed to the man beside him. Would they ever manage to make this damn device work in the field?

“Repairs.” Thornton pointed across the field of rusting scrap metal before them to a derelict water boiler just large enough to conceal both men in the dark of night. “There.” After years of working side by side, the two men could almost read each other’s minds.

Black nodded and they ran forward, tracing a winding path through piles of discarded machinery in an attempt to melt into the odd shadows the metal cast. Their agent was no more than fifty feet away, but Thornton still couldn’t hear the conversation between Agent Smith and his informant. He threw Black a questioning look, but the man shook his head. Nothing.

Thornton bit back a curse. They couldn’t approach Smith without blowing his cover.

Black ripped the acousticocept from his ear and twisted its dials in vain trying to increase reception. The light continued to blink red. Either the agent’s artificial ear had failed or there was some fresh blunder with the receiver.

Thornton ran through the schematics in his mind. The aether chamber inside the agent’s ear was sealed. Tests had proven that in the laboratory this afternoon. The next logical weak point was the needles contacting the counter rotating disks in the acousticocepts. They had a tendency to dislodge.

He wanted to growl in frustration. Henri should have fixed that problem by now. The device should be beyond field trials. They should have been sitting in a steam coach listening to the informant’s tale in complete warmth and comfort, not running about a scrap yard straight from a debriefing at the opera and risking discovery in blindingly white shirts, snowy cravats, and well-tailored coats. Thornton kept a hand tightly wrapped over his silver-capped cane lest it reflect some stray ray of light and draw attention like a bioluminescent beacon.

And his leg was sending out pangs of warning. Damn sky pirate and his cutlass.

Thornton ignored the radiating pain. He pulled a cigarette case from his coat pocket as he stepped behind the metal tank. He raised his eyebrows at Black. Smith believed his informant finally had a solid lead. If Thornton didn’t attempt field repairs, he and Black would be reduced to simple observation. Too many carefully woven plans had unraveled of late, and he did not relish the thought of delivering yet another report of failure to his superior.

Black nodded and angled his torso to further block any view of Thornton’s activities. Flipping it open, he activated the small decilamp‌—‌its light a necessary risk‌—‌and selected micro-tweezers from among the various tools within. There was a chance he could reset the needles of the acousticocept before the agent moved to follow the informant’s lead.

His cold fingers fumbled. Gloves. He’d been about to return for them when he’d spotted a determined mother steering her debutant daughter into his opera box. Discomfort, no matter how biting, was preferable to becoming trapped in such a snare. Warmth had been abandoned in favor of freedom.

Black shifted closer as Thornton pulled his acousticocept free and placed it on a steam gauge protruding from the boiler. Thornton flipped a monocle over his eye and, with only the faint blue-green light to illuminate the needles, set to work.

As always, the world about him faded as he untangled an experimental conundrum.

Moments later, the light glowed a steady green. Success, but no satisfaction. He’d uncovered yet another internal defect. Tomorrow, he would sketch out modifications to solve this issue once and for all. He handed the device to Black and set about fixing the second one. Hooking the working acousticocept once again about his ear, Thornton was drawn into the distant exchange.

“…‌but how is the eye doctor making contact with the gypsies?” Smith asked.

The ragged informant shrugged. “I want nuthin’ more to do with this so-called doctor. Got me two young’uns, I do. Can’t be found floating down the Thames.” He turned away.

But the informant had already disappeared into the night.

There was a crunch of shoes on gravel. A soft splash followed. Then Smith spoke as if to himself, though the information was directed to them. “I’m going to investigate.”

Thornton glanced at Black in question. The man shook his head. Because of the malfunctioning device, they’d missed a crucial piece of information.

Rising from behind the boiler, he caught sight of their agent‌—‌but not his informant. Smith had climbed into a boat and was rowing down the Thames. Risky, with the Thames’ kraken population on the rise. But as long as Smith hugged the shoreline and avoided storm pipes, he might reach his destination‌—‌whatever that was‌—‌before the smaller kraken swarmed and sank the boat.

But where did that leave them? There was no way to flag down Smith without compromising him. He sagged against the boiler in frustration. At this dark and foggy hour the usual clamor of steam engines, sailors’ calls and horns was muted, and through the acousticocept, he could hear the sound of waves lapping at a boat’s hull.

So much for simple surveillance.

“There’s a dock not far.” Black glanced at Thornton’s leg. “Can you make it?”

He narrowed his eyes. Such concern was unnecessary. For now. “I can make it.”

“Or go down trying,” Black retorted.

Before Thornton could snarl an appropriate response, Black was off and running. Using his cane to counterbalance his awkward gait, he followed across the mud and rock of the riverbank, cursing as he stepped on a decaying kraken carcass and nearly lost his footing. The beasts were everywhere, the stench from their decaying bodies rising to fill his nostrils.

By the time he reached said dock, Black was already casting away the ropes. “Hurry up, old man.”

Thornton leapt into the boat, and a lightning bolt of pain shot through his leg.

As Black rowed in pursuit and shook free the occasional tentacle that hooked an oar, Thornton unscrewed the silver head of his cane and pulled a glass vial as well as a needle from within. With practiced movements, he fitted the vial with a small needle. Yanking a pant leg above his knee, he injected the contents.

Instant relief. He dragged in a deep breath and shoved the empty vial into his coat pocket.

Thornton reassembled his cane and gave a terse nod. As the tension melted from his muscles, he scanned the water for their man. “There, by the warehouse.”

The drug’s effectiveness wouldn’t last. Once, a single dose had dulled the pain for an entire month. Now he needed to administer the drug daily. It was time to curtail his field duties further. Perhaps eliminate them altogether. Before an agent fell victim to his injury.

A bitter pill to swallow for a man in his early thirties.

In the distance, Smith effortlessly dragged the boat ashore and ducked inside the brick building. His footsteps echoed in Thornton’s ear.

“There’s a light,” the agent whispered. “A faint tapping.”

There was a rustle, the sound of a coat being pushed aside and the scrape of a weapon drawn. The agent screamed. An agonizing sound that had both Thornton and Black gripping their ears. An altogether too brief scream that ended with a gurgle. There was a loud crunch followed by telling static.

Though he and Black wore the acousticocept listening devices coiled about their ears, the transmitting device, the acousticotransmitter, had been implanted deep
inside
Smith’s ear.

Pulling on the oars, Black beached the boat onto the muddy, trash-laden shore. They ran to the building. Not a single glimmer of light escaped its tall windows. Thornton yanked on the rusty door handle. “Locked.”

“Stand back,” Black ordered, then kicked the door open, entering with Thornton at his back. Both held their weapons at the ready.

Nothing but silence and their agent, sprawled on the ground‌—‌a faint trickle of blood oozing from his ear around a protruding stiletto blade‌—‌met their entry.

Thornton clenched his jaw and bent over. He avoided Smith’s vacant eyes as he pressed fingers to the agent’s throat in the unlikely event that he might find a faint pulse. Nothing. He looked upward, his gaze drawn to the other horror in the room.

Black had flicked on his bioluminescent torch. The cavernous riverside warehouse was filled with stacked wooden crates. In its center, over the delivery hatch in the dock that stretched out over the river, hung a block and tackle. Suspended from the iron hook by rope-bound hands was another man beyond rescue. Blood streaked down his face and neck, soaking the front of a saffron-colored shirt. Empty eye sockets stared down at them.

T
HE DAY BEGAN
much like any other day.

Lady Amanda Ravensdale, daughter of the Duke of Avesbury, took a bite of buttered toast and a sip of cold tea before returning her attention to the femur resting before her on the polished mahogany dining table. A practical examination approached, and she had her heart set on achieving a perfect score. She scanned its surface, murmuring anatomical terms. Greater trochanter, medial epicondyle, linea aspera‌—‌

A grinding of gears and a gentle bump against her chair drew her attention. “Thank you, RT,” she said to the steambot, lifting a china cup filled with fresh, hot tea. The roving table reversed course and whirred its way back toward the kitchens.

“Must you!” Olivia shrieked from behind her. “The horrors I endure each day as a member of this family. I will never forgive you for caving to such a base desire to mingle with the middle class in an anatomical theater. My sister in medical school. It’s a social nightmare.”

Amanda smirked at her sister’s tantrum and twisted in her chair. “And I will never forgive you for the hours I’ve lost enduring soliloquy after soliloquy about the difficulties of obtaining an ice sculpture come June.”

“I’ll have you know planning a proper society wedding is quite an undertaking.” Olivia pointed her nose in the air, and golden ringlets bounced about her face. “Carlton will one day be Viscount Bromwich.”

“Children,” Father warned from the end of the table. He lifted the morning paper higher. On the front page, headlines proclaimed the latest indignity: A German Imperial Fleet zeppelin had attacked what was, the British Navy insisted, a mere merchant’s vessel.

Black Magic (Howl #4) by Morse, Jayme, Morse, Jody
The Heart by Kate Stewart
Wrapped Up in Crosswords by Nero Blanc
Charlene Sands by Taming the Texan
Swap Out by Golding, Katie
The War of the Jewels by J. R. R. Tolkien
Play With Me (Pleasure Playground) by Gayle, Eliza
Echo by Alyson Noël
The New Year's Bride (Holiday Mail Order Brides Book Two) by Morgan, Kit
I Saw Her Standing There by Marie Force
Our partner