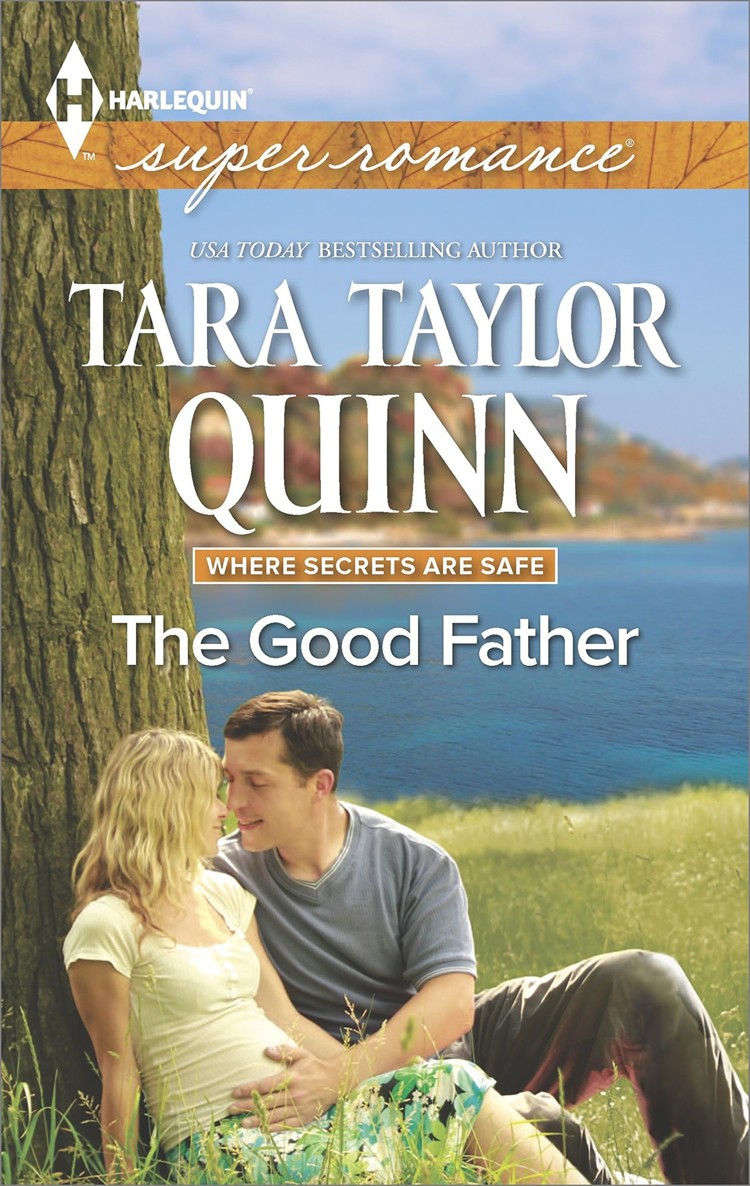 It seems a lifetime ago that Brett Ackerman wanted to share his life with Ella Wales. He really believed he could put his abusive family history behind him...until he realized it would always be part of him. Then he pushed her away.
Hard
.

Now Ella’s back as part of the High Risk Team at The Lemonade Stand, the unique women’s shelter Brett founded. And she needs his help with a family crisis. But even now, Brett can’t admit he still loves her. Until one night of passion with Ella turns Brett into the one thing he fears the most—
a father
.

“I thought you were asleep...”

Ella stood there, hands raised as though she didn’t know what to do with them.

God help him, Brett had been reliving the touch of her fingers on his skin since they’d arrived at the cabin last night.

Who was he kidding? He’d never stopped having fantasies about the woman.

He’d known he couldn’t be married to her. Had no doubts about that one. Even now his resolve didn’t waver.

But making love had never even come close to bringing out violence in him.

“I’ll just get us going again and head to shore,” she said. She turned and the light of the moon gave him a bounteous gift. A clear view of two things. Ella’s lips. And her nipples where her sweater had dropped open.

She was chewing on her lower lip. All the sign he really needed. But the hard points of her nipples were added fuel for his raging fire.

Both were indications that Ella was as hungry for him as he was for her...

Welcome back to The Lemonade Stand.
The Good Father
is a very special book in the Where Secrets are Safe series. It’s the story of a man who created his own safety net without knowing it.

If you’ve read any of the other books, you’ve heard about the mysterious founder of The Lemonade Stand, a unique women’s shelter set on the coast of California. We hear of him, of his generosity and his decisions. We just never meet him. We have no idea who he is. Nor do any of the people who work at or are associated with the stand.

Brett Ackerman is a man with secrets. A man with an atrocious past who limits his future rather than risk any more atrocities in his life. He is also that founder. He created something he’d wished had existed when he was growing up a victim of domestic violence. Stepping outside the story, I created The Lemonade Stand because I wished something like it had existed when I was a young newlywed unable to tell anyone what was going on behind closed doors.

I’m not Brett. But he and I have something in common. We both hid from our pasts, tucking things away, thinking we’d dealt with them, only to find that they’d been there all along. I hope you’ll give Brett a chance. Follow on his journey as he struggles to help a friend and finds himself in the process. I promise you warmth and happiness at the end.

PS As always, I love to hear from my readers! You can reach me at
[email protected]
.

The author of more than seventy novels,
Tara Taylor Quinn
is a
USA TODAY
bestselling author with over seven million copies sold. She is known for delivering emotional and psychologically astute novels of suspense and romance. Tara is the past president of Romance Writers of America and served eight years on that board of directors. She has appeared on national and local TV across the country, including CBS
Sunday Morning
, and is a frequent guest speaker. In her spare time Tara likes to travel and enjoys crafting and in-line skating. She is a supporter of the National Domestic Violence Hotline. If you or someone you know might be a victim of domestic violence in the United States, please contact 1-800-799-7233.

Where Secrets are Safe

It Happened in Comfort Cove

Visit the author profile page
at
Harlequin.com
for more titles.

For all those who have been hurt and want to believe in love and happiness anyway. It’s out there!

H
E STOOD NAKED
and felt the water splash over him. Eyes closed, arms raised with his hands splayed above him on the porcelain tile, Brett Ackerman dropped his chin to his chest. Water pressure that was fine for cleansing wasn’t strong enough to wash away the tension knotting the muscles along the back of his neck.

He stood there, anyway. Planned to let the hot water run out and then to remain in the cold for as long as he could take it. His pain was his own fault. He’d been out too late after several grueling days of work, flying back and forth across the country twice.

He’d been celebrating. Ten years since he’d sold the dot-com he’d started his junior year in college. A decade of his life had passed, and here he was. Standing alone in the walk-in shower in his elegant, historical, two-story walk-up across a quiet street from a flowered lot that led to the ocean beyond.

He owned the house. The lovely two acres across the street. And another house down the street, too, that was split up into bed-and-breakfast-type rooms that were all rented on an extended-stay basis.

He owned them both, and lived in this one, alone.

Just as he’d walked home alone from the quaint neighborhood pub on the corner in the wee hours of that Tuesday morning in September. Where he’d celebrated by nursing two cocktails over a period of several hours and playing video trivia games with anonymous opponents.

His life was on track. Exactly as he’d planned.

And that fact was worth celebrating.

His cell phone peeled, an urgent sound partially muted by the shower. It was only seven. He wasn’t due at the Americans Against Prejudice board meeting in LA until nine. His unscheduled tour of the home office facilities would follow immediately after. While the other board members were at lunch.

His phone continued to ring. Brett continued to stand under the shower—remaining strong against the temptation to pick up—stubbornly determined to relax.

As a nonprofit regulator—a self-made position that in ten years had grown into something approximating a national Better Business Seal of Approval designed to assure nonprofit donors that their monies were not being misappropriated—he was currently sitting on more than fifty boards around the country.

The phone fell blessedly silent, and Brett lifted his face to the soothing heat sluicing over him. Enjoying the moment.

Then his phone started to ring again.
Shit.
He’d made it through the first summons, but there was no way he could ignore a second, right on the heels of the first. At seven in the morning.

So much for a little naked relaxation.

E
LLA
W
ALES
A
CKERMAN
, RN, the brand-new charge nurse in the Neonatal Intensive Care Unit at Santa Raquel Children’s Hospital—a newly completed facility just outside Santa Raquel—was in the unit’s nursing office early on that Tuesday morning, going over charts and checking her email before her shift began. The thousand-bed facility had only been open a few weeks, and already they had thirty patients in their fifty-bed unit.

Thirty babies fighting for their lives.

She read chart notes from the night before. Saw that the little “ostomy” guy had coded again, but was stabilized. His liver was shutting down due to the nutrition they were forced to give him intravenously until they could do the surgery that would put his stomach back together. If they couldn’t keep him stable, get him well enough to tolerate the surgery...

He was stable. They’d do all they could for him.

“Ella?” She glanced up as Brianna Wood, one of her nurses, a twenty-eight-year-old transfer from San Francisco, stopped in the office doorway. “I know you aren’t on the floor yet, but I just wanted to let you know, we got word an hour ago that a new patient’s coming up from Burbank sometime this morning. A two-pound, six-week-old girl. I don’t know the particulars yet, just that she’s in a warming bed and breathing on her own.”

“Let’s put her in D-4,” Ella said. The pod was their least crowded and also one that, so far, had no patients with ventilators. They talked about the attending physician and waiting for orders, and then Ella asked, “So, did you talk to him?”

Brianna had been planning to ask her boyfriend to move in with her. Which meant leaving his job as a nuclear medicine technician in San Francisco to relocate to Santa Raquel. The long-distance relationship wasn’t working out well.

The woman wasn’t crying, but Ella could almost feel the effort it took Brianna to keep her emotions in check.

“You thinking about going home, then?” She’d hate to lose her. Not only were they still staffing, Brianna was a damn good nurse, too. But if she would be happier...

“Absolutely not. I love this job. And if he’s not sure now, my moving back isn’t going to make him any more so.”

There was a lot Ella could say about the importance of having a life beyond the man you loved, but she was the woman’s boss. And admittedly jaded where men were concerned. “He could change his mind.”

Brianna shrugged. “Maybe.” She looked hopeful for a moment. “Do you think I should? Go back?”

She shouldn’t answer that, either. “No.”

Brianna’s nod gave her pause. “But...if you want to go home, I’ll give you a glowing reference,” Ella added with a small smile. She’d never been a boss before. Was used to being just one of the nurses—someone who could offer personal advice and opinions without undue professional consequence.

The question on Brianna’s pretty face called out to Ella. She was new in town, too. And other than her sister-in-law, Chloe, who was living with her temporarily, had no one to confide in. Or even catch a movie with.