Read The Good, the Bad & the Beagle Online

The Good, the Bad & the Beagle 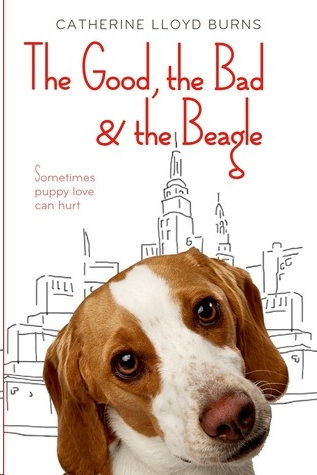 For Red Burns and Fanny Gennis

An Alphabet of Woes

A Chance for Success

God and the Cultural Jew

Sins Upon the Water

Things Are Really Looking Up

To Care or Not to Care

Goodbye, and Thank You for Inviting Me

The Center of Another Bed

Fake It Till You Make It

The Parting of the Red Sea

For the Love of Science

The Light at the End of the Hall

I’m Afraid to Tell You

In the Closet World

A Net Is There

Here, There, and Everywhere

An Alphabet of Woes

There was a patch of dry, scaly skin on Veronica Louise Morgan’s left middle finger that she hated. Scratching was useless because the itch was below the bone. The only thing that helped was rubbing her knuckle back and forth against the green carpet in her bedroom until the whole thing was numb. She’d been rubbing her finger this way for twenty minutes already and the clock by her bed read 7:05 a.m.

Today was her first day at the Randolf School for Girls.

She would never survive.

The sounds of the coffee grinder and the front door closing infuriated her. This meant her father had just brought in the newspaper and her mother was making breakfast. Didn’t the last day of their eleven-year-old daughter’s life deserve some kind of ceremony instead of business as usual?

“Honey, what kind of bagel do you want?” her mother called. Veronica rubbed her knuckle harder. Her family was incredible. Who could think of things like bagels at a time like this?

The rug burned through more layers of skin while the aroma of sweet, warm, yeasty bread wafting from the kitchen made Veronica’s mouth water. She pushed images of yellow butter collecting in foamy pools along the surface of a lightly toasted bagel right out of her mind.

“Sesame,” she called. Oh well. She might as well enjoy one last breakfast.

“What?” her mother called back.

Ordinarily, Veronica Morgan would be very happy to point out that her mother was the person doing the shouting, but this being the last day of her life and all, she didn’t have the wherewithal to fight. She had some sense of decency, unlike the people she lived with.

“Veronica, Daddy and I are
dying
to see you in your
uniform
! Hurry up!”

Oh God. How could she ever leave her room? The only advice the twelfth-grade Randolf tour guide had given her was regarding uniform length. The girl’s name was Lynn Dehavenon and Lynn Dehavenon said uniforms had to be seven inches above the knee. That was the protocol for girls who were cool and put together. She was very specific.

“Socially, it is the most important thing you can do,” she had said.

Veronica had rolled that pearl of wisdom around her mind all summer. With proper tailoring, cool and put together were just within reach. In fact they were only seven inches away. But children are not the captains of their own ships. Grown-ups are. The tailor and her mother were at the helm and they steered Veronica’s ship straight into an iceberg. The tailor convinced her mother that since Veronica was still growing it was necessary to leave the newly acquired Randolf uniform nearly as it was. In other words: not cool and not the least bit put together.

Here she was, the first day of her new life, her finger rubbed raw and her future capsized. Her parents said she was being dramatic. Oh really? Was it dramatic to mourn the end of your life? Veronica Louise Morgan thought not. She was the smallest Morgan, sandwiched between two bigger Morgans who always sided against her. People in charge so rarely take responsibility.

At least there was Cadbury. She would see him this afternoon. Cadbury was the puppy that had arrived at Paws and Claws eight weeks ago. His face was the first thing Veronica thought about every morning and the last thing she imagined before she fell asleep at night. All summer she had asked her parents to buy him. They said, “Maybe.” But it turns out
maybe
is just a word that makes parents seem less mean before they say “We’ll see” and other time-stalling things parents say before they finally say “No” and “The discussion is over.” When she had children, Veronica decided, the discussion would never be over.

The idea of Cadbury being sold to people who could never love him as much as Veronica did was a thought worse than death. It was a crime she had to prevent. But first she had to get through her first day at the Randolf School for Girls.

Veronica and her parents waited for the elevator in descending-size order. They were a set. But Veronica didn’t feel she belonged. She needed someone who would see her point of view, a sister. Everyone said having a sibling wasn’t all it was cracked up to be. Take Poppy Greenblatt. She’d been left alone with her little brother Walter for all of five minutes and had accidentally poked his eye out. “Well, of course she did!” Mrs. Morgan had said. “Poor Poppy isn’t the center of her parents’ lives anymore.” Mrs. Morgan always had sympathy for the wrong person in the story. Wasn’t Walter Greenblatt the glass-eyed toddler the tragic character?

The elevator arrived and Mr. and Mrs. Morgan ushered their daughter inside. Veronica’s stomach was in knots. She experimented with her posture, trying to make her uniform look shorter. Mr. Morgan pushed the button for the lobby while her mother fussed with her hair.

“We have got to get you a haircut,” Mrs. Morgan said with a kind of exasperation that Veronica took personally. “Your hair is so long, honey, it just
pulls
your whole face
down
.”

Veronica grimaced. A haircut was not the answer. The answer was a shorter uniform.

The elevator deposited the three Morgans in the lobby and there was Charlie, Veronica’s favorite doorman. “Looking good,” he said. “Today’s the big day!” He smiled and cocked his cap. She loved when he did that. It was like their secret handshake.

“Charlie! You are so sweet!” said Mrs. Morgan. Why was her mother answering people who weren’t talking to her? Obviously Charlie was addressing
Veronica
Morgan, not
Marion
Morgan. Veronica’s finger wormed its way inside a pleat and she gave it a good rub. That was one small virtue about wearing a uniform, she supposed. She could probably rub her finger till it bled and no one would even know.

It was true. Veronica’s father rarely noticed anything. Last year her mother had experimented with dyeing her hair red and it took him three days to comment, and even then he got the color wrong.

“What are you noticing, Marvin?” asked his wife.

“Straight ahead. Isn’t that the same whatchamajig Veronica is wearing?” Veronica and her mother looked, and up ahead, another girl was wearing a Randolf uniform.

“There’s another one,” he said proudly. He pointed to a girl with wavy hair the color of honey. Her uniform was at least as long as Veronica’s. She wasn’t the kind of person Lynn Dehavenon would have considered cool and put together.

“Let’s catch up with her,” Mrs. Morgan said, beginning to run. “Maybe she’s in your class.”

“Mother, please!” said Veronica. But Mrs. Morgan was already halfway down the block.

“How many times do I have to tell her I’m shy?” Veronica asked her father. He knew her predicament better than anyone, but he never stood up for her. Just once Veronica would appreciate her parents taking her side instead of simply reminding her that she was loved. A sister would take her side.

When Mr. Morgan and Veronica caught up with Mrs. Morgan they found her merrily interrogating the honey-haired girl.

“—and how long have you attended Randolf? We think it is the most lovely school!” Which was more awful? Veronica wondered. Your mother trying to make friends for you or a total stranger seeing how crazy your family was? Veronica counted on empathy from the girl but instead all she got was a look entirely void of emotion. Veronica was crushed.

“Veronica,” Mrs. Morgan said, “this is Sylvie. She not only goes to Randolf, as we can tell by her stunning uniform, she’s in your class!”

“Yessir,” Veronica said. It was obvious they were never going to be friends.

At the corner of Ninety-First and Madison her parents asked if she wanted them to come inside with her. They were in front of the little bakery where Mrs. Morgan and Veronica sometimes indulged in chocolate croissants.

“We could at least walk you in,” her father suggested. He gave his daughter’s hand a little squeeze. Were they kidding? If Sylvie didn’t think badly of her before, she had to now. Sylvie wasn’t even walking with one of her parents, let alone both of them. Veronica let go of her father’s hand.

“Have a great day! I love you, honey,” Mrs. Morgan said. She reached over for a hug, awkwardly smashing her purse into the side of Veronica’s backpack.

“Sylvie, not Sylvia. I love you too,” Veronica mumbled. Ugh.

Her parents left together, and Veronica tried to get her bearings. Two girls running toward each other caught her eye. It couldn’t be, but they looked like they were running in slow motion. They were a mirror image of each other in their uniforms and matching bright pink cashmere cardigans. Their cheeks were flushed and their hair gleamed.

“Sarah-Lisa Carver! I love what
you’re
wearing. You must be some kind of a style genius to pair that uniform with that cardigan.” They hugged madly.

They were definitely the kind of girls Lynn Dehavenon would consider cool and put together, but what Veronica envied most was their friendship.

In all the years of being best friends with Cricket Cohen, she’d worried constantly about liking Cricket Cohen more than Cricket Cohen liked her. Whenever she’d brought it up, Cricket always said, “Veronica, you never think people like you.” At which point Cricket would walk away leaving Veronica with the distinct sensation that nobody liked her.