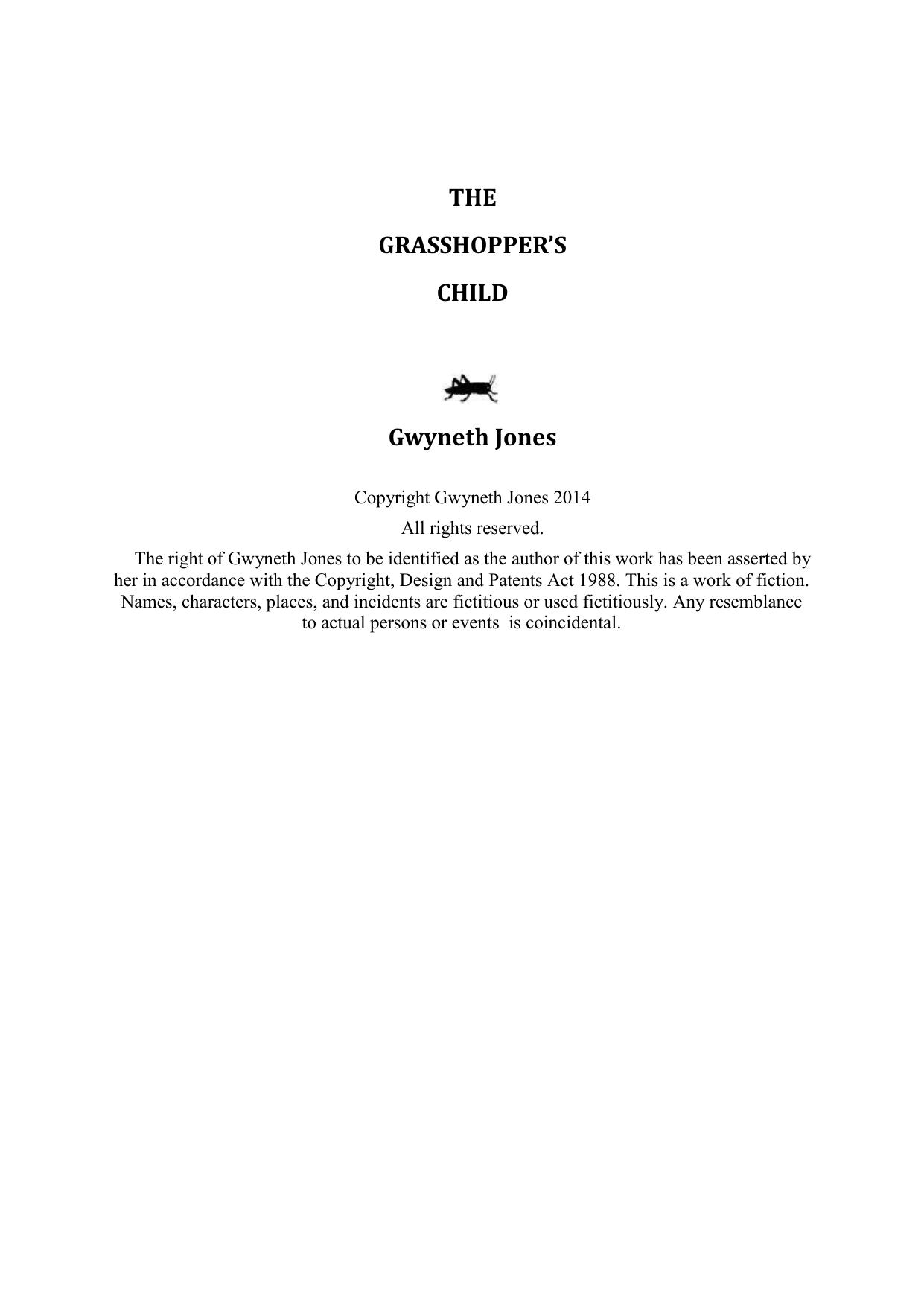 The right of Gwyneth Jones to be identified as the author of this work has been asserted by her in accordance with the Copyright, Design and Patents Act 1988. This is a work of fiction.

Names, characters, places, and incidents are fictitious or used fictitiously. Any resemblance to actual persons or events is coincidental.

3 The Door in the Wall

5 A Traveller On The May

6 The Inspector and the Inquisition

7 The Running Girl and the Hooded Boy

15 The Benefits Of Caring For Our Elders

23 An Evening With The Immortals

The girl waited in a drab hallway, a small rucksack on her back, a suitcase at her feet. The suitcase was big, but battered. It had been bright purple, but the colour was faded and stained.

She was tall, and naturally slim but right now looking skinny and hollowed-out: she hadn't been able to sleep, or eat much, since the terrible thing happened. She was turning the pages of an old children's picture book, called Tales And Fables From Many Lands, a book she'd loved when she was a little girl. She stopped at a picture she remembered well.

The red ant, looking shiny and cross, and wearing an apron, stood in the doorway of its cosy house under a tree-root. It was holding the door just a slice open, and had the middle pair of its six legs folded grumpily. You could see the grasshopper wasn't going to get in.

The grasshopper wore her tattered wings like rags, and huddled her middle legs around her shivering body. Darts of snow were falling on her fast. Heidi held the book in one hand, pushing back a lock of thick, curly black hair that had escaped from its clip, as she read the words on the opposite page. It had always bothered her that they didn't match the picture, but Mum said the picture still told the story. In her mind, she could hear Mum's voice.

The Ants and the Grasshopper

The Ants were spending a fine winter's day drying grain collected in the summertime. A Grasshopper, perishing with famine, passed by and earnestly begged for a little food. The Ants inquired, âWhy did you not treasure up food during the summer?' He replied, âI had not leisure enough. I passed the days in singing.' They then said in derision: âIf you were foolish enough to sing all the summer, you must dance supperless to bed in the winter.'

Virtual Verruca had appeared: a slightly transparent woman in a glossy business suit, with a nipped-in waist, a nipped-in mouth, and an expression that made it clear you weren't going to get anywhere, whatever it was you wanted.

In ways she looked a lot like the ant in the picture.

Her real name was Verushka, or something like that, she was Heidi's Placement Manager.

Her real body would be back at the Angel Care Company's office, sitting at a desk in some big building as shiny as that suit. Heidi had never seen it: she'd only been visited by Verruca the Ghost, here at the Indentured Teens Residential Facility.

Heidi closed the book, put it away with the rest of her entire life, and fastened the battered purple suitcase up again. It would be sent on; she wasn't allowed to take it with her. She took her time, just to annoy Verruca, but she definitely wasn't going to miss this place.

The journey was long. First the Tube (for Heidi: Verruca took a cab); then a train and then another train. Verruca didn't speak the whole time: just pointed a virtual finger when Heidi needed directions. The finger triggered a Wifi impulse that jerked on Heidi's tag, so she had to come to heel like a dog. Another taxi was waiting for them outside the lonely country station. Heidi and Virtual Verruca got in.

Verruca instantly noticed that the driver had flagged-up the massive penalty fare for a single passenger.

âI see one passenger, one ghost,' said the driver calmly. âTake it or leave it.'

A taxi-driver was obviously God out here in the deepest sticks, where nobody had private cars and the trains and buses were few. He wasn't impressed by a talking hologram. Verruca soon gave up the fight, but spent the whole drive bitching under her breath to someone back at the office, about
dysfunctional yokel grifters, who ought to be in Adult Labour Camp
. She looked dysfunctional herself, sitting there muttering and twitching her fingers, with her eyeballs jerking to and fro: like someone dreaming wide-awake. The taxi took them to an empty car-park, surrounded by bare and dripping trees. It was raining quite hard. âThe Gardens are the Property of the National Trust,' said Verruca. âDon't leave the paths.' She vanished.

Heidi trudged alone, along puddled paths coated in sodden dead leaves, directed by spiteful jolts from her tag, until she reached an ugly, yellowish stone building. It had gingerbread-house pointed windows sticking out of the roof, and a row of twisted chimneys.

âThis is your placement,' she said. âFollow me.'

Heidi couldn't follow Verruca, who simply walked through the door. She didn't live in the world of free-roaming mobile avatars. She lived in the miserable, ordinary world that had been left behind.

She located an ancient door-knocker, cold in her hand, and dislodged cobwebs to lift it.
The tongue fell on metal with a harsh, doomy clang.

The old wreck who opened the door wore a grubby floral dressing gown. Her feet were bare, her grey hair was a bird's nest, and her breath smelled of alcohol. She didn't say a word, just turned away and padded off. Heidi's tag tugged her into a big unfurnished front room.

Through the windows she could see the yellowish-stone archway that led to the Gardens, standing alone like the last fragment of a ruined palace.

Virtual Verruca was there, looking disgusted.

âPut the papers in the post,' said Old Wreck.

âYou don't have a scanner? That's not
possible
. What happens to your 3D mail?'

âI never get letters. If I did, I'd get them the old fashioned way.'

Heidi waited, keeping her distance and enjoying Verruca's angry helplessness, until the Angel Care agent gave up saying she couldn't possibly hand over Heidi without a biometric signature âand disappeared. Disconcertingly she reappeared almost at once, right in front of Heidi. âDo what you're told,' hissed the virtual menace. âAnd don't cause any trouble. Just remember. Deadbeats like you and your mum are
very lucky to be alive
.'

Heidi's blood boiled. But she swallowed her spit, ducked her head and nodded. It was disgusting, horrible to say what Verruca had just said. It was against the law. But it was true.

The young girl and the old woman looked at each other.

âAre you sort of fostering me?' asked Heidi, cautiously.

âNo, child,' said Old Wreck. âYour daddy's dead, your mother's in the bin. You're my Indentured Teen. You're being hired out by the loan company to work off your dad's debts.'

âYou mean I'm a slave,' said Heidi (instantly forgetting she must not cause trouble).

Old Wreck laughed, like muddy water cackling in a broken drain. âCertainly not. That would be unthinkable! Indentured means you signed a contract agreeing to work for nothing, of your own free will. Or the government signed it for you, more likely. My name is Tallis Maylock: I don't suppose that brute told you. I'll show you to your room.'

Before she did the terrible thing, Heidi Ryan had been a teen with adult dependents, exempted from Ag. Camp because Mum and Dad couldn't manage without her. Her mum
had schizophrenia âwhich, as Immy, their social worker kept telling Heidi, isn't a disease, it's a name for a bunch of distressing mental health symptoms. Often Mum was disabled, but otherwise fine. Sometimes she was really ill, and had to stay in hospital for weeks. Dad's issues weren't so obvious. Nobody would know he was a BPD (Borderline Personality
Disorder) unless they had to live with him. Basically, Immy said, he was a lovely man and a good dad, but he'd taken too many drugs when he was too young and had nobody to tell him any better, and now he just
couldn't
make decisions. Or pay bills. Or generally look after himself, never mind anyone else. But that was okay, because Heidi was in charge. Or so she thought.

It had been strangely lonely at her Learning Centre after the Agricultural Camps began, and nearly all the teenagers disappeared. Nothing much had changed for Heidi, otherwise.
She'd never been able to go out, or have friends, much: Mum and Dad took all her attention.

Her life was hard, but happy. Like chewing on a rock, but a rock with deep pockets of sweetness. To have people you love who love you back is the best thing in life, and Heidi had that. One day in January she walked home from school in a dream, thinking about a poem.
Heidi was always thinking about a poem. This one was about the young trees that had been planted in her street. How they were like children without coats, shivering under the cold grey sky. Like hopeful children, clinging tight to their tiny buds, dreaming of spending their little bits of pocket-money on green leavesâ

She dumped her bag and wandered into the kitchen. The back door was swinging open.
She shut it, and wiped the smeary doorknob clean, with a resigned sigh. The house was still full of winter daylight. â
Mum?
' she yelled, opening fridge and cupboards, checking to see if they'd eaten or otherwise destroyed the food she planned to cook. â
Dad?
'

She could hear a baby crying. The walls of these houses were cardboard, you could often hear everything that was happening with the neighbours. But the crying seemed to come from upstairs, so she went to see what was going on. Either Mum was crying in a weird way, or she somehow had a baby in the houseâ

Never Say Never (Lakeview Contemporary Romance Book 3) by Melissa Hill
The Polar Express by Chris Van Allsburg
Experiment With Destiny by Carr, Stephen
The Roy Stories by Barry Gifford
The Blackbirds by Eric Jerome Dickey
The Silent Enemy by Richard A. Knaak
Friends Forever! by Grace Dent
Gardener: The Roots Of Ancient Evil by Jacob Mesmer
SV - 03 - Sergeant Verity Presents His Compliments by Francis Selwyn
The Education of a British-Protected Child by Chinua Achebe
Our partner