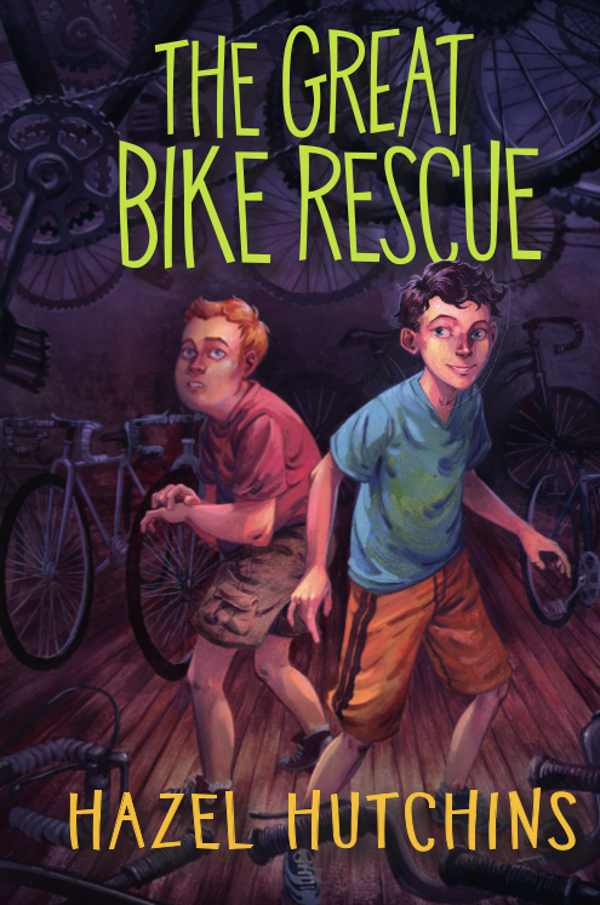 Summary
: Levi and Riley are determined to find out who's behind a recent string of
bicycle thefts after their own bikes are stolen.

Orca Book Publishers gratefully acknowledges the support for its publishing programs
provided by the following agencies: the Government of Canada through the
Canada Book Fund and the Canada Council for the Arts, and the Province of
British Columbia through the BC Arts Council and the Book Publishing Tax Credit.

It only takes a minute for a great summer to turn into something else entirely.

My friend Riley almost spilled his slushie rushing back into the corner store. His eyes were round. His face was flushed. He was in a panic. But it wasn't the fear kind of panic. It was something else.

I was still paying for my own slushie at the counter. And I wasn't worried about Riley. Riley likes excitement. He even exaggerates things in order to have something to get excited about.

The clerk leaned back, his eyes seeking a gap between the sea of ads and posters that were plastered across the full-length windows of the storefront. He squinted as he looked out at the sidewalk.

“A lot of bikes have been lifted from out front lately,” he said.

I had to think about what he meant by the word
lifted
. Lifted up? Lifted over? Suddenly I understood.

“Stolen? You mean someone stole my bike?” I asked.

“It wouldn't be the first time,” he said.

I raced outside. My bike had been leaning against a narrow pillar between the front windows. It wasn't there now. I could see it wasn't there. Riley kept telling me, “See? It's not there, it's not anywhere.” But still, I kept right on looking.

Something inside me started going
thump,
thump, thump
, and a weird kind of energy was taking over.
Do something! Find your bike!
I felt like I was running in circles even though I was hardly moving at all.

I looked up and down Battersby Street. No bike.

I looked in the hidden doorway, the locked one the store doesn't use. No bike.

I looked around the corner. No bike.

I looked at Riley, hoping against hope.

“Nope. I didn't take it,” said Riley. He shoved his slushie into my free hand and began to unlock his own bike from the light post.

“I'll check the alleys and the cross streets,” he said. “Super Riley to the rescue!”

He took off around the corner, pedaling like crazy. I couldn't just stand there! I raced inside and set both slushies on the counter.

I was out of the store before the clerk could answer. I raced across Battersby and headed in the opposite direction from Riley.

I went down the alley
. Look for a thief on a bike.
I ran again
.

Running didn't feel nearly fast enough, but I kept running anyway. Riley would be able to circle around a bigger area, but at least I could cover some of it.

I turned the corner
. Look for my bike.
I ran like crazy some more. Turned another corner
. Run
. I heard the squeak of bike brakes, and Riley pulled up beside me.

Riley shook his head. He'd been riding hard and needed a moment to catch his own breath.

“Nothing,” he said. “I looked everywhere. Whoever took it is long gone.”

He swung off his bike and bumped it up onto the sidewalk. We walked back to the store together. Riley pushed his bike. I
didn't
push mine.

An entire ocean of feelings was washing over me. Disbelief. Outrage. Even a crazy kind of hope as we passed a lady walking a dog and asked if she'd seen a black and silver bike.

And beneath it all, there was a familiar feeling. A
rotten
and familiar feeling. I'd had stuff stolen before. It was four years ago when I was just a little six-year-old kid, even before Riley and I became friends. But he knew the story. I'd told him about it. I guess I'd told him more times than I realized, because it's what he used now to try and cheer me up.

“Well, one good thing,” he said. “At least this time it's not that girl who drove you crazy when you were a little kid. What was her name?”

Emily Grimshaw was the world's sneakiest little kid. She'd lived next door all through grade one. She'd stolen my things. Over and over.

She stole my plastic baseball bat. I saw her using it to whack dandelion heads down at the end of the lane. She stole my kite. I saw her through the chink in the fence, in her own yard, trying to untangle the snarl of string. The list goes on and on. It was all stupid little-kid stuff, but it made me really, really mad. I tried telling Dad, but Emily was way too fast and sneaky to let an adult catch her with anything.

When my toboggan went missing that winter, I knew who had it. I gathered up my courage, knocked on Emily's front door and asked her mom if I could have it back.

“Emily does not steal,” said her mother. “We don't have your toboggan.”

And she slammed the door in my face. Do you know what it's like to be six years old and have an adult slam a door in your face?

The happiest day of that entire year was the day a big green truck drove up and Emily moved away. Except for the fact that I never did get my toboggan back.

“Emily Grimshaw was your nemesis,” said Riley. “She was the Evil Person Who Can Never Be Defeated. It's a good thing it's not her this time. A stolen bike is bad enough without having a nemesis involved.”

I looked at him sideways.

“She did,” I said. “But not that far away. Every once in a while, I still see her hanging out around here. And she still looks sneaky.”

Riley stopped abruptly in the middle of the sidewalk and stared at me. Slowly he raised his fingertips to his forehead.

He was pretending to read my innermost thoughts. Apparently, he figured he could. A slow grin spread over his face.

Riley was right. I
didn't
think it was Emily. As much as she'd driven me crazy back then, things had changed. She lived in a different neighborhood. She went to a different school. The few times we'd seen each other at the park or the pool or the store, we'd ignored each other. She probably didn't even know who I was anymore.

But my bike was definitely gone. Someone had stolen my bike!

It was the first thing the store clerk asked when we went back for our slushies. When I didn't answer right away, he pretty much figured out the answer.

Mystic Memories by Gillian Doyle, Susan Leslie Liepitz
A Pinch of Snuff by Reginald Hill
Sweeter Than Sin by Andrea Pickens
Autobiography of Us by Sloss, Aria Beth
Hermosas criaturas by Kami Garcia & Margaret Stohl
An Anonymous Girl by Greer Hendricks and Sarah Pekkanen
London Noir by Cathi Unsworth
Dreaming the Serpent Spear by Manda Scott
The Lost Sheenan's Bride (Taming of the Sheenans Book 6) by Jane Porter
Don't Look Back by Kersey, Christine
Our partner