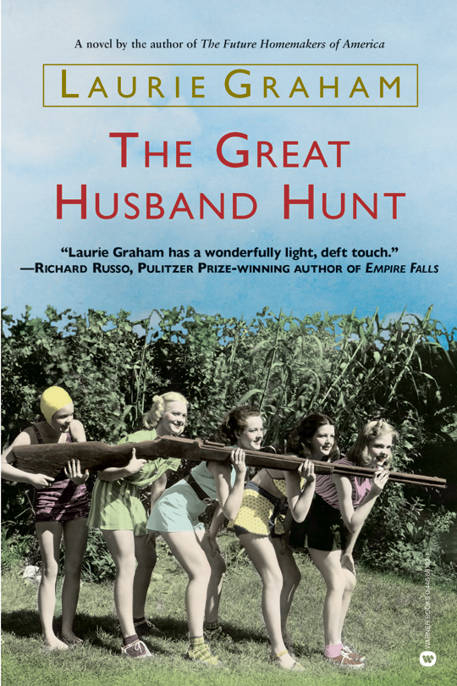 This book is a work of historical fiction. In order to give a sense of the times, some names or real people or places have been included in the book. However, the events depicted in this book are imaginary, and the names of nonhistorical persons or events are the product of the author's(') imagination or are used fictitiously. Any resemblance of such nonhistorical persons or events to actual ones is purely coincidental.

Ma was propped up with extra pillows.

Her night table was cluttered with various bottled remedies, her little helpers. I could see she had been crying. I suppose she could see I had been too. She patted the bed beside her.

“What a blessing I have you, Poppy,” she said. “If you had been as favored with beauty as Honey you'dy soon make a good match and then what would I do, left all alone in the world?”

I opened my mouth to say I didn't think Honey was all
that
favored with beauty, but Ma was getting into her stride.

“But it's so clear to me now,” she continued. “I was given a beauty for the consolation her children will bring me, and I was given a plain one for companionship in my old age. How wise Nature is!”

I said, “Does this mean I don't have to go to Cincinnati for a new nose?”

“The nose is canceled,” she said. “And the singing lessons and the French and the cotillions. There's no sense in exerting ourselves in that direction anymore.”

The great husband hunt had been called off.

PRAISE FOR
THE GREAT HUSBAND HUNT

“An irrepressible adventurer, Poppy is a comic combination of innocence and pluck, but although this is a brisk, breezy read, it's also a novel with serious bite.”

“A combination of stealthy nostalgia and tender comedy…she writes with pathos—a quality that is rarely taken seriously nowadays, perhaps because it usually relies on a quality of innocence for its effect.”

“It's the insight it offers into changing personal attitudes and family life during this turbulent period that makes it such a fascinating read. The central character is delightful and the characters she encounters are both accurate and colorful.”

“Laurie Graham is a writer with a remarkably malleable comic voice.”

The Future Homemakers of America

It was just as well I had ripped off my Ear Correcting Bandages. Had I been bound up in my usual bedtime torture-wear, I would never have heard my mother's screams.

The bandages were part of my preparation for the great husband hunt. I was only fifteen years old, but my mother recognized a difficult case when she saw one. She had taken up the challenge the day after my twelfth birthday and never spared herself since.

And so, assisted by my aunt, she began an all-fronts campaign to catch me a worm.

I was forbidden candy and other waist-thickening substances. I was enrolled for classes in piano, singing and cotillion dancing, and spent an hour every day in a backboard, during which I practiced French pronunciation whilst a series of Irish maids tried to straighten my hair, or at least, defeat its natural wiriness into the kind of soft loose curls preferred by husbands.

On alternate days my neck was painted with Gomper's Patent Skin Whitener, to coax out of it a certain oriental tinge. The label advised using the paste no oftener than once a week. But as my mother said, what did they know? They hadn't seen my neck.

As to my nose, she knew the limits of home improvements. I was to go to a beauty doctor in Cincinnati, as soon as I was sixteen, and have a little cartilage shaved off.

Meanwhile she applied herself to the correction of my protruding ears. She designed an adjustable bandeau to hold them flat against my skull while I slept and had the Irish girl make them up for me in a selection of nightwear colors.

“So you can choose, you see?” Ma explained. “According to your frame of mind.”

And, gauging my frame of mind all too well, my aunt informed me that some day, when I had grown in wisdom, I would be grateful for their efforts.

The alternative to all this was that I would be left an old maid.

I knew what an old maid was. My cousin Addie was being one up in Duluth, Minnesota, riding around all day with her dogs and not wearing corsets. And I knew what marriage was too. My sister Honey had recently married Harry Glaser and as soon as the marrying was done she had to leave home and put up her hair. As far as I could see she wasn't allowed to play with her dolls anymore, and she had hardly any time for cutting out pretty things for her scrapbook. She had to go to tea parties all the time, but never appear too eager about cake, and whenever she came to call Ma would make mysterious inquiries.

“Honey,” she'd whisper, “how are Things? Are you still using the Lysol?”

To avoid the fate that had befallen Honey, I decided on stealthy sabotage rather than outright rebellion. As long as things
appeared
to be satisfactory my mother took them to
be
satisfactory. Surface was her preferred level. Hidden depths were unattractive to her, therefore she behaved as though they did not exist. So, every night, I took off my ear correctors, but only after the house had fallen dark and silent.

Then, that night, someone came to the front door and rang the bell with great persistence. I thought it had to be a stranger. Anyone who knew us knew the hours we kept. They knew our disapproval of nightlife and lobster suppers and men who rolled home incapable of putting a key neatly in a keyhole.

I heard the Irish slide back the bolt, eventually, and voices. And then, leaning up on my elbow, holding my breath so as not to miss anything, I heard my ma scream. This signaled excitement. The late visitors were Aunt Fish and Uncle Israel Fish, come straight from the opera, still in their finery, because they had seen newsboys selling a late extra edition with reports of a tragedy at sea. “At sea” was where my pa was, sailing home from Europe.

Aunt Fish was my mother's sister and she always seemed as at home in our parlor as she did in her own. By the time I had pulled on my wrapper and run downstairs she had already arranged Ma on a couch and was administering sal volatile.

“Are you sure he sailed, Dora?” she kept asking, but my mother wasn't sure of anything. “Maybe he didn't sail. Maybe business kept him in London.”

My father had been in Berlin and London, inspecting his subsidiaries.

Uncle Israel was stretched out with a cigarette.

“Nothing to be done at this hour,” he said. Aunt Fish turned and looked at him.

He left immediately. And my mother, released from the constraints of being seen by her brother-in-law dressed only in her nightgown, collapsed anew.

“Poppy,” said Aunt Fish, “don't just stand there. Be a comfort to your mother.” And so while she plagued the Irish for a facecloth soaked in vinegar, and more pillows, and a jug of hot chocolate, I stood by my mother's side and wondered what kind of comforting to do.

I tried stroking her arm, but this appeared to irritate her. I looked at her, with my head set at a compassionate angle, but that didn't please her either. I was altogether relieved when Aunt Fish returned from harassing our help and resumed her post as couch-side comforter.

I said, “Aunt Fish, is Pa lost at sea?” and Ma resumed her wailing.

“Poppy!” said Aunt Fish. “Don't you have even an ounce of sense? Your poor mother has received a terrible shock. If you can't be quiet and sensible, then please return to your bed.”

I'm sure it wasn't me that had rung the doorbell in the middle of the night with news of shipwrecks.

“And send the Irish in, to build up the fire,” she shouted after me.

We had stopped bothering with names for our Irish maids. They never stayed long enough to make it worth learning a new one.

“And Poppy,” my mother called weakly, from her couch, “don't forget to strap down your ears.”

I lay awake, waiting to hear Uncle Israel's return, but eventually I must have dozed, and then it was morning. But it was not like any other morning. Our family was suddenly part of a great drama. The first edition of the
Herald
reported that though Pa's ship had been in a collision, all hands were saved and she was now being towed into Halifax, Nova Scotia.

Aunt Fish returned, having changed into a morning gown, and then Uncle Israel, with news that the White Star Line was chartering a train to take relatives up to Halifax to be reunited with their loved ones.

I said, “I'll go. Let me go.” This provided my aunt with further reasons to despair of me.

“For heaven's sakes, child!” she sighed, and Uncle Israel winked at me.

“Out of the question, Pops,” she said. “Too young, you see. But why not write a little note? I'll see he gets it as soon he sets foot on land.”

“There's no need for you to go, Israel,” my mother said. The morning's brighter news had restored her appetite and she was eating a pile of toast and jam. “I can always send Harry, if it isn't convenient to you.”

“Of course it's convenient,” said Aunt Fish. “It's Israel's place to go.”

I went to the escritoire and started composing my letter to Pa, but I was still more haunted by the idea that he might have drowned than I was uplifted by the prospect that he was safe. I had no sooner written the words “Please, never go away again” than I burst into inappropriate and inconsiderate tears and was sent to my room.

Soon after, my sister arrived with her husband. Honey came up to my room and lay on my bed beside me.

I said, “Why did he have to go across an ocean, anyhow?”

“Why, because that's what men do,” she said.

I said, “Would you allow Harry?”

“Allow?” she said. “It isn't my place to allow. Besides, I know everything Harry does is for the very best.”

I had often suspected that marrying had caused a softening of Honey's brain.

Uncle Israel left that afternoon on the special train to Halifax. And Harry went downtown, first to his broker with instructions to buy stock in the Marconi wireless company whose wonderful shipboard radio had helped save so many lives and bring comforting news to the waiting families. Then he went to the White Star offices to inquire when the passengers might be expected back in New York.

The Lovely Chocolate Mob by Richard J. Bennett
El dador de recuerdos by Lois Lowry
My Name Is Not Jacob Ramsay by Ben Trebilcook
Who Left that Body in the Rain? by Sprinkle, Patricia
Mackinnons #02 For All the Right Reasons by Coffman, Elaine
Tyrant: Destroyer of Cities by Christian Cameron
Shock Point by April Henry
London Lace, #2 by Martine, Catou
The Perfect Match by Unknown
The Best American Sports Writing 2014 by Glenn Stout
Our partner