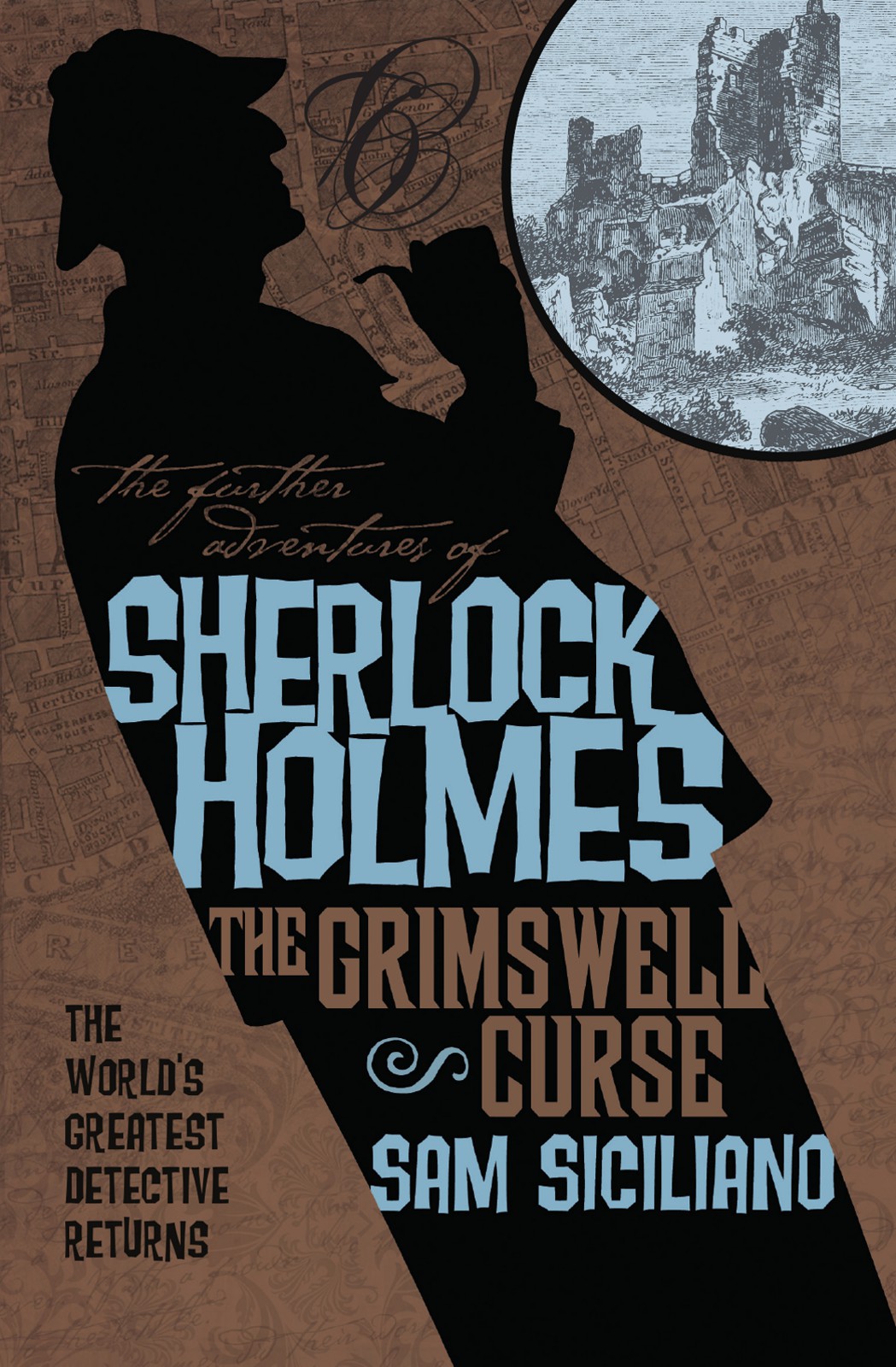 THE WAR OF THE WORLDS

THE SCROLL OF THE DEAD

THE MAN FROM HELL

SÉANCE FOR A VAMPIRE

THE GIANT RAT OF SUMATRA

THE STAR OF INDIA 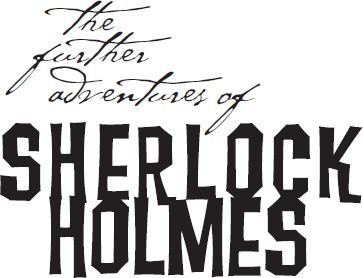 THE FURTHER ADVENTURES OF SHERLOCK HOLMES: THE GRIMSWELL CURSE

What did you think of this book? We love to hear from our readers. Please email us at:
[email protected]
, or write to Reader Feedback at the above address.

To receive advance information, news, competitions, and exclusive offers online, please sign up for the Titan newsletter on our website:

My life has been graced by an arc of remarkable women, all of them strong, beautiful, intelligent and creative: my mother Peggy, my wife Mary, and my daughters Mara and Gina. Traits from my wife and mother, especially, always seem to creep into my heroines. This book is dedicated to the four of them.

S
herlock Holmes drummed with the long fingers of his right hand upon the dark sill of the bow window overlooking Baker Street. He wore the ubiquitous male garment of the times, a black frock coat, its woolen lengths falling almost to his knees, his thin silhouette framed in gray, dreary light. His shoulders had a weary slump.

“When one is bored, time crawls by as slowly as a slug or snail.”

I said nothing but reflected (even as my cousin probably did) that a year had passed since the tragic case involving Donald and Violet Wheelwright had commenced, the latter being a person I knew was much on his mind.

“The empty bank vault in Geneva furnished only a trivial diversion, and since then...”

“The weather does not help matters.” I extended my legs so my boots were nearer the coal fire. “Autumn can be pleasant enough, but no sooner does the first rain of November come, than the stench of coal is everywhere. During the summer one completely forgets the wretched soot and noxious yellow fog. Of course, during the summer one is treated to the fine, dried and powdered manure from several thousand horses, but even that is preferable.”

Holmes turned with a sharp laugh. “I see you are in equally fine spirits. I have been contemplating some travel, perhaps a voyage to a faraway and exotic locale—the Khyber Pass, a remote Japanese village, or an island in the South Seas.”

“Why not accompany me?”

“You know how wretched I grow if I am apart from Michelle for more than a few days, and even if you were willing to put up with us both, she would never leave London now. Her practice thrives more than ever, and she has become both well known and fashionable. It would be impossible to bear were she not so genuinely excellent a doctor and so loving a wife.”

Holmes went to the mantel, raised the humidor lid and withdrew a cigar. A faint smile pulled at his thin lips, but his gray eyes stared briefly into space. “I envy you your chains, Henry.” He held ready a cigar cutter even as a rap sounded at the door. “Yes?”

Mrs. Hudson appeared in the opening, her face pink, her hair white, and her eyes blue. “A gentleman to see you, Mr. Holmes.”

“Ah, excellent! Send him in at once. Let us pray, Henry, that at last an interesting case has come knocking at my door—that ennui will be briefly banished.” He put the cigar back with its brethren untouched.

I stood up as the tall stranger entered. His dress marked him as a gentleman, an extravagant one of considerable means, but with peculiar taste. His frock coat was superbly tailored, the woolen fabric with a soft luster glistening faintly from the rain, but the dark green shade was quite unusual. His silk top hat was of the same color, and his tie was a green and navy stripe with a glistening pearl midway between the knot and his black silk waistcoat. His wool trousers were of a very fine black and green stripe, his shoes and gloves a peculiar yellow-orange leather. Upon his silken lapel was a green carnation.

“Mr. Holmes? Frederick Digby, younger son of James Digby, the Marquess of Hampsford. Quite a pleasure meeting so esteemed a person as yourself.”

Digby’s face was pale, thin, with washed-out blue eyes and an insubstantial, reddish-brown mustache, the ends so neatly trimmed it was exactly even with the upper edge of his lip. He removed his top hat and a glove. His hands had obviously never seen a day’s work, and but for the reddish hair above the knuckles, the long delicate fingers and white skin would have made a maiden envious.

Holmes shook his hand, then turned to me. “Lord Frederick, this is my cousin, Doctor—”

“Ah!” exclaimed Digby, his languid eyes opening wide. “So this is the famous Doctor Watson—your Boswell, Mr. Holmes!” His hand was faintly clammy, but he shook mine eagerly. “I have read every word of yours, Doctor Watson.”

I could see from the wicked gleam in Sherlock’s eyes that he would be of no help; he found it terribly amusing when I was mistaken for Watson.

“I hate to disappoint you, Lord Frederick, but I am Doctor Henry Vernier, Mr. Holmes’s cousin.”

“Henry and I are on the best of terms, Lord Frederick, and I value him every bit as much as Doctor Watson. Perhaps a trifle more,” he added dryly. “Sit down before the fire and warm yourself.”

“Don’t mind if I do. Beastly weather out there.” He sat in the wicker chair, which was the place of honor. “You’ll pardon me, gentlemen, if I’m a bit flustered. I hardly know where to begin.”

Holmes leaned forward in his chair, elbows on his knees, a playful smile on his lips. “Your discomposure is understandable. Perhaps it has something to do with the rather tall young lady who embraced you so passionately.”

Digby’s hat tumbled out of his lap. “Oh, I say—that’s very good, Mr. Holmes! Very good indeed, just the thing. Old Watson wasn’t making it up after all. Tell me how you guessed. I’m all ears.”

“I am sorry—deduced—I meant deduced.”

“Your green carnation is in a sad condition, no doubt as a result of having been nearly crushed by the force of the lady’s embrace. Her... chest must be at the same level as yours, for she would not knowingly press her face into the blossom.”

Digby glanced down at the carnation and fingered a petal. “Yes, it is in a rather sorry state, isn’t it? But how do you know it was a young lady and not my dear old mother, for instance?”

“Mothers, although ardent, are cautious. They would not willingly spoil a delicate flower.”

Digby nodded. “Yes, Mr. Holmes, that is very good indeed.” He hesitated, then his nostrils flared slightly, his eyes widening, as he toyed with the end of his mustache. “How do you know, though, that it wasn’t a tall young man?” A smile twitched his lips.

Holmes’s gray eyes glanced briefly at mine, even as his dark brows rose. My own jaw dropped slightly. “What is that supposed to mean?” I asked truculently.

Digby laughed in earnest. “Oh, I am sorry—you must forgive me, old thing. I will have my little joke. Wanted to see if I could ruffle Sherlock Holmes’s feathers—couldn’t resist it. A beastly habit, I know—ought to be ashamed and all that. You were absolutely right, Mr. Holmes. A young lady did embrace me passionately. I feared briefly she might crush me. And she’s the problem—the reason I came to see you.”

Holmes continued smiling, but I could see dismay in his eyes. He had hoped for a spectacular case, something bizarre and sensational, but so far he had only this young dandy and his affair with some young lady who was probably equally offensive.

“You see, Mr. Holmes, I have been engaged to Miss Rose Grimswell, a charming girl and an old chum. Rose and I have known each other for years. I knew her when she was still in short frocks. Anyway, dear old Rose and I decided to hitch our wagons or however they put it about six weeks ago. Some consider her a bit on the odd side, what with her unusual looks and all that poetry and music, but I want a wife with some gray matter under the skull. Anyway, the wedding was on for next June, and everything was rosy—no pun intended—until recently, and now she’s gone and called the whole thing off!”

Holmes’s disappointment must have been obvious even to Digby, but he tried to mask it. “Surely... the lady must have given you some reason.”

Digby was silent, his lips pursing. “She... She let something slip, blurted it out. Said her father won’t allow it.”

THE SCARECROW RIDES by Russell Thorndike
Takedown Teague (Caged #1) by Shay Savage
Demon Blood by Brook, Meljean
Bearly a Chance: A Second Chances Romance by Hart, Alana, Barron, Sophia
In Bed with a Spy by Alyssa Alexander
Takedown by Brad Thor
Luck of the Draw by Kelley Vitollo
Unwrapped by Melody Grace
Sunset Limited by James Lee Burke
The Sons of Satrina: A Sons of Satrina Novel by Kristan Belle
Our partner